Just for a nudge there are 16 consecutive posts about Yorkshire in the Pickled Egg Quiz thread starting from:

There is Parmo, which deserves a mention as the culinary delight from Middlesbrough.
I confess to never having sampled its delights. It is often described as somewhere between manna and dogshit. Telling, as I searched for Parvo before realising the incorrect spelling.
Top

mickthemaverick wrote: ↑
13 Jun 2022, 11:15
Just for a nudge there are 16 consecutive posts about Yorkshire in the Pickled Egg Quiz thread starting from:

Not looking backwards to misplaced nosalgia about horrendous air pollution, and the steel industry you would hope. If Teesside doesn't grab a big slice of the new energy opportunities, it isn't really trying. Plenty investment "in the pipeline".

Sabic said the investment would include strengthening operations at Teesside and making its site "one of the world's lowest carbon-emitting crackers".

Wonder if BP will let them pipe excess CO2 down their "Blue Hydrogen Carbon Capture and Sequestration Pipe" out under the North Sea.

bp...is developing plans for the UK’s largest blue hydrogen production facility, targeting 1GW of hydrogen production by 2030. The project would capture and send for storage up to two million tonnes of carbon dioxide (CO₂) per year, equivalent to capturing the emissions from the heating of one million UK households¹.

myglaren wrote: ↑
13 Jun 2022, 11:48
There is Parmo, which deserves a mention as the culinary delight from Middlesbrough.
I confess to never having sampled its delights. It is often described as somewhere between manna and dogshit. Telling, as I searched for Parvo before realising the incorrect spelling.

A Wiener Schnitzel au Gratin avec sauce béchamel by any other name would taste as sweet.

Saltburn is nice. Never been to Staithes (Steers) despite my mother's side of the family originating there.
I did work just outside Staithes, a couple of miles only, at the Baulby potash mine, now used as a neutron detector.
Top 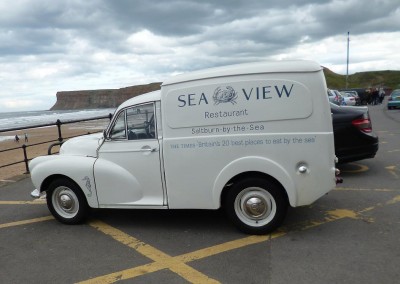 More culinary delights from the North East Corner of Yorkshire. Who would have thought it few years later the humble chip shop with a sitty-down bit with a view, would be graced by the presence of not only bake-off winner Nadiya Hussain, but also the ever pleasant and enthusiastic Fred Sirieix sampling a crab brioche with fries

I did work just outside Staithes, a couple of miles only, at the Baulby potash mine, now used as a neutron detector.

I've been down the mine at Boulby, jeez that was hot down there

At the time I wondered why they gave you hi-vis underwear to wear. As soon as you get underground the hi-vis boiler suit got undone all the way so you could attempt to keep cool. A fascinating site - the pan of potash is continuous and rises in Germany, Merkes mine being one site 'over there' where they mine it

Still in the north-east corner, Saltburn By the Sea, was also a pioneering venue for those who wanted to go faster in motor vehicles. several land speed records set there on the sands.

Very interesting account of Saltburn's heady days when 60,000 people would attend the record attempts, with tales, and pictures including of Lee "Algy" Guinness the brewery heir and Malcolm Campbell.

Couple of very short films of the type of vehicles both on the beach and ticking over in the car park.

Obviously if you choose to visit Saltburn, occasionally it will be overcast windy and damp.

Compulsory walk along the pier, and use of the cliff railway

The Station has a reasonable presence

Go on have a try, it wont hurt and there's the best part of 24 hours to go

Best I could do.

Many decades ago, someone fairly high up in the government had a bad time in Yorkshire. Whether it was because they were spurned by their lover, whether it was because they got a parking ticket up there, or whether it just rained all during their holiday has been lost to the mists of time, but so annoyed by this event were they that they decided to try and get their own back in a rather dramatic way. They decided to make the North York Moors a major nuclear target and they stuck the BMEWS site up there at Fylingdales. "That'll teach them" they thought. "First sign of war and the Soviets will flatten the place."

But alas, it was not to be

But the government bod wouldn't give up so easily. He hatched a plan. If the Russians won't do it, then I'll do it...... Someone actually came up with a plan to let of a nuke or two underground just over 5 miles away on the North York Moors

Thankfully, common sense prevailed, but it was actually a plan at one point

Down County to Thirsk now, pretty well known for the right-hand Blue Plaque recording James Alfred White's home and workplace, but not mentioning the Birmingham City Goalkeeper from whom he selected his pen name and character name.

Maybe not so well known for the Thirsk connection outlined in the left hand plaque with Lords Cricket ground, the home of Cricket.

My dad worked at Fylingdales BMEWS and I worked there a bit under contract, not MOD.

It was fun watching him get picked up by helicopter in the hospital field at the end of our street when the roads were blocked by snow.

I was most impressed by the huge antennae swishing back and forth with barely a sound, just the rush of air through them, they moved surprisingly quickly.
Also the 'flame' through the waveguides. There were glass portals to see inside and there was a strong purple flame coursing through them.

A mate worked there too, on the computers. He was alone there one night and set one of the computers to calculate Pi to as many figures as it could. It was dot-matrix printout and the stack of fanfold paper was about four feet high when he had to terminate it for the next shift coming in.
I think it would have been a long time before he saw daylight if they had cottoned on to him.
Top

Right at the edge of the former West Riding of Yorkshire towards the former Westmorland we have Sedbergh. Has one of those boarding school things which just so happens to have a cricket pitch of a standard to host First class County Cricket matches on.

When I say Jimmy Anderson took his 950 th First Class Wicket bowling for the home side, it wasn't Sedbergh's historic county or its current county post 74 that were the hosts of the match.

NewcastleFalcon wrote: ↑
22 May 2020, 11:48
When we were in Sedbergh last year, although in Cumbria now, (Yorkshire pre 74) Will Carling's old School was hosting a Lancashire County Cricket match against my home County of Durham in the County Championship.