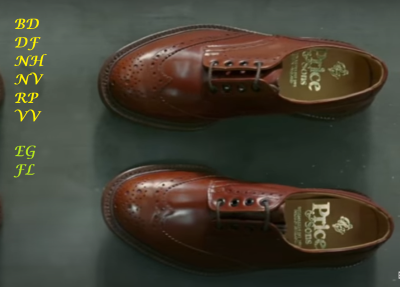 and here is our example for today, bog standard, peoples car, still going...

I was just going to include 1 but this also popped up and its a very old reg 1931 Soke of Peterborough. Pic would also count for a Derbyshire day in the spotlight as its from the Crich Tramway Museum.

Sussex flag is a natural scene:

A map of Sussex as it was before the East - West split is not easy to find for some places but this will help:

For the purposes of the 92 Counties we are covering in the thread the wikishire interactive map of the Historic Counties of the UK is our guide, don't think it throws up too many anomalies for Sussex.

As a very active member of the North West London (NWL) group of the CSMA I had the pleasure of taking a team down to Brighton every summer to play a Stoolball match against the CSMA Headquarters team who were based in Brighton. It was a great day out every year with the match invariably followed by a jovial evening in a local hostelry. The game itself is a very traditional sport which originated in Sussex and is basically a cross between cricket and rounders. You can read all about it on the wiki page here.

Players in the park:

That's the unofficial motto of Sussex

It's been in use for somewhere between 100-200 years and "The motto asserts that people from the English county of Sussex have minds of their own, and cannot be forced against their will or told what to do. It is used as a motto of the people of Sussex and the Sussex Bonfire Societies" https://en.wikipedia.org/wiki/We_wunt_be_druv

It's also used on the labels for Harvey's Beer - Harvey's being a brewery in Lewes.

We wunt be druv - own work

Harvey's beer was also the subject of a stand-off between the Greene King brewery and some rather upset Lewes locals.

"Harvey's brewery, which has been producing beer since 1790, is situated approximately half a mile from the pub and is a major local employer. The 220-year-old pub in the centre of the town had been acquired by Greene King in 1998. The seasonal Harvey's ales were withdrawn in 2004, but the Best Bitter remained on sale because of its popularity - selling four times as much as Greene King's standard cask ales. The company's decision to finally withdraw the Best Bitter turned into a public relations disaster.
A petition of 1200 signatures was collected. The mayor of Lewes and the then Lewes MP Norman Baker spoke out against the withdrawal.
Following the withdrawal, the regulars of the pub staged a well-publicised boycott with a regular vigil outside the pub at peak times to explain the situation to casual visitors, which resulted in an estimated loss of trade of 90%. The campaign was covered on the internet and the licensing trade press including The Publican and the Morning Advertiser prompting a wider discussion about the power of the larger brewers over consumer choice. It gained national coverage in The Guardian, The Mail on Sunday, The Financial Times, BBC Radio 4's Today and You and Yours programmes, Private Eye, The Observer and the Evening Standard.
After a 133-day boycott, a highly critical article in The Guardian and a corporate reorganisation in March involving the departure of Mark Angela as the head of the managed house operations, the company announced on 20 April 2007 that it would reinstate a range of Harvey's ales at the Lewes Arms. In what The Independent described as a "humiliating climbdown" chief executive Rooney Anand admitted that the company had greatly underestimated the depth of feeling about its initial decision, saying "The Lewes Arms is a very special local pub with a unique place in the life of the town ... the decision to return Harvey's to the bar is the right one"
https://en.wikipedia.org/wiki/Lewes_Arms_controversy

Lewes is also the location for the annual festival of pyromaniacs and minor injuries - AKA Lewes Bonfire night.
"Lewes Bonfire, or Bonfire for short, describes a set of celebrations held in the town of Lewes, Sussex, England, that constitute the United Kingdom's largest and most famous Bonfire Night festivities, with Lewes being called the bonfire capital of the world."
https://en.wikipedia.org/wiki/Lewes_Bonfire

So an early strike for Sussex from me, just down from Lewes

Newhaven to Dieppe was my ferry of choice for kicking off an inter-rail holiday around Europe in 1981, and later for our first family motoring holiday to France in a MkII Fiesta. Didn't stray too far stayed in Normandy.

Cant remember the name of the ferry but it was probably a Sealink branded one at the time and no doubt appears on this compilation of the Newhaven Ferries from 1816 to 2012.

The High Street contains one of the longest continuous runs of 14th-century timber-framed buildings in England.!

A good reason to find out where this is:

Not far from the strange people of Lewes

Although never formally confirmed, it has long been assumed that the locations in Trumptonshire were based on Plumpton, Wivelsfield Green, and Chailey.
"The true locations on which the fictional communities were based remain uncertain. According to Murray, the three title communities are however based on real locations one and a half miles from each other at the corners of an equilateral triangle. The real-life locations most frequently cited are Wivelsfield Green (Camberwick Green), Plumpton (Trumpton), and Chailey (Chigley), historically known as Chagley, which are neighbouring communities in a roughly triangular configuration in East Sussex. In such an explanation the city of Wellchester could be Chichester."
https://en.wikipedia.org/wiki/Trumptonshire

Another fictional location that only exists in people's minds is that of Walmington-on-Sea - the fictional setting of Dad's Army. The only clue to its exact location being that its nearest large town is Eastbourne. 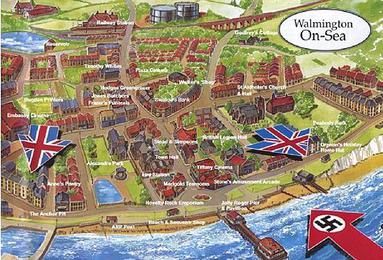 mickthemaverick wrote: ↑
08 Jun 2022, 18:04
The High Street contains one of the longest continuous runs of 14th-century timber-framed buildings in England.!

A good reason to find out where this is: 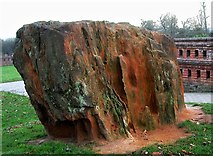 © Copyright Patrick Roper and
licensed for reuse under this Creative Commons Licence.

I have friends who live in Peacehaven and they bought their house unaware of its slightly special status. In learning about the area, where they have been for over 25 years, they discovered that the Greenwich Meridian actually passes through their property. They were aided in this research by the actual Meridian Monument which marks the point where the Meridian crosses the coast:

You can read about Peacehaven here.
Top

Not far from Walmington-on-Sea, is Bexhill-on-Sea with it's fine De La Warr Pavillion which is now an arts centre.

Strange but true - Bob Marley had his first UK appearance there. Possibly even stranger - the promenade along the front hosted the country's first ever motor race

Not strange, and probably not even interesting - the world's oldest spider's web was found in Bexhill - 140million years old and encased in amber

Talking of pavillions we must at least mention the Royal Pavillion. I liked this reflective picture best from the hundreds available:

Read all about here.
Top 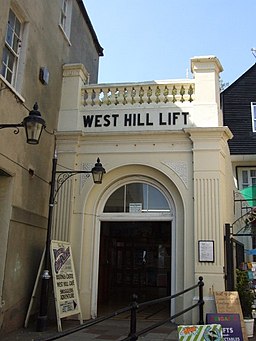 And the East Hill Cliff Railway 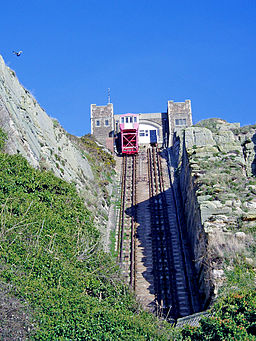 ) built the first ever TV in Hastings