Heat Pumps, One for the engineers

Dormouse wrote: ↑
02 May 2021, 13:08
In this set of diagrams I wish they would use a pale green/blue for the ambient air temperature comparison to the darker blue of the colder return after the expansion phase. Most people can't get their head around taking heat from "cold" - the outflow temperature is lower than the outside ambient temperature and hence you can take heat frhttps://frenchcarforum.co.uk/forum/posting.php?mode=quote&p=684451#om the "cold" outside.

I think the second video I posted up, definitely added more detail and better animation, and covered all the common types of system.

myglaren wrote: ↑
02 May 2021, 11:20
We had a large chest-freezer in the 'utility' room and another upright in the kitchen. Wife's idea.
We used to buy meat in bulk - a lamb, half a pig, half a 'beast' (cow).
Initially expensive but she would portion it out and freeze most of it. Spend the weekend cooking and baking and freeze a fair bit of that too.
Didn't need to do much shopping, only fresh veg, butter, eggs etc. There was enough food to survive for ages but the main thing was the baby dinners for the small ones.
She was wary of commercial baby food, partly due to preservatives and E-numbers that were heavily criticised at the time, and also some nuts going around contaminating baby food - broken glass etc.
She knew exactly what was in her baby meals and was happier with that.
Not least was the savings on food, bulk buying meat was actually far cheaper than buying it piecemeal.

The freezer kept that room reasonably warm in winter and her cooking non stop over the weekend kept the rest of the house warm too - she insisted on a slow-cooker double oven that ran all night too.
Which reduced the heating bills and also the gas bills as there were many items being cooked at the same time. Hard work for her but she revelled in it and there was always fresh bread and cakes, no need to buy any.
Smart woman. Learned a lot from her.

My wife did this kitchen magic heating/mass twin freezer trick and, to a lesser degree, we still do in our modified "retirement home". It is amazing how much heat comes from cooking. Using proper cooker hoods and designing your home to suit means you avoid chucking all this heat out the kitchen window. We can often sit in the lounge with absolutely no extra heating on.
Top

I agree that the animation is a better presentation of the facts than some I have seen but, over the years, it has been portrayed as "free" heat, which it isn't, and marketing has hidden the nitty gritty of the actual systems. Solar panels have suffered from the same marketing hype and many people are put off when their reality doesn't match the claims being made (or the money being extracted from their wallets and not coming back as returns on their investment) Most people are only aware of the glossy adverts- not like the people here who want to get the whole story.
Top

Don't get me wrong here. I think heat extraction pumps are a good idea and nearly installed a ground heat recovery grid system along with our septic tank soak away system over 30 years ago when we built our last house. It is just that the reality of these things, and the consequent under specifying, leads to delusion and scepticism which makes their uptake more difficult to sell to the public. A system that will work perfectly well in York isn't going to work as well in the middle of the Fells in the height of winter even if both houses are identical in every respect. And god help you if you live somewhere like Braemar for winter heating. Our old house was just a few miles from The Cairn O' Mount road that took us over to Braemar. The Cairn O'Mount road is notorious for frequently having it's snow gates shut. Yet we still reckoned Ground Source would work, properly designed.
Top

Dormouse wrote: ↑
02 May 2021, 13:17
My wife did this kitchen magic heating/mass twin freezer trick and, to a lesser degree, we still do in our modified "retirement home". It is amazing how much heat comes from cooking. Using proper cooker hoods and designing your home to suit means you avoid chucking all this heat out the kitchen window. We can often sit in the lounge with absolutely no extra heating on.

While I rarely use our lounge any more, I could sit in there with the heat off and a window open.
The heat from the TV and the stereo could be overpowering. I ran the sound through the stereo when watching the TV (DVDs only, don't watch TV as such).
Even just one of them keeps it comfortable.
Top

If anyone wants a spectacular viewpoint on a road trip then the Cairn O'Mount road has it all. Strongly recommend the area. Much under promoted for touring. Less midges than the West of Scotland too.
Top

We use all of our ground floor and our rear Sitootery that leads onto a veranda. The rear porch takes the heat from the kitchen too and we can sit there most times of the year without extra heating being on. It is designed with all the insulation it needs for all year round use. That is what we concentrated on - insulation, and controlling heat losses and it has paid off.
Top

NewcastleFalcon wrote: ↑
30 Apr 2021, 09:47
Gas Boilers are soon to become persona non grata, and go the way of the internal combustion engine. The only alternative purported is either direct electric heating or heat pumps ground and air source, together with better insulation.

So what do I know about heat pumps. Not very much and its probably all wrong. Here is a back of a postage stamp summary of my current little knowledge thinking.


This is a heat pump 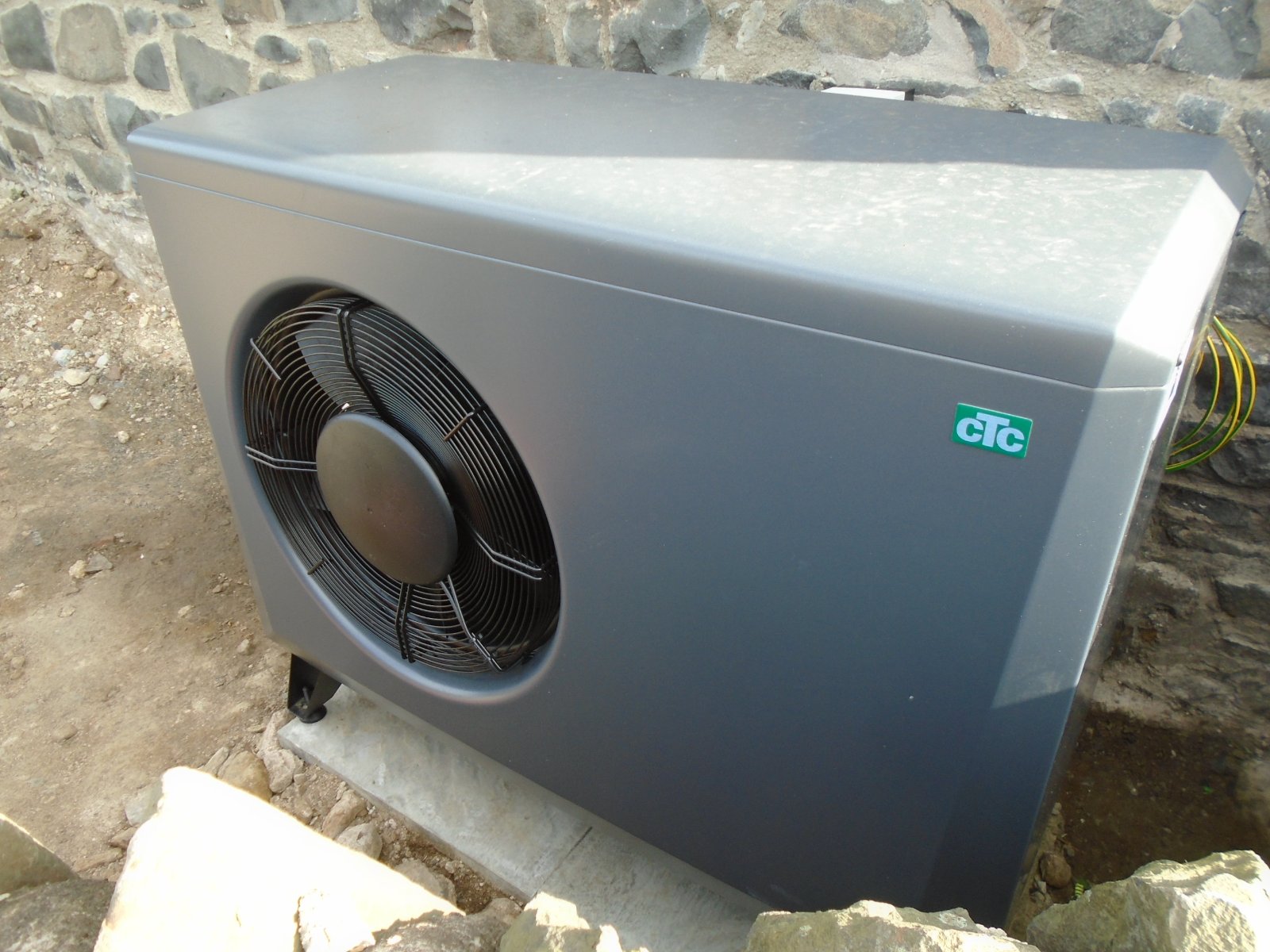 Heat pump installations are ridiculously and unnecessarily expensive.
I've seen some heat pumps they are just a small cabinet not a lot bigger than a gas boiler which sits outside the building with the minimum of pipework and electrical connection entering the house.
They are a glorified fridge in reverse, not really any cutting edge technology
I can't believe the components in those cabinets are any more complicated, or any more expensive materials wise than a gas boiler.
I suspect the pricing of them is inflated by unnecessary subsidies for installations.

I could go away and do a bit more research and I probably will, but give me an armchair ride with your own thoughts to get us started.


How do they work

Why are they currently so expensive

I will regard the thread as a success with a single response, a page or two would be brilliant.

Join in if you can

So much for your single response! It is clear there a lot of clever people reading this forum! Nice one!
Top

Dormouse wrote: ↑
02 May 2021, 14:04
If anyone wants a spectacular viewpoint on a road trip then the Cairn O'Mount road has it all. Strongly recommend the area. Much under promoted for touring. Less midges than the West of Scotland too.

We have threads for collecting such things called Nice places to stop off at!

I'll put a reference on it to your recommendation.

Sitootery - love it. Submit that the the OED

I am without a sitootery though, I really don't like sitting in the garden at all and find it most uncomfortrubble.
I sometimes wonder why I fart around bunging doomed plants in. Should let the weeds and Triffids take it over.
Top

careful with the Triffids! they bite and are not easy to house train.
Top

PS we have an alfresco but covered bar at the bottom of our garden along with a summerhouse with toads. after a while at the bar you forget about uncomfortable chairs!
PPS the bar came before the sitootery
Top

NewcastleFalcon wrote: ↑
02 May 2021, 12:26
So what's the stuff that courses through the pipework, valves compressors and heat exchangers.

This stuff with its useful physical properties, part of this informative vid here. link

These Hydroflourocarbons (HFC) are in worldwide use in refrigeration, air-conditioning and if the scaling up away from gas happens, in heat-pumps on a massively large scale than at present.

In themselves HFC's replaced the Chlorofluorocarbons (CFC's) well-known and banned for their environmental impact on the ozone layer.


From wiki https://en.wikipedia.org/wiki/Hydrofluorocarbon
They do not harm the ozone layer as much as the compounds they replace, but they do contribute to global warming, with trifluoromethane having 11,700 times the warming potential of carbon dioxide.[

The refrigerant industry asked for HFC phase-out, and the US Environmental Protection Agency just delivered


The Air Conditioning, Heating, and Refrigeration Institute (AHRI) and more than 35 other industry and environmental organizations, including the Association of Home Appliance Manufacturers, petitioned the Environmental Protection Agency (EPA) in April to set national targets to curb the use of hydrofluorocarbons (HFCs) in refrigerators, air conditioners, and other appliances.

The EPA delivered today. It’s the first time the federal government has set national limits on HFCs. It’s also the Biden administration’s first concrete regulatory step to tackle emissions since the US’s announcement that it would slash emissions 50% by 2030.

As I now find out the UK and Europe are ahead of the US in the process, with bans on the use of HFC's already in place.

With the likely further discouragement of use/outright banning of the use of HFC refrigerants, could old clean carbon dioxide (aka R744) as a refrigerant, mentioned by bobins, may well come into the reckoning. As I understand it HFC's are already banned for use in supermarket refrigeration.

Well relax if you are planning to buy an Audi E-tron.

Unveiled on April 14, the vehicles – the Q4 e-tron and Q4 Sportback e-tron – are Audi’s first compact electric SUVs. These are among the first cars – electric or gasoline-powered – to offer CO2-based thermal systems as an alternative to HFO-1234yf.(Tetrafluoropropene)

My Leaf has a Heat Pump, which is more efficient than the earlier Leafs, and has less of an effect on range. No idea what stuff is used in it.

While Tetrafluoropropene isn't exactly the most wholesome stuff , it is currently widely used now in automotive applications. As of 2018, 50% of new vehicles from "original equipment manufacturers" (OEMs) are estimated to use HFO-1234yf. It does break down into persistent organic pollutant short chain PFCAs.