thanks both..
Yes hydraulic tappets.. what is your thinking V6?

re: head, I may do Jim although its tricky here.. running out of space to have someone else's car here which isn't running etc.. I am only a tenant.

its a few hours of work and mess just to find out what did happen, although I do want to know

.. but many hours have been taken already..

And working outdoors in the dark is tricky too..
Top

the sensor finally arrived, of course it made no difference.

those last two I am not sure I have seen before (this isn't planet, just a decent handheld)

hmm..got me wondering if the misfire is electrical after all!

cold now and already stopped for the eve..
Top

When the engine is stopped, one or two of the valves are open and the associated tappets have the oil squeezed out of them and the valve slowly closes (which usually takes hours or days). When the engine is next turned over, the valve does not open and there is no compression on that cylinder until the oil pressure builds up to refill the tappet.

As you have been turning the engine over many times, it could be that several valves are now not opening, and if your oil pump is pumping air (due to the low oil level) it could be that the tappets are full of air (which is compressible) and not able to open the valves at all.
Top

I cannot say if I am right, but I seem to recall somebody on this forum (possibly Flying Clutchman or Lightly?) saying that, when they had a car with hydraulic tappets that would not start they would tow start it, as the towing vehicle could (by the towing action) provide enough torque for the oil pump to get the pressure up to that needed to drive the tappets.
Top

thanks both.. i have a de ja vu about your post V6.. and possibly regarding this car..

anyway, that could explain the compression readings.. but wouldn't explain what is broken with it (unless it lost compression whilst driving along) , and remains exactly the same now? Do I need to check resistances of the coil pack i wonder.. it was firing all 4 plugs last week, and the firing pattern looked believable.. Is the ECU not firing the plugs at the right time.. are the coil errors just red herrings, and lack of compression through mechanical failure the most likely outcome..

Pulling the head would scrap the car and take time - the car is only worth a couple of hundred if it was running, hence I am still trying to think of things I can check a little in the evenings.

Please don't give up John

There's thousands of us now on the edge of our seats wanting to know the answer... Gosh, some of us have no finger nails left...

And don't scrap it as it'll make a great lockdown project

has to be done Jim

between you and I, i never warmed to it really! it feels so front heavy, not a drivers car at all.. its done well for 6 years for £900 though..
just done another hour of sitting freezing in the drivers seat with the laptop.. nothing to report really.. odd that the car thinks its 93C coolant and 60C air temp! it hasn't ran for ages and the temp outside feels just on 0C..

I unplugged the green temp sender and PP reported the Coolant temp of 136C, which is quite nice and toasty

I also put some oil in! but nothing to report yet..

The airbag light and the traction light are flashing while she tries to start, but I am thinking the battery is a bit flat and that maybe why..

The PP had seen the same codes as my handheld including a new injector malfunction (Cyl#1, cylinder 1 coherance (which i know now is gearbox end) plus both ignition coil banks (1 and 4, 2 and 3). However, as before a spark test on these shows no errors. Even the injector clicked and no errors reported there..

attempts to start her tonight didn't instantly throw any codes, but I think that's just a lag in reporting..

Tomorrow I may remove the 2 rockers covers again and also possibly the inlet manifold, so i can look at the 4 valves of CYL#1

has anyone got experience of a 207 5 door hdi 1.6? I imagine a compliant, boring sort of ok runabout, with a porridge gearstick, and extremely frugal?

I unplugged the green temp sender and PP reported the Coolant temp of 136C, which is quite nice and toasty

That temperature sensor is well duff John and that may account for the duff running... Possibly...

have found a low miler locally ..

I can't comment directly on the 1.6HDi version but for a while I had a 1.4 petrol 207 and I rate them very highly... It was Robyn's car before and she did three years of commuting to Oxford in it with zero failures... It always had a nasty intermittent electrical fault which would cause it to randomly cut out... I gave her my nearly new C1 in exchange for it as I was worried for her safety as the fault gradually got worse... It took me six months to find the duff earth but after that it was as good as gold.

Good, reliable and tough cars... They will never set the world alight but they get the daily grind done in fine style

odd temps for sure. When an error flashed up for temp sender (after I unplugged it) the temp of the coolant at that point was 11C. If that makes sense ? i.e. no temp sender caused an error, and the temp measured at the error was correct!

anyway.. It would be lovely if the air and coolant temps being way out of whack was the problem! but from the above I am guessing the Diagnostics has two records of coolant temp..

Will probably get the inlet manifold off during this evening.
Top

tonights job was removing the removing inlet manifold. all 8 valves are shutting and opening ok.

I wonder if I can do a leak down test with bit and bobs lying around, just for fun.. will have a think about that..

otherwise, no other news

if anyone else can think of silly things I can try, to finally put this car to bed, let me know please

Ideally, not requiring massive effort, time or mess creating .. and no more new parts. a long shot I know .. I cant even throw an ECU at it, as it presume its all locked and I have no way of dealing with that.
Top

Have you checked the valve timing John?

Be good to know if the exhaust valves are opening and closing too but I guess removing the exhaust manifold is not as easy as the inlet...
Top

timing spot on Jim.. yes exhaust a no no

the poor thing .. can anyone tell me if they can or cant see the image? 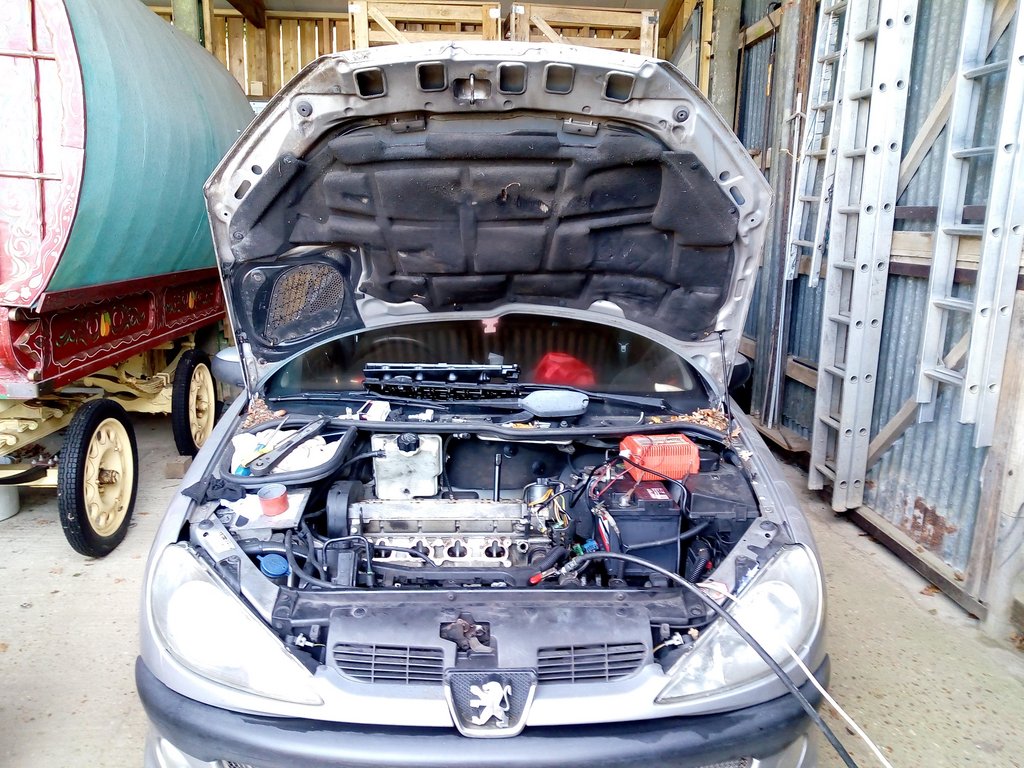 I left oil in 6 inlet ports from Thursday evening. 5 still had oil in them this morning.

by adding compressed air into any cylinders that are off-cam(s), i can detect bubbling through the oil sitting above the inlet valves, or hear it escaping down the exhaust.. its not very scientific, but air is not staying inside various combustion chambers..

Is Mike's suggestion what actually happened? is it really possible this car got so low on oil, that the hydraulic tappets have messed things up?
If I put all back together, and bump it down the drive (all downhill) may it come back to life?

wait - i have that wrong.. Mike said the valves may not open enough to allow compression, i am finding they are not really shutting enough...
Top
Messages: 51