The history book on the shelf is always repeating itself, well lets hope not...

The Aland islands have featured once before on the French Car Forum in the "Post your Car related Stamps" thread here.


NewcastleFalcon wrote: ↑
03 Jan 2015, 21:02
The theme in 2013 for the issue of "Europa" stamps by countries in Europe was post vehicles to celebrate the 20th anniversary of PostEurop.

Not surprisingly the UK went for the Morris Minor as opposed to the Fiat Doblo, or Peugeot Bipper/Partner

Each Country's "entry" is available here

Well first on the list is the Aland Islands-new one on me so this is what WIki says about them. "The Åland Islands or Åland is an autonomous, demilitarised, monolingually Swedish-speaking region of Finland that consists of an archipelago lying at the entrance to the Gulf of Bothnia in the Baltic Sea." 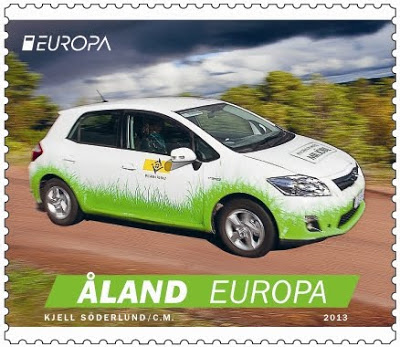 If you want a trivia question investigated this is the thread to post it on.

From POTD today, an illustration of the info available on named bricks...and across the UK and beyond there are thousands, of different named bricks proudly stamped on the products when every area of the country had its own brickworks and many many of them. One of these is unidentified as yet, but the one marked Snowball, a firebrick produced over 100 years ago , still just about bears the makers name. Both bricks were found on Spittal beach Berwick upon Tweed. Subject to time tide salt sand and spray for all those years.

After being a grocer for 12 years, James Snowball acquired a brick factory around 1853 & he is listed as being in partnership with Watson Walker in Slaters 1855 edition as Walker & Snowball (fire) at the New Stone Bridge Fire Brick Works, Gateshead. The 1856 OS map shows this works as the Stourbridge Firebrick & Sanitary Pipe Works & was situated in Stourbridge near Pipewellgate, Gateshead. The New Stone Bridge referred to in this entry was the original Redheugh stone bridge. The London Gazette dated 22nd October 1861 records that Watson Walker, a Spirit Merchant was declaring himself bankrupt & that he had been in partnership with James Snowball as Fire-brick & Sanitary Glazed Pipe Manufacturers at Stourbridge near Pipewellgate, Gateshead. James continues to operate this works on his own & he is listed in the 1861 census as a Fire Brick Manufacturer employing 15 men & living with his family at 25, High Street West, Gateshead. James continued to expand his business acquiring several collieries & in or around 1865 opened a new fire brick works at Derwent Haugh, Swalwell. The 1871 census lists James Snowball as a Coal Owner & Pipe Manufacturer. James passes away in 1879 and the business is then run by his son George Harrison Snowball (1846-1911). Kelly’s 1883 edition records that George Snowball of 10 Park Terrace was still running his business as James Snowball & Sons, Fire Brick Manufacturers, Swalwell. George was joined in the business by his brother James junior (1850 -1911). Both brothers died in 1911 and the Derwent Haugh Works, Swalwell closed in 1925. The census records show that George Harrison Snowball had nine sons and that son 2, George Harrison Snowball junior (b.1874) was a Brick Manufacturers Clerk in 1901 census, alas I have not found the 1911 census for him. However the 1901 census does record that he was now going by the name of Harrison Snowball. Then son 8, Malcolm (b.1886) is listed as a Works Manager at a Fire Brick Manufactory in the 1911 census. With finding at least two brothers were running their Grandfathers’ business Kelly’s 1914 Durham edition reads Snowball Brothers, Fire Brick Makers, Swalwell. Therefore it appears the works closed in 1925 with the Snowball family still in charge. Info by Martyn Fretwell.

Spotted a Barn owl today as I drove past, on the verge by the roadside apparently stuggling to take off from the ground. Thought it might have been caught a glancing blow from a car and might have been injured. So at the next save place I turned around and went back to find that it did fly up and alighted on a post, so hopefully OK.

Point of that was I pulled into a side road which just so happened to lead down to this....


The key trivia thing about this is that like a lot of things, there are people who take a lot of time and trouble to compile content on virtually every subject there is. No surprise that there is this. A web resource of information on signal boxes, even ancient long forgotten ones like this, now in the garden of a private house and invisible from the main road.

That looks very accomodating for a weekend in the northern wilderness!!

Have you had a letter from the guv about avian 'flu?
We all have and most of Newcastle.

I am sure I read this morning that it extended to Northumbria.
Top

I am sure I read this morning that it extended to Northumbria.

No letters Steve but there are signs up on the road for a 3km captive bird monitoring zone pretty much bang on where the owl was. Maybe just as well it flew off of its own accord! I do think it was probably a near miss road casualty rather than a sick bird.

There have been signs here for at least four months, spotted one while walking through the woods just off the A1M near to the Washington/Birtley services.

It is in Northumberland, Wooller & Holy Island are mentioned.
Top

Citro Jim pointed out the claim to fame (worldwide in specialist circles) of the seemingly insignificant Kilham Sidings on the Alnwick to Cornhill Railway.

Never knew about Kilham Sidings claim to fame Jim. Wonder what's left of them now? I might have to have a mooch. The Sidings are further north 5 miles 46 chains precisely from the Northern end of the line at the Scottish Border where it joined with the Kelso Branch.

A scorecard as requested:

Excellent Mick! They would get their money's worth, 3 legendary West Indian Cricketers on the pitch Joel Garner and Viv Richards and Clive Lloyd. I'll put a pic of Viv richards up on the Somerset County spotlight thread. My dad was a habitual converser with boundary fielders he may even have collared Viv!. Vic Marks was always quite chatty.

They also went to the Sunday League Match on 6th July 1986 with Somerset playing Hampshire.

The comment on one of Dad's photos was Hampshire won easily. IVA Richards got a duck which would have disappointed the crowd but there was another West Indian great on the pitch that day for Hampshire Malcolm Marshall.

And to tidy this up here's the scorecard for the John Player League game, despite Malcolm Marshall playing it would seem to have been James and Tremlett that did for Somerset!!

Todays County in the Spotlight Staffordshire and its links with Geoff Hurst had me wondering was the World Cuo Final Ball really orange?

Unbelievably there is a website dedicated to World Cup Balls...