The Chain...make the next link

How do we like to find out about stuff these days.....read it or watch it?

I am sure there may have been a great documentary made about the trials and tribulations and the side stories of a personal and political nature, in the building the Sydney Opera house.

I have just dipped into part of the story, a part of this being the argument between plywood and steel and the resignation of the designer Jorn Utzon from the project. Its in the written word here.

Does make you want to find out more, but after reading that bit I feel myself clicking towards the youtube tab to see if I can find that documentary which does my reading for me and tells the story with pictures and audio.

But maybe its better just to read and let your imagination make the pictures and the sound......although it is a rapidly disappearing art.

And a link back to the bridge in Durham with the female singer.

Even if her name wasn't really Judith Durham.
Top

A Jørn Utzon design, but major involvement of the Ove Arup's Group as structural engineers to turn the drawings into reality...and in an amazing coincidence guess who was wandering about amongst the construction site in 1967.....today's youtube flavour of the day...The Seekers in their prime....

Considering that's a construction site, they're showing a shocking disregard for general health & safety principles. Not a single hi-viz vest or hard hat in sight, and I bet she's not wearing steel toe-capped boots.

I am sure there may have been a great documentary made about the trials and tribulations and the side stories of a personal and political nature, in the building the Sydney Opera house.

I think Jasper Carrott did a tour of New Zealand and Australia, including a date or to at the Sydney Opera House. He commented (while he was looking around before a gig) that the seats looked like grave stones. A worker replied that they were, one for each comedian that had 'died' there, and they were getting ready to put Jaspers' one in!
Top

Anyone heard of Malvina Reynolds?

You may know some of her songs. and with one of them I'll take the chain over to San Francisco the place of her birth.
The link is through the song Morningtown Ride, most famously recorded by the Seekers but written and recorded by Malvina. You will be so familiar with the seekers version that this will sound strange.

Her other subsequently most famous compositions were "Little Boxes" and "What have they done to the Rain" recorded by many artists. Havent heard them for some time so the Pickled Egg Jukebox might give them an airing.

..and to cement us in place in San Francisco how about a trip over to Alcatraz....and guess what in the gardens of Alcatraz what do we find?

...a brick stamped COWEN.....now avid readers of the OTCL posts will know exactly where that comes from...

The Discovery film that greets island visitors introduces the idea of Alcatraz being a layered cake of history with each era built upon the previous. Looking closely, an observant person can see where the layers meet.
The military mainly used bricks in the early construction of the island fortifications. The bricks are like ingredients in the layered cake history, each adding to the flavor of history.

The bricks themselves are rich in history and have their own stories about where they were made and how they arrived on Alcatraz. Brick companies often stamped their name in the bricks and in the gardens, nine types of named bricks have been recorded. Many of these bricks were re-used in the construction of the 1940s era garden pathways mostly found in the Officers’ Row gardens.

One of the early bricks is stamped ‘COWEN’. This firebrick was manufactured by the Joseph Cowen & Company at Blaydon Burn in northeast England between 1816 and 1900. It is a mystery how a brick from northeast England ended up in a garden pathway on Alcatraz, perhaps the brick came as ballast in a ship and was then destined for building a growing San Francisco.

The fascinating world of stamped bricks

I can't miss the opportunity to put up this picture and claim it is the link between California and Maranello in Italy:

I think I prefer the Older one Mick! in its eponymous environment.

Just before we leave California need to take a little snap of the Golden Gate Bridge.

.and what I would have on the in car entertainment crossing the GGB in my Leaf is over at the Pickled Egg Jukebox

"The very best parts of each trip are the Golden Gate Bridge..."

mickthemaverick wrote: ↑
04 Jul 2020, 00:19
I can't miss the opportunity to put up this picture and claim it is the link between California and Maranello in Italy:

Maranello itself must be one of the least interesting places in all of Italy, unless you know different!

The local Citroen Main Dealer as you might expect in the home of Ferrari, has an imposing presence.....

NewcastleFalcon wrote: ↑
04 Jul 2020, 09:23
Just before we leave California need to take a little snap of the Golden Gate Bridge.

.and what I would have on the in car entertainment crossing the GGB in my Leaf is over at the Pickled Egg Jukebox

The bridge has found a voice. Apologies for the talky bits.

Following my invitation to "Get us out of there" I had a quick walk around the town where I came across the new Town Library. Now 'so what?' I hear you cry,

the answer comes back to architecture and a development on the Brutalism which we visited earlier. The architect responsible was Arata Isozaki
and I have taken the following extract from his Wiki biography:

"Isozaki was born in Oita on the island of Kyushu and grew up in the era of postwar Japan.

Isozaki completed his schooling at the Oita Prefecture Oita Uenogaoka High School (erstwhile Oita Junior High School). In 1954, he graduated from the University of Tokyo where he majored in Architecture and Engineering. This was followed by a doctoral program in architecture from the same university. Isozaki also worked under Kenzo Tange before establishing his own firm in 1963.

Isozaki's early projects were influenced by European experiences with a style mixed between "New Brutalism" a "Metabolist Architecture" (Oita Medical Hall, 1959-1960), according to Reyner Banham. His style continued to evolve with buildings such as the Fujimi Country Club (1973–74) and Kitakyushu Central Library (1973–74). Later he developed a more modernistic style with buildings such as the Art Tower of Mito (1986–90) and Domus-Casa del Hombre (1991-1995) in Galicia, Spain. The Museum of Contemporary Art (MOCA) in Los Angeles, completed in 1986, was his first international project and his best known work in the U.S. In 2005, Arata Isozaki founded the Italian branch of his office, Arata Isozaki & Andrea Maffei Associates. Two major projects from this office include: the Allianz Tower CityLife office tower, a redevelopment project in the former trade fair area in Milan, and the new ,oTown Library in Maranello Italy.

Despite designing buildings both inside and outside Japan, Isozaki has been described as an architect who refuses to be stuck in one architectural style, highlighting "how each of his designs is a specific solution born out of the project’s context." Isozaki won the Pritzker Architecture Prize in 2019."

Full details can be visited here.

Now that will offer a choice of next destination from Japan to LA . I'll let you choose

Its well hidden Mick! Inspired by an Amoeba and Norman Wisdom's cap.

Well of the two I am less familiar with Japan. So we'll go to Japan and see what we can tease out which is not too obvious. I'll kick off with with a nice hunk of japanese concrete, and an odd bridge. 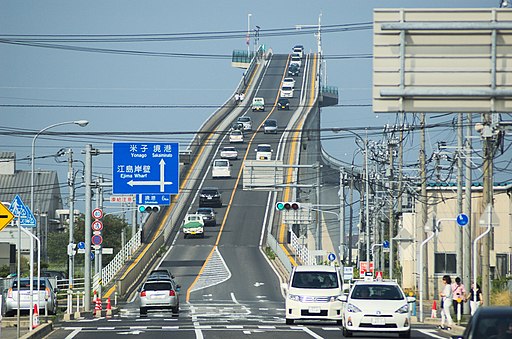