Good news Northumberland County Council havent got round to replacing the charging post at one of our go to destinations. Still free as of today, although they have put the parking charges up from £1/hr to £1.50/ hr.

NIO are making their first expansion out of China, and are launching in Norway, and bringing with the launch their model of top-notch customer service. They are also bringing their Battery swap stations which have been successfully introduced working and expanding in China, and their NIO Houses, for members of the NIO "family", club houses in strategic locations for NIO owners.

More about NIO previously posted on the thread as an introduction.

NewcastleFalcon wrote: ↑
02 Mar 2021, 09:46
In the very early days the current generation of electric vehicles, that is literally only 10 years ago. The Renault Fluence was designed to allow a rapid battery swap rather than a recharge at the roadside on your journey.

That approach was trialled in Israel, but has disappeared in favour of ever more rapid charging, at the roadside.

Well NIO in China have revived it, and surprisingly it is on a pretty large scale

They already operate over 200 battery swap stations around China and plan to have 500 stations by the end of the year.

NIO have a bit of a different business model, hugely focussed on customer care and an exclusive club for its customers with "NIO houses" meeting places for NIO owners, and contrary to every other manufacturer have developed their battery swap network for the exclusive use of their customers.

Maybe a parallel with TESLA's Superchargers, but opting at least in part to offer the battery swap. 0-100% charge in 3 minutes and 500,000 swaps done last year.

A little diversion, but an informative video. Personally I like the presentation of this chap Dr Euan McTurk.
Plenty of good animations and an "interesting lecturer" sort of presentation.

Here he considers the "balancing of the books" when taxation catches up with the EV infrastructure of on the road, and home charging of EV's. With the majority of Ev charging done at home, what are the ways in which Government taxation will catch up?

For anyone who's not familiar with Euan McTurk, he's quite well known in EV circles not just as an EV evangelist, he's actually a battery researcher who works for a company (somewhere around East Lothian/Edinburgh from memory) developing Lithium Ion batteries and advanced charging systems. Prior to that he was doing the same research work at a university.

So when it comes to the videos he's made regarding the operation and chemistry of Lithium Ion batteries and charging systems he knows what he's talking about - it's his day job!

So some of his other videos going into the operation of batteries are worth a look.
Top

Battery Swap does appear to be having a bit of a renaissance. This morning on the Public and Commercial transport thread there was an example of HGV battery swap in Australia, NIO make it work in China for their exclusive club of customers across over 500 sites and have taken it to Norway. Now Geely are having a go no doubt copycating NIO

...and the next one please. Renault revisit battery swap


Renault boss Luca de Meo is considering the introduction of a battery replacement system. That's what he told The Financial Times at the Future of the Car Summit on Tuesday. This seems possible to revive an idea that had already pursued in the early 2010s – together with Shai Agassi's Israeli startup Better Place. Renault

De Meo then commissioned his engineers to find a technical solution for battery replacement. "Maybe we'll see this thing in some cars," the Renault boss said.


'It's not decided yet, but I see it as an interesting option. We need to find a pragmatic solution, but from a business point of view, it makes sense to disconnect the battery from the car." (Luca de Meo)

Battery swapping technology would eliminate long charging times over long distances – because a battery replacement would ideally take only a few minutes. De Meo, however, obviously has another advantage in mind, namely an economic one: the technology enables lower acquisition costs: you only have to buy the car, it is only rented. Renault had initially offered such a battery rental on the Zoe, but without the possibility of swapping.

Swapping also makes a special "Battery as a Service" model (BaaS) possible, eliminating the strict assignment of "one car - one battery". You simply swap the empty battery for a full one. This allows the manufacturer to maintain control over the condition of the batteries, to replace them at will with fresher batteries or batteries with more powerful chemicals, which can also lead to more range.

That battery swap-out concept will soooo suit the car manufacturers as they'll be able to sell a subscription service and keep an income stream coming in once you've bought the car. Simon (Mandrake) highlighted one of the troublesome issues (in his post about warranty claims) with BEVs and that's their reliability - they're going to end up being too reliable which means a loss of ongoing income for the car manufacturers, and that's something they can't easily rectify. There's been a push for personal contract hire / lease of cars for a while - which suits the car firms nicely, but roll that in with a subscription for your battery swaps and they'll be loving it. There's the added bonus of making BEVs more appealing to the average motorist as well. What's not to like ?

Interesting to see battery swap resurfacing, and NIO have gone into it in a big way. They aim for many more but 500 stations spread across China with a set of complicated robotics, behind the simplicity for the user, would seem to be a long term maintenance nightmare.

I did like the relative simplicity of the Australian Trucking Battery Swap. Fork lift truck and a lift out plug in approach. Not keen on the precision of robots unscrewing bolts, fit the battery replacement packs with a plug and push it into a socket on the vehicle, then close the flap to secure it.

With that trucking example and a regular route yes battery swop saves a lot of commercial down time.

Posted on the Public and Commercial Transport thread

Few key pieces of battery swap info from NIO in this article. Clearly on a different scale from the Renault's pioneering in the early 2010's

Let's recall that all NIO electric cars, with 70 kWh, 84 kWh and 100 kWh battery packs can use the stations to quickly swap the battery and continue a trip, or to upgrade the pack from lower to higher capacity. Such an approach is possible thanks to NIO's Battery as a Service (BaaS) solution (monthly battery subscription).

The company has released also a few interesting stats:

the number of 2 million battery swaps is estimated to translate into over 396 million kilometres (246 million miles) of driving distance, or about 198 km (123 miles) per swap
the most frequent Power Swap user has completed over 654 swaps
the most travelled Power Swap user has visited 67 stations nationwide
Harbin, Beijing, Chengdu, Haikou, and Shenzhen are the top five cities in China with the highest per capita swaps

Tesla and Fastned create ‘Energy Superhub’ charging station in Oxford due to open at the end of 2021.


“Fastned, the European fast charging company, teams up with Oxford City Council, Pivot Power and Wenea to build and operate one of it’s largest fast charging stations at the upcoming Energy Superhub Oxford. The Fastned station will have up to 14 fast chargers and there will be 12 Tesla Superchargers on site. It will be one of Europe’s most powerful electric vehicle charging hubs, with up to 10MW of power available for future expansion. It is the first of a number of similar sites planned by Pivot Power across the United Kingdom. The Energy Superhub is located on Oxford’s ring road and integrates with the Redbridge Park and Ride facility. The hub is due to open at the end of 2021.”

I think initially, at least, it's important to have some large, eye-catching locations. Until you actually own an EV, it's easy to look around and assume there's no charging network around, and write off changing to an EV. Large sites help with adoption by bringing greater awareness. You would be hard pushed to see the Fastned site in Newcastle tucked away in a back street invisible to passing traffic. Big site just off the western Bypass or down at the Metrocentre would have got a lot more passing eyes.

However much is "announced" it will always be "a drop in the ocean" for some. Meanwhile on the ground you can just about see that the charging infrastructure growing at pace and appearing in familiar locations, and Supermarkets/Shopping Centres/ Fast food companies/Hotels and yes Petrol Stations, all getting involved with Chargepoint provider partners to develop infrastructure.

Taking the Oxford project as an example what were/are the relevant proportions of public/private finance going into making that project happen are probably difficult to find, but the level of public "investment" would be expected to lever in considerable private investment on top. At least headlines so far for the Oxford site are positive, and it is the highly visible type of development which needs to happen in City access hubs throughout the Country. Different views of the story might conclude "Government subsidises billionaire Elon Musk's superchargers at Oxford".

Meanwhile, Audi are wanting to enter the world of NIO but a bit behind. This is the type of thing they want to create.
I'm guessing you wont be able to charge up your Wuling Hong Guang MINI EV there...

Its new , innovative, exciting, looks good, I like the off-grid and battery storage bit, and I hope they make it work but make up your own minds up with the press release from the horse's mouth. 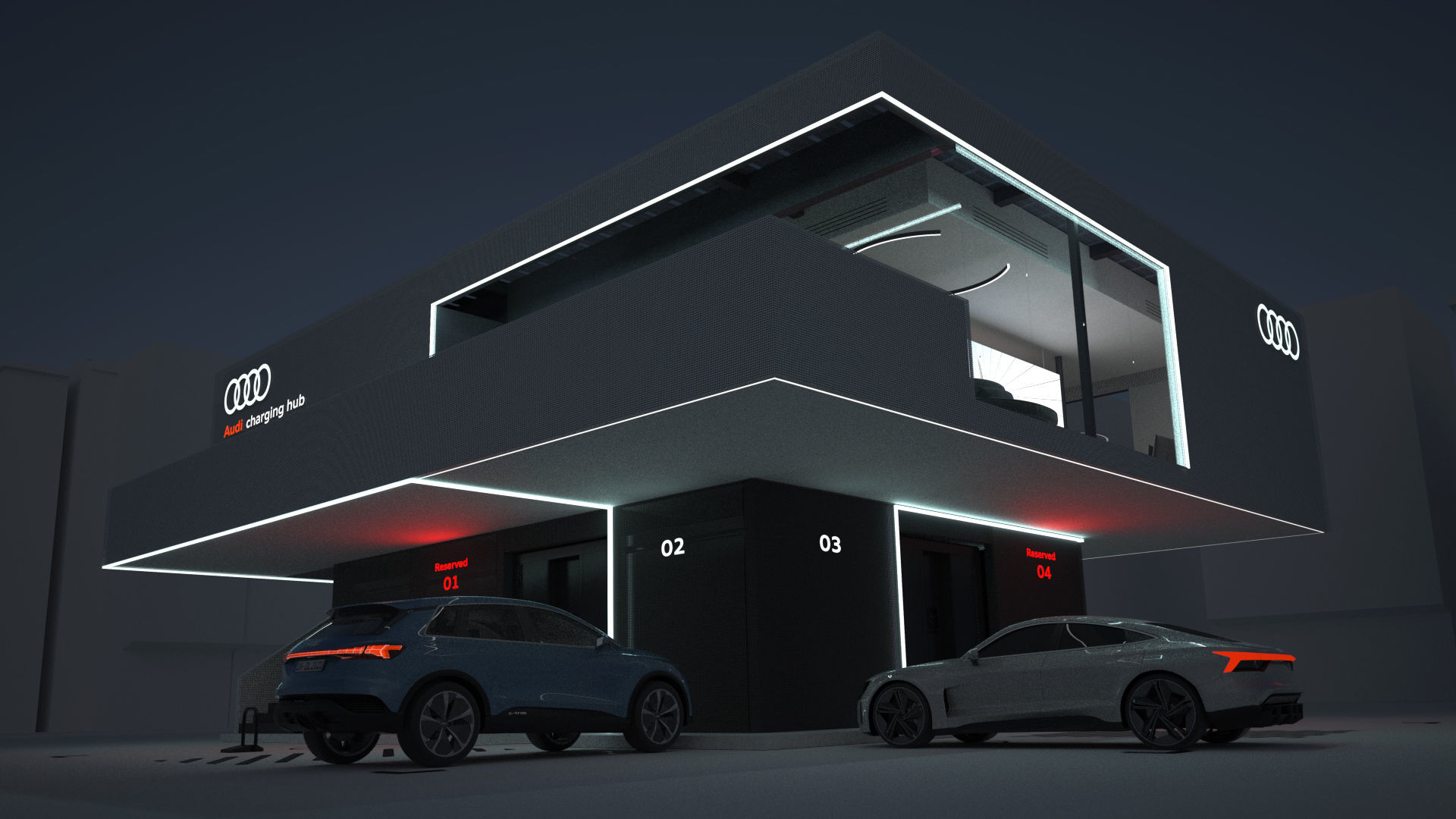 Not entirely unexpected but HMRC have just clarified that electricity sold at EV public chargers is to be taxed at the full 20% VAT rate not the 5% VAT applicable to household electricity which some (but not all apparently!) public charging networks were previously able to charge.

As a result Instavolt have raised their tariff from 35p/kWh to 40p, further widening the charging price gap between charging at home and public charging.

Expect some of the other charging networks to follow suit.
Top

An interesting article written a few weeks ago - it sounds like Instavolt were exploiting a loophole to charge 5% VAT instead of the normal 20% business rate: