Mentioned on the Energy Matters global and domestic thread, but part and parcel of the home charging EV infrastructure.

OVO and Octopus seem to be the most active in specific EV tariffs, but everyone else will pile in.


Not sure how OVO are going to do it, but they are offering a tariff which charges a different rate for charging your car, than your home energy supply. Home energy supply will be your normal rates on your domestic energy plan, but they are offering a different rate of 6p/kWh for charging your car. Ah yes I see its a trial and spaces on the first trial group for the Drive Anytime tariff are full.

Blog Post with More Information. Monthly Bill at Domestic Plan rates, but credit adjustments calculated and deducted on a monthly basis for the amount of electricity consumed by your smart charger at the 6p/kWh rate. 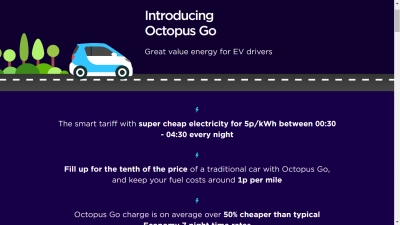 We are in the early days and Government still has duties and VAT on Road fuel for Petrol and Diesel as an income stream. With everyone potentially having a "petrol station" at home, and as EV battery range increases, for the majority of the journeys there will be no need for "on-road " refuelling, there is likely to be a catch-up on EV charging at home and its taxation. The domestic smart meter/smart charger route, and OVO's approach of charging different rates for specific usage, may well become the norm, and the Energy companies could well become tax collectors.

NewcastleFalcon wrote: ↑
30 Mar 2021, 14:07
It was going to happen sooner or later, the freebie is coming to an end, and NCC are to introduce charges pretty much in line with the rest of on-the-road EV charging.

35p/kWh with my Leaf which probably gets 3.6 to 4.2 miles per kWh depending on season and heaviness of the right foot, is around 9 pence a mile.

I currently pay 15p/kWh at home to charge on a standard 24/7 tariff with Bulb, but I'm considering switching to Octopus and finally relenting and getting a SMETS2 smart meter installed as they have an EV specific plan (Go Fast) that gives about 13p/kWh during the day and 5p/kWh from 12:30am to 4:30am.

I already use the built in timer in the Leaf to defer charging to the wee hours of the morning (for battery degradation reduction reasons - leave charging as late as possible) so I might as well get a cheaper rate in the bargain! A 6kW charger Leaf - as both ours are, is able to fully charge within the 4 hour cheap window, let alone the ~50% charge needed for my daily commute. (I still have about 50-65% left when I get home so it's only needing half the maximum charging time)

I've worked out I'm currently paying about £60 a month in electricity for the car as I do a lot of miles (about 1200 a month now) which is 5p/mile (not bad considering it's winter, so the figure includes heating and plugged in defrosting/preheating) but charging at 5p/kWh would cut that down to £20 a month in winter and less in summer...

Edit: Didn't see your post about Octopus until replying on the previous page. Snap!

Unlike Petrol/Diesel where you're pretty much stuck with whatever the going price is, there is a lot more variability in electricity pricing and if you're willing to go with a smart meter and use timed off peak charging you can really slash your outgoings on charging.
Top

I'm with Shell Energy and have smart meters on both gas and electricity......I just don't have a electric car.

I've been dipping into the various tariffs on offer Simon, but like you say the Smart meter/ Charger combination is necessary to access the currently 5p and 6p /kWh rates for charging. Its going to be more the way things go. Get a smart meter, get the best rates.

Is the octopus offer an electricity only tariff, so if you have gas as well you would have to go for a separate gas only tariff too?

For now I still have a convenient "free" 7kW public charger. NCC have only caught up with the rapids so far, rather than the old "Posts". But I will have to think about a smart meter at least. I do have my BP Pulse card, and my chargeplace Scotland card so its maybe more days out over the border for us

This video is what got me thinking about switching to Octopus again, although he's worked it out for his particular usage, Octopus Go definitely comes out on top if a significant chunk of your electricity use is car charging which can be done in the small hours of the morning. For me the car is about 40% of the entire household electricity use.

I can only speak as find, I was with First Utility and they were taken over by Shell, I pay £44 a month by direct debit for both gas and electric and I'm always in credit taking cash back from them every six months or so.

When Shell took over they came and swapped out the smart meters to the latest and have, for me, an excellent system online for keeping track of my energy use.

They also handle my solar panel feed in tariff and make the payments much quicker that First used to.

I note that all the energy companies have upped their prices this springtime but I'm on a fixed price deal for another 18 months.
Top

Charger Hogger Number 1.
This is a 7kW "post" it charges up at a maximum of 7kW/hr. The Jaguar I-Pace has a 90kWh battery.
It is a ridiculous "option" for that driver to charge up such a vehicle at a 7kW post unless they leave it all day and part of the evening.

The car has a range of, let's just believe it for a moment, 292 miles. I can guarantee that that Jaguar did not need charging up, unless that driver is just unbelievably ignorant. There are 6 rapid chargers by the A1 a mere 7 miles away if desperately required, and a home charge on a vehicle of that range will accommodate 99.9% of there and back journeys without touching an on-the-road charger.

If there were 100's of charging posts it wouldn't matter, but at a very popular destination there is only 1 post with two sockets. Both the sockets were being hogged by long range EV's. The other socket was being used by a KIA Niro electric Again a large range EV (282 Miles) for which it is totally unnecessary to use a Slow Destination Charging post rated at 7kW.

NewcastleFalcon wrote: ↑
30 Mar 2021, 14:07
It was going to happen sooner or later, the freebie is coming to an end, and NCC are to introduce charges pretty much in line with the rest of on-the-road EV charging.

35p/kWh with my Leaf which probably gets 3.6 to 4.2 miles per kWh depending on season and heaviness of the right foot, is around 9 pence a mile.

They have only gone and started to charge 35p/kWh at the slow 7kWH charging posts as well. Sub contracted it out to Rolec and Vendelectric, and you need a smart phone and the "app" to operate the thing as well. Rolec supply and install the hardware and Portal Power Limited under a web presence of EVChargeonline provide EV Charging and Back office solutions.

Out comes the "granny charger" on the 3 pin Plug, and the first home charge ever at a rate of about 3kWh /hour so its going to be 4 to 5 hours charging up. We pay about 16p/kWh on our home electricity so it makes no sense to use that public charging post anymore.

and here is the new charging post at what is an extortionate rate for those 7kw Posts. Rapid chargers tend to be round about that rate, in general. I note from my companies house that the service providers accounts are late! They won't be getting my bank account details in any case.

Yet another example of an uncoordinated free for all in charging infrastructure, and a chargepoint that only works with an "app". Then again I could be the only EV driver in the UK who doesn't have a smart phone and who might like just occasionally if I am desperate to just top up at that charger by flashing my bank card.

I would be sunk too, ancient £25 phone. Worries me that I might get into a car park that needs a phone to pay.
Had enough trouble in Wilko's car park trying to pay with cash - put a £1 coin in that it chucked out, twice.

Forgot to collect my change too

Well while NCC have been quick with the 7kW charging posts, the rapids haven't quite got the "back office" stuff sorted so they are still on free vend for now. One of the chargers over the border of Chargeplace Scotland was out of order but they are pretty well catered for in all the "Border Touns" and they aren't that far from each other so the "Home of the Regiment" provided us with a drop of Scotand's finest juice, gratis with our Chargeplace Scotland annual membership card.

Concerning the batteries, I'm presuming that the batteries in Teslas and their brethren will be pretty similar to AA batteries.
If so, this could be of interest.
Especially the bit from 16' 20"

He would have been quicker with a sardine can key.

As it was he just proved that it does what it says on the can.
Top

Agreed, the snippy tool wasn't the best thing for the job and rather ineptly wielded.
I thought that after the initial snip, a pair of snip-nosed pliers would have been a better choice.
Still interesting and amusing though.
Top
Messages: 553