Mandrake wrote: ↑
18 Nov 2019, 22:05
Some Leaf's have 3.3kW chargers, some have 6.6kW chargers which will charge twice as fast on a suitable charge point - not sure what kind Neil's has though! The 6.6kW kind would fullly charge from nothing in about 4 hours.

Got the handbook out and pressed a few buttons, so this confirms my leaf has a 6.6kW charger

3 days into Ownership, more by good luck than good management I found I had the 6.6 kWh charger...and a heat pump too!

That charger (the one at Bowlees Visitor Centre) is what you might describe as being being in the charging wilderness. You couldnt arrive at that charger with less than 30-40 miles in hand relying on it to be working, otherwise you would be stranded.

Its a 7kW one and plugging it in when we arrived it had charged us back up to our 80% unnoticed well in advance of us heading for home.

It has "charge your car" stickers on it, but if you phone any of those out of date numbers you are directed to BP Chargemaster Call Centre anyway. That one is an exception in that it is a fairly new installation and the Polar card works. There are plenty "charge-your-car" managed "old 7kW posts" around the NE none of which have my RFID polar card on their approved list. I have simply written them off now as a waste of time and never to be relied on.

Sorry I couldn't remember that. It's just as well you have the 6kW charger as you seem to charge a lot on AC when you're out and about - that would be painfully slow at 3kW!
Top

For future reference found out that there was no rapid charger at Allendale Mill in spite of it being on the Polar Plus map, but there is one of these pretty dependable free 7kW post which you simply plug your own cable in. Again its a useful charger as a stepping stone to visiting the lakes/ weardale/teesdale from the North

Here's one for the "EV's add too much charging time to long journey's" sceptics.

A run from South West Cornwall to John 'o groats in Scotland in a Tesla Model 3 where the total amount of time spent stopped charging over the entire 854 mile journey was 1 hour 31 minutes. (Beating the previous record by 2 hours)

Is there anyone here who would want to drive 854 miles with less than 1 hour 31 minutes of total rest time along the way ? Not me!

I presume the three of them were taking turns driving as it would have been a pretty long journey non-stop for one driver...

Yes, a Tesla Model 3 can charge a lot faster than many other EV's but I think it's a good example of what will be possible in the future when EV's with very high charge rates are readily available, along with plenty of high speed rapid chargers.

While it will never be as fast to rapid charge an EV as fill a Petrol or Diesel tank, it's possible to close the gap to the point where the endurance of the human body becomes the limiting factor and I would say the Tesla model 3 has already reached that point when used with 125kW and faster rapid chargers.
Top

Back in the day I'd think nothing of doing 700 mile drives with little more than a "splash 'n' dash" en-route. I've driven back from Poland to the Eurotunnel with only the briefest of stops - and without having to fill the car at all during the journey. I used to do the South Coast to The Black Isle with minimal stops. If I'm driving to a destination, I want to get there without dithering

Having a total sub-300 mile range in 'the tank' would actually frustrate me. I can absolutely see how BEV's suit a regular commute or retired people, but their range and price currently put me off.
Top

Teething troubles with a couple of the new NECA Electric-Blue Chargers, both off-line and unusable either through app or via bank card contactless. Gave them a call and hopefully next time we come to use them they will be fixed.

Had a long chat with A MG ZS EV owner tonight at the charging point at Northumberlandia. Complete contrast to the Ioniq driver the other day. Absolutely loves his car, got a great deal on it, and enjoying huge running cost savings compared to his previous diesel.

Some welcome news on the contactless charging front - at least if they follow through.

Interesting to find out the UK transport minister is an EV driver...

Interesting to find out the UK transport minister is an EV driver...

He has a Tesla Model 3

From 2019
"Shapps himself benefitted from the grant last month when he took delivery of his new Tesla Model 3, for which he spent two years on a waiting list. The car was fitted with what Tesla calls ‘Full Self-Driving Capability’ – a £5,800 optional extra – with the minister paying approximately £44,000 himself."

Never even realised this existed until today.

Part of a £4 Million Project, a six "pump" charging station just up from St James Park in Newcastle installed by FastNed. I wonder if the more they make charging stations look like petrol stations rather than stick them away in the corners of a car park, the public will begin percieve this whole electric driving thing is as little more "normal", and make it look like its really going to happen. 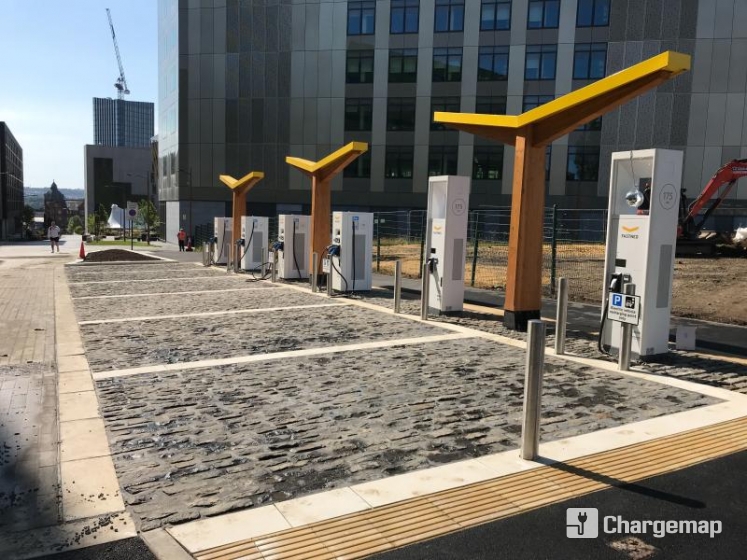 Yes and there's one at Sunderland too 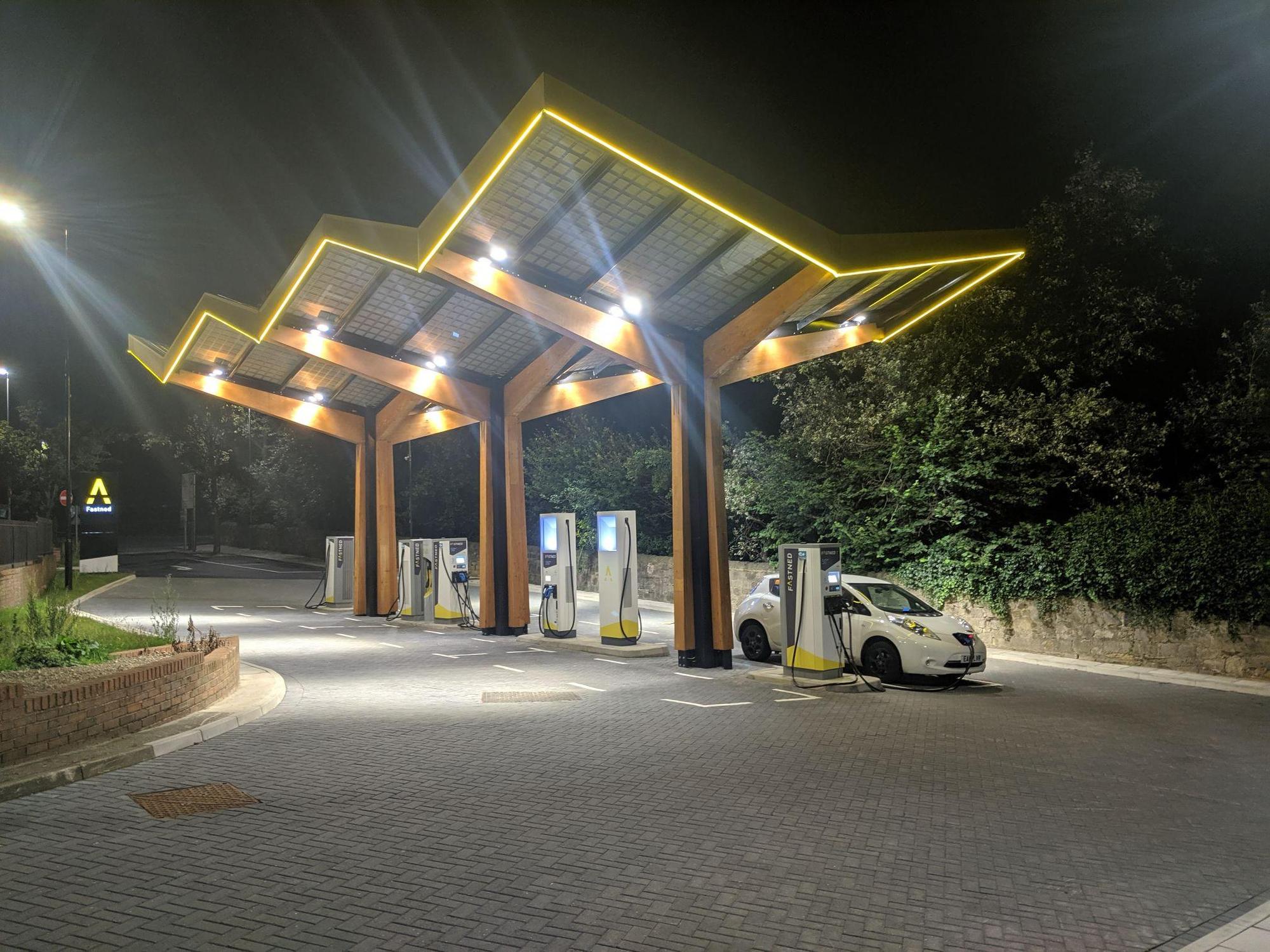 
The one that caught my eye.....INstavolt are partnering with McDonalds Restaurants in the UK to install rapid chargers at their "Drive-thru" restaurants.
https://instavolt.co.uk/mcdonalds-partn ... ive-thrus/

InstaVolt’s new rapid charging points are capable of charging at 125kW, amongst the fastest in the UK and cutting charging times for motorists, making EVs a more realistic prospect for drivers than ever before. The partnership, the first of its kind for a major UK restaurant chain, will increase accessibility of rapid charging for drivers across the UK by providing a network of convenient and recognisable locations beyond service stations, residential streets and workplaces.

The infrastructure is happening, the automakers/battery suppliers need to accelerate their production and sales ambitions.

Hope its better than the rubbish McDonalds tries to foist off onto us!
Top

70 Reg Black MG ZS EV had obviously been sitting on the charger for ages, no driver present, so just headed off to our destination charger. 70 Reg BMW I3 (full electric) occupying one of the 7KWh sockets, but there's 2 so no great problem apart from evicting an Audi ICE from the ev parking bay. When I say evicting it was all very amicable!

For future reference two pod-point chargers at Bellingham. Useful stepping stone if I can get my "telephone them to start a session" method to work. With those chargers not being the rapid ones, not sure but you may be able to get 15 mins gratis without using the app. Never tried it and didnt need to today.

Had a good chat, and probably a very nosey chat with the Salsa (Salary Sacrifice) VW Hybrid owner who worked for the NHS. I did ask her about the salary sacrifice scheme which is how she has been getting her cars for many years now. She is just about to ditch the hybrid for a fully electric KIA E-Niro under the scheme. As well as the tax and NI benefit, work milages allowances get paid. The downside is in the reduced pension and NI contributions both from the employer and employee which will affect pension entitlements and the job and the car being tied together. Leave the job and you would have to replace the car.

The NHS scheme is very popular and she did say that the Jaguar I-paces on offer were snapped up straight away, and excellent offers do crop up with low net monthly costs for some quality EV's.