Couple of new tyres on the back, and DIY discs and pads at the rear in advance of today's test, and the Leaf is MOT'ed for another year.

Insurance time as well, sticking with the same mob as last year. Tax due 1st November, I've managed to put enough aside to cover that

Although BB Leaf is Zero Rated you must still "Tax" the car.

I was disappointed to find that the Civic was £220 to tax (never noticed how much it was last year when I bought it) Only a 1.8 petrol when the C5 was a 2.0 HDi and only £145. I thought petrols were less than oil burners.

I hope your tax won't break the bank Neil.
Top

Should manage it Steve

, I posted that up as a reminder to self...you are supposed to tap a few keys and "Tax" the Leaf even though its zero, and easily forgotten.

This rather gorgeous looking creature was in the car park, and I had a brief chat with the owner. It was one of the first Leaf's on an 11 plate, and made in Japan. She said it had 57,000 miles on, but because it is 10 years old, it had pretty much reached the end of its usable useful life, other than simple round the doors 10-20 mile shopping trips. The lady still loved her car, but for any sort of longer journeys like a 150 mile round trip to Newcastle or Edinburgh would be pretty much impossible.

So looking at that car, Still in great condition bodywork and running gear wise with plenty of life in that, but the battery, needs replacing or upgrading to restore functionality to that car. Is there an industry to help

, or will Nissan help with that

, or indeed would it be worth it

Is that the time when the battery replacement would be best facilitated by a leasing arrangement should you wish your car to have be set up for another 10 years with a replacement battery.

I think you've already had this one on before.

Should manage it Steve

, I posted that up as a reminder to self...you are supposed to tap a few keys and "Tax" the Leaf even though its zero, and easily forgotten.

You should be able to set it up to auto -renew, you might have to create a Direct Debit for £0 as the system might not be that clever!

Thanks Gibbo Cleevely's seem to be getting plenty of work but when you look at those sort of prices unfortunately the "recycle", plus buy a whole replacement car option, is likely to be the most economical for the owner, and it's part-used batteries which they fit, as they become available.

With replacement cells in 2021 being considerably cheaper than the originals fitted in 2011, the aftermarket needs to develop to avoid the inevitable scrapping of 10 year old cars. Maybe this is where Herbert Deiss's old idea comes in.

If you arrive at the 10 year point in a car you like, but the battery has degraded to an unacceptable level of performance, instead of forking out say £7,500 (or hugely more if its a TESLA) or scrapping the car, the battery pack gets replaced with a new one and you pay for it by the month on a Battery lease. Manufacture gets the old battery pack back and recycles it properly as they choose.

At the end of the day you pay for the battery replacement regardless of course, but at that stage the choice of paying outright thousands, or scrapping the car, may be unpalatable. Continuing to use the car with a new battery with a guarantee, but with a new monthly battery leasing charge to pay, may well be a more attractive proposition and save some cars from too-early recycling.

I thought I had posted something up about a Nissan Scheme in Japan.

The cost of replacing the batteries in a Nissan LEAF has dropped to just £2,000, thanks to a new Nissan scheme to offer refabricated batteries in Japan.

Cant confirm the validity but that is much more like it. As the comments on the article state Nissan UK do not have a refurbished battery scheme, and it doesn't appear to have travelled out of Japan. One commenter indicated that as at the date of the post (28/1/2020) Nissan UK offered a Battery Replacement at £17,000 plus VAT. I guess at that price they have replaced zero batteries , and aren't really trying.

lovely day and a nice place to stop off at

and have a drink of juice behind the black bull

No response from the car when clicking the key fob, no reassuring flash of the indicators, and not the reassuring clicks and clunks from the central locking. Must have left the car open managed to get in and press the on-off switch no chimes, no bright dash display , and a faded message saying key not detected, and a logo of the key fob and the battery.

Reaction 1. Battery in key fob must be caput. Replaced battery still no, key not detected.
Reaction 2. The 12 volt battery must be flat, the car isnt moving an inch tonight. Noticed the light switch was in the on position but I did think it was impossible to leave the lights on with the car switched off even if it was unlocked.

The 12V battery is 6 years old, up to now been fine if a little low voltage wise compared to what you would expect on an ICE car, and a reputation for not being very well maintained by the 12v charging systems on the Leaf.

Anyway the camping out was saved by a borrow and return arrangement with another in the family fleet, and a sort it out in the daylight task for this morning.

Armed with multimeter and a spare 12V battery, and the jump leads, and sockets and spanners I arrived back at the leaf this morning. I had purposely popped the bonnet the previous night and left it open just in case the car had decided to lock itself overnight. Put the multi meter on the battery 4.5 volts. That wasnt going to work anything.

But what did I do...in an automatic sort of reaction after checking I shut the bonnet

Yes and the doors had locked themselves, and there wasnt enough poke in the keyfob or the car to re-open them. After the expletive cry, I was gently reminded by calmer voice..."there's a key in the fob that should open the door".

and indeed there is, and thank goodness it was there, and it did open the door. 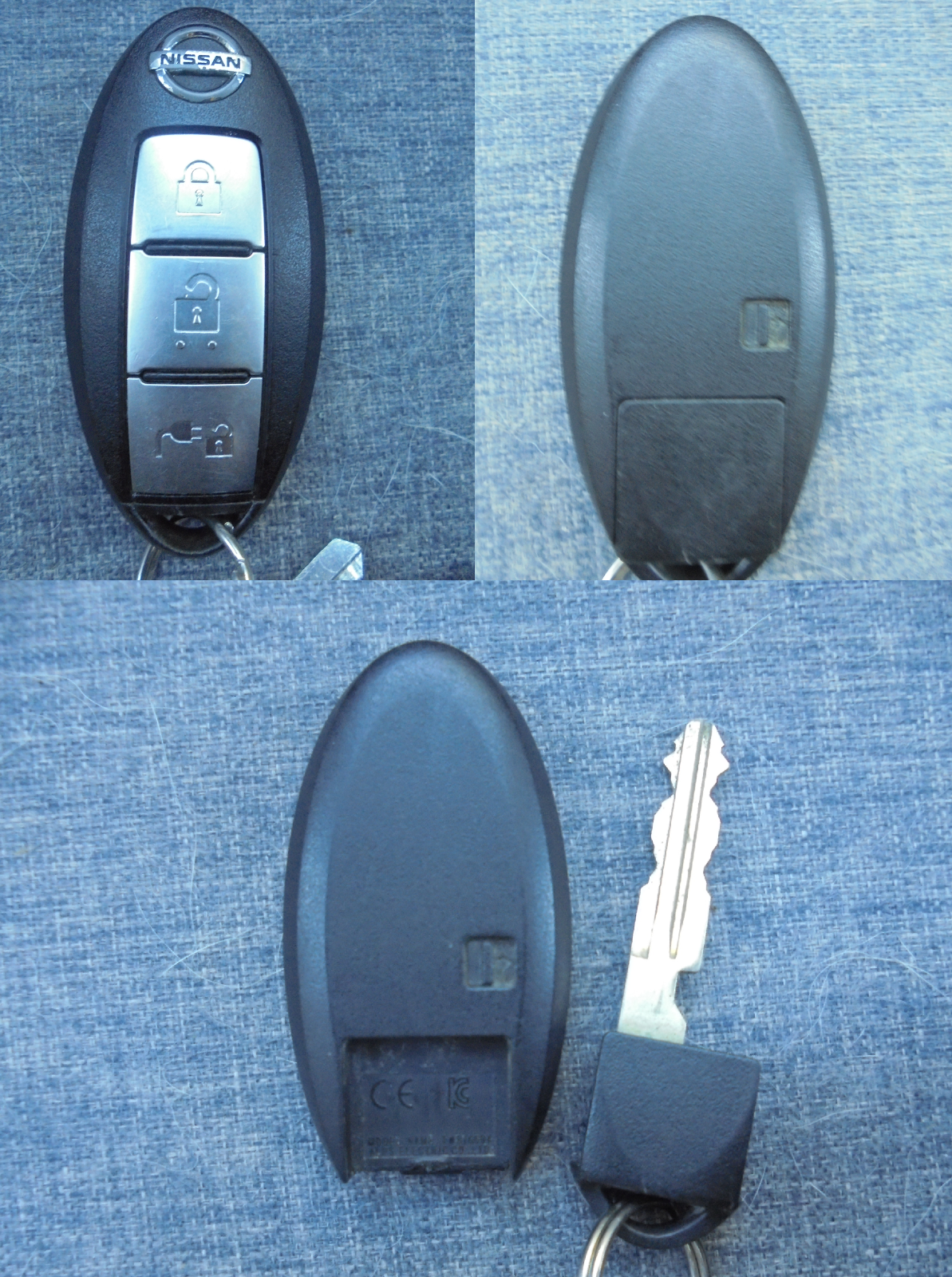 Replaced the 12V Battery, no choice of following the Nissan Official Procedure could neither switch the car on or off, just a simple Negative first, positive second on removal, and positive first negative last on reconnection. The dire warnings about reseting this that and the other didnt materialise. Radio stations, windows, charging settings etc all as before.

Somewhere in the Scottish Borders we came across this. DVLA records would seem to suggest that it is parked up and going nowhere. It is probably the most un ev looking type EV, and one of the pioneers in the first of the new generation of EV's using lithium ion batteries. In the UK, Q1 2021, there were 47 Licenced and 12 on SORN. This one is on SORN. All were subject to a battery lease from new. It was not a purpose built EV platform, and the battery which protrudes up behind the back seats as well as under the vehicle, is basically an assemblage of Nissan Leaf type battery modules in a can"

Reason its up on the Bargain Basement thread, I guess including that one in the picture, is that they are reaching/have reached the unsellable stage. Very rare in the UK now, leased batteries which no doubt continue to be under lease arrangements from RCI with "short and curlies" clauses which ensure the payments continue to be the responsibility of the leaseholder even if it is on SORN or even if it is inadvertently scrapped with the battery. The battery never belongs to the owner of the car. Beware the leaseholder remains responsible and RCI make come knocking for full reimbursement for their loss should their battery and your car have gone to the crusher. Fairly safe to assume that the one in the car park doesn't have a full dealer service history and having the traction battery sit around on SORN for months/years is self induced battery degradation....exit responsibility for RCI replacing the battery in spite of still taking the lease payments.

How much a project though? Purchase price has to be next to nothing, and for cars of that vintage, original batteries aleady recouped by RCI through 7 years of lease payments, I would guess RCI want rid, and unlikely to offer a new lease which to be honest they could not fulfil their side of the arrangement as Fluence batteries are no longer made. My guess is they would be willing to ditch the existing ones. The mechanicals of the Fluence are the same as the ICE model which has has a long production run overseas 2009-2020. Battery Packs, although an odd shape projecting up into the boot, are construct of Nissan Leaf type Modules probably the most available second hand from breakers or maybe even new.

Looks like a perfect retro project to me!! Buy it for a can of KP's, drop in a huge gas guzzling V12 and go taxiing in Glasgow?

How many Duracell AA's would it need?
Top

I got an email yesterday offering me a Duracell solar storage battery but it seems to be only available to customers of one energy supplier,
I'll be investigating later, it's reckoned to be half the price of the Tesla offering.
Top
Messages: 438