Very nearly achieved four eco-driving trees on the journey back from Scotland today.

One of the more scenic charging locations

BB Leaf having a drink of juice

The Bargain Basement LEAF with its shiny ears is always one of the best-looking cars in the car park!

How to block in an Audi

Cant see much difference myself, looks about the same size, the model 3 has a little bigger backside but not much, we are both lined up pretty much the same at the front, and I definitely wouldnt want to fork out £799 to £999/month on subscription, depending on spec, for the privilege of use of the less bargain basement car of the two for 1000 miles a month.

As for performance and range well you pay handsomely for both, which for me is perfectly adequate in the red one with the shiny ears.

This is My most frequent charge up choice

usually with charging in the range 20% to 80% it only takes about an hour and a half.

When we are out and about we use a Chademo 50kW Rapid Charger which in around 40 minutes charges 20% to 80%.

Really at this time of electric car development the infrastructure should be ahead of the demand. In the main its ok at the moment round here, but the single point charging location with a couple of bays often is occupied when you arrive.

Presumably the chargers being installed now do allow 2 cars to each use one of the 50kW DC chargers at the same time. 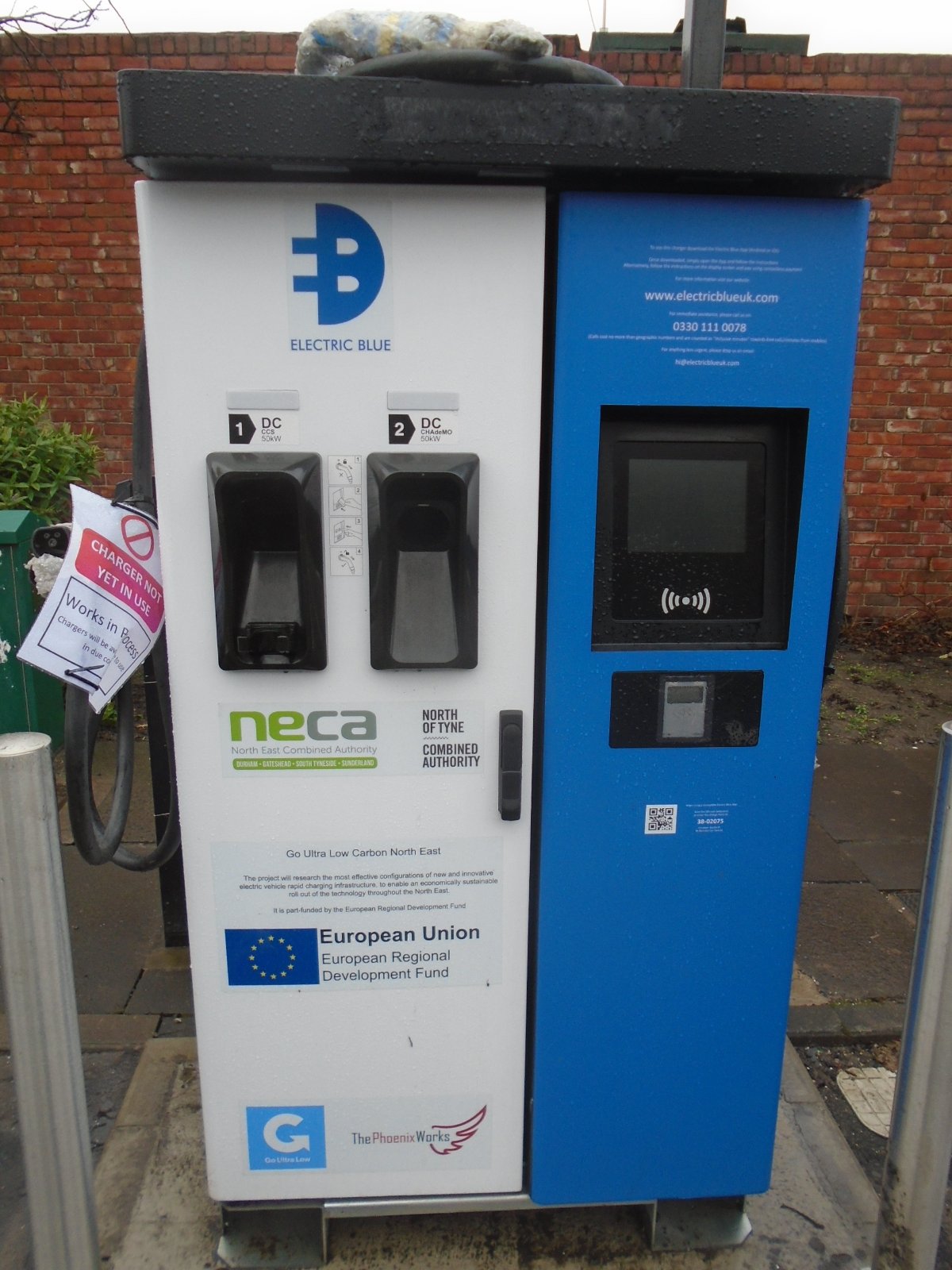 Wow, I knew that the 30kWh Leaf charged a lot faster than the 24kWh model but I didn't realise it was that much. We did a trip to Edinburgh recently and before returning home we charged from 30% to 80% and it only took 15 minutes.

And when you consider that's 80% of a battery that is larger to begin with the charge rate in miles per hour of charging is quite a lot greater. In 20 minutes it got from 30% to 90%.

My first use of an Engenie charger - a little bit more expensive than Instavolt at 36p/kWh however the free Charge Place Scotland chargers just along the road were both full with a Tesla Model 3 who didn't look like he was going anywhere any time soon, and someone with a 40kWh Leaf 2 who spent about 10 minutes trying to get the charger working - I was watching from a distance so couldn't tell if the charger had a fault or whether they were just new and didn't know what they were doing (I suspect the latter) but after watching for 10 minutes I gave up and headed the 500 metres up the road to the Engenie charger which had no-one using it and plugged in straight away. (It was also located in the car park of some kind of beefeater restaurant however we didn't go in as we were ready to go home!)

After I figured out how to use it that is!

First I thought the charge plug was jammed in the holder but I later realised the connector is locked in place until you activate the charging session. Then I couldn't get my debit card to work on the RFID scanner - until I realised that the charger had two RFID scanners - one in the frame of the touch screen which was intended for Engenie RFID cards, and a completely separate Visa contactless scanner some distance below for contactless debit/credit cards which I had completely failed to notice. Once I realised that all was good, the connector unlocked and I was able charge up.

So I've now added Engenie to the list of networks I use - Chargeplace Scotland (RFID card) and Instavolt and Engenie - who both support regular contactless debit cards.

Really at this time of electric car development the infrastructure should be ahead of the demand. In the main its ok at the moment round here, but the single point charging location with a couple of bays often is occupied when you arrive.

There are plenty of charging locations now, however a depressing number of the Charge Place Scotland installations (eg most) are still only a single rapid charger, so you have to take your chances on whether it is broken and whether it is in use, and a lot seem to have faults that aren't fixed quickly. That needs to change. How many petrol stations only have a single pump ?

I usually find it best to either go to a site with multiple rapid chargers, or one where you have to pay - you're much more likely to get on without waiting then. Instavolt is both - usually it has at least 2 rapid chargers side by side and you have to pay. I have never yet had to wait in line to charge at Instavolt!

Presumably the chargers being installed now do allow 2 cars to each use one of the 50kW DC chargers at the same time.

I'm not aware of any rapid chargers that allow both CCS and Chademo to be operated at once I'm afraid. That's not to say that there aren't any or that it won't happen in the future, but its usually safe to assume at the moment that you cannot use CCS and Chademo outputs of a single rapid charger at the same time.

Whether you can use AC and one of the DC outputs at the same time seems to depend on luck, or perhaps how much power is available at the site. Most of the units in Scotland, especially Charge Place Scotland seem to support AC and DC at the same time, however I've heard that the opposite is more common on other networks in England.
Top

Never put a stopwatch on it Simon or indeed paid much attention to the exact percentage charge on arrival, but here is yesterdays charging session at Morrisons as reported from Geniepoint.

Car automatically shuts off charge at 80%

So yesterday the info from Geniepoint via e-mail was 18 minutes and 8.48 kWh
No ideas what the charge % was showing when we arrived...probably 30% or under.

It might be the charger itself that is ending you charge at 80% or after a certain amount of time ?
Top

It might be the charger itself that is ending you charge at 80% or after a certain amount of time ?

Its one of the options on the charging menu to always just charge up to 80% I have set it at that ever since we have had the car. Only once and it was literally day one or day 2 we charged it up to 95% on a Rapid. After I discovered the setting to restrict the charge to 80% its been set at that ever since.

It might be the charger itself that is ending you charge at 80% or after a certain amount of time ?

Its one of the options on the charging menu to always just charge up to 80% I have set it at that ever since we have had the car. Only once and it was literally day one or day 2 we charged it up to 95% on a Rapid. After I discovered the setting to restrict the charge to 80% its been set at that ever since.

What year is your car ? I thought it was a 2015 ? Does it have a black interior or cream ? Do you have the foot operated hand brake ?

As far as I know the charge to 80% option the Leaf initially had was removed in 2013 or 2014. I would dearly love to have the option to charge to 80% as it is much better for the battery, unfortunately I have to do it manually if I want to.

Can you show a picture of the 80% charge option in the menus ?
Top

The BB LEAF is a 65reg September 2015, black interior, and foot-handbrake.

You turn it on or off as you wish.

Came across a bit of charger queueing today, where a bit of local knowledge helped a great deal.

The one in the carpark behind the castle had two vehicles occupying the ev charging bays. Was going to see how long they had left when there was a toot from what turned out to be a waiting Leaf. Obviously wanted me to know that he was going to be next in the queue. I pointlessly confirmed that by winding the window down and asking him.

He was one of these people of few words and maybe just the hint of an attitude and wasn't exactly grateful when I said if he was in a hurry there were 2 pay as you go chargers next to M&S on the retail park. His passenger said they had been waiting an hour, and clearly Mr Grump didnt want to head off over there when he had been waiting all that time. Probably imagined I was just trying to leap in ahead of him!

Anyway there is another free charger at the Leisure Centre and thats where I was heading, because those two on the charger can park up to 3 or 4 hours with a disc, and not every charger user comes back when their charging time is up.

Leisure centre one was free as were the 2 at M&S. Maybe he should have taken my assistance.

These are the new Govt approved plates for zero emission vehicles "from Autumn" 2020. New reg's presumably. If you have to fork out anything for them I wont be bothering!

Over the border today in BB Leaf, decidedly damp for most of the day. No direct fuel charges at the chargers seeing as we were making use of our Chargeplace Scotland/ BP Chargemaster/Polar Plus card.

On the way back......achieved the full "four trees" for my eco driving

In my 20% to 80% working battery charge level four trees are the maximum possible I would think.

Bargain Basement Electric gets a run out under blue skies and fluffy white clouds. Nice place to stop off at (except on a Monday when its closed) for a Coffee and a Tarte au Citron....but probably the best Tarte au Citron in the World.

BB Leaf on an outing