I was faffing about with it so it should be there now. Didnt pick up my little description of it which I put in the Attachments tab..... maybe the file is too small

Only because Neil fixerated it

Judging by mileage/condition etc I reckon I can get around £5500 for it, which is hillarious when I bought it for £4200 three years ago and it's added an extra 30k miles in the interim...

That's why I've said the biggest bargain has already gone.

I had an intermittent eye on those, and was surprised when they seemed to drop so much into that price area, and some had only 1200 miles or so. Promised myself then I might get one in the next few months if they dropped a bit more. Never happened.
Top

That particular model 3 had dual motor tagged on the back might even have been this spec
https://ev-database.uk/car/1138/Tesla-M ... Dual-Motor

..and another thing have you ever seen such ugly looking wheels

I'm pretty ambivalent about wheels but I'd be buying some Fablon to stick over them.
Top

Flabon, as we used to call it in my Sixth Form days...
Top

PS Who did a track called Pussy Willow....answer at the Pickled Egg Jukebox

PS Who did a track called Pussy Willow....answer at the Pickled Egg Jukebox

Double points for spotting a red one, Neil - given it's a 2 GRAND paint option!!! But hey, they're saving a few hundred quid a year on fuel

I have a feeling Richard has missed the plot here

.and quite dull-looking compared to the shiny red leaf with the silver ears next to it 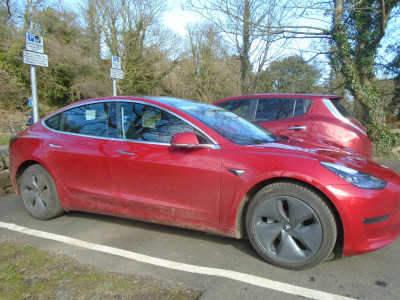 Looks like they skimped on the 19" Sport Wheels they are £1,450 extra. Maybe they just designed the standard wheel to be so hideous that most people would have to opt for the Sport wheels extra

I have a feeling Richard has missed the plot here

It would seem that I have missed the plot really!! Sorry Richard, the order of posts confused me......back to my cave!!

I take it from the lack of posts Neil that the Red beast is not seeing much if any driving during the lockdown ?

If so I hope you're keeping the traction battery between around 50-80% and not letting it sit idle at full charge ?

The Ion is getting a little bit of use (once, maybe twice a week) for short grocery runs but nothing like it would normally be doing of course... and I've been a stickler for not leaving it at 100% charge during these long weeks of warm weather where it is sitting mostly idle.

It's a bit of a pain to have to check on it and manually unplug it at around 75-80% (as it doesn't have a charge to less than 100% feature) but for battery degradation reasons it's well worth doing.
Top

If so I hope you're keeping the traction battery between around 50-80% and not letting it sit idle at full charge ?

I hit 10000 posts on the FCF Simon at the end of March, and took a bit of a sabbatical from posting, but was still an active spectator of all things FCF. Many of the things I enjoy keeping an eye on like classic car auctions and car news/electric vehicles/energy etc were all suspended and subsumed by the only story in town. I love the quizzes, the whatsthisthens? and the music and various other random links the FCF throws up and I get far more enjoyment from participating than spectating so after a bit of a pause ...active posting again!

Probably similar for others, maybe even yourself. I imagine your plans for a change of vehicle are probably on hold at the present time.

You are quite right the Leaf from doing 1000-1200 miles a month has been doing next to nothing. More good luck than good management I pretty much have fitted in with the 50 to 80% charge bit. I always just charge up to 80%. Believe me I have had no range anxiety whatsoever! More in concern to limp along the 12V battery, I have been doing a bit of driving just to waste miles so I can stick it on the 7kW public charger. There has been no "problems" with the existing 12V battery although it does dip down to 11.8 after being at about 12.2 immediately after a charge up. I have a new battery but while the milage is anything but normal, I'll reserve that just now.

Hope you and yours are keeping well Simon