Does this mean its tin hats at the ready time

lol, I had to make do with a plastic one
Top

Anyone got a use for parts from a 1995 Xantia TD (XUD), in white? Noticed one in a scrappies recently... info available. Will only be available as parts rather than complete
Top

Well, its all been fairly 'revealing', as hoped....

A cheap Head Gasket test kit dotted the i's and crossed the t's, a worthwhile investment of about £8

I enjoyed myself giving it a damn good thrashing on its last run up & down some local lanes. I stopped short of red-lining it, but did rev it to 4k through the gears; didn't know it could go so well!! Surprisingly such severe driving found the gauge staying well within sensible limits, going no higher than 85c.

The Clutch isn't great: one of the Pins on the Thrust Bearing was broken, which I think is neither here nor there, and the 'Whirring Noise' alluded to earlier (much earlier) in this Thread is obviously from the Friction plate (loose Springs maybe), it rattles well when shaken with my centre-ing tool... but I've not bothered to remove the Pressure Plate from the old Engine so I've not actually seen it. I'd already fitted an LUK that's fitted to the replacement lump, so its not required.... I'll never again buy Borg & Beck.

I was pleased to have got the height of the Reservoir 'bang on', crouching under the bonnet with it shut, there's about 10mm clearance between the Cap and the Sound Deadening.

The fittings have been swapped from the old Rad to the new one: three different fittings were each a PITA in different ways, requiring a variety of methods of 'persuasion' to undo, even off the car. Not the greatest design.

And as anticipated, some minor accident damage has been found beneath & behind the OS Headlight, that was easily fixed, but I've not yet loosened the fixings for the wing to see if it'll fit better; I'm feeling confident that it will tho'.

And after some consideration: I decided against converting it to non-assisted Steering, largely coz SWMBO needs to drive it occasionally, and she dislikes it enough.

Anyone know what the Box on the NS Inner Wing is btw? I've not noticed it before.

Meanwhile the 206 HDi is still running like a bag of poo at idle (only sometimes, hot or cold) and seems to be very thirsty; but its fine on the road, seems pokey enough (though I'm not sure how fast it should be), the Exhaust is clean and there's no warning lights on.

I'm busy so hopefully it'll 'keep' til the 405's sorted. I've not noticed any smells of Exhaust Gas suggesting a loose Injector, or a Diesel leak; but I've not really looked either. I'd prefer to sell it than scrap it once the 405's back on the road so hopefully the issue will eventually be rectified. I certainly better not keep it too long coz I've been finding it far too easy to drive it well in excess of national speed limits, an issue I don't have with the 405!
Top

The 206 may have a sticky injector, my 307 did and it idled horribly but drove perfectly. A £15 injector from ebay fixed it.
Top

Thanks Doctle, will something like this show as a 'Fault Code' if I buy a Lexia?

....I've never had one, but clearly the difference in the sale price of a car that's running properly to one that's not will be a lot more than the cost of a Lexia, so it looks like I'm going to have to invest
Top

To be honest mine didn't show any faults, the injector was £15 and the washer in Ireland was €3.99! It's easy enough to change an injector. I did a leak text with bits of tube and empty water bottles to identify the bad injector. I believe on Bosch injectors you can remove the plug off each injector in turn to identify the bad injector but I didn't know that at the time. My leak test kit was a bit Heath Robinson but it worked.
Top

It was nice to start re-fitting things earlier

I'm keen that my shiny new Rad stays shiny and un-damaged, especially in the course of fitting the replacement Lump, sometime soon

and the Exhaust Manifold & Resonator are Shiny too, rather needlessly so; but I'm not buying a different colour can of VHT for summat that won't be seen, maybe it'll seem less dark down behind the engine next time I'm spannering

ooh, valuable advice, noticed after my post above, thanks again Doctle.

I'll keep my money in my pocket then [more to the point, not add further to my debt].

I was wondering how I'll work out which one the issue's on and unplugging one at a time sounds cheap, simple and reasonably infallible....

hope I don't regret such words

Nowt wrong with a bit of Heath Robinson btw!
Top

Check whether they are Bosch or Delphi before taking wiring plugs off. I believe the wire off on a Delphi injector can do a lot of damage. If you need a Bosch injector you can have one for the cost of posting it. BTW the injector removal looks a little daunting but it's really not too bad and if the injector is stuck there's flats on it and wriggle room to get it out.
Top

Prices of the Estate in particular makes me wish I'd've known about it in advance and that I had some proper off road storage..... bet SWMBO wouldn't share that opinion though, and from a 'getting it done' point of view, I'd never cope.

Some of the Mk1 and 2 Escorts looked ridiculously cheap, along with the lovely little Beagle HA Camper.
Perhaps it wasn't publicised well. I'm sure a number of them will be finding their way onto a well known auction site soon for 'proper' prices to be realised.

What would I have taken home? I'd've been torn between a number of em
Subaru Brat
Aforementioned 504's partic the Estate, bet that'll be Africa bound soon
Ambassador.... so...ooo rare, Princess was nice too
of the Citroens it'd probably have to be the GS, an early one I think

Or for something that I could just start up & use, the Nissan Sunny; once such a common sight
Top

Did I just call a Vauxhall lovely?! Someone call the Doctor!
Top

Thanks again Doctle, have made a Memo to that effect, so that I can take you up if need be once the 206 gets some spannering.

Hopefully its only about a fortnight or from being sold, so if anyone wants it, shout. Don't forget that its a Cat 'S'.
Top

Nice find PUXA. A friend of mine has a Renault 4CV which was always under a tarpaulin on his trailer in an apparently awful state. He has spent a good deal of money getting it professionally restored by an outfit in Lincolnshire, and now.....the transformation is fantastic, and over the long term he will probably recover his restoration costs.

Now no doubt someone could do a similar thing with this Fiat 124 Coupe which caught my eye, but even in its current state it achieved £2,400 at that auction. 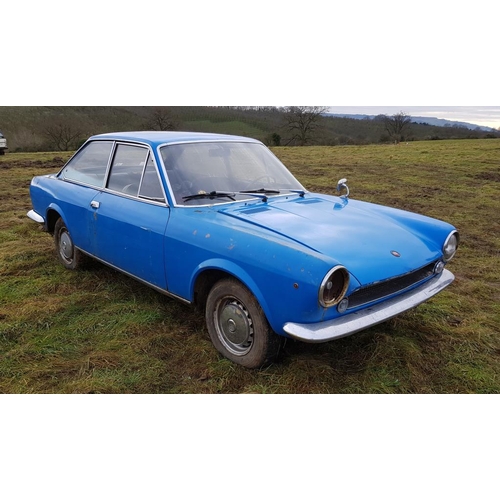 I think to plump for vehicles in the barn-find or less than barn find state, you have really got to want the finished vehicle. I imagine thats why the Fiat got the price it did.