Watching tv last night I saw, on S4C a bit from I think Scotland about wave power.
The developer found that he had no market for it because the Grid was 'full', so in company with a local wind farm they developed a system for storing the energy by turning in into hydrogen.

They used the hydrogen to supply power to the ferries while they were in the harbour and are hoping to develop systems for powering the drives for the ferries instead of the diesels currently used.

You might be able to view it on iplayer, it was Llanw, the last episode.
Top

One problem with power generation is power storage. Even with the best will in the world batteries are not that efficient. One company in the USA is trying to use gravity as a storage medium. They have built (what appears to be) a large railway shunting yard on a slope. There are numerous carriages with heavy weights built onto them. When there is an excess of power these trains (using that power) are driven up the slope. When there is a need, they roll back down, converting potential energy into kinetic energy, feeding the power generated back into the grid.
Top

This is it Gibbo, take it you had the subtitles on....very impressive photography
Link here
https://www.bbc.co.uk/iplayer/episode/p ... dior-llanw

Or you could maybe find it by googling "Galway Hookers"

That's the one Neil but you have to start at about 38 minutes in for the energy interest part which is described in English.
Top

Hell Razor5543 wrote: ↑
20 Jun 2019, 09:29
One problem with power generation is power storage. Even with the best will in the world batteries are not that efficient. One company in the USA is trying to use gravity as a storage medium. They have built (what appears to be) a large railway shunting yard on a slope. There are numerous carriages with heavy weights built onto them. When there is an excess of power these trains (using that power) are driven up the slope. When there is a need, they roll back down, converting potential energy into kinetic energy, feeding the power generated back into the grid.

We have gravity storage in the UK..... hydroelectric stations where the water is pumped back up the hill with excess power.

I know about the scheme in the Welsh Mountains.
Top

I think that's the only one, there was a feature about it on tv yesterday on Flog It.

It's only used for standby when everyone pops out to put the kettle on in the Coronation Street intervals.

The guy said it would run out of water after six hours if used continuously.
Top

I tried googling that and got a very different result.
Top

I tried googling that and got a very different result.

Here's a partnership for you Toyota/Kenworth/Shell/UPS


The Future Of Zero-Emission Trucking Takes Another Leap Forward 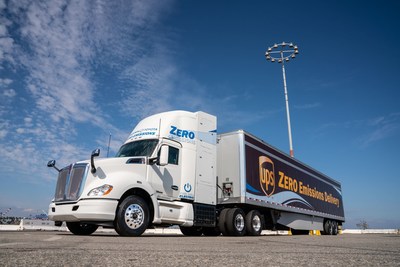 "Schot, who succeeded Rupert Stadler as Audi chairman in January, pointed to the scarcity of materials and subsequent doubts over the high-volume supply of batteries as just two concerns facing car makers."

The future could be looking brighter for hydrogen. There is plenty of it, and that's its big plus factor.

Hydrogen's minus factor is that as an energy store, it simply isn't as energy efficient as directly generating and distributing electricity and storing it in batteries for use in transport. It would have to have a "petrol" type distribution model....industrial scale processing, and distributing by road and rail to hydrogen filling stations.

But, it has the ear of a number of carmakers, and the Chinese government concerned over the supply of batteries based on current technologies and their demand for rare earth metals. Our very own Select Committee on Science and Technology, also recognise its contribution to a low-carbon future.

Not the most astounding paragraphs in their "Clean Growth: Technologies for meeting the UK’s emissions reduction targets" report released today but Hydrogen gets a fair airing in their recommendations.


"Any move to electric vehicles must have an associated environmental impact assessment, including the potential for recycling lead, lithium, cobalt, nickel and graphite. Hydrogen technology may prove to be cheaper and less environmentally-damaging than battery-powered electric vehicles. The Government should not rely on a single technology. (Paragraph 132) "

It may hit you in the home first though you could be "cooking on Gas" and some of that may be hydrogen!


36.The use of hydrogen as a fuel offers significant promise for low-carbon heating, transport and industrial processing, as well as for energy storage and to help manage intermittent renewable power generation. However, evidence from large-scale trials will be needed to allow the Government to make informed decisions on the UK’s future energy system. Demonstrating the safety of hydrogen as a fuel is a critical first step, and we commend the Government for its support of the Hy4Heat programme. The Government must complete the safety demonstration work for hydrogen as an urgent priority. The Government should also commit to completing at least one large-scale trial of hydrogen by 2025 conditional upon safety approval, and start developing now the terms for a competition to deliver such a trial. This should involve co-ordination of existing demonstration and modelling projects and should lead to the terms of a competition being announced no later than the end of 2020. (Paragraph 150)

37.Blending hydrogen into gas supplied via the gas grid could provide an initial market for early hydrogen production facilities. Once clear evidence is obtained on the level at which it is safe to mix hydrogen into the existing gas grid, and which is compatible with existing appliances, the Government should amend regulations to raise the proportion of hydrogen permitted in the grid. With higher blends of hydrogen permitted, the Government should act to support the development of this as a market for hydrogen, perhaps through feed-in tariffs or low-carbon obligations analogous to the Renewable Transport Fuel Obligation. (Paragraph 153)

While there are still cows producing manure of course they are

Not a lot of people know this (maybe cos its a load of marketing BS) but Shigeki Terashi, Toyota's Chief Technology Officer stands behind his claim that the new Toyota Mirai showcased at the Tokyo Motor Show could run for a year on the manure from a single cow!

Hyundai think they are.... £65,000 a piece, so not yet an answer to transportation for the masses, but they are selling them.

Full of gas: 6 weeks with a hydrogen-powered car
Hydrogen offers an intriguing alternative to electric power. So what’s a fuel-cell car like to live with? We spent six weeks with a Hyundai Nexo to find out