My first thought as well!
Top

The conclusion of the research study

The research, published in the journal Nature Climate Change, calculated that producing and burning hydrogen-based fuels in home gas boilers required six to 14 times more electricity than heat pumps providing the same warmth. This is because energy is wasted in creating the hydrogen, then the e-fuel, then in burning it. For cars, using e-fuels requires five times more electricity than is needed than for battery-powered cars.

Siemens in their Hydrogen Solutions Strategy take a different view, although the energy inefficiency of using electricity generated to produce e-H2, and compounding that with the further synthesis of to liquid fuels is a matter of physics and chemistry. 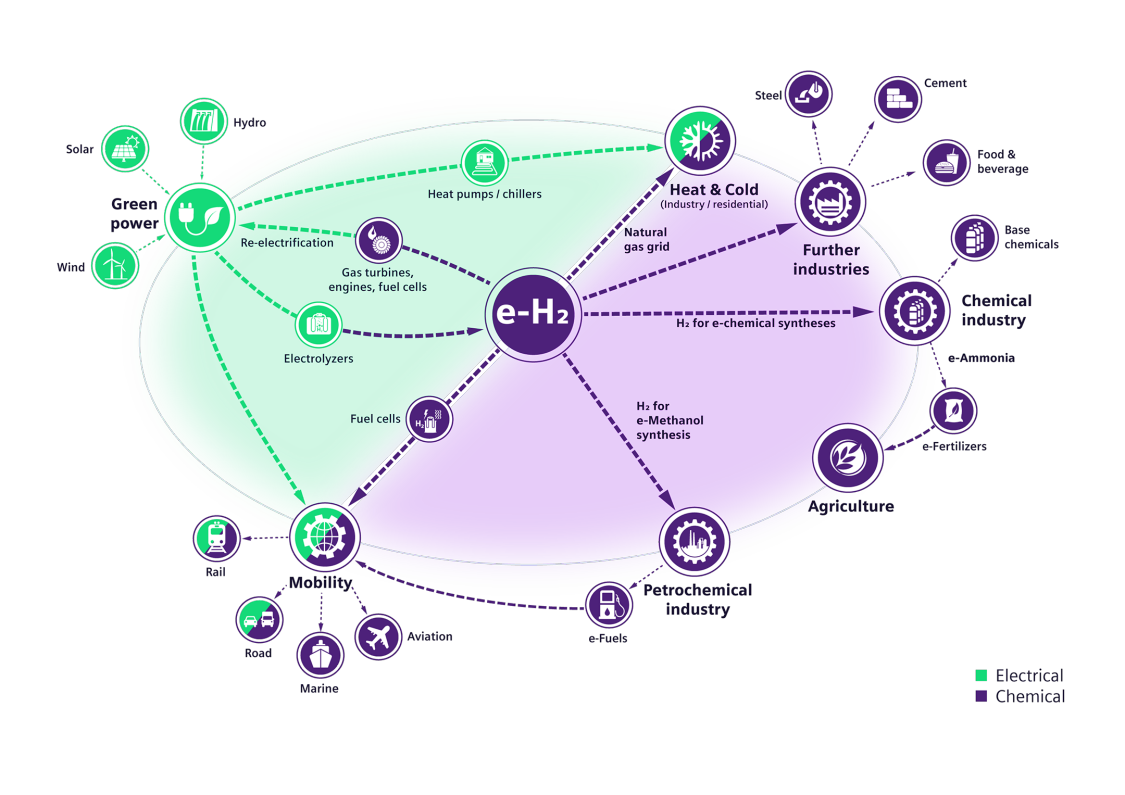 The follow on video which autoplayed on features a short talk through with the actual car.

There is no doubt in my mind that, taken as a single entity, the Hydrogen Fuel Cell EV is a far better proposition than the BEV. In terms of gross vehicle weight and range per kg of fuel mass, it wins hands down. The fact that you can refill in 5 minutes is also a major advantage over batteries. it is more efficient at transporting humans as it has less fuel load mass to move as well. Obviously the downsides are in the hydrogen production and transport costs in terms of energy required so it may not be the best overall solution for carbon reduction but it certainly offers me as a motorist a much more acceptable vehicle to use than a BEV.

It also has the advantage of being able to use the existing filling station network with the appropriate alterations to tanks and pumps. I hope somebody comes up with a far more efficient process for extracting the hydrogen needed and then, from a users viewpoint, there will be very little change in our current driving methodology.

I do suspect that some sort of H2 network will develop, and that oil companies will make Blue Hydrogen (with carbon capture and storage) and they will synthesize e-fuels. I also think that liquid fuel blends will be marketed by the petrol/gasoline companies, and installed on forecourts with more "bio content".

I do think BEV's will dominate, over fuel cell, as the numbers of new BEV's, and investments currently testify. There are enough H2 projects, but few production vehicles, and unlike the TESLA solution of putting chargers all across America and elsewhere, no-one from the H2 Fuel cell world has done similar, and established a network of refill stations to effectively sell their fuel cell vehicles.

Personally I am not bothered about charging times, and not that bothered about range for our own EV. When I read of the desire for more rapid recharging times, that involves higher power chargers, I do think naively, that seems a decent recipe for burning out a rechargeable battery, I'd rather stick to less power/slower to make the battery last longer

I watched another follow on video which referenced the first fuel cell vehicle. Those pioneers General Motors on the back of NASA developments. Needed a canny chunk of platinum for the fuel cell as a catalyst and to today they still do

Bit American, bit wordy, probably annoying presenter, annoying in video adverts etc but I managed to get through it

I vividly remember discussing the fuel cell with my mate (the one with the heat pump) when we were about 13/14. No great progress since then.
And of course the Zeta project that seemed only a couple of years away.
Top

myglaren wrote: ↑
08 May 2021, 21:30
I vividly remember discussing the fuel cell with my mate (the one with the heat pump) when we were about 13/14. No great progress since then.
And of course the Zeta project that seemed only a couple of years away.

I think your memory is awry on that, Steve. Successful and profitable energy from fusion has permanently been at least 25 years away, and will continue to do so

I managed to get through that video despite the ads etc and found it quite watchable. However it wasn't particularly accurate in my opinion. When he looked at the energy efficiency comparison he started with 100 watts of energy and then went through the losses in producing Hydrogen, freezing it, transporting it and finally using it in the car giving an overall efficiency of 38%. When he looked at the electric car he simply said it was 80%+ efficient given that you just feed the electricity straight into it. I take it then that the mining/oil extraction/hydroelectric/nuclear costs are completely ignored in his world and you just have a handful of free electricity to put straight in the car. I have no idea what the true comparison would be but I am certain he does not make a like for like comparison. If you add the electricty generation energy losses to the equation I am certain there would be a significantly smaller difference in overall efficiency!! Just saying!!

I have come across a fair few charts and discussions mapping out the differences in efficiency. They all come up with the same sort of result give or take, and its only to be expected.

The start point is the generation of electricity and BEV/Hydrogen Fuel Cells/E-fuels all start at this point in the analysis. In that vid they all kick off with 100W of the stuff! (regardless of how it was generated).

For Battery Electric the chain is
Generate electricity-transmit through grid-use to charge battery-power an electric motor
The making of hydrogen as an intermediary is always going to be less efficient, and the synthesis of e-fuels even worse.

myglaren wrote: ↑
08 May 2021, 21:30
I vividly remember discussing the fuel cell with my mate (the one with the heat pump) when we were about 13/14. No great progress since then.
And of course the Zeta project that seemed only a couple of years away.

I think your memory is awry on that, Steve. Successful and profitable energy from fusion has permanently been at least 25 years away, and will continue to do so

Always promised for a couple of years, like flying cars.
Top

I remember the headlines in the Daily Mirror in the '50s, something along the lines of "Almost free electricity with nuclear fusion". We are still waiting.

The only fusion I remember seeing in my schooldays was Reddifusion, who relayed tv signals around a cable network and then rented out tv's for customers to watch them on!!
Top

I remember them too mick, different firm.