I had trouble with turbo oil feed when I did the BX.... put the head back on with the turbo on, and torqued it down (this on the second head gasket as I wrecked the first by scraping the turbo on it as I put the head back in!) then when underneath to find the pipe was on the wrong side of the driveshaft! Not wanting to take the head off again, I bent it over the shaft, but then had real trouble getting it to start in the block. In the end I had to get SWMBO obeyed to help and turn the spanner whilst I pushed the union in, which worked.
Top

Cheers guys. Looks like i'll be lifting the head and exhaust manifold together as the union on the turbo end of the feed is properly tight and started twisting the pipe, so undid the other end and the p clamp.

I'd leave the mani behind however I want to get the turbo off as theres oil over the bottom of it and want to check its still ok. Annoyingly the tensioner bolts for the aux belt rounded out, despite me only fitting a new tensioner a year or two ago and they came out fine back then, so slipped the belt off by tipping the alternator instead, at least then the tension will be right and I can deal with them later on down the line if the tensioner ever needs replacing

So the head is off!! Ended up taking the downpipe bolts off purely so that I could swing the manifold to get the stud and spacer from behind the turbo, as there was no way of wiggling it out!

The bolts to remove the mount that go into the block/head ended up being a nightmare to get at properly so a combination of tiny sockets and spanners got it done. The dowel that goes into the head decided it wanted to follow the mount, so lots of jacking up and lowering down was needed

but it relented eventually. The spring and plunger stayed stuck in the mount as well, so they'll come out and get cleaned up.

From what I can see this might be the culprit

the metal insert was completely separated.

And anyone know if this is 2 or 3 notches? 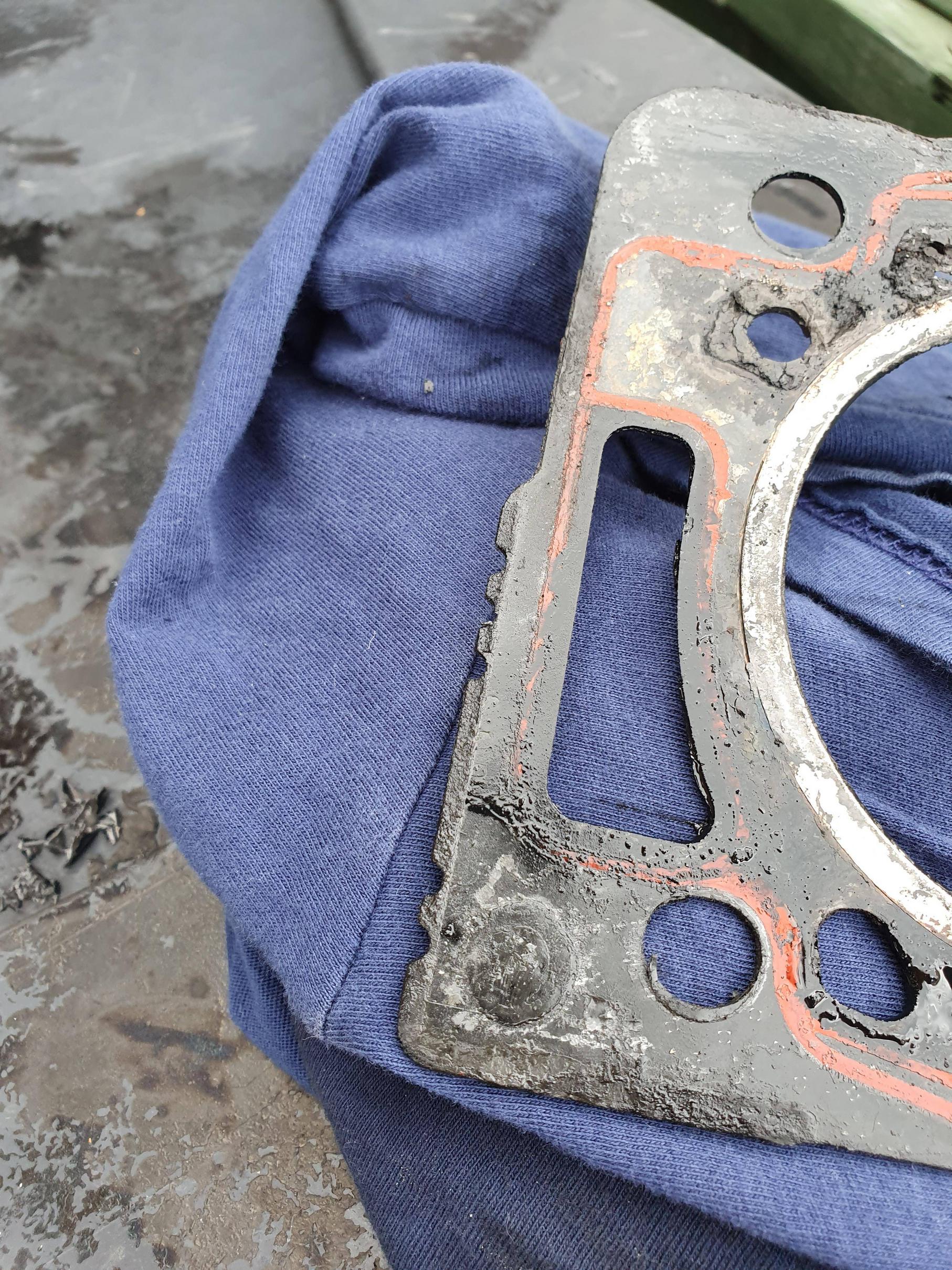 Hi Stu,
Haynes refers to "the number of holes or notches in the right-hand corner" - so looks like two.
Top

Cheers, thought so but needed a second opinion!! Now to hope the heads not warped!
Top

Have just checked a few other sites - yep, it's the corner notches.
Top

Thanks man. Figured it helps narrow down what size i'll need if it needs skimming, as i don't have access to a dial gauge (annoyingly!!).


On another note, i notice haynes specs notches for d8b d9b and then dhw dhx. Servicebox isn't showing me anything to say which it is, i guess it's on the VIN plate somewhere?

Is it wise to swap the cambelt tensioners as well? The belt doesn't look too old, the surface has a bit of hazing to it but no cracking in the teeth themselves. No play in the idler and tensioner so seems a shame to bin, but at the same time don't fancy repeating the job!! (Fwiw the water pump will be changed as its likely to be gunked up!)


Edit: to go over a few things incase someone needs reference, i ended up jamming a 10mm spanner on the end of the exhaust flange bolts and then using a rachet to turn the end thats visible from the top. If you have enough clearance (4 poster?!) you could probably do that from underneath, but on your back everything gets in the way of swinging!

I undid the oil return clamps from the hose from the turbo and loosened the feed and pushed the union up slightly so it wouldn't catch. Despite my earlier post the exhaust manifold studs came out easily, the only difficult one was the lower one on the belt side as the spacer can't come out (at least with the kkk, the small hard line that runs to the wastegate gets in the way) so removing it from the midpipe meant I could rotate the whole manifold after removing all but one nearby stud (to hold the mani in place!)

Again, with enough clearance from underneath you could remove the charger itself from the manifold.

I elected to rest the charger on the steering rack until i'd moved the head as there is just enough room for it, but with the top of the feed pipe still attached (not enough room to get 2 spanners in!) It would have risked snagging it.

Slim 13mm sockets and slim spanners are useful for the bolts that go through the engine mount, theres one recessed in the middle which required some lateral thinking, plus the lower one that also holds the cam cover is too long to remove without hitting the inside of the engine bay, so we left it in place (loosened of course) so it practically fell out when the mount pivoted on the dowel in the head.
Last edited by chinkostu on 14 Jun 2019, 23:33, edited 1 time in total.
Top

Excellent, i'll have a nosy for it!

Thanks for the tips btw, and everyone else. I'm pretty mechanically minded but HGF is uncharted territory for me. Heck I did a bloody heater matrix!

Just didn't fancy getting stuck on something trivial as Haynes is great except for a few parts where it says to remove random crap that you don't need to!
Top

Could see myself asking the same question, filed that away neatly in my 'Future Info' file.
Top

...and good luck! I think most of us know the mixed emotions during a major 'tear down', sounds like the worst is done though and you can enjoy the re-assembly back up & running.

I've also done a Matrix, but when I attempted a HG in situ back in 2008 I failed to get the Head Bolts Out and entrusted it to a garage (less said the better!).

I've since dropped two lumps, a Box only and removed the Head from one of my spare lumps no bother.
Top

Thanks! Yea now it's apart it's a case of checking the head and sourcing parts. Hopefully will have use of a valve compressor so I can do stem seals while the heads out, and can check and change glowplugs far easier!

The big issue I have is that it's on my parents drive due to MOT expiring and thats a good 20 minute drive so I can't do a quick bit here and there, and when the rain comes it basically writes the day off as i'll be soaked before getting going!!

One thing i'm worried about being a sticking point is I cracked the head bolts off about a turn before removing the engine mount so they weren't a pain to remove, but is it wise to do them up the first 2 stages with it supported by a jack, then refit the belt/mount so it's supported for the last 110ish° tightening?
Top

Valve compressor? Large socket, Ballpoint pen and a magnet for me from some years ago!


NewcastleFalcon wrote: ↑
15 Jul 2010, 20:30
One useful tip I discovered from youtube was how to dismantle valves without the use of a valve compressor.

It is basically a normal socket of the right size to press down on the valve spring ( I pushed down on a lump hammer pressing on the top of the socket to compress the spring. The bit of magic is a small magnet attached to a stub of ballpoint pen resting in the socket hole. When you press down on the socket the collets are sucked up by the magnet and hey presto, job done!

The ballpoint pen with the magnet on the end seems to have been superceded now by the telescopic magnet pen in current YT videos.

Hahaha thats an interesting way of doing it!

At the same time i've seen that only later XUD's have stem seals (maybe the egr equipped ones?) So might not even have any to change! But may as well whip the valves out and give everything a good clean!
Top
Messages: 37