Spent most of the weekend in the garden, but had enough sun by this afternoon, so sloped off to the garage.

First off, front tyre, can I get it on without puncturing the new tube Er, no... As I had air in the tube, I heard it, so only a small nick, so stuck a patch on it. Whilst waiting for that to go off I assembled the headset. Cleaning and installing the 42 loose balls is quite relaxing! I debated about which way to fit the lower yoke, and went for grease nipples facing forwards. Then another go at the front tyre, being very careful and added some chalk from the puncture repair kit, and... no, holed it again

Threw it aside and assembled the forks - which is somewhat of a game! You seem to need about 4 hands. Anyway, I got there in the end. At first the spring was catching on the head tube, but when I bolted the top of the spring in it has pulled clear.

Forks and frame are same colour, difference is a trick of the light.

Then I realised that I had put the handlebar clamps on with the bolts in the opposite way round, no performance issues, but it looks stoopid which means I'll have to strip it all off again

Which means I can turn round the lower yoke, as the grease nipples are in fact hidden on the front, and should, I think, be on the back.

You can see on here scratches on the head tube where the spring was initially catching.

Then one last go at the front tyre - lots more chalk, and going very careful with the tyre lever, making sure that I didn't have it in too far, and was very careful about wiggling it out, and success - tyre on, and holding air

Handlebar mount turned over, and lower yoke rotated. It was much easier to put them together when I knew what I was doing! Also built up the brakes onto the back plates, and then had a look at the throttle - can't work out how to get it apart, but it is working, so will have to introduce some lubrication, then see if the spring in the carb is strong enough to pull it back.
Top

A little time afforded this weekend.

First job was to see if I could straighten the bars. Gave a them a good cook up with the blow torch and then got the 3ft pipe on them, and I was able to bend them back to something like the right place. There was actually a 2 direction bend - both forwards and downwards, and since the bend was at the inboard bend of the bars I resorted to using the stilons with the jaws wide open on the section of the bars between the bends. This has resulted in a few teeth marks in the bars....

Onto stripping off the levers - the front brake and decompressor are still mostly plated, but the clutch lever has lost all its plating, so will be getting painted silver - this is probably due to the use it has seen - there is a massive amount of slop in the pivot as the lever is well worn - indication as to just how much use this bike saw when it was on the road! Plan to fix this by filing the lever flat so that I can put a washer or two in it to take the slop out. Offering up the bars to the forks shows that the mount posts are twisted a bit - I think this will be OK, but I suppose I could twist them back if needed.

Then onto the stand - as previously noted this is broken:

Previous repair by brazing has not run into the joint, so needs to be re-done. Been looking at welding it, but it seems to be a challenge on cast iron - suggestion seems to be that using stainless wire, pre-heating it, and then allowing to cool slowly (may) prevent it just cracking off as it cools. MIG brazing a possibility, but it doesn't look that easy with a basic hobby MIG, so will try the stainless wire. I also found a home for the bolts with the pip on the top that I mentioned early in this blog - they are the stand bolts. I've still no idea why they've got a pip on top though!!

Just about visible on this more wear indication there's quite significant wear on the shoulder!

Another thing I wanted to do was get the petrol tap out of the tank to strip it down, and check that I could get it out in case it decides to leak. Actually came out easily, just a light tap on the spanner and it came undone. Just as well I took it out, as the filter on the end I didn't know was there was completely blocked! Manged to get it apart, no idea if it will be leak tight or not when I finally get the tank filled.

Final bit was to have a look at the saddle. I got the cover off, and then beat the frame back somewhat into shape (more accident damage!). It's twisted somewhere so needs a bit more attention. I need to get new springs, and then I'm hoping I can bolt the old cover back on - it's a bit tatty, but I'm looking to retain originality. This was not bolted on to the bike and I wonder if there might be a bit missing where the nose bolts on to the frame - the saddle is much wider than the frame, perhaps it should have a spring in there somewhere.
Top 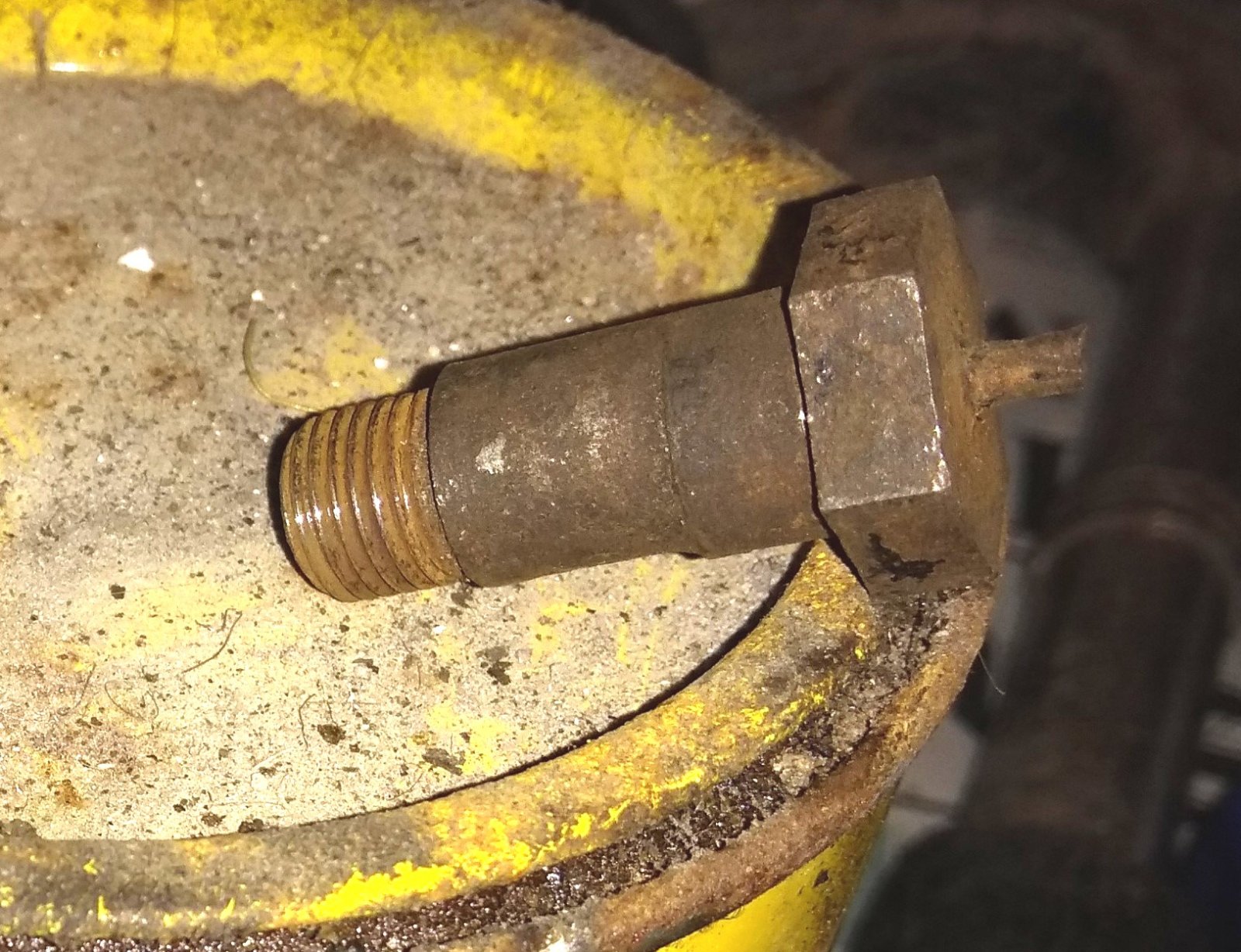 Is that pip where a spring for the stand attaches ?
Top

No, there's a massive spring, and lugs for that. I wonder if there were originally some embellishers, but I can't really see why there should be - there are no other niceties!
Top

I've got some paint on the bars, saddle frame and the inner of the flywheel(which is black, the outer and back is to be silver). I've ordered some springs for the saddle (from India - I guess there is call for these for Enfield Bullets!). I have this evening welded the stand back together. It's currently wrapped in my soldering mat and a towel to cool slowly to avoid it cracking, but it looks like it has taken.
Top

Not the prettiest weld, but seems solid

Flywheel with paint on the middle

You can see 3 small holes around the centre boss - these are not original, and were added to bolt on a (homemade of course!) pulley to allow the use of an external dynamo, bolted under the bottom of the frame.

Got out more bits that need cleaning / repairing / painting...

The exhaust shows signs of some home mods as well... there are supposed to be 2, one each side! Don't know how I am going to get these made yet....

If I happen to come across a model U, is there anything that you would like photographed?
Top

Apart from the exhaust, the one thing I don't have is the gear change gate on the tank. If you happen to see one (how likely is that??!??) the pictures and measurements of this would be go. I suspect it will be the same on all the Velocettes with 3sp boxes of the same era. There is a show up the road from here in a few weeks, will probably go along and see if there is anything I can copy...

Spent a few hours on the rear mudguard today, welding up the holes. The first few were OK, but the split right on the front bottom is being a mare - it's so thin that as soon as I start the arc it blows a hole, even with the welder turned right down, and the wire speed turned down almost too low... what started out as a small hole is now a patchwork nearly 2" square - and it's still got holes in it, and extending it at the edge is still making more holes! Perhaps I should cut it out, and let a plate in, but then it needs to be thick enough to allow the butt weld to be made!
Top

You can put a piece of copper behind a blow hole and then weld, we used spot weld tips at the back.
Top

I abandoned the kids yesterday and made good progress

Finished welding up the rear guard, and then got it and front guard, the stays and the numberplates cleaned ready for painting. Small repair made to the rear number plate which was cracked, and the front lower stay which had a loose (home made by the look of it) clamp on it. What ever the paint that the numbers was put on with was much hardier than the background paint of the number plates, as in places were it was still present, the plate hasn't rusted, so you can now see the outline of the characters in smooth metal! Last job was to mask off the centre of the flywheel and start getting some silver paint on it.

I've seen an e-bay ad for letters for the number plates, so will get those ordered up.

On the exhaust, looking at the one that is shown on the VOC Scottish section website, I'm pretty sure it has the later GTP exhaust - the silencer is a distinctive design. These are available, so that could well be the easiest / cheapest route to getting exhausts. Presumably an adaptor is required at the barrel, but I think the pipe supplier does one of these as well.

One has popped up for sale on CarandClassic (https://www.carandclassic.co.uk/car/C1093825) - so I have e-mailed the seller about getting some info on the gear change gate - nothing ventured, nothing gained! It's in Surry, and we're down there in a couple of weeks, so if contact is made I might see if I can go and see it....

Not much done recently as too many weekends away! I have managed to tidy up this week and get some paint on the guards and stays, I've also got numbers to make the up the reg plates. Hoping to get the painting finished and the guards and wheels in in the next week or so. I found some as arrived photos...

Photos 1, 2 and 5 show that the NS peg is (very) bent, I don't think I have straightened that out, will have to have a look at it - getting out the pegs and mount, which form the rear engine mount was next on the list anyway so I can get the crankcase base in the frame.

Things have changed a bit since then! In more ways than one it struck me, as I was taking digital photos with my smart phone of film photos... They were taken in 2002 probably, when...

No smartphones (pretty sure I didn't even have a mobile back then!)
Digital photography was in its infancy
We had no broadband
Desktop was a Pentium II equivalent
No laptop
No Wifi
No children (now 10.5 and 7.5!)

The pictures show there was quite a lot more space in the garage....
Top

Happy birthday Velocette - 90 years today since it was registered

I've yet to establish factory dispatch date, will try and find out eventually.
Top
Messages: 167