Sure I've seen that signage, writ large, high on a building close by the Docklands Light Railway.

I'm sure there were independant garages that sold more than one brand of petrol AND, don't forget, M-way services originally were required to offer the choice of all the major companies.
Top

This Garage in Newcastle came to mind as having a large upstairs showroom, near the central station right in town. The internet has drawn a blank for pictures even on skyscrapercity.com which does have a tremendous amount of information gathered on particular cities/areas. 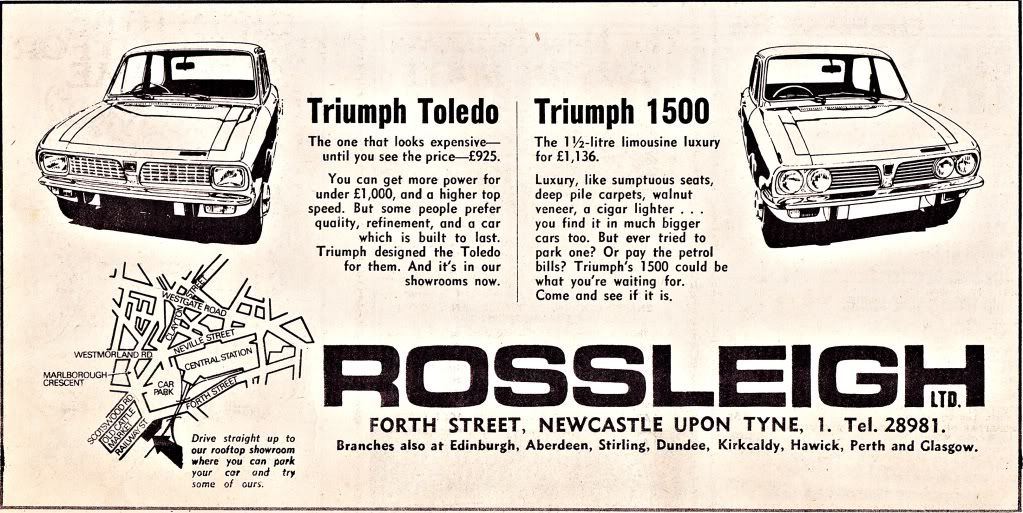 Steve's post over on POTD of Los Angeles 70 years ago and Now had this garage in from the late 1940's.

The upstairs showroom, always a joy! particularly an old school one. This one is at Knighton in Wales.

Not a Garage but just a sign stuck at random in a garden. May have come from the village's former garage.

NewcastleFalcon's post about his Chargeplace Sporranland card coming from my old stomping ground of Shoreham-by-Sea reminded me of the garage my late father used to use just to the west of there. I can remember they had a turntable in the workshop and I could never resist nudging it around with my foot when we visited

It's long gone - replaced by a petrol station - but searching on the name turned up a photo of one of their other branches with a lovely display of rather lightweight vehicles on its forecourt.... 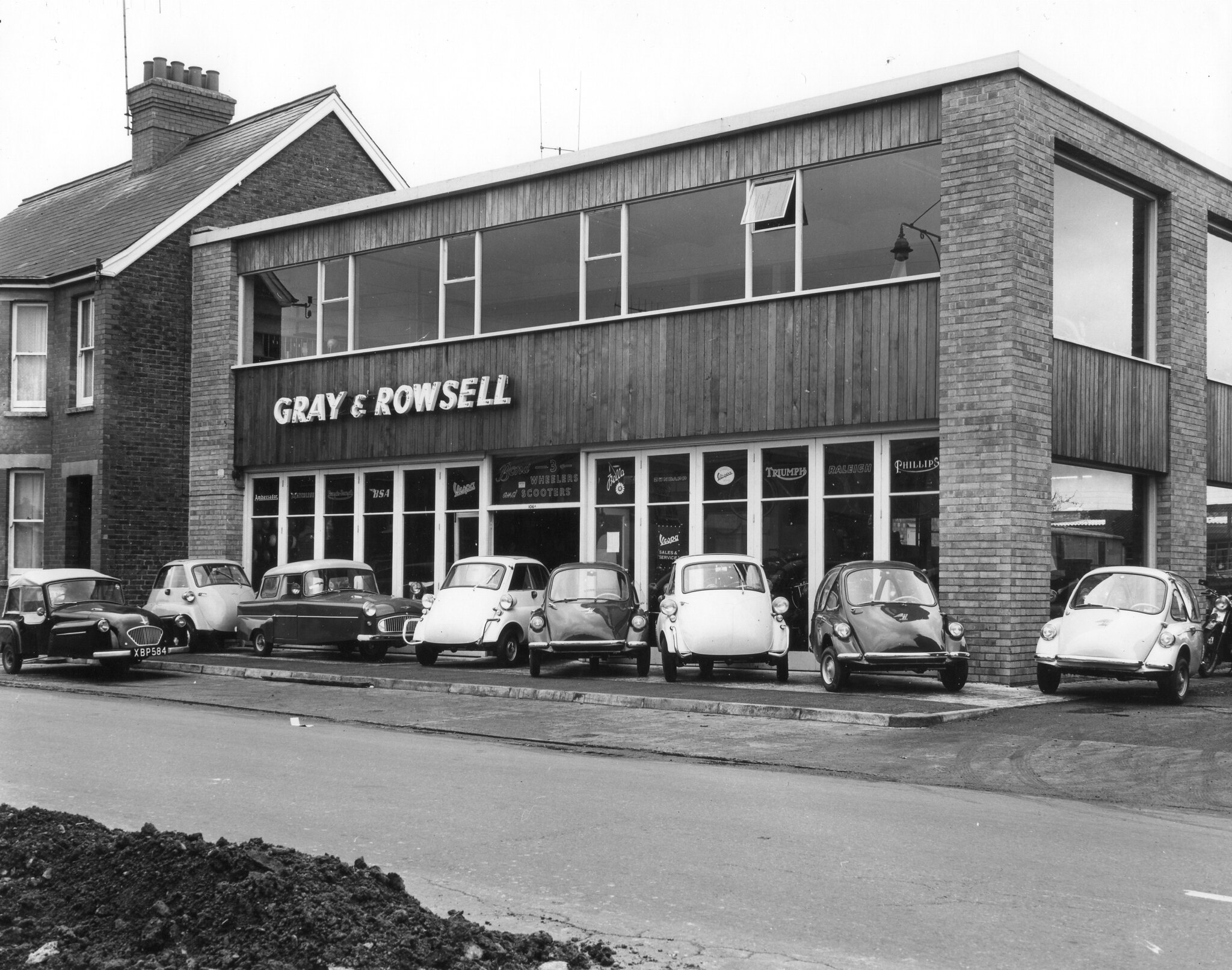 Excellent post Bobins, you did well to dig up the old thread. Now I like the idea of the turntable, to paraphrase a simple minds song, "Someone, somewhere....". on the Internet will have a picture of a garage turntable.

Off to the Pickled Egg to put up that random tune which has just arrived in my head......

The Raven Hotel Shrewsbury comes up with the goods

..and close on The Raven Hotel's heels up to Fife.....and Goodalls of Dunfermline, although not such a good picture.


At the start of the motoring era the storage of petrol created obvious safety problems for motor dealers like Goodall. Their first petroleum spirit storage licence was for seventy gallons which was contained in two gallon tins and delivered to them by horse-drawn lorry from Dunfermline’s first oil depot at the old Colton Station in William Street. Goodall’s first petrol storage tank, installed after the first world war, held 500 gallons; the petrol being transferred to the customer’s car by a hand-cranked pump. On a busy day the pump attendant’s life was a strenuous one. Less elbow grease was required with the development of the to and fro handle pump.

Then, in 1933, Goodall installed their first electrically operated pumps and in front of the pumps they also installed their famous electric powered car turntable. Lack of space inside the garage forced this innovation upon them. An under cover filling station with an electric turntable proved to be a sales gimmick of the first order. It was the only one of its kind in Fife, perhaps in Scotland, and sales boomed. It should be pointed out that the Fife Motor Company also had a turntable at St. Margaret’s Street, but this one was manually operated. The introduction of new regulations in 1960 meant it was no longer permissible to have a filling station within a garage and this resulted in Goodalls acquiring derelict properties adjacent to their Inglis Street entrance and locating a purpose built filling station there. 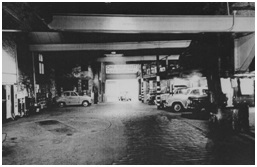 This is the picture I use in my phone directory for my local garage, evokes some memories for me and hopefully for others:

Borrowed from my phone

Do you know this one Bobins? East Preston West Sussex, now a bit of what the Americans might call "Real Estate" 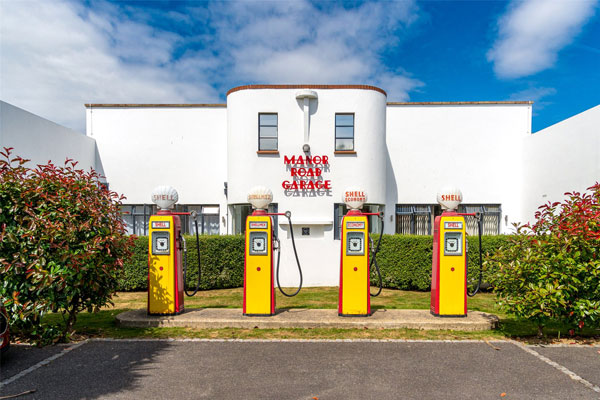 mickthemaverick wrote: ↑
14 Dec 2019, 21:02
This is the picture I use in my phone directory for my local garage, evokes some memories for me and hopefully for others:

Didn't know whether that was a stylised pic of a nostalgic typical english village scene for the front of a jigsaw but no its an actual garage and an actual place and google street view has driven past with its camera in June 2011.

You are on top form tonight Neil, my picture is indeed an artist's impression off a jigsaw box, but, as you have found, the garage and village are real enough. Perhaps I should add Westleton to my road trip route and get an up to date image with a french car in the front!!

Do you know this one Bobins? East Preston West Sussex, now a bit of what the Americans might call "Real Estate"


Although I'm quite familiar with East Preston (used to work not a million miles away from it), I'm not familiar with that old garage - now apartments. It's Listed by EH/HE and the Listing gives quite a bit of detail:

Quote:
"REASONS FOR DESIGNATION DECISION Manor Road Garage meets the listing criteria for the following principal reasons: * Historically it represents three phases of early motoring, post-World War I utilitarian workshops with a 1930s Moderne style frontage and a full set of 1940s or early 1950s petrol pumps. * The Art Deco frontage is of architectural interest as a substantially intact frontage with central fin with a mount for a flagpole, curved windows and walls and recessed bands to the wings. * Both Moderne style garages and full sets of 1940s or early 1950s petrol pumps are now extremely rare survivals.

Former motor garage. The central part of the workshop probably dates from 1919 extended in 1930 to the north by the firm of Boulton and Paul. The south frontage was added circa 1934 in Moderne style, the architect not at present known. The four forecourt petrol pumps are of late 1940s or early 1950s date.

HISTORY: On the 22nd May 1930 an application was submitted by an F H Songhurst (the owner or architect) for an extension to Manor Road Garage. The builders were Boulton and Paul of Norwich, a firm of note who also had a tradition of supplying prefabricated buildings and motor houses, publishing a catalogue of the latter. On 22nd January 1934 an application was submitted by a Mr E R Peacock for alterations and additions to Manor Road Garage, and was approved that month. These are likely to have included the Moderne style frontage building.

An advertisement for Manor Road Garage, thought to be of about 1937, survives in Richard Hollis Estate Agents guide. This specifies sales, service and repairs with cars for hire and a garage for 50 cars.

The building continued in use as a working garage until circa 1973 and was then unoccupied until the time of survey."