Just a thought but check the wiring in this block here:

Is it possible to do away with the dreadful contraption?
I'd much prefer a normal manual tailgate.

Presumably if all this pointless gubbins was removed and replaced with a pair of wonderfully reliable (and not remotely annoying) gas struts then all sorts of fault codes would be thrown up?
Top

That’s not really practical. There are masses of components integral to the tailgate. There’s nothing stopping one using it manually as it is, but I’m sure Steve just wants the functionality restored.
Top

So, playing with the tailgate at the moment, I got it all stripped down, I’ve noticed that as the tailgate opens to about halfway, the light in the red boot switch goes out and the tailgate stops moving.

As soon as I put pressure on the tailgate to close it, just a fraction the switch lights up again. And you can use either the red switch or external switch to close it.

If I try to reset the parameters ( holding the button for 3 seconds) I get a long bleep and nothing else.
Top

There are only a couple of incidents where a single beep is mentioned anywhere - detailed with the procedures below. The initial configuration, once programmed, is retained even with removal of the battery - but I've included it here for reference.

This is the learning procedure - but it says memories can be cleared using Diagbox. As you've had a single beep, is it possible you have started the reconfiguration precess I wonder?

Learning
The motorised tailgate is delivered in "declutched" configuration: The tailgate can be opened or closed manually.
No operating of the motorised tailgate is possible until the initialisation has been performed correctly.
If a new control unit is fitted, initialise it.
N.B.: After replacing the control unit, clear the memories and re-initialise; Using the diagnostic equipment.

Didn't have chance today to carry on with the tailgate, Discovered it needed new discs and pads at the rear

I'll have a play tomorrow, after I finish sorting the brakes
Top

I did manage to get some screen shots from Lexia though

Interesting that you're using Lexia and not Diagbox or is that because you only haver Lexia installed?
Top

No I have both, it was just the first one that came to had, plus the Diagbox laptop was in the house and Lexia was in the garage 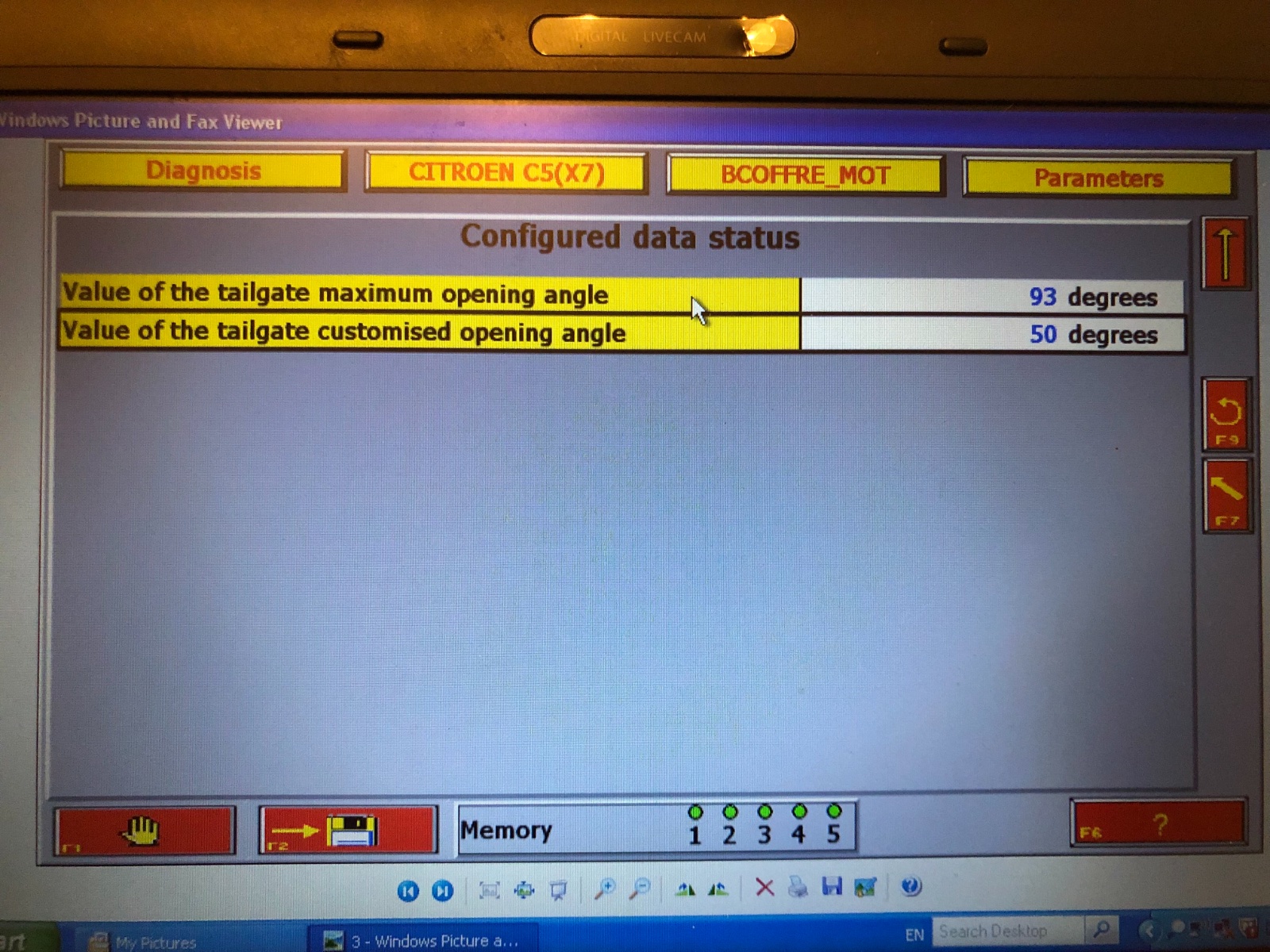 I know nothing about the Tourer but find this screenshot interesting...

In the first screenshot, the maximum opening angle is 93 degrees which would be wide open, why would the customised opening angle be only 50 degrees? That means the tailgate would stop half way open does it not?

My plan is to get Diagbox on it tomorrow after sorting the brakes, it will be interesting to see if there is a comparison and if there are any adjustments I can make to it
Top

I wonder if there's a feature where you can program it by double pressing the opening button or similar to set the opening angle.

I know nothing about the Tourer but find this screenshot interesting...

In the first screenshot, the maximum opening angle is 93 degrees which would be wide open, why would the customised opening angle be only 50 degrees? That means the tailgate would stop half way open does it not?

It's because the tailgate opening angle can be customised - but needs to be at least an angle of 50° and yes, to programme it you allow it open to the desired angle, then pause it by stopping it with the button or manually and then holding either the tailgate or the outer button in for 3 seconds, then it is programmed to your requirement - as long as at least 50°

Now I can understand that, but what I can't figure out is why the button is losing power after it reaches 33% open
Top
Messages: 79