Just caught the end of who wants to be a Millionairre, the £500,000 question was a piece of cake for close followers of the FCF, and Scotts Music Box.....

So something relatively big in the close vicinity of Watford caught fire on June 21st 1961.... Did Alexandra Palace burn down and can you see it from Watford?

er It did burn down but a few years before you were at school Mick...

Originally built by John Johnson and Alfred Meeson, it opened in 1873 but following a fire two weeks after its opening, was rebuilt by Johnson.

Not from Watford but this was literally two roads across from the school. About 100 yards tops!

I'm trying to get there without looking it up with an obvious query? Was it an Industrial/manufacturing site linked perhaps with a well known Brand?

It was a factory which made a well known product but mainly as a raw material for other factories so no real brand name. During WW2 the top floor was taken over for the manufacture of a very well known anti biotic as part of the war effort!!

I think I have found it Mick through that sort of questioning approach. Looked up graces guide for their info about Watford firms without much success. Then remembered sunny delight spread and Yeatman and Co, and put in Yeatman Factory Watford into a search. and about 4th out was this article

Then the eye-witnesses came out


Living in north Watford from 1952 to 78, I have fond memories of factories such as the British Moulded Hose. Not a nylon stockings factory as its title may sound, but an asbestos factory which I remember one day caught fire when I was in the playground of Park Gate School.

I remember the factory catching fire! We saw the smoke away across Watford from the infants playground at Cassiobury School. My mother was on playground duty and remarked to another teacher that it was in the direction of my father's workplace - minutes later a solemn junior came over to tell me and my sister he'd see my father going up in the smoke. Little horror!

Is that a choice of 2 then Mick Park Gate, or Cassiobury School I reckon you would have moved out of the Infants so I'll plump for Park Gate School.

Correct and well worked out without the dreaded G!! I have been preparing a map to show exactly where I was and there are a couple of photos on the Watford History website: https://www.ourwatfordhistory.org.uk/co ... -fire-1961

I have also put together these extracts about the factory and its history:

.........As previously shown, some 1901 residents of Leavesden Road worked in cocoa manufacturing. This would have been at Dr Tibbles Vi-Cocoa Ltd. Although Dr Tibbles advertised the health-enhancing properties of Vi-Cocoa, he neither owned nor ran thecompany. It was managed by Henri Boisselier, and owned by a group, which later became Watford Manufacturing Company. In 1899 they bought 50 acres of land bounded by St Albans Road, Bushey Mill Lane, and the railway line from Watford to St Albans. The Cocoa factory was built in what later became Sandown Road. By 1903 it employed 550 people, two thirds of whom were girls.
Watford Manufacturing Company also developed other businesses on the site; those listed for 1908......
Watford Manufacturing Co Ltd

In a letter to Watford Council it stated that the company intended to construct two roads on the lower part of the land and build a factory.
By 1903 the factory employed around 600 people, two-thirds of whom were young girls, the rest being men and boys. Although the premises were known as the Vi-Cocoa Company it was understood that the business was confined to the preparation of chocolate in its various forms. The resident manager was Mr Boisselier and almost all of his employees lived in the town.
In February 1903, a fire started in the basement of the south corner of the factory and fanned by a fairly stiff south-westerly breeze it quickly spread to become the largest that had ever occurred in Watford. The extent of the fire was so great that the works were closed and all employees received one week's wages and notice to leave their employment.
The factory was re-built. As The Watford Manufacturing Company, they masterminded munitions production in The Great War, but in September 1917 suffered another fire. A store room containing dried milk, nuts, advertising material and a consignment of Vi-Cocoa about to be dispatched to the troops caught fire and the contents of the building made possible the prospect of a fire of 1903 proportions. However the efforts of the fire-fighters ensured that damage was kept to a minimum and the factory was able to open as usual the following morning.
The Watford Manufacturing Company expected great business after the war and had a large factory built. But this did not materialise, the building became a white elephant, was unfinished and bankrupted the company in 1922. This building cost in the region of £350,000, was six stories high and had a floor space of 158,000 square feet.
The buildings remained empty until 1929 when they were taken over by The Electric Hose and Rubber Company (an American firm) and was known as The British Moulded Hose Company (who used the top floor for the production of Penicillin during World War 2). In the early 1930's the single story buildings opposite Parkgate School were used as a government training centre.
There was another fire on the site in June 1961, which gutted much of the building, which was later restored. British Moulded Hose relinquished the building in 1977 and the building was demolished.

Here's a related question from me. The matches have a James Bond Connection.

Few Questions
Have you got the book "You only live twice" in your collection?
Can you find the passage which mentions Swan Vesta?

Spoiler: show
The brand is also mentioned in the Ian Fleming novel You Only Live Twice (published in 1964). During the meeting with M, Sir James Molony lights a Romeo Y Julieta cigar with a Swan Vesta match. "He lit a Swan Vesta and waved its flame to and fro across the tip and sucked gently until he had got the cigar going to his satisfaction." (Ian Fleming, You Only Live Twice)

I haven't checked this is the one you are referring to but it is the one I found in the interview with M which is where I expected it to be as JB always uses his lighter!

Thats it Mick! Thought you might just have a copy of the book.

I've got three copies actually, the hardback and the first two paperbacks with different covers. I have a full set of the Fleming hardbacks and 1,2 or 3 paperbacks for each title depending on the covers. I made an executive decision not to buy any newer covers than the first three of each title though that collection is not complete yet! One of the items on my secondhand bookshop browsing list!!

If I ever do complete that target I may consider newer reprints but SWMBO is already complaining that of the 5 floor to ceiling and 2 floor to desk level bookshelving units she only has 3 shelves in total and space is becoming a premium for new books. I'm afraid I have to keep a book once I've read it, other than library books of course, and if more space is needed I usually have to select and dispose of an author's complete works into loft storage. I also have 3 6ft wide bookshelf units down in the man cave but they are mainly manuals and text books etc. My Fleming Hardbacks are in a vacuum sealed polybox under the bed because I won't risk them in the loft!!

Reading about the chap I posted up on POTD, I discovered that his story inspired part of the Ian Fleming novel "Thunderball". 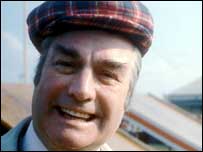 Re: Make the Link-Pickled Egg Quiz

Anyone need a little assistance?

Only just seen it, I've been out all day, give me a few minutes!!

Me thinks that it might be something to do with Herb Alpert and the Tijuana brass: