I have not had to drive today (I have a few days off, as if I did not use them up I would lose them), but I have snow chains in my van and in my car. I have only had to use them once, but they do work well when you know how to use them.
Top

Okay, that Land Rover looks like it could be a huge amount of fun in the current conditions!

I had a good old play back in the day when our road looked very much like that, driving this:

Much to my surprise, it didn't even struggle with it...Was only when we got to the other end that we discovered that the road was actually officially closed.

That thing was absolutely epic in the snow. Classic combination I guess, light weight, skinny tyres, decent ground clearance, full-time four wheel drive with centre diff-lock and perfect gearing. Never did find what the limit was - sufficient that I always ran out of nerve before I reached it anyway.

It also had the most ridiculously effective heater of any car I've ever had. To the extent that it actually melted the louvres in the windscreen demister vents!

For all it made total sense at the time, I still really, really regret selling that car.
Top

Didn't have as much trouble getting our car out as our friends did! 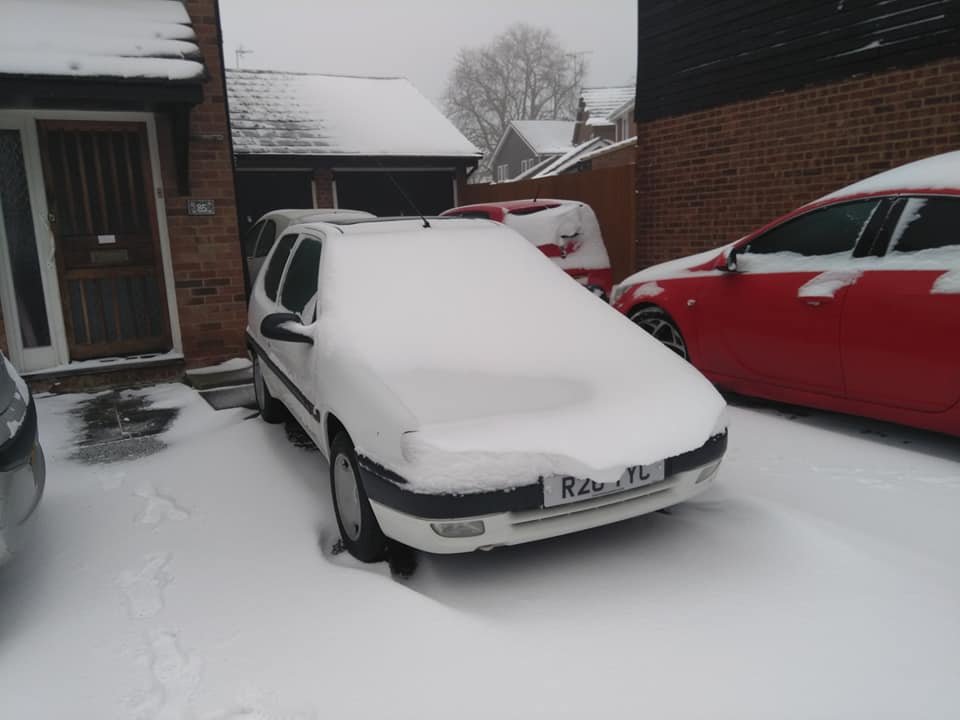 Here is the Xantia before I dug it out today...

She's all clean and clear now - and after a couple of weeks without being started and nearly a week buried under snow it started on the first turn of the engine!

I decided to dig the Xantia out today as I need to use it tomorrow and I was worried the battery would be flat again!
Top

I have 2 feet of snow on my lane and there's 4 feet of snow at the road. I have spent the last 4 days talking to only the wife, she has opinions about stuff and can talk for hours, who knew?
Top

Yes, but to us softie southerners it's a lot

Yours is a seriously impressive load I must say Simon.. Amazed the Ion is still visible!

Sadly, our parkrun was cancelled this morning

Not due to snow on the course itself - it was lovely powdery snow that's magical to run in - but because the roads approaching the area, especially the car parks, were so treacherous that they were considered dangerous for the large numbers of runners we were expecting... Safety of all is paramount at all times... Today we could not guarantee it...

I never got to wear this today as a result

I was to be duty Run Director today and now have the dubious honour of being one of the very few RDs who has had to order a cancellation... In all our history it's only happened twice - both times due to snow and ice...

I get to wear it again on the 7th April

myglaren wrote: ↑
28 Feb 2018, 18:34
2mph when moving at all but mostly stationary, cars blocking the T-junctions so a nice little gridlock - pillocks!
....crazy to see all the abandoned cars & vans, the slaloming off-roaders and madly spinning wheels gaining no traction.

Son generally has nothing but contempt for the C5 but today was full of praise, he had without difficulty driven past loads of stuck "posh" cars and was only late due to the roads being clogged with barely moving cars.

The "my 4WD won't get into trouble so I'll drive like conditions are normal" pillock. The worst offender was an Army Land Rover, with appropriate plates, as little as 3 cars lengths behind me at 20mph as we left Hospital after an appointment (I quickly let him by).

The "I'll come up to a junction and brake for it as normal from 20mph with 20yards to stop in" pillock.

The "I've had a very slight shunt and will leave my car in the middle of the lane of a main road where it happened; while at least a quarter mile tailback grows behind me.... I can't possibly drive somewhere out of the way to exchange details" pillock

The "my drive wheels are spinning as I pull away, so I'll give it the heavy right foot, rather than change up" pillock

Also noted lots and lots of cars in B&Q and Asda.... priorities eh! [try & use your local hardware store in preference where possible, in my experience they're usually cheaper and the service is far superior]

But full marks to the driver of the modern Nissan Coupe, something sporty (a 300 maybe) who did no more than 30mph on our local 60mph limit main road. Its 5miles to the Dual Carriageway and was treacherous at best. I can't imagine there haven't been many times he's driven it that slow for that long; shame it was grey.

I did take the precaution of packing a Spade and of having the 'Dash Cam' on (which is actually my phone, on Video mode, on a Windscreen Bracket), its a bit 'Heath Robinson' but for £2.49 for the bracket, it works well.

A bizarre moment for me.... coming down a 60mph rural road, wanting to turn right to visit MiL, I noted that the HGV behind me had heeded my extremely early signal and backed off. However, having slowed to about 10mph on a slight downhill, to my horror a stream of 3 cars appeared coming the other way (there's a bend, so 'visible range' is only about 200yards); can HGV man stop? ....am I gonna take the risk? No. Continue beyond the turning, switch to the wrong side of the road immediately beyond the traffic stream to let him by... blooming eck, a fourth car has appeared and I'm on his side of the road, a 1970's Volvo (haven't seen one of them on the road in yonks!) in an appropriate period shade of orange. Stick it in reverse, back it into Mum's junction, get out of the way

No such posh tyres, or posh car for me but a 405 with Kumho's on the front driven sensibly, with 'crazy long' stopping distances allowed, very light use of brakes & throttle, plenty of gentle gear-changes and 100% concentration particularly passing oncoming traffic and junctions, no problem for 30+miles, 2/3 of it on urban and country roads.

Yes, but to us softie southerners it's a lot

Yours is a seriously impressive load I must say Simon.. Amazed the Ion is still visible!

Only because it was cleared off and driven earlier that day.

The Xantia has sat since before the snow arrived and therefore had a full accumulation of snow...

The roads are clearing up nicely now, all the roads I've been on today are cleared and gritted so we're on track for work opening again on Monday!
Top 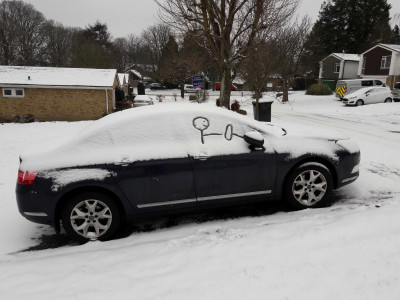 and I've just done a number 2

Apparently a road full of 5ft drifts is no impediment to your cycle ride (it's not me!)

Tried it once on deep snow and I found it a bit lethal as all my bikes have clip-in pedals and I found that the finite time required between a slide starting, unclipping from the pedal and the getting a foot down was the difference between staying upright and in control or ending up in an undignified heap in the snow

It's all thawing rapidly here now... I went for a decent run this morning, still wearing trail shoes, and at times running in the deep wet slush was hard work...

Some well-used pavements were covered in hard-packed snow and ice and that really was quite treacherous, especially as it was starting to melt...

At this rate of thaw I hope to be out on my bike later...

Throughout all of this, none of my cars have moved an inch. I've not driven since last Tuesday... I've gone everywhere I've needed to by bike or foot...

Riding a bike in a blizzard is great fun!
Top

Snow good can almost be put away now....little chance now of any more snow car art entries. Thimgs back to normal...not quite.

Had to do a bit of very early public transport this morning though only to find I had to walk 5 miles home as the bus company claimed that the roads had not been cleared sufficiently wide enough to allow safe passage for the bus on the country roads should anything be coming the other way. Hint these are not the world's busiest highways, and the road was clear!

You could look upon it as a theraputic walk I suppose!

NewcastleFalcon wrote: ↑
05 Mar 2018, 10:22
Had to do a bit of very early public transport this morning though only to find I had to walk 5 miles home as the buses claimed that the roads had not been cleared sufficiently wide enough to allow safe passage for the bus on the country roads should anything be coming the other way. Hint these are not the world's busiest highways, and the road was clear!

That's a very imaginative excuse I must say