Sorted as much as its going to be for the retest Mick.


NewcastleFalcon wrote: ↑
18 Feb 2022, 00:06
Remade the joint between the back box and middle pipe which was leaking using this stuff today, decent enough break in the weather sunny, and Dudley had blown over mostly during the night... 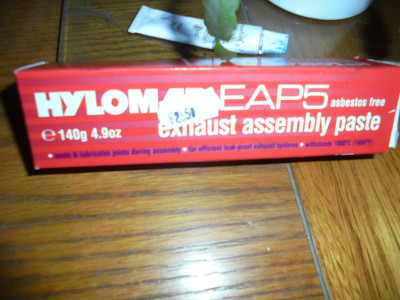 I think I've done all I intend to do. I found I had a new set of spark plugs lying around and although I've done the job, before on a Clio, i decided not to bother. They are buried down some very large holes and require this tool (the long metal tube), to remove them, and then there's stuff to disconnect/remove to get at them, so rather than disturb things I didn't bother. I will have some feeler gauges somewhere but haven't seen them for years, gap supposed to be 0.9 mm.

The other thing in the pic is a good little tool for removing the oil filter, because its in the most awkward of locations matches the flutes at the end of a proper spec Clio 2 Oil filter.

Well you've certainly done all in your power!! Good luck at the retest!!

Thanks Mick, as far as the finicky electrics and the emissions go good luck is exactly what I'll need

I'm just wondering if he can get his probe shoved far enough up the exhaust, the silencer has a downward facing short pipe

I don't know how a zero parts per million hydrocarbons test result comes out of an 18 year old Clio's Exhaust.

Well done that man!! Only trouble is we'll never really know which action cured the emissions!! But at least the car will be a bit more sprightly for this tank!!

Thanks Mick, the Lambda emissions test was virtually spot on

about 20 litres altogether of Esso Synergie Supreme 99+ Unleaded in the tank...I added 15 L this morning on the way.
Remade leaking joint between Silencer and Middle section of the exhaust.

Well pleased but like you say what made the difference or was it a bit of both? Hopefully the method could be repeated for others with marginal emissions fails.

you can in a Nissan

I wonder if the "cost of living crisis" is going to result in a minor change in car ownership behaviour for those who enjoy currently 2 car or more motoring.

If you are lucky enough to get a decent one bargain basement motoring shaves an enormous amount off the cash exiting your bank account on a monthly basis against what could be considered to be an economical transport option, a reliable low mileage 3-4 year old car.

Although the BB Micra is a fine workhorse aesthetically probably only me would put up with it, and Bargain basement isn't for everyone. Newish 3-4 old car on 48 mth PCP with £100 deposit is costing £2520/year in this example.


This is the bargain basement motoring thread. Its the perfect thread to consider such matters.

Anyone considering their options for reducing their current motoring costs or mileage.

BB Motoring side by side

Reading in the motoring press I see they're saying used car prices have risen by 30% this year so far, seems they're in short supply
The C5 got a lot of interest on Ebay and sold for the asking price to the first person who made contact.
Top

Gibbo2286 wrote: ↑
29 Apr 2022, 18:59
Reading in the motoring press I see they're saying used car prices have risen by 30% this year so far, seems they're in short supply
The C5 got a lot of interest on Ebay and sold for the asking price to the first person who made contact.

Excellent result Gibbo, and a few decent years of bargain basement motoring for yourself, well deserved after that resurrection job you did with sourcing and fitting that AM6 Autobox DIY. You would have had to fork out £2,500 easy for that job had you not done it yourself.