Little more from BB Micra's trip out...straight out the camera this time. No chalk drawing manipulation with abstractness about 7 , high colour saturation and chalk flowability high

Nice patina on the fork lift at the Sawmill

A little paddle in the ford

One of the more useful £100 purchases I have made... still gets the nod for the odd day out, as opposed to normal carthorse duties.

Out and about today

Low sun, dirty windscreen, washer jets not working. Time to get the wire out... to sort out the blocked jets.

Very close to a Room 101 candidate in the general category "plastic clips break", and also very close to winning a "most awkward to get at" award.

Here it is hiding away recessed under the bonnet. Hitting the hole with the wire....awkward, so only the vaguest of internet instructions, push the whole assembly to one side to press on one of the clips and when it breaks remove the jets assembly.

I have to report the most successful ever poking with a wire...right through from jet to feed pipe

Tip for Plastic Clips - either heat them with a hair dryer/hot air gun or run hot water on to a cloth wrapped close to them. Let the plastic heat up and you have a better chance of not breaking them.
Top

Dormouse wrote: ↑
29 Nov 2021, 17:04
Tip for Plastic Clips - either heat them with a hair dryer/hot air gun or run hot water on to a cloth wrapped close to them. Let the plastic heat up and you have a better chance of not breaking them.

Too late, too late, came the cry!

"matching quality to original fitment"
-what more could you ask for?

Out in the Micra today and had the non too pleasant experience of a rare visit to a petrol station. £20 evaporates away in quick time.

Some may say they like the smell of petrol, some may even say they love it, most people using the petrol station are probably so accustomed to it they don't even notice it.

When you are filling the tank, you cant get your nose away from it, and its just there to breathe in unless you hold your breath. I put £20 in about 14 litres. That should do me for 140 miles or so.

Had a spritely drive home. I virtually never have a spritely drive in the Leaf, very much economical pootle mode most of the time, not that I mind. The Micra surprisingly is a very decent driving car with plenty enough poke, 5 gears too. Had a heater fest enjoying a heater on full blast...you take advantage of the advantage, you become very heater conscious when your main car is a low range Leaf, (even though with the heat pump on the actual loss of range is not too disastrous).

I may have to start a complementary thread called Penthouse Motoring!!

I also went to the petrol station today to refill after my trip to Bournemouth on Saturday. I covered 320 miles then plus another 15 on the way to the garage. My trip computer showed an average mpg of 42.3 for the tank, which I am very happy with, and as a result I expected the 44.8 litres I had to put in. I was mildly alarmed at the £73.46 bill!!

However when you break it down, the return cost of transporting us in comfort and covid isolation to and from the seaside was just £35 each. Not too bad for a great day out for my passenger and 320 miles of doing what I love the most!! How much is a ticket for a premier league football match which gives you a couple of hours entertainment, possibly enjoyable possibly not depending on the result, plus the opportunity of getting grief on the way there and back!! I think I'll stick with the penthouse!!

A bargain Basement Car
A topiary Pig in yew
Where "Waters of Tynes (South and North)" meet
The former Border Counties Line Hexham to Deadwater via Redesmouth. ( at Tyne Watersmeet)

Bargain Basement Clio is back for its annual MOT prep.

Today had to get a new Exhaust Rear Silencer. Sure it was only a couple of years ago it got the full exhaust done but there's a decent hole in the current silencer. Will probably have to sort the headlights out as the clear covers are now a bit opaque, maybe too opaque for the tester.

Time for another ECP/Carparts4less visitation. Not universally popular, (as James' comments testify

), but paddling about in the bargain basement and doing about 4,000 miles at most in a year I'll not be fitting Hella headlights at £260 for a pair to the BB Clio in the maintenance fleet.

Hell Razor5543 wrote: ↑
05 Jul 2021, 20:25
Might I suggest you steer well clear of both of these suppliers. ECP (full name Euro Car Parts) has the deserved nickname of Euro Crap Parts, and CarParts4Less is their Internet brand.

When I need to use them, I use them most of the time James

. The local factors unless you are in the trade cant get anywhere near on price although I have hit lucky on some components and use the local factors occasionally after they have given me a price on the phone. Had a few incorrect oil filters shipped but in general everything has been fine. Deliver free too which makes a big difference and less hassle collecting as both outlets are over 30 miles away. Speaking as I find, they have been ok, apart from the odd wrong filter being sent. 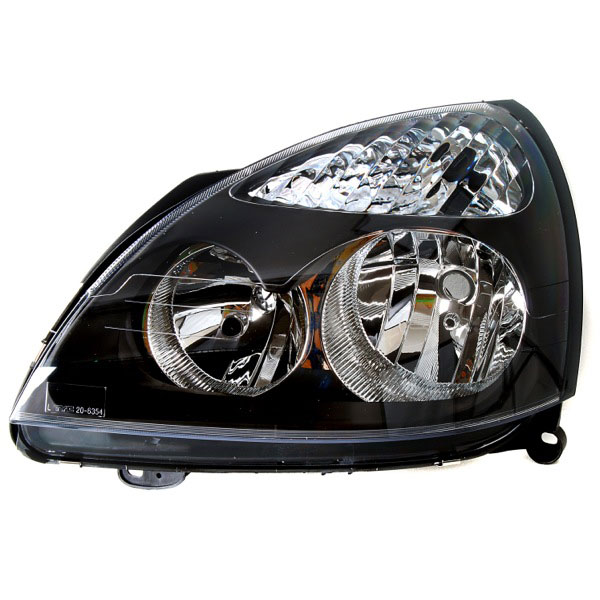 So the choice is

I wouldn't pay more than £10 each for them, many of them will be the OEM originals, and unless kept in a darkened garage for the last 18 years will probably be as opaque as mine.

E-bay......never used it, and for such matters as second hand headlights wouldn't trust a picture as to their clarity when they arrive in a package at my door and I am not in the game of dispute resolution should they not be "as described.

I do half-enjoy a scrapyard ferret but the path of least resistance apart from my skinflintyness would be the just under £100 from Carparts4less. Could attempt a polish up myself but they are probably past it now, and the equipment/product to do half decent job would probably run to over £20 with no positive end result likely.