The adventures of Michel's C3 Picasso and Yamaha MT-09

I managed to fit my dash cam in the C4 GP today. Sadly my hard wiring kit wasn't long enough so I had to use the fag lighter power adaptor. Managed to hide nearly all the cabling apart from the bit from the camera to the roof lining - about a foot on a Grand Picasso, as the camera has to be quite low down the windscreen to avoid the mirror. I've mounted it behind the rear view mirror.
Top

I've got a set of eyelashes here that originally were attached to Robyn's C1 when it was mine as a joke..

It's why that C1 is forever known as 'Eyelashes'

Jodie would wear a set a treat I reckon...

She needs one of those 'Powered by Fairydust' stickers as well

If not you'll need to identify the item number you want Mike. The only other ones are items 5 & 6 below:

Door Window Lower Inside (5) and Outside (6) Seals
Seal 2.PNG 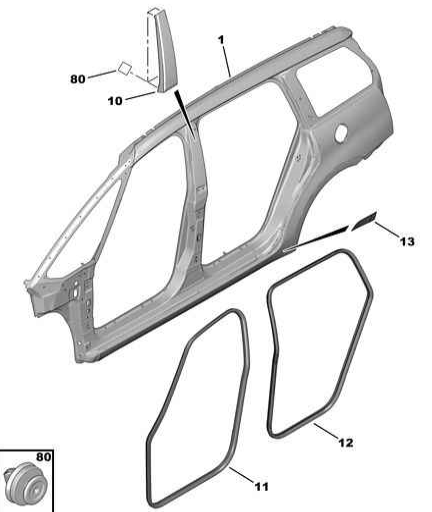 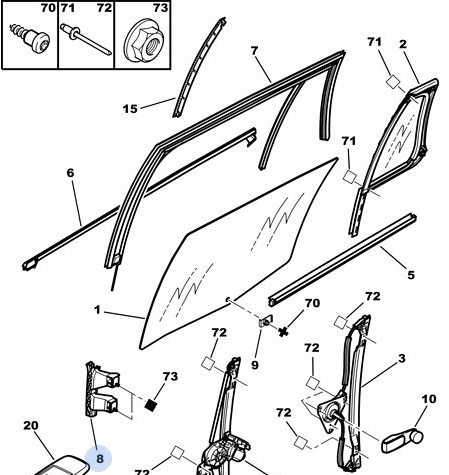 it's actually the top of the window - what would be part 7, that's leaking. I've discovered this by removing all the tape and re-adding it until the noise stops.

Is there a separate seal there, or is it part of the door frame itself?
Top

I was also happy with the fuel economy from the Grand Picasso.. especially a 1.8 petrol! A most relaxing drive.

The last tankful hasn't been quite as good as this, a measly 35.8mpg. I still don't think that's too bad, as I thrashed it up to Huntingdon on Friday night at between 85 and 90 all the way, apart from the average-speed camera zones. I came back down slightly slower, but not a lot. Set cruise to 75. That return journey netted me 32.0mpg. I went back up today via Mr. CitroJim's house, taking it normally, between 65-70 and my mpg improved to 35.8 for two trips to Huntingdon from Twyford. Not wonderful, but not wholly disgraceful considering the speed - the Berlingo HDi would have been no better at those speeds. I've no idea how a diesel GP would fare though. Better, but not hugely so, I'd expect.

The 107 just goes. The 207 just goes (it's living with a mate who's got "issues" of a divorce nature at the moment), and the Picasso just goes. Pretty boring when all said and done. I must avail myself of some autoshite, perhaps, for a laugh. Though my missus will kill me, so I probably won't. It'd be more to dispose off come July if need be.

In other news, I picked up my battery charger today which I got from Zel, via Jim - many thanks, just what I needed!

Have any of you lot ever removed the carpets from a 107/C1 of pre-2012 vintage? It really needs some rear speakers, and I'll have to run the cables up the transmission "tunnel" under the carpet, then out to the sides. I've not done such a thing on a modern car, ever. In fact, the last thing I did this on was a Capri 2.8i, a long time ago!
Top

If you are still getting a whistling - for less than the price of one of those window frames, you might want to consider some ClimAir wind deflectors. A rear pair costs £47.45 inc. VAT and delivery:

I have them on the X7 all round and they are the best available IMO, German Made and TUV approved:

I looked at addition of rear speakers to my 107 when I got it, but it never got to the top of the list.

I figured that the most sensible route was probably to pull the door seal off and go in along the inner seal. Getting the whole carpet out looked quite a bit of work! Especially as I seem to recall the seats needing to come out, and given they contain airbags (what in that car doesn't?!? Surely if you hit something it will just turn into one giant airbag and go bouncing off down the road) so I didn't really want to disturb them.

I put speakers into the rear pockets of my first 2 door one. I just pulled up the door runners and put the wires under there. They were easy enough to get up the front door pillars and over to the back of the head unit. It was a long time ago though!
Top

Cheers lads, I shall have a poke around tomorrow when I'm a bit more awake!
Top

If you are still getting a whistling - for less than the price of one of those window frames, you might want to consider some ClimAir wind deflectors. A rear pair costs £47.45 inc. VAT and delivery:

I have them on the X7 all round and they are the best available IMO, German Made and TUV approved: 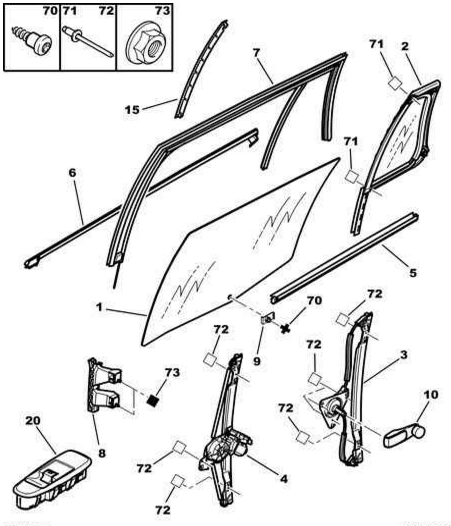 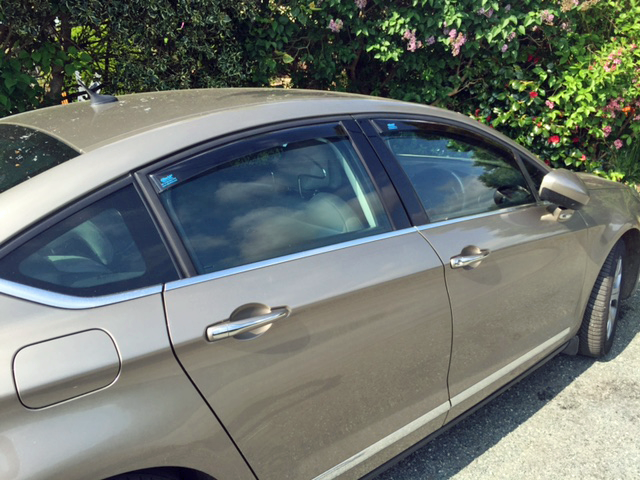 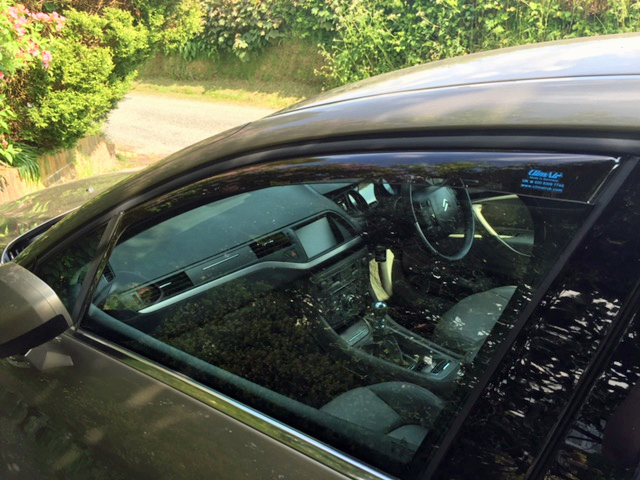 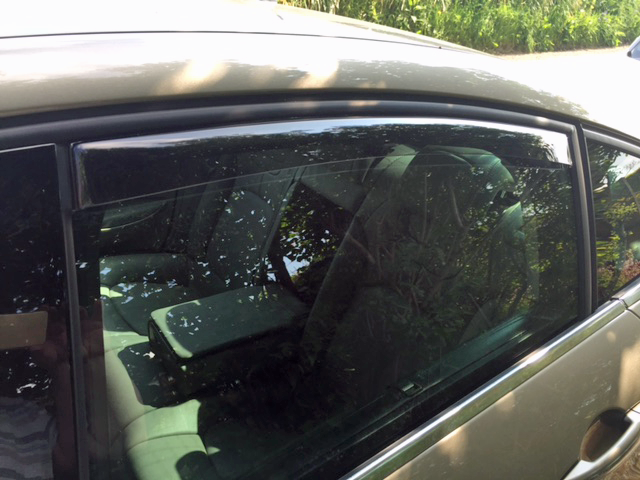 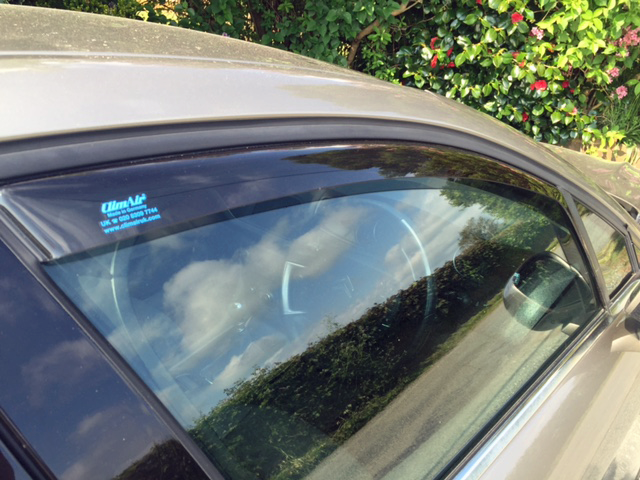 It was good to see you yesterday Mike

As you might have seen in another thread, I got my little project working...
Top

As you might have seen in another thread, I got my little project working...

It was good to see you too Jim. I always come away from there feeling more relaxed. I think it's because it's a f@*kwit free and clutter-free zone! Perhaps it's the clocks, or the enormous amounts of interesting old things (devices, not you

) to gawp at that makes me feel that way, and always ends up in me staying far longer than I intended!

Does that Radiogram also have LW on it?
Top

Even if it does look like a horological and wireless museum

Yes, it does, along with Medium Wave, Short Wave and VHF...

The only thing it lacks in the wireless department is DAB but it's about 60 years too early for that! VHF broadcasts had only just started when that radiogram was new...
Top

Even if it does look like a horological and wireless museum

Yes, it does, along with Medium Wave, Short Wave and VHF...

Wonderful! Can I come and listen to Test Match Special for couple of hours one day in the summer please? It should only be listened to on an old wireless on LW. Sure, it's cleaner on DAB or Internet but, I suppose like CDs are to vinyl, it lacks "something" despite being technically better. I'd imagine TMS sounds wonderful on your old radiogram!
Top

Re: Picasso Procrastination and Yamaha Yobishness

Well, in a reasonably surprising turn of events, I woke up on Tuesday morning a little bored, with a need to do something different. Now, it's been at least 15 years since I rode a motorcycle, probably actually 17. Back then I had ridden motorcycles for a long time, with a licence but never had a car licence. I took my car test, but totted up too many points in the first two years and had it taken away until I retook my test. Sods also took away my bike licence, which I'd got before that rule came in. Anyway, as I didn't have a bike, this didn't really bother me.

It did on Tuesday. I thought "I fancy riding a motorbike again"... Looking at my email spam, I saw one from Lightning Motorcycle Training in Reading, so I called them up.. and went and did my CBT on Wednesday, in the pouring rain.

I *absolutely* loved it. As soon as I sat on the bike, I knew what had been missing from life all those years! It was like I'd been riding yesterday. I literally got on and rode seemingly automatically. Gears, clutch, brakes - everything, didn't have a moment of transistion, didn't stall at all the entire day.

Enjoyed it so much, that I got home, got on the Internet and started looking for a bike, then yesterday, went to Newbury by train and bought this little beauty.

It's a 2006 Yamaha YBR125, with a massive 10.2bhp. It's got such modernities as always-on lights, electric start, very good disc brakes and a fuel gauge. Hopped on it, rode it the 30-odd miles plus a bit more home in glorious sunshine, though it was a bit nippy on my hands - can't find my winter biking gloves, have everything else from aeons ago and my old Alpinestar all-season gloves just don't cut it any more. They were ok for the CBT, but not at 55mph on the A4 for a longish time. New gloves, bike cover, and uprated headlight bulb already on order. I perhaps need an electrics wizard to help me install relays and other bits to run a 55w bulb instead of a 35w bulb..

Already booked my Bike theory test, then I'll get on and do the other two big-bike modules, and get something with some more grunt, though I fancy a Virago or other Jap Harley-alike, as I'm too old to be bent over a crotch-rocket, and I don't think my capabilities are up to riding one, or up to riding one for a long time. Time to cruise I think..

Best part - as an old git, insurance, for a year.... £89, including extras such as personal accident death cover and RAC cover!

I have two modern French cars. They're both petrol, and not a 308CC , so not much goes wrong with them to report. I've resolved the wind noise on the C4 GP by sticking a piece of that foam draught excluder along the offending edge for now until I decide what permanent solution to affect. As no one ever opens that window anyway, and it can't actually be seen, it might be like that for some time..
Top

Re: Picasso Procrastination and Yamaha Yobishness

If you are not careful you might well be buying another Yamaha, but with a bit more performance;