The adventures of Michel's C3 Picasso and Yamaha MT-09

Amazingly, it was clear on the way back down on Sunday afternoon, which was just as amazing. I had a lovely cruise down between 65-75mph in the Picasso and overall for the 502 miles I did, I got 41.3 mpg, which I can't complain about. Filled it up from empty - or at least the computer had gone to 0 miles left, I reckon it had 6 or 7 litres left in it as I only got 54 litres in the thing. Got there and back and to work the next day without having to put more in.
Top

In other dull fleet news, I sold the Focus ST. I didn't lose out on it, so it was ok. It had begun to really bother me, and I didn't trust the car either, despite having it fixed properly - it had just caused me too much bother and I wanted it gone. That, and after being skint in the past, spending so much on what was essentially a toy really didn't sit well with me. So, off it went, and we are down to the Picasso and the ex-Jim 207, for now. I may purchase a more economical car for myself, or herself, I'm not sure. The Picasso suits me, and the fuel economy isn't bad considering. However, the 207, for some reason (probably Mrs. Michel, who, being Colombian, has been rechristened Juanita Paola Montoya by me) can't seem to get decent economy out of it at all - she gets less out the 207 than I get out the Picasso! How, IHNFI! I haven't used it enough to determine if it's her, or the car, to be fair, though on the run back from Jim's I got 51.3mpg out of it, so it must be ok. I think she needs a diesel or a 107/C1 with air con!
Top

Even better, one of these...


... and no need to worry about any potholes either.
Top

It's a girl thing Mike

Robyn used to moan long and hard about how thirsty that 207 was...

Like you, I could get good economy out of it...

Has Mrs. Michel got some special lead soled shoes?

Maybe she drives like Robyn... Robyn amazes me - she does not hang about by any stretch of the imagination... She's a bloody good driver though...
Top

Well, the last couple of days have been interesting. It's seen the 207 go off on loan to a friend in need for a few weeks while he sorts himself out. This wouldn't have been possible without my spotting of a 107 that had all the bits I wanted - 5 doors, AC, remote locking and so on. I'm sure Mrs Michel will get more than 29.3mpg out of that... Well, I hope!

Anyone fancy a Picasso GP?

Well, I wonder how regularly she runs the engine near to the redline?
Top

I seem to recall even her getting 48mpg out of the red C1!
Top

I take it you will be wanting to Lexia the 107 (to allow your phone to connect to the ICE)?
Top

I shall not, as it has an aux-in on the head unit. Not that it really matters as it's a little noise-box and hard to hear much above 40! It's only got front speakers.
Top

I seem to recall even her getting 48mpg out of the red C1!

Since you set about customising the ka, here's an idea for the 107 Mike 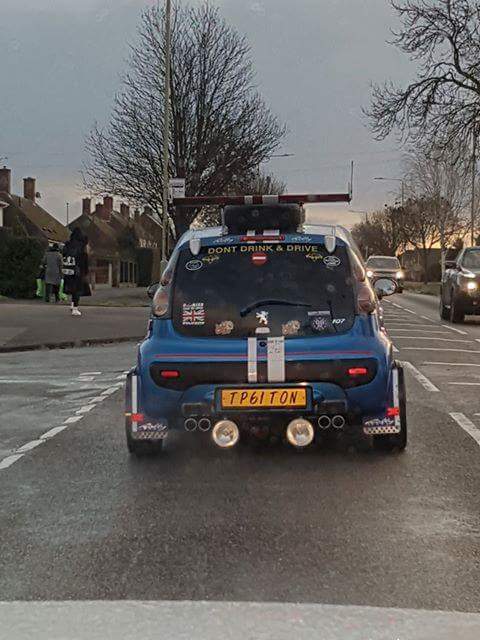 Now that is something to aspire to!
Top

Ha. I've got some Eyelashes but I may donate them to Jim's Ka.

Interesting times here. I may have to offload the C1 and 207 before long. The Picasso will go too but it will have to serve a purpose first. The 207 is on loan to a mate at the mo anyway. New job, elsewhere, where a RHD car will be annoying, but will be handy as a moving vehicle first, if it comes off...
Top

I didn't upset you THAT much elsewhere on this forum, did I?

If I did, please accept my apologies. If not, my comments still stand!
Top

If I did, please accept my apologies. If not, my comments still stand!