That girl was lucky James but it perfectly illustrates the folly of walking along with a phone in hand and earphones on. Such people are menace to pedestrians on pavements and to cyclists on shared cycleways... They have a nasty habit of not only being oblivious but wandering unpredictably all over the place...

The trend to wear earphones that cover the whole ear make the problem even worse.

I wear earphones on my early morning runs when it's quiet out with hardly any traffic as I like to listen to the wireless at that time of day. I make sure I have the volume set such and wear a set of 'phones that enable me to hear what's going on around me.

I never wear then when the roads and pavements are busy and never wear them when cycling; such acts are just an open invitation to the Darwin Awards...
Top

A LOT will, you could put you life savings on it. I cannot think I personally would ever send this type of thing to the police.
This type of stuff will give the review teams brain damage with in month !


They will be swamped by a "type" of person who thinks they "need" justice.
I cannot wait to see how many indignant (but blinded their anger) Dash Cam Warriors get prosecuted along with the driver they filmed !

IF your dash cam shows you trundling along in the middle late for miles but also shows a driver undertaking (because everybody has to move to lane three? )....sure, fine the undertaker but also the middle lane hogger.....let see what the Police do about that. Evidence is evidence in the end and you are allowed to incriminate yourself under Uk law.
Last edited by myglaren on 22 Aug 2017, 19:27, edited 3 times in total.
Reason: YouTube tags
Top

Stickyfinger wrote: ↑
22 Aug 2017, 13:28
They will be swamped but a "type" of person who thinks they "need" justice.
I cannot wait to see how many indignant (but blinded their anger) Dash Cam Warriors get prosecuted along with the driver they filmed !

Oh yes Jim. The things you see happening in film are at time a littles less worrying that the filmed reaction in the DCW's own car or what he does with it in reaction to the offender.
Top

There are strict rules regarding the collection and admissability of evidence gathered through "normal" CCTV cameras. With dashcam "evidence" being a relatively new area the police have to be sure that this new source of information is acceptable when it comes to prosecuting cases through the courts.

It may well be used more as evidence of the validity of signed witness statements, and the provider of the dashcam footage may well be required to make statements and if necessary appear in court for successful prosecutions to be made. Ther is a bit of difference between anonymously "shopping" someone with a clip from your dashcam, and subsequently having to appear in Court.

I'm not entirely sure there will be any increase in prosecutions - or at least a large increase - due to motorists sending in their dashcam footage, partly because the police and CPS just haven't got the time / money / willpower / enthusiasm to deal with the increased workload it would bring, and partly because it'd be difficult to identify the driver responsible. There was a recent case that made it on to the BBC website where the dashcam footage showed someone cutting up a motorist, then speeding off, turning 'round, and coming back and crashing into the front of their car. The police declined to do anything about it as they couldn't identify the driver who caused the crash.
The exceptions might be for serial offenders i.e. number plates that crop up time and time again, and where a collision occurs and a car involved in the collision was previously flagged with 'questionable driving'. What it may well do, however, is make more motorists more aware of the fact that their dodgy driving may well be being recorded at any time and that they don't just need to behave when there's a speed camera beside the road

Speed cameras may well help to reduce speeding in certain areas, and now the dashcams can be seen as a new (and much needed) 'Driving like a tw@ camera' to try and help reduce some of the dodgy driving going on

I've got some footage of driving in India - now THAT is entertaining! I showed it to a friend, who's a retired driving examiner, & he thought I was mad (mind you i know some Indians who don't drive when they return for a visit)
Top

I've driven in many foreign countries Van.... All were incredible experiences... Especially in and around Naples and Riyadh

Makes you realise just how good driving in the UK is... Or was...
Top

I think they are essential.
I've been the victim of having the car vandalised on the passenger side, being followed when I pull away and then accused of hitting another car.
It cost me dearly as the insurer basically told me to get stuffed because the guy had about 20 witnesses, despite the fact that the scenario they made up was impossible and the damage was the wrong colour, height and angle.
The insurer also wouldn't investigate if the guy had other claims open at the time because it "wasn't relevant".
I disagree as I think they were a crew of professional con artists that a couple of phone calls between insurers would have raised enough suspicion on to investigate criminally.
A friend of mine has recently had a knife pulled on him at a red light too, in Central London of course, thankfully his doors were locked and he left unscathed.

I agree with Zel that they should not be in view.
I would either install mine in the grill or behind the rear view mirror.
I'm less keen on behind the mirror but it offers a greater field of view so is probably the better place.
It's not worth buying a £30-40 one though, I did and I'd have been better off drawing a picture of whatever happened.

As for handing footage to the Police I have mixed feelings.
It's good because there's too many people driving like absolute tools in heavy, fast cars with no consideration for our lives.
It's bad because it will be used as a revenue generator rather than a driving improver.
Thats why it started in N Wales, the constabulary most effective at squeezing revenue from motorists whilst having absolutely no positive effect on road safety at all.
It would also be likely to cause a decrease (if thats possible) in traffic cars patrolling.
It does not take any Police time as the footage is viewed by less expensive civilian employees and sent to the officers if necessary.
The revenue generated more than pays the staffs wages which is why the scheme is deemed successful and being looked at elsewhere.
Personally I think you should have to sign up to the scheme and then the authorities have full unrestricted access to all your driving data. If you want to shop the odd person you should be driving perfectly yourself.
Top

Here's mine. What do you think?
Top

Here's mine. What do you think? 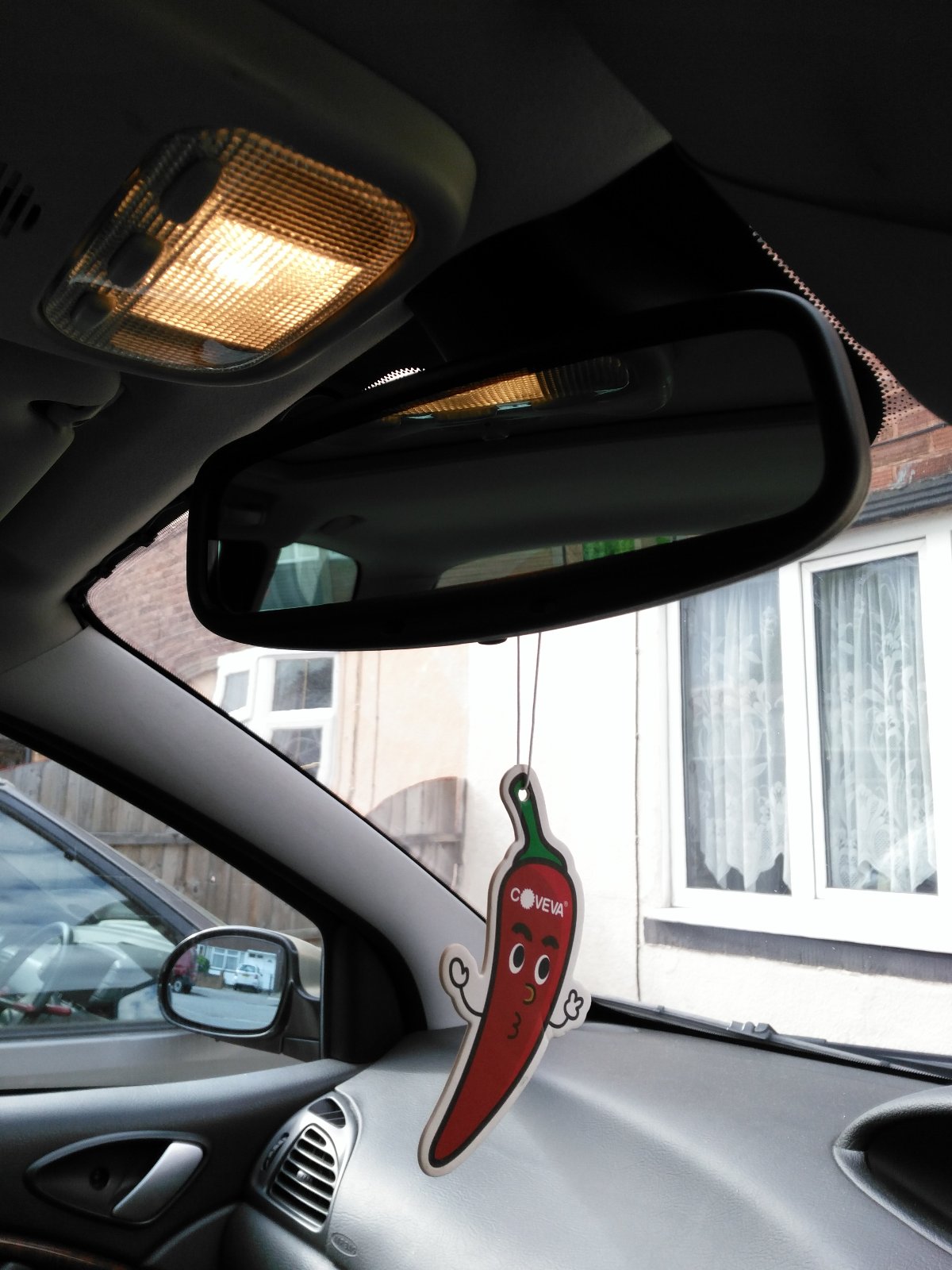 That's a very cunning disguise for it Dave. Who'd ever think it was anything but an innocent chilli dangling there

I thought it was a carrot.

No, definitely a chilli

And here was me trying to look for any tell-tale wiring from the camera tucked up behind the mirror!
Top

It's not worth buying a £30-40 one though, I did and I'd have been better off drawing a picture of whatever happened.

I paid just under £40 for mine. Quality is evidenced in my dashcam blog (links) if you haven't already seen. Originally I bought higher-quality one for 4x that amount (2k resolution, it claimed) but wasn't impressed over standard HD versions so got a refund and sought the best of the cheapest. Unfortunately, they're all still lacking in low-light capability, though it's slowly improving, just not good enough yet, imo, especially when you see how impressive certain smartphone cameras are in that respect (though they do cost updwards of half of a grand!).
Top
Messages: 43