Mandrake wrote: As a matter of fact the SM is a lighter car than a Leaf!

I was thinking just of the body weights, net of power plants and batteries - i.e. the host weight that has to be propelled. My guess is that the Leaf is a good deal lighter than an XM in this respect, but I could be wrong.

I still think a BX (with its large boot) would be a far better platform, and certainly less sacrilegious! The suspension, braking and steering issues (let alone the complete absence of electronics for these) would be a huge advantage.
BX kerb weight is only about 990kg, and that's with a diesel lump of an engine. It's load-carrying and usual self-levelling suspension are legendary.
Top

Mandrake wrote: As a matter of fact the SM is a lighter car than a Leaf!

I was thinking just of the body weights, net of power plants and batteries - i.e. the host weight that has to be propelled. My guess is that the Leaf is a good deal lighter than an XM in this respect, but I could be wrong.

Yes I was thinking that after I made my initial comment about weight, however the weight of a 1970's V6 with loads of accessories hanging off it and gearbox would be not inconsiderable! The batteries aren't actually as heavy as you'd think. I think the Leaf batteries weigh about 300Kg (according to a quick Google) which sounds like a lot until you remember that a V6 and Gearbox would be a good 200Kg or so.

The electric motor itself weighs bugger all compared to the batteries, you'd be lucky if it was 50Kg. So yes an SM would probably be heavier with a battery and electric motor, but probably only about 100-200Kg at the very most, something which the Hydropneumatic suspension would cope with with ease, probably without even tweaking the sphere tuning! As long as you had enough power and torque for the weight increase it would be fine. Maybe a slightly larger size of tyre and slightly higher tyre pressures as well.

I still think a BX (with its large boot) would be a far better platform, and certainly less sacrilegious! The suspension, braking and steering issues (let alone the complete absence of electronics for these) would be a huge advantage.
BX kerb weight is only about 990kg, and that's with a diesel lump of an engine. It's load-carrying and usual self-levelling suspension are legendary.


I think the issue is that the original poster already HAS the SM which is missing engine and gearbox, and wants to do something with it.

As I say, I think an EV conversion of it would be neat, and preferable to it being scrapped, but trying to fit all the Leaf suspension and brakes etc is just insanity and isn't going to work due to the uniqueness of the SM's suspension layout, and it certainly wouldn't ride or handle anything like an SM. Probably better to use off the shelf after market EV conversion parts like motors/batteries etc than trying to shoehorn in Leaf parts (and ECU's!) that don't want to be there.

The issue of keeping all the Leaf ECU's happy in a foreign car would be a major hurdle alone compared to using aftermarket parts and ECU's that are specifically designed to be configurable and programmable and easy to integrate into custom cars.
Top

Well you live and learn. Thanks Marc.

IMHO if the SM can't be restored, I'd rather see its parts used as a donor to help keep other 'proper' SMs on the road. It all seems a bit false to have some Japanese hooey parading about masquerading as an SM - Sacré bleu!
Top

Some other stuff to consider (if not already covered): You also need to factor in weight distribution, location of the batteries, what the suspension geometry would be like when unladen, then also laden, how will it corner, how would you attach the ABS/regenerative brake system onto the SM shell, is the length and corners of the wiring (whole loom) going to be a problem (do you need to lengthen some wires, if so will that affect a certain electrical property expected by any ECU, what about electrical shielding, will you need to do any welding/reinforcing to the SM shell? I.e Will it be safe to use afterwards? What safety factors need to be considered? How will it handle or load the suspension? How would it fall apart in a crash? (It's other peoples driving you need to look out for, your skills might be fine). And finally, as the current them of this thread is, how efficient (or powerful) will it be in the end given all the factors.

It's certainly doable. But it's a challenge. You may need to consider using parts from other cars that have similar technology.
Top

GiveMeABreak wrote:IMHO if the SM can't be restored, I'd rather see its parts used as a donor to help keep other 'proper' SMs on the road. It all seems a bit false to have some Japanese hooey parading about masquerading as an SM - Sacré bleu!

Yeah but I don't want a restored SM. There are plenty of SM's around and my car has been used to help others. The auto gearbox has been offered back to me as I have traced back the previous owners, no one is crying out for 3 speed autos

.
The engine block is in a Belgian car and the other parts not on the car are somewhere in Holland and Poland.
So my initial thought was to take Robert Opron's initial idea of a flat 6 aircooled motor into the SM, but scene tax in the 911 market is sphincter tightening for a rebuilt 911 3.0 engine.
I also looked at the old V8 quattroporte engine that they used in the Maserati of the time, but much like the 911 this might have been affordable 15 years ago but not any more.
I looked at some other interpretations of what some people have done such as Subaru SVX and other Citroen/PSA engines, hell at least it doesn't have an LS7 crate motor

So why did I go towards an electric car? From a philisophical perspective the Citroen and indeed most French cars are not about the engine. Getting into a DS or SM it is comfort above all else, issolation from the journey rather than being a part of it. You get the feeling that they only put the speedo in as a point of conversation with your passengers rather than driver involvement.
The whole car looks simple, it hides the things that other cars excentuate and yet an unimaginable amount of engineering and design is underneath. To your point about it being a Japanesse car in a coutore dress well that could be one way of looking at it. I am cool with that, but for me I don't mind as this car was forward looking and alot of what they were trying to achieve with the Citroen was quiet issolation by using technology to get from A to B.
For me at 42 I find carburetors, distributors, no O2 sensor, OBD port free cars just as baffling?
Top

It really seems the problems you are trying to "work around" stem from the wish to use the Nissan items......can these parts not be used to help fund more suitable items to power the car/pumps ?
Top

To give you a better idea of what the donor is, this is a later model Leaf laid out and running on a peg board. The motor, controller, inverter are all one silver block on the lower right, the motor is the lower third with an output at the rear with the S shaped orange cable going to it, the middle section where the black module is has a cooler and controller. The upper part where the orange cables go with a cover is the inverter.
In the earlier version of the leaf that I have these are all seperate.
The battery pack is on the left, the heat pump with the green parts for interior cooling heating are at his feet. The parts that aren't in shot are the charger cooler and 12v car battery. It is also not running a radiator or the electric water pumps as this is the only fluid other than the Brake fluid. 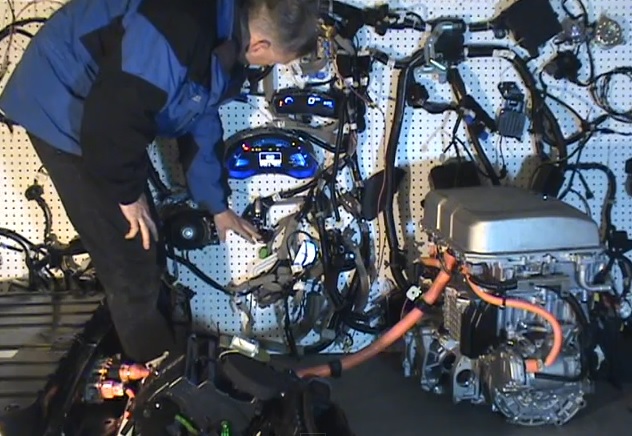 Alot of conversions trim off alot of items they don't want, but the whole car runs and operates with all of the things you have in the Leaf, heated seats, sat nav, keyless entry, quick charging, automatic climate control, cruise control, ABS, 360 reverse camera. You just unplug it, remove it, earth it and it still thinks it is a car.
Top

Can you tell us what your SM has and has not got? Do you have the front suspension and steering?
Top

xantia_v6 wrote:Can you tell us what your SM has and has not got? Do you have the front suspension and steering?


It is missing the engine, gearbox, radiator, ac pump, interior fan, exhaust system and no radio.
Some damage to the front undertray and floorpan, drivers sill has a 3cm hole of rust. There is also some rust in the passenger rear footwell. It has american spec headlights - no covers.
Interior is sunburnt and dash is cracked, carpets worn. I have covers over the seats to stop getting scanky foam in my trousers.
Otherwise it is all there and I think the fashionable term they call the paintwork these days is Patina or "original" as it was advertised when I bought it.
Top

My advice would be to find a way to fit the Nissan hubs/ABS etc to the Citroen suspension. Then all you need for basic suspension is a pump, which could be done in many ways. You could (perhaps later) upgrade the suspension to Hydractive by fitting the extra spheres, valves, sensors and electronics.

The steering is outside my experience, it would certainly be be a more impressive vehicle if the DIRAVI could be preserved. The average hydraulic flow required for DIRAVI can't be too great, as it just uses the standard Citroen hydraulic pump.
Top
Messages: 42