Travels & travails with a C15 (& other vehicles) 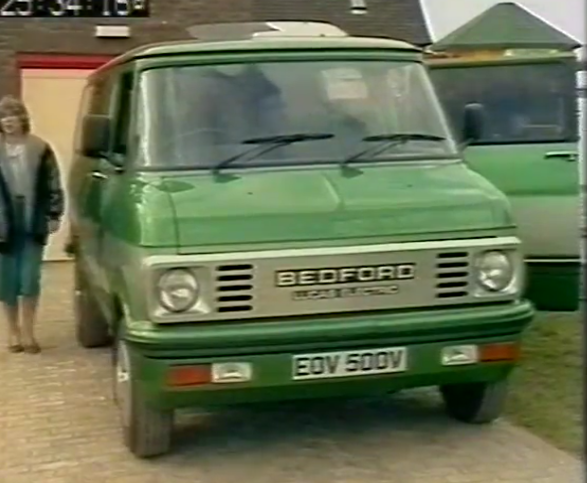 I can honestly say I've never seen one of those!

It looks a bit like a CF but not quite...
Top

Now that is different... Totally new to me too... Not sure if it was a good thing for Lucas, the Prince of Darkness, to be involved in something like that

Thinking about it, I totally should have saved that for the What's This Then? Thread...

The interior was trimmed in matching green velour that could definitely have only come from Vauxhall/Bedford at the time I reckon!

I do wonder if any survive...
Top

Here's the answer, it seems...
https://www.howmanyleft.co.uk/vehicle/b ... 0_electric
Just ONE!

Interesting to see there's any! Have to wonder if it's in a museum somewhere or in the wild.

Can't remember when I last saw a CF, even in camper form where older vans tend to still pop up.
Top

The CF was always popular, as I remember, back in the late 70s and early 80s as custom vans with really special paint jobs and very plush interiors...

Of all the vans, the CF was quite a shapely and attractive one - the best looking of its peers for sure...
Top

wouldn't call a P6 rare, whereas that particular incarnation of a CF undoubtedly was.

So what's the story/background?

. . . & what was it about my return to the fold that caused the re-wind to last August? (ironically, when the C15 was last running around)
Top

I don't think Zel was suggesting they were:
"P6 probably wouldn't be the rarest bit of British metal to be parked in our driveway in the past though..."

I'm not absolutely sure, but I think Zel's driveway might once have been home to quite a few P6's. As yet unconfirmed!

Rumour has it that the original owners of this place had a P6 at some point, but I've no way to prove it.

The van I believe was stationed here for a while during the first couple of years while the BBC were still gathering data from the combined heat & power unit that was originally installed as one of the five different heat sources there were in place. It was based around a modified Fiat 127 car engine running on LPG, and from memory was able to provide something like 12kW of power plus a bunch of heat. It did also feed back into the grid too - which is why we have three phase power to the property. Something that my workshop will no doubt take advantage of one day! Obviously the van made sense then when they were doing the power generation on-site.

I reckon there will be an electric car in the drive again in the longer term future, especially once we've got the atrium reglazed in photovoltaic glazing (we reckon it's good for 6-8kWp based on current tech, though that's going up every year) as that would probably totally negate the running costs. That's a ways down the road though - not least because the glazing will cost north of £30K...and that's before installation!

Bit disappointed that I've not even managed to get a response from the BBC though, thought they might be at least somewhat interested in how their "energy conscious home of tomorrow" was holding up 35 years on, and what was being done (and was planned to be done) to bring it firmly into the 21st century. To be honest, I'd like to make contact with them just to congratulate them on doing a bloody good job! The average heating load here is still less than half that of an average home this size being built *today* which for a house from 1981 is pretty good going. Especially as they've achieved that without just making it a hermetically sealed box so you have massive problems with mould and condensation like my last flat in Aberdeen.
Top

Now I do vaguely recall the electric CF project - but even the absence of a grille, didn't prompt that recollection.

Of course a lot of those custom CF's were a different form of hybrid - they were CF(often)P6 crosses: any real custom van had to have a V8 (although most Transits made do with a V6).

Mention of electric cars always made me think of the story that GM bought all the patents for electric cars which, as recently as 20 years ago, were allegedly still at the back of some exec's desk drawer.

Now it recalls a photo. in a museum in Shamrock, Texas, taken in 1912, showing a woman recharging her already 6 year old car - with a hand cranked charger!

Anyway, back to matters of moment, C15's back in London, at last, after a very uneventful 4 hour run up from Devon, having got very cold replacing the remaining tank retaining nuts & the heat shields, once I'd found the fasteners - among all the screws when I put the ply lining back!

So, I must've done something right: just wish I knew where the air leak was - & how I fixed it. Remains to be seen whether, at the same time, I've cured the "running out of fuel while still 1/4-full" fault from earlier last year. Reasonably optimistic, as once I'd got the tank back & connected, it was only running on the spare 5 litres of fresh diesel I had. First of all, I thought the guage wasn't working but it was just I hadn't seen it registering so little for so long. Low fuel light doesn't work though - any ideas?
Top

Good news on the fixing the air leaks

Air leaks can be like that. Ask anyone who's been hunting vacuum leaks on it seems any Bosch monopoint injection systems!

Car runs like a bag of bolts. Check everything. Seems fine. Still runs rubbish. Take a bunch of vacuum hoses you can't see well off to get a better look, seem fine. Reassemble...car then runs perfectly!
Top

Yup, I'm well pleased - so we're off to Maastricht on Friday

BUT it is only one step removed from a self-curing fault - & I HATE those!

Obviously it could've only been a pin prick, otherwise it'd have been a fuel leak, but short of using a magnifying glass I examined those hoses very carefully &,then, only replaced them because I couldn't face the prospect of having to do it all again. Although, without a doubt the worst bit is coming to the job with a full tank (although removing the ply lining runs it a close 2nd!).

The detached filter basket on the floor of the tank was also a bit of a puzzle. Could it really have been so blocked that the force of the returning fuel blew it off?

Anyway the final reassembly was Sunday's job. Saturday's was making some progress with having at least one working horn on the red Cherokee (which has been mute since I bought it the previous Christmas). Seems like it's the clockspring - & I really don't want to go there. So, I've found where I can tap into the earth lead from the relay (not easy by any means) down behind the o/s kickpanel & made a hole where I can fit a "flasher" switch an extended finger's length from the wheel. Just a matter of dropping a lead from the switch down to the relay & another to a suitable earth point, already identified - & only about a foot beneath the switch. Big problem is I can't find my plastic carrier of assorted cable & I've no idea where there's an appropriate shop in Torbay. The weekend before I finally replaced the handbrake AND got it to work - but I'll save that for another time.

Zel, thought I'd found you a pre-facelift Cherokee on eBay - but when I looked at the photos, the LPG tanks (or, rather, their case) takes up virtually all the load space behind the back seat - oh & the colour was wrong.

BUT it is only one step removed from a self-curing fault - & I HATE those!

van ordinaire wrote: ↑
09 Jan 2018, 01:57
The detached filter basket on the floor of the tank was also a bit of a puzzle. Could it really have been so blocked that the force of the returning fuel blew it off?

Maybe one of those things... I noticed the filter basket was detached from the pump assembly on my Saxo... I had to fish around in a near-full tank of petrol with a gloved hand to retrieve it... Mine was not in any way blocked...

How and why it was detached I have no idea... They're not clipped on very securely so maybe a combination of low fuel level and very keen cornering may have caused enough of a fuel slop in the tank to pop it off...
Top
Messages: 494