So.. we connected up the ammeter inline between the battery positive and red lead and put the black probe on the battery lead left off the battery. 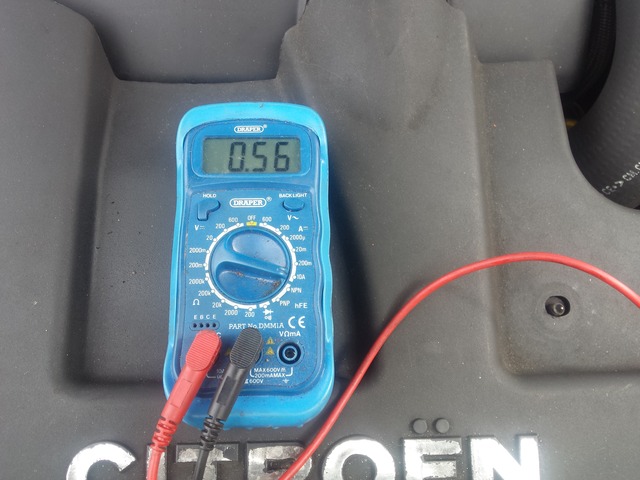 This is my reading.. so i went through the fuse box pulling each fuse.. the radio curcuit dropped the reading to 0.06... however also on the radio fuse is the clock... ambient temp display.. instrument panel .. so.. dash apart i unplugged the radio.. no difference.. then clock and interestingly that dropped the amp to 0.06 .. so out of interest plugged it back in and the amps stayed at 0.06.
So im not sure whats going on there. So ive left it as is.. and see if the battery is flat tomorrow night or something..

We shall see..
Top

I invested in a proper professional tool and with the right size of butts I'm confident of doing a good joint always - something you can't do with the 'el-cheapo' tools... They are in fact so poor as to be dangerous...
Top

Paul, your ammeter is showing 60mA which is perfect

That flattens the battery jim.. ive got it dow to 0.06 when i last locked the car...
Top

Haha this just reminded me, I found a tin of Fry "Fluxite" in a box of bits the other day, looks to be around late '70s vintage and worked a treat adding in a trailer plug on the 206 for a light board when we have a bike carrier on.

That Xantia looks a good buy, bit of tlc and it'll be good for a while yet

Well..im completely useless in finishing these blogs off... anyhow, the battery flattening was found, and to my amazement it turned out to be the clock! YES THE CLOCK!

I swapped it for another and it never went flat again!

The next request after sorting it all out was to install cruise control, as the car was a late model with it already in the ECU.

Items required:
XM type cruise stalk lever
5 Core cable from ECU to the steering colum
Dash On Off switch (if you like)
An XM 2.5 TD Brake pedal for ECU off when brakes applied.

Initially I tried a Brake No connection Relay setup, however, this proved useless, as the ecu didnt like it, I eventually narrowed it down to Switch Timing! The ECU needs to see the Cruise Knock off BEFORE brake lights applied, and as the relay worked off the same switch, it didnt like it. However, an original Cruise brake pedal has the switchs setup so that cruise knocks off then brake likes, it then liked this.

Threading the cable isnt to bad, you can go out the side of the A pillar near the loom to the door, then inside the A pillar, turn forwards, behind the arch liner theres a grommet in the A pillar, pop it out and thread it out...

You can then take it over the top of the arch liner and in by the washer bottle filler and into the ECU box..

Then wire up the lever..

And install the dash button if you wish,

and swap the brake pedal and wire that up...

Job done, wire connections are on here in other areas..

The car all finished returned to its owner, and has now since been sold on ebay by its owner..
Top