You should have been around when all cars had grease nipples on all their working parts Neil, now that was dirty.

Don't forget that EV's still have brake fluid and coolant though - the coolant loop that cools the motor, inverter, charger, and on some EV's like Tesla's the battery pack as well, is more or less standard 50/50 antifreeze coolant pumped around with an electric pump.

They also have a conventional radiator (albeit a rather small one as the waste heat is very small compared to an ICE) for that coolant loop.

I don't know what the typical change schedule is though - probably a lot longer as it isn't subject to contamination from combustion products.

The A/C also has normal A/C gas/oil in it.
Top

I do miss those nipples

Cats, DPFs, regenerations, EGR, BSI's, DMFs, and all that stuff too!
Top

The biggest market place for EV's in the world is China, and surprisingly it saw a bit of a blip in EV Sales for January 2017, 61% down on the same period the previous year. The post on 15th February gives a reasonable assessment.

Politics inevitably is playing its part in either holding back or encouraging the move towards electric vehicles. Probably nowhere more so than in China.

I came across this article in my wanderings around the subject of EV's. Without first-hand knowledge its a case of make your own assessment, but it is indicative that in the field of EV's and battery production, China are definitely "in it to win it".

Why has Hyundai knuckled under? Simple. China now requires that 8% of all new cars from any manufacturer must be “new energy vehicles.” If Hyundai didn’t play ball, none of its cars would be electrified and it would be banned from selling cars in China.

The internet is full of EV news and stories but mainly USA and China, but what's the state of play in our United Kingdom. Time to search out whats happening in the UK first hand..

So what can we read into that breaking news.

Firstly the charging network in the UK has reached Sainsbury's car park on the fringes of the "Northern Powerhouse". It has the capacity currently to charge not just one but 2 vehicles at the same time. UBER rather like the Grey Squirrel has invaded Tyneside, and the odd siting has been made also in rural Northumberland. The nearby Robins and Day Peugeot dealership didn't have a single electric vehicle on offer. Nissan Leafs dominate the I-Spy Electric Vehicles round here, to the point where I could offer 50 Points for an unusual spot for any other 100% EV.

There is an associated story with the actual installers/manufacturers of the charging point at Sainsbury's. They have secured £9m funding to expand their charging infrastructure.


“POD Point is already a well established, leading player in this country’s EV sector, having manufactured and sold over 27,000 charging points since it was founded in 2009. This new investment is intended to fund the next stage of business growth, directly creating 50 new jobs in the UK, and helping to lay down the bedrock EV charging infrastructure to fuel the expansion of the market both here and in Europe. Following recent partnerships with Barratt Homes, Holiday Extra and Hyundai, POD Point intends to have one of its stations installed everywhere people park for an hour or more by 2020.”

I notice Milton Keynes, particular in the central area, is full of charging points now. They are everywhere and many seem to cater for multiple types.. They look like petrol pumps and their charging lead collections look and stow very much like petrol pump hoses..

The sheer variety of different leads and plugs is worrying for the future though... I feel a bit of standardisation is badly needed...
Top

Our local ASDA actually has a couple of public charging points in the car park.

The bad news is that most times I have driven by there appear to be what look suspiciously like Dino fuel powered cars parked in them...

(In EV parlance, any EV driver arriving to try to charge has been "ICED"

I notice Milton Keynes, particular in the central area, is full of charging points now. They are everywhere and many seem to cater for multiple types.. They look like petrol pumps and their charging lead collections look and stow very much like petrol pump hoses..

Yes the "rapid" chargers do look like petrol pumps. Rapid chargers (or Level 3 chargers) are 50kW DC and above, typically charging most cars from nothing to about 80% in 15-30 minutes. They always have a tethered cable attached to the charger/pump. There are currently two standards (ignoring Tesla's proprietary system that only works with Teslas!) Chademo and CCS. Chademo was originally a Japanese standard but is also used extensively in the US and UK. CCS is a European standard used on most EU EV's (BMW's etc) but ironically there are far more Chademo connectors in the UK than CCS...

The sheer variety of different leads and plugs is worrying for the future though... I feel a bit of standardisation is badly needed...

Yeah, it is a bit confusing.

In the UK you'll find 3 pin 13 amp BT plugs for Level 1 charging (not very common at public chargers, and very slow) Level 2 charging in the UK/EU is universally using the Type 2 Mennekes connector - on these you'll usually find a socket on the charge point with no cable - you have to carry your own cable in the boot. If your car is of European origin it will usually have a type 2 socket on the car as well. So you use a Type 2 to Type 2 cable. This same cable can charge at home if you have an EV charging point installed. Occasionally a type 2 charger is tethered.

Some cars of Japanese origin (Leaf, i Miev, C-Zero, Ion) actually have a Type 1 connector - this is a connector that is only used in Japan and the USA - you won't find it over here. So you need a Type 1 to Type 2 cable! The signalling is the same though so its a bit like an HDMI to DVI cable.

It's a shame that we have to go through VHS vs BetaMax and Bluray vs HD DVD again in the EV charging space!

I think it will sort itself out though, part of the problem is different standards in different countries, which then causes issues when a car made in one market (Japan) is sold into the EU for example...
Top

Here's a short paper on the Solid state batteries that are being researched at the moment:


A convenient long-term energy store of electrical
energy as chemical energy that is delivered back as electrical energy
is the rechargeable battery; the efficiency of the energy conversions
in a battery is not constrained by thermodynamics other than by the
heat loss associated with the internal battery resistance.

This is a salient point regarding batteries - with any kind of machine that burns chemical fuel to produce energy such as an internal combustion engine, there are pretty hard limits to the maximum possible efficiency of the process due to thermodynamic limits. This is actually the major factor that limits the efficiency of an internal combustion engine converting petrol/diesel into useful work to around 20-30%.

There is no such thermodynamic efficiency limit in a battery, energy loss through resistance is the main cause of less than perfect efficiency. Likewise an electric motor's efficiency is limited largely by the effects of resistance of the windings, as well as things like eddy currents in the rotor. These can both be minimised to very small quantities. There is also a small amount of energy loss in the bearings that support the rotor. But there is no thermodynamic limit on maximum efficiency for an electric motor, which is why they can routinely exceed 90% efficiency.

ICE engines are doomed to not get significantly more efficient than they are now simply due to the limits of the laws of thermodynamics. Modern technology has already squeezed out nearly every drop of efficiency that can be wrung out of a portable internal combustion engine.
Top

The science behind the transition to electric transportation all points in one direction. Time to get on with it

..and in Milton Keynes another piece of the jigsaw.....education


TRO has been appointed to launch the UK’s first ever Electric Vehicle Experience Centre in partnership with Chargemaster.

...The ground-breaking EV Experience Centre is to be delivered as part of Milton Keynes’ £9m ‘Go Ultra Low’ Cities programme, which encourages the uptake of low emission vehicles – with a target of 23% of all car sales being electric or plug-in by 2021.

NewcastleFalcon wrote: Anyone know a roving reporter in the Milton Keynes area who could have a mooch around when it opens (Spring 2017 sometime)

I might if it happens on a Monday or a Friday... I can go there on my bike...
Top

I am sure no one will mind if I put up this public domain image from the Go Ultra Low Cities initiative. 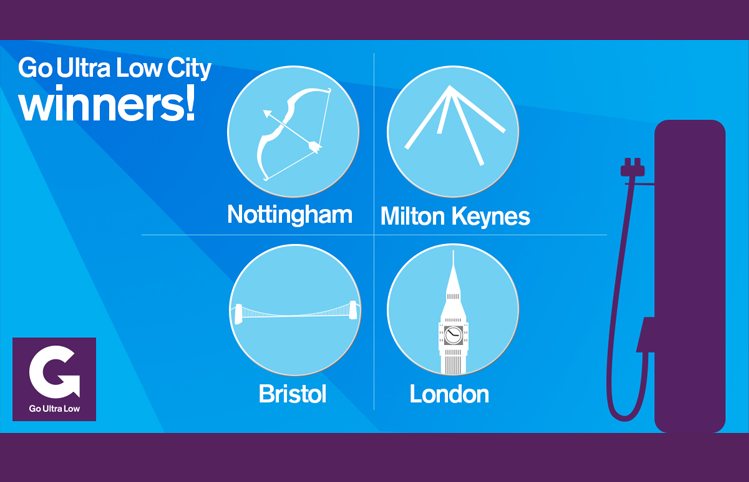 So whats going on in Bristol, Nottingham, and London?

....and more generally if forum members could post up whats going on in their own cities/counties/regions it would be interesting. I know there are a number of them who are trying to take the bull by the horns to make a real difference which only helps to move the process forward.

Ironic that the icon used for Mk is obviously (to locals) a stylised version of The Point, a building that has been a commercial flop, and is now slated for demolition...
Top

I thought it was an incomplete pyramid!
Top
Messages: 1550