A few months yet before they start appearing on the spotting thread....just taking orders from start of May in the UK. Wonder if the expected price (£33,000 ish depending on spec) already takes into account the UK plug in grant (35% of the purchase price up to a maximum of £3,500).

If you are undecided about colours this may help

Grating voice/accent. A minute and a half and it had to go

Must admit I didn't get past "black" either for the same reason!

To get over the limited range of colours, if you get a black one and wrap it in cling film, hey presto it turns into this.

"Electric Classic Cars" seem to get some nice vehicles to convert, but no doubt clients with deep pockets.

bobins wrote: ↑
15 Dec 2016, 22:31
Only yesterday Amazon released the video of their first Amazon Prime Air drone delivery - and yes, it may have only been a proof of concept / press release, but just how far do we need to look into the future before we see our regular deliveries being delivered by (for want of a better term) 'robots' ?
<Much Snippage>
Unlikely ? ....Possibly.
Impossible ? .........Nope.
Progress rolls on...........

....And on the BBC website tonight:
Amazon to deliver by drone 'with months'
https://www.bbc.co.uk/news/technology-48536319
"It unveiled its latest iteration at a conference in Las Vegas, touting the machine's ability to spot obstacles such as people, dogs, and clotheslines.
Amazon executive Jeff Wilke said the drone would be able to travel 15 miles to carry packages weighing 5lbs (2.3kg) or less."

I can't decide if, overall, that's a good thing or a bad thing though

It means the delivery can be dropped from a greater height than the courier man can usually manage when he chucks your parcel over the fence.

Nice presentation by Elon Musk - I love how unpolished he is at public speaking, almost inept.

I enjoy listening to what Elon has to say (especially on rocketry) however he's a terrible stutterer and you can see his mind darts quickly from one thing to another so he rarely finishes a sentence before darting on to something else. The weird thing is if you watch presentations/interviews with him from about 5 years ago or more he's a lot clearer in his speaking and doesn't stutter and jump around nearly as much. I wonder what happened...
Top

Does this belong here or French Cars In Films?

I have to admit I never go wow wow wow when all of the autonomous and infotainment features are demonstrated. While the two front seat occupants merrily watch a separate movie each while the steering wheel and pedals have disappeared, she also pointed out another amazing feature.....


Even better than that if you want a full movie experience....this is a 49 inch screen.....and what it displays is a movie......or..if you are driving....it has a camera out the front so you can have a more interactive driving experience you can see what is happening out the front..on this screen.

I think that has already been invented....the clear windscreen and a pair of eyes!

Granted, I am not the target audience for this sort of stuff.

Watching the windscreen view on a screen seems largely redundant but did you notice it is also the satnav?
Rev counter seems rather unnecessary too.
The range seems to rival Tesla's too.
Top

I very much like the 504 Coupe to which the Design of the E-Legend Concept pays homage. One even appeared at the Blacksmiths at Belsay last May photographed by yours truly. 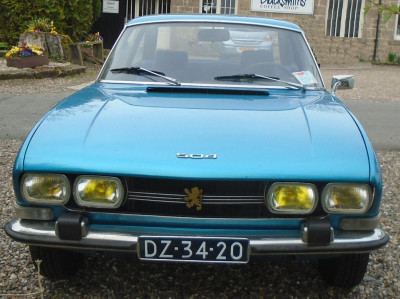 "The Peugeot e-Legend Concept, an electric sports car with advanced autonomous features styled on the 504 coupé, has gone on display at the Paris motor show – and the firm's boss has said he would "love" for it to go into production."