I always find EV's drag racing amusing, here is a kit car that someone has managed to fit a 470kW Tesla Model S rear motor in, that can do quarter mile in 9.86 seconds:


Pretty impressive, until you see this VW

I've watched a lot of drag racing videos and I don't think I've ever seen anything that wasn't a full length hotrod dragster launch that quickly.

The initial launch is unbelievably vicious. I think the car in the other lane just gave up through sheer humiliation!!

Funny, I couldn't see the one thousand trained mules that all kicked that Beetle simultaneously from behind!

Here's an interesting application for a battery electric vehicle:

A massive mining dump truck has been converted to an EV and in the intended use case of carrying a full load downhill from the top of the mining area and driving back up empty it's expected to generate more energy from regenerative braking down the hill than it uses to go back up the hill!

So once it's charged the first time, it will be able to operate indefinitely without ever needing to be plugged in to charge.... although it's looking like they might actually plug it in to siphon off excess power to the grid!

came across these 2 pics in a RetroRides thread from an'oldtimer' meet somewhere near Cologne.... 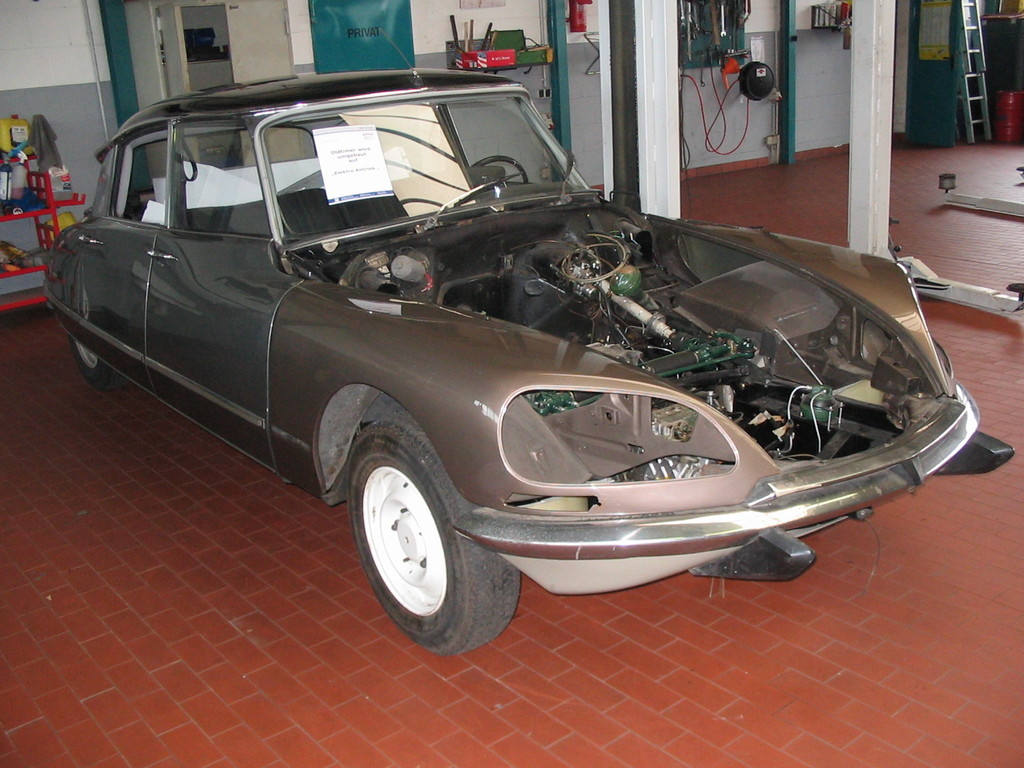 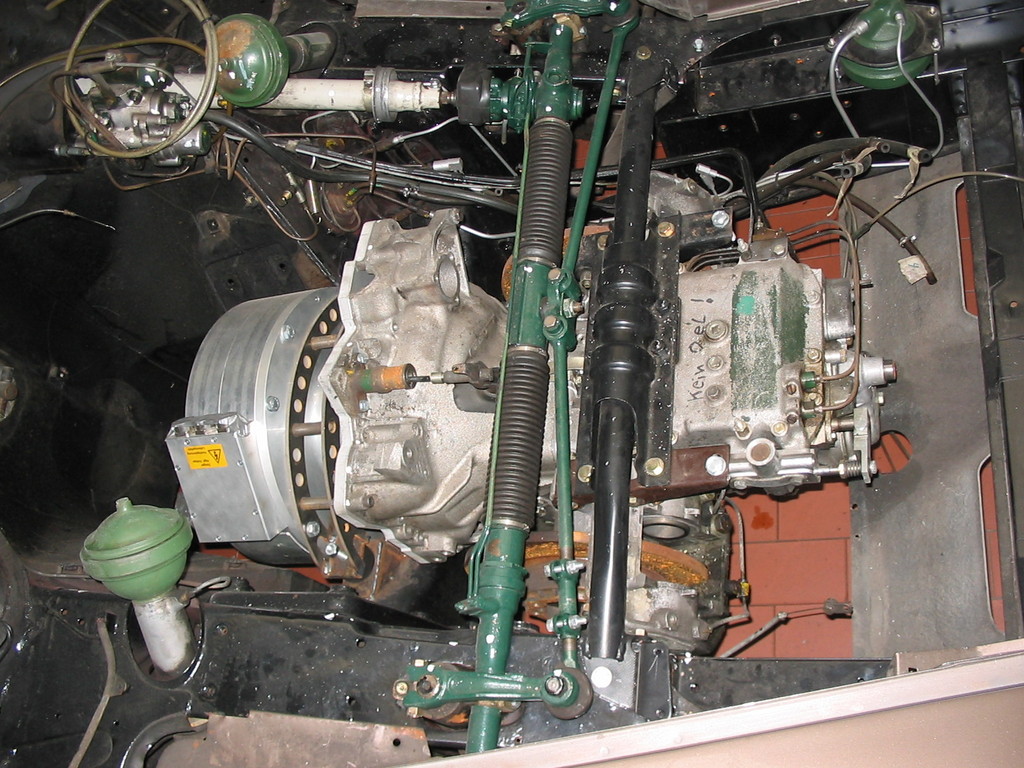 apparently in the workshop being converted, i've found no more info other than the above
Last edited by myglaren on 19 Sep 2017, 21:41, edited 1 time in total.
Reason: Image tags
Top

The end of Coal generation in the UK ?


When Drax opened for business in 1974, Britain got 80 percent of its electricity from burning coal. As recently as five years ago, the figure was 40 percent. But last year, it was 9 percent, and this summer coal supplied less than 2 percent of Britain’s electricity. On April 21, 2017, for the first time since its inception, the British power grid went 24 hours without coal.

The zing in the power lines now comes almost entirely from natural gas, nuclear, and growing networks of giant wind turbines and solar farms. The government says all of the U.K.’s remaining coal plants will be shut by 2025 – maybe sooner. Drax will live on, but only by burning biomass – mostly wood chips imported from the southern United States.

Eight giants of the coal age, including Drax, still stand ready to deliver power. But, as carbon taxes rise and the cost of renewables falls, these plants are slipping down the pecking order of grid suppliers. Coal only provides occasional back-up energy now, mostly on sunless and wind-free winter days, when demand is high and the supply from renewables low.

I don't think that fact is very well-known in the UK sadly...
Top

...marks the surge of wood-burning.
Top

Drax will live on, but only by burning biomass – mostly wood chips imported from the southern United States.

Biomass on the last part of its journey from Liverpool to Selby (and Drax) thundering through the little town of Hebden Bridge in Yorkshire, and from presonal experience "thundering" is a good adjective.

Its a very competitive world and the Port of Liverpool has certainly put some serious investment into a £100 million Biomass handling Facility, and the links with DRAX B are an important part of this.

From the US and Canada point of view, they see demand from Europe expanding for wood pellets, which are a by product of their huge sawmilling operations. While supply of the raw feedstock into the process isn't a problem, getting it from the forest to the processing mills and the ports is. 21st Century Industrialists, and Entrepreneurs having to answer the same questions as their 19th Century equivalents, and coming up with railways and canals

Transportation and loading can be as much as 40 percent of the total delivered pellet cost, according to Brent Mahana of Cooper/Consolidated, the largest independent barge operator in the U.S. Of that cost, roughly 30 percent is fuel. Shipping by barge is by far the cheapest method, followed by rail. But much of the North American supply is too far from an inland waterway or rail loading yard to make it economical. With diesel at $4 a gallon, just 50 miles' worth of trucking costs to get feedstock to mills and finished pellets to oceanic ports can make or break an entire supply chain.

NewcastleFalcon wrote: ↑
20 Sep 2017, 18:10
Transportation and loading can be as much as 40 percent of the total delivered pellet cost, according to Brent Mahana of Cooper/Consolidated, the largest independent barge operator in the U.S. Of that cost, roughly 30 percent is fuel. Shipping by barge is by far the cheapest method, followed by rail. But much of the North American supply is too far from an inland waterway or rail loading yard to make it economical. With diesel at $4 a gallon, just 50 miles' worth of trucking costs to get feedstock to mills and finished pellets to oceanic ports can make or break an entire supply chain.

I have an idea - instead of using Diesel powered trucks they should be using more efficient Battery Electric trucks to ship the wood pellets to the port more economically so they can send them to the UK to burn to generate electricity to run Battery Electric Vehicles!

Seriously though, this highlights the absurdity of the current energy systems that the world relies on - so much energy (and money) is wasted shipping physical fuel from one place to another. The whole concept of shipping wood chips all the way from the US by Diesel truck and then by Diesel (?) cargo ships, then probably by more Diesel trucks in the UK just so we can burn them for electricity just beggars belief.

The only reason this is being done is to keep the lights on at Drax - a generation station that has outlived its use by date, but which the government no doubt doesn't want to dismantle as that throws away all the money spent to build it only 40 years ago.

Wood counts as a "renewable" resource I suppose, and technically it's carbon neutral as far as burning it goes because unlike coal the trees that grow to replace the burnt wood chips absorb the carbon given off by burning the stuff, but do we really still want to be burning stuff for energy in the 21st Century when we have Solar and Wind - both of which don't burn anything, don't produce any direct carbon emissions ?

Not to mention the supply chain to get the wood chips TO Drax is anything but carbon neutral and is probably Diesel all the way... It's a strange old world we live in but at least things seem to be slowly heading in the right direction.

The funny thing is that it's not government regulation or subsidies that are pushing us towards Solar and Wind (the Nuclear industry has subsidies almost double that of wind generation for example, a little discussed fact!) but the fact that Solar and Wind are both on the tipping point (and in many countries have passed the tipping point) of out competing other forms of power including nuclear on their own merits - it's now cheaper and faster per MW to build out offshore wind than it is to build a new Hinckley Nuclear plant - and not by a little, by a lot, and the costs are still plummeting. You also don't have the massive decommissioning costs of nuclear that someone 30-40 years from now will have to pay for when the plant reaches the end of its life.

It's also modular - while a nuclear plant can't produce any power until it is completely built, arrays of solar panels or wind turbines can be brought online in a staged roll out and be generating power before the project is completed. As each solar array or turbine is commissioned it can be hooked up to the grid.

The missing piece of the puzzle is bulk energy storage on the grid so that fluctuating sources of power like wind and solar can provide the "base load" for the grid. At the moment that's not possible because there is very little storage on the grid (just a couple of pumped hydro stations in Wales I believe) so nuclear and gas have to provide the base load to stabilise the grid with wind and solar adding as much as they can at any given time. But theoretically if you have enough distributed storage on the grid, whether hydro, battery (lithium or flow batteries) or mechanical systems like flywheels, eventually the majority of the load could be handled by renewables. At the rate of progress in the last few years I can see it happening within my lifetime too...
Top

Drax is also very politically sensitive; it's all about employment and keeping lots of jobs in the area... The same with all obsolescent fossil-fuelled stations I expect.

Same with Hinckley Point C - keeps a lot in work in an area that's short of jobs...

I'm sure it'll happen very quickly. After the way wind farms and solar farms grew up so very rapidly I'm sure viable mass-storage systems will emerge just as rapidly.

The technology exists in small-scale. We have here where I work a flywheel-based building UPS. It's very unreliable but the principle is sound enough...

Also, there's been lots of progress in HVDC transmission which should open the doors for battery storage on a large scale.

The downside is that radio amateurs are already complaining about the level of RF interference HVDC converter stations generate...

I think Drax is probably more important than you think chaps, it's the fall back if some of the other stuff goes tits up for any unforeseen reason.
Top

Gibbo2286 wrote: ↑
21 Sep 2017, 10:41
I think Drax is probably more important than you think chaps, it's the fall back if some of the other stuff goes tits up for any unforeseen reason.

Good point Gibbo... Just image the consequences of a long string of dull and windless days... Although it's fair to say the latter is not so likely!

HVDC converter stations and energy storage systems are a likely point of unreliability though, especially as they're not proven technology just yet - Stations like Drax and the like are very proven, as are the AGR nuclear reactors such as Hinckley Point B.

Given that, it makes you wonder why the UK did not build another well proven AGR for Hinckley Point C and the other planned new nuclear stations rather than go so far into the unknown with new and unproven designs costing a fortune?
Top

Hey Simon, on a side-note, I've just realised I've managed to read and fully digest one of your long posts

My mental energy must be good today!!!

All very good points but storing energy in batteries is just as deadly to life.
The extraction and refining of lithium is a serious problem.
Just look at how it's done.

This is the nicer of the 2 common methods.
The extraction itself uses a vast amount of energy.
So much so that it is totally unviable. Hence the huge, highly toxic, man made lakes full of lithium brine evaporating in the sunlight.

Once it is evaporated enough it is refined by industrial process, using ridiculous amounts of energy from fossil fuel or nuclear.

The harm done is incredible, life is totally wiped out and much pollution is created.

Until we have more planet friendly battery technology we're just moving the problem from our towns and cities to mother nature.

I find this unacceptable, if humans want power but power kills it should be humans who suffer not the rest of the planet.
Top

I favour pumped hydro storage and flywheels as the perhaps most viable and environmentally best ways of storage.
Top
Messages: 1539