Indeed it does Chris

I give myself one every day and I truly believe all the exercise I do most days, running, swimming and cycling amounting to a mini-triathlon, make one heck of a difference to my health and well-being...

Today has been a rest-day. I've only run a 5Km Parkrun

Still might go out for a bike ride before the end of the day though, just to sharpen my appetite for dinner - veggie moussaka... I don't eat meat, just a little oily fish every now and again...

Never in my life have I ever felt so well as I generally do - ME allowing - since I began that regime coupled with wholesome home-cooked food and very low stress...

Talking of electric vehicles I've always fancied an electric bike. When I was at work the company enrolled to the ride to work scheme. You were allowed £1000 to buy the bike of your choice including electric. The cheap ones looked like toys but there was a nice one themed on a mountain bike that was£1300. I offered to pay the £300 as a deposit and get the rest under the scheme but because of some tax implications it was not allowed, however my boss had a couple of beautiful bikes on successive years.

Not cheap but a brilliant best of both

Basically it's a motorised version of my Defy with a Yamaha motor...
Top

Well its different. The range is good, equivalent to modern sports bikes.

white exec wrote: I've had a minor ambition to own and run an electric car for decades now......

Well Chris, not exactly an electric car, but very much a replica of one of the most iconic vehicles ever to take to the roads. Has to be ordered though, but the big advantage for you is that the factory must be "just down the road" so you could pop in from time to time to check on progress. 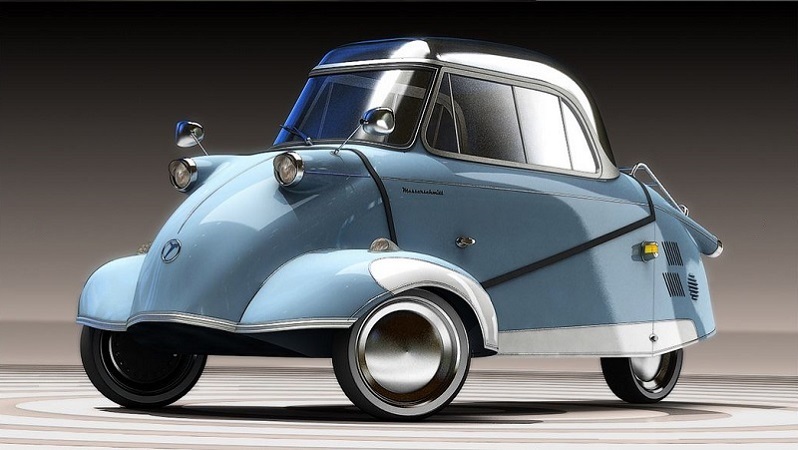 Yes and there will be no plume of blue smoke exiting a two-stroke engine....It is a pedelec albeit a very expensive pedelec. Still it has, in my eyes anyway, a very high "coolness" factor.

The Malaga connection I spotted on the price list..

I'm not quite that athletic Jim but I did manage to get out of bed this morning.

I had an electric truck some years ago Jim, I bought the basis of it for not a lot of money from one of my ex rental TV suppliers, it was the type they used on railway platforms, two wheels at the front and two very close together at the rear, no diff. It had a handle at the front and you walked along with it.

I set about about modifying it for sit on and drive use. I welded an extension on the front so you could sit on the front with your feet in the well. I fitted an Austin A40 steering column and wheel which sat vertically, wheel flat, fitted a brake pedal and an accelerator, cant remember what they were from.

I made a speed control system by paralleling the two 12v batteries on start then in series with a resistor in circuit and full throttle direct 24 volts, all the switching done by 12v starter solenoids, the remote start type.

It worked very well, my son used to drive it through the forest and occasionally got stuck in the mud but that's really where he learnt to drive, it would tow a car without to much difficulty and I used it for transporting mixed concrete when I was laying the top drive and that was up quite a steep hill, I had fitted drop sides it by then. We had a commercial scrap yard not far away out in the country and I used to scrounge the big 6v lorry batteries off him when he broke one - usually in return for repairing his TV.

I had forgotten all about this until you mentioned it, my son would still have been at school he is 47 now, no wonder I forgot. I don't think I have any photo's of it but I will ask martin in case he has.

While looking for an an image of the type of electric cart Peter mentioned and putting the phrase "1960's platform electrically powered goods carts" into google half way down the page this appeared.... 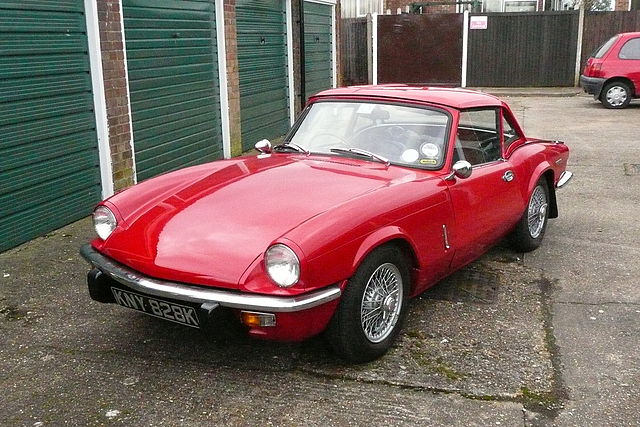 I like a nice Spitfire anyway, but the image sprang from an article entitled "Top 5 Electric Vehicle Conversions".

Now that captured my interest.

Along the way I also found this article with a little bit of detail in it of this... 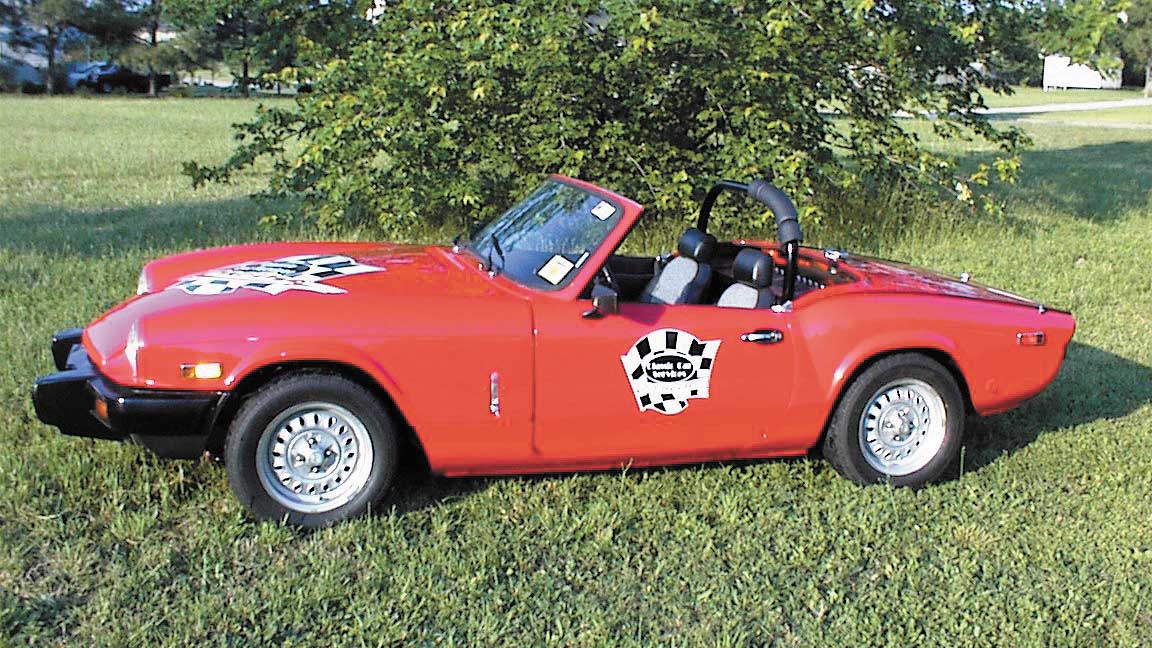 and.....It was converted as a High School project


Built by North Johnston High School students in Kenly, NC this car was designed for participation in the Carolina Electric Vehicle Challenge. This car proves that electric cars don't have to be slow, difficult to drive or ugly! Competing against high schools from across the southeast US, the Spitfire was recognized at the competition as being the best designed and constructed vehicle there, and on the autocross track clearly dominated the competition!

I would suggest a Renault Floride/Caravelle as per my avatar, plenty of free space in the engine bay and the architecture may even allow a bit of cribbing from North Johnston High School save re-inventing the wheel. Not having a garage I would have to volunteer for the role of "Test Driver (Northumberland) June-July-August"

Wow! indeed. Doesn't look like your run of the mill electric vehicle of the time. Presumably it used lead acid batteries although they don't sound very heavy for the capacity needed, although it probably wasn't designed for long journeys.

I see it uses a gearbox, an overdrive one at that, probably not really needed with an electric motor but gives you more options. I should see if its still about Jim.

The space in that Renault Floride/Caravelle engine bay is a dream... After years of working on Xantias with the larger engines such a bay is almost unbelievable!!!

If not the Renault Floride/Caravelle, I reckon an electric H Van would be a great project... Loads of room for the batteries...
Top

Gosh, Neil. How did you know?

Always thought it was a pity that early offerings of "city" electric cars were so damned ugly and naff to look at. Presumably done deliberately, so that no-one would want one. Finally, Renault offered the Zoe and Clio EVs, and others followed. No reason now to have to take the Noddy-car option.

Old lead-acid conversions were always fun. I remember back in about 1963 a neighbour of ours built his own: old Austin Seven chassis, with a single motor directly driving the rear diff. Back seat and boot full of lead-acid batteries, and largely plywood 'coachwork' to keep the weight down. Called Baby Zeta and painted Post Office red, it would click and hum its way between his home in West Ealing to his office in Kensington iirc every day for years. Biggest problem was not getting run over by it, as it was virtually silent. Lovely.
Top

Also remember the conversation I had with the milk-float repair yard in Alfold, back in the '70s. Guy said that most of the Express Dairy and other floats they worked on were 72v dc motors, but batteried-up with only 24v, or sometimes 36. That way, the motors would last more-or-less for ever. Motor speed control was pretty basic: a set of iron resistances to vary the field current, and located under the driver's seat, it made some attempt at winter warmth.

Although 600v d.c., many London Trolleybuses were so well built that their traction motors lasted the life of the vehicle, in some cases more than thirty years. When the system was finally (and tragically) scrapped, word was that the scrap value of the high quality overhead cable actually paid for the entire cost of dismantling. In the last months of operation, the newest vehicles (Q-type, built in 1950), and seating 70-72 passengers, were sold off to Spain and South Africa. In Spain, they ran in several cities until the late '80s, when the Spanish government issued an extrordinary decree compelling local authorities to discontinue electric street public transport. Only a few years ago, one (?two) of these Q1's were rescued, and shipped back to the UK to the Trolleybus Museum in Sandtoft, Doncaster.
Top
Messages: 118