I may be dreaming but after yesterday's fluid swap I think it felt very slightly easier this morning. More "twirlable!" I think (I hope) the reason the fluid is still black is because the new fluid is slowly cleaning the crap out of the system. The original fluid was watery, its now oily. So a definite change.

Well, it took a while but I now have my feather light clutch. What a difference, I'm not hanging on in gears because it's such a chore to change, I just change! Lovely. Also I'm positive the steering is lighter today. I'm just going to have a well earned cuppa then do another fluid change before it gets too dark and cold.
Happier.

Thanks Jim, I did enjoy it.

The fluid that I just took out definitely had a red tinge so it is improving. I topped it back up with fresh, so that's four changes. I'll leave it now for a week and then check it again.
I forgot to say Jim, yes the alignment is a tad out as it pulls just a bit to the left. I'll get it tracked soon.

I reckon getting the tracking perfect will just about fully sort the steering Dave...
Top

Mmm slightly worrying the gear change was getting awkward again this afternoon. I'll get in booked in for the cables this week, I don't want to risk another tow in.

I need to get fit. I've been retired 15 months and although I go for frequent walks I want to do more. I used to do a lot of mountaineering and rock climbing and I did manage to get out a couple of times last year but the wife has started to worry about things. I go to the shop and she tells me to take my phone, so I've been looking out for an exercise bike, the electro magnetic type though not the wind up strap type. I saw one on ebay earlier in the week, a York C201, I put a bid in and won it so yesterday we had a run down to Worcester to collect it. The further south we got on the M5 the thicker the fog became and we were in a 50mph roadwork zone. Ideal pile up situation thought I, it was quite busy as well. Then just before Worcester everything came to a standstill and I was wondering if anything had happened, then as quick as we stopped we started again but slowly stop start, I think it was just the amount of traffic round Worcester slowing everything. Anyway we got off at Worcester north to a bit of blue sky and sun! Why the fog hangs around the motorway I don't know. We found the house a couple of miles off the motorway and it was a nice old couple who'd bought it with good intentions and it had ended up in the garage. The chap powered it up for me and it all worked and we put it in the back of the Synergie and set off back home. The fog wasn't as bad on the way back and we held a steady 60-70mph, I must say when she gets on the turbo there's a bit of oomph there.

No 1 son popped round and we struggled up the stairs and got it in the spare bedroom. I had a quick cuppa and plugged it in and, nothing!

Then it started beeping at me and doing a constant reset. Looking on t'internet a lot of people said when they had been moved they weren't happy and even new ones had been doa. Not to be beaten I took the lcd panel off and checked the pcb and connections, I also noticed the handlebars were fitted backwards! I couldn't see anything obvious so put it back together with the handlebars the right way round to find it had stopped beeping and I could select all the various programs and settings. Dodgy connections thought I and jumped on to try it. It started ok but when it came to step the resistance up it reset and beeped again, I tried various programs with the same result. Back on t'internet to see many people had complained the magnet was duff, soo off came the pedals and side panels and I found quite a neat setup. The pedals drive a crank mounted pulley with a ribbed belt which transfers the drive to a steel flywheel, next to the flywheel is what looks like a brake shoe hinged at the bottom and connected at the top by a short bowden cable, the other end of which is connected to a tiny pulley on a stepper motor. I didn't realise at first but the "brake shoe" is in fact a permanent magnet and the stepper motor turns slightly, releasing the bowden cable so the magnet gets closer to the flywheel and induces mechanical resistance. It doesn't actually touch the flywheel it just moves closer or further away depending on the program settings. Clever, apart from the fact it wasn't working, so I pulled another two or three connectors apart and reconnected them again, I also noticed a small sensor that took a signal from what I assume is a magnet mounted on the crank pulley, but I thought the air gap looked a bit too great so just eased the sensor in about 2mm, then selected a program, popped the left hand pedal on temporarily and just pedalled slowly by hand and watched. Success!

When the resistance was to be stepped up the stepper motor activated and moved the magnet nearer the flywheel. I taped all the cables back to the frame and screwed the side covers back on and replaced the pedals and I only had one self tapper left over. Not a clue where it came from but everything is now up and running, the only thing not to work is the pulse monitor from the handlebar pads but for 26 quid I can't grumble, I'll see if I can get an hrm from ebay or Amazon. I think maybe standing in a cold damp garage then being given a good shaking over some of the Midlands finest potholes was too much for it and a little bit of tlc brought it back to life.

I had a heck of a drive in the patchy fog on Friday Dave... It was bloody hard work and such a relief when it broke into beautiful clarity every now and again!

If you want any tips on getting fit, just ask me

Try a combination of running, swimming and cycling and you'll do it!

I once had one of those clever cross-trainers with the stepped resistance and so on. Mine broke and I found the problem was with the motor that drove the brake... It was short-circuit and caused the same issue you had - a constant reset... I never did fix it. I binned it in the end...

These days I have a static bike with manually set variable resistance but I rarely use it; only when it's too inclement to run or cycle in the great outdoors...

I also have a turbo-trainer I can mount my bike on and furiously pedal to nowhere and back! Again, rarely used...

I did loose two days of running last week - far too icy on the pavements...
Top

I wonder if it would be possible to fit an alternator to the turbo trainer? That way you could recharge batteries while keeping fit. I don't mean the big car batteries, but more the AA, AAA, C batteries and so on.
Top

Hell Razor5543 wrote:I wonder if it would be possible to fit an alternator to the turbo trainer? That way you could recharge batteries while keeping fit. I don't mean the big car batteries, but more the AA, AAA, C batteries and so on.

I won't be as mine are hardly used; I much prefer to be out in the great outdoors...
Top

Just make sure that you get the wiring right. I do not want to read of a Buckinghamshire man who was injured when his exercise equipment spat him into a wall at high speed.
Top

Or a house fire caused by an exploding car battery!

That's the more likely with me

It would need a good regulator

Just run two parkruns this morning (out of a total of three for the weekend) and all times were very good and either PBs or close...

Dave, that's what you need to do... Parkruns... Good for fitness and very social...

I'm sure there'll be one local to you

Was never much of a runner Jim but used to cycle miles when I was younger. I can also walk for hours, but just can't run for any extended time. I will just collapse in a quivering sweaty heap so because I can walk for ever and hardly work a sweat up I thought exercise bike! I did a couple of k yesterday with varying resistance and am hoping to build this up to about 10k a day over this month. I have to be serious about this for the sake of my health so am going up for another few k when I finish my tea.

Excellent Dave, a slow build-up will see you good for 10K and beyond in no time at all

I used to be like you in that I could walk for ever but not run but with practice I can now run for ever too...

I'm a bit like a Duracell Bunny... Set me off and I just go on and on and on

This is my exercise bike: 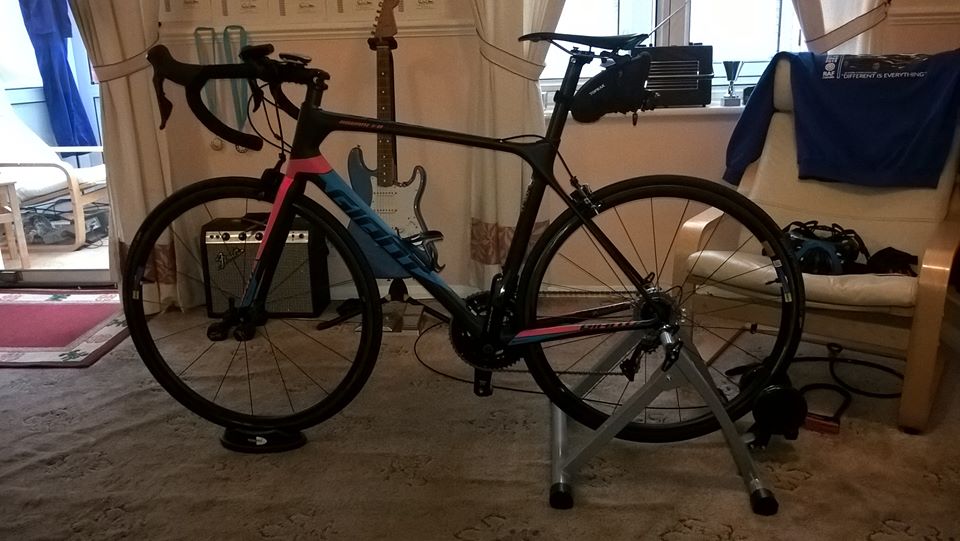 The big trouble is it's a long, boring ride to nowhere and back...

Works up a good sweat though

10 miles on the turbo is equivalent to 20 out on the road as you're always riding against a resistance and effectively hill-climbing... Same with your exercise bike...
Top
Messages: 202