BW photo, taken from one of the new tall buildings on the north side - maybe the Martini building.
On the left is North Thames Gas, and the old Agfa-Gevaert buildings. The Coles Priestman (cranes/construction) building is now gone, to be replaced with a 1982 six-storey HQ for Agfa UK. 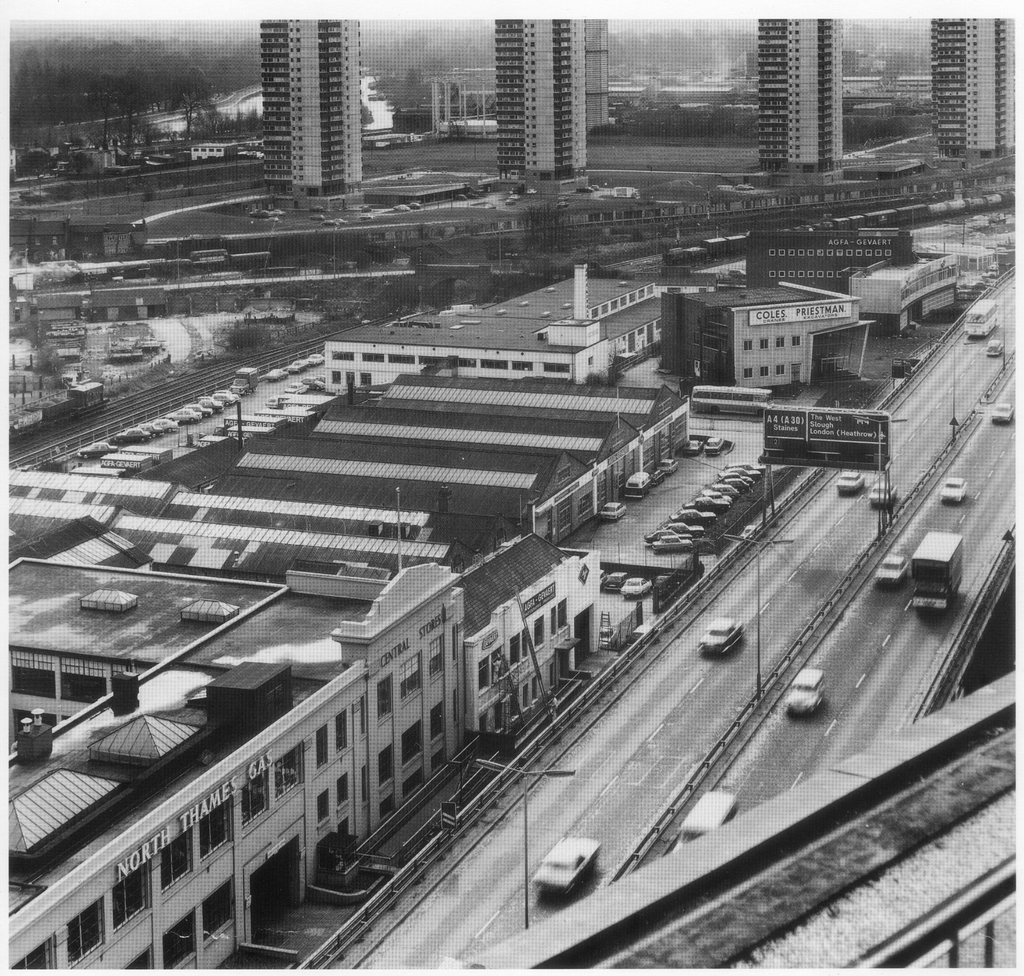 In the background, Kew Bridge Station, Brentford FC, the old gasworks, and the River Thames.

There could be prizes (well, points anyway) for being able to date the photo, maybe from the somewhat sparse traffic on the motorway.

When originally constructed (and Macleans (toothpaste) sued for £1M for 'loss of daylight' when the flyover passed over their rooftop in Boston Manor Road, heading westwards), the elevated structure was equipped with electrical under-road heating. A series of small substations hugged the supporting pillars. Rising energy prices saw off continued use of the system, and the highways authorities resorted to the usual salt-sand mix for de-icing. Unfortunately, both tarmac and concrete were porous, and no membrane, and the salt leached through to the supporting concrete, corroding and swelling the steel reinforcing. In many places, the steel bars actually broke through the concrete surface.

The proposal was to drill the concrete, about every 20cm, across its entire surface, and to inject stabilising solutions. Squads of men were employed to paint small black marks on the concrete, to tell the drillers where to place their bits. So far as I know, the drilling was never done (and I'm talking 25 years ago now), but the black blobs remain! At the last count, total demolition of the elevated section was being discussed.
Top

The Brentford Towers Estate, if that's what we can see consisted of six towers built between 1968 and 1972.

Now the avid Dr Who fan may well recognise Harvey House, one of the towers, from "Day of the Daleks"

This was filmed in September 1971, and the said tower block may well have been the Daleks HQ!

What a fantastic picture

OK, Neil. I've just gone back to my original half-tone print of the photo, and put a decent linen glass on it.

By 1982, Agfa had demolished the Coles-Priestman building, and everything between it and the railway, and built a new purpose-designed UK HQ:

I was based there from 1989 to 2003, and so got to know the area rather well, having grown up and gone to school in nearby Ealing.
Top

white exec wrote:OK, Neil. I've just gone back to my original half-tone print of the photo, and put a decent linen glass on it.


Just to the right of the Agfa-Gevaert building being painted (I can't read the guys' watches):


Have you noticed the chap painting the first floor window is standing on the window ledge, leaning back, holding on with one hand whilst painting with the other

Have you noticed the chap painting the first floor window is standing on the window ledge, leaning back, holding on with one hand whilst painting with the other

Been there, done that, many a time.

So, how much do I know about Brentford.....not much but a canny bit more than I knew yesterday.

Of course the names of the tower blocks are not just pulled out of thin air but....


1972 The first occupants moved into the blocks of flats built on the redundant filter beds of the water works. The blocks were named to commemorate the connection. Cornish beam engines had been used at the waterworks. Boulton was a partner of James Watt and developed the use of steam engines for pumping, Harvey and Co of Hayle in Cornwall built engines for the Kew works. Maudsley was a mechanical engineer who supplied the first engine to work at Kew. Wicksteed was a consulting engineer who realised the efficiency of the Cornish engines and Fraser was the designer of the tower built to protect the system of stand pipes from frost.

..and the London Museum of Water and Steam is there to tell the story.

Back to the task in hand....there is a handful of cars near most of the blocks shown (many less than if you look now on google maps satellite view) so I would say the photo had to be taken 1972 or later.

....and an aside but a reminder of different times...who can forget "Brentford Nylons" (yes probably everybody

) and there's an E-type Jag in the image to boot! 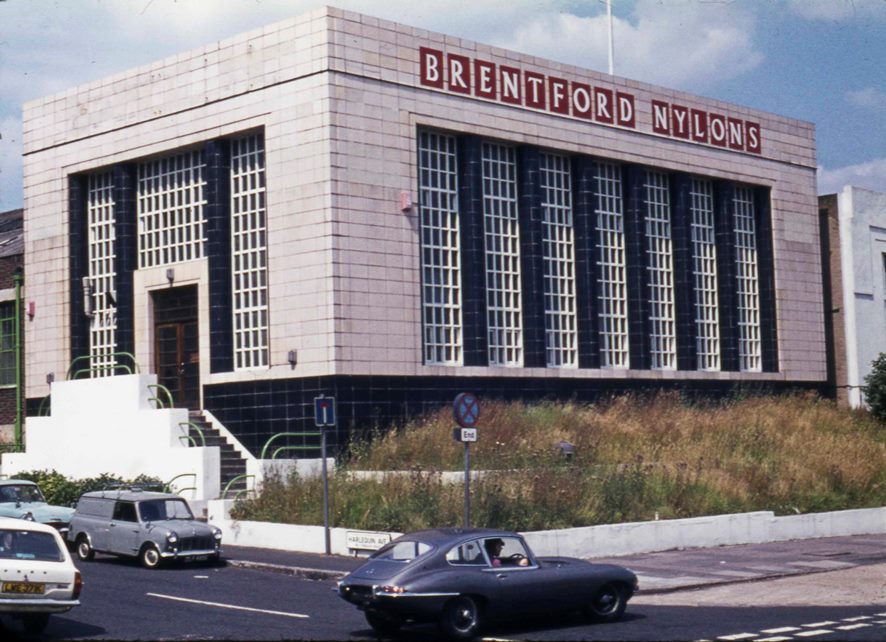 That bit of the Great West Road (Gillette Corner to the Chiswick Roundabout) wasn't known as The Golden Mile for nothing.

I well remember the awful Sunday morning when the new owners of the 1930s Firestone Building sent in the wrecker balls and bulldozers, and completely demolished the facade of the building in a couple of hours flat. It was scheduled to be Grade II listed, but the DoE hadn't actually signed it off. Civil Servants were got out of bed on a Sunday morning to complete the paperwork on what was left, and the Hoover Building (on the A40, Western Avenue) was also protected at the same time, having recently been acquired by Tesco. Absolute vandalism, knowingly done.

....and keen observers and absorbers of knowledge from the pages of these threads will have got at least one question right from University Challenge last night.....

The answer was Matthew Boulton, he of Brentford tower-block naming fame, as well as being partner of James Watt, and member of the Lunar society of prominent figures in the "Midlands Enlightenment"

And bloody awful bedsheets... I remember those from my childhood.. Yuk...

A name to remember certainly but not good memories... Long gone and not missed!
Top

Bit busy for my liking if I was on a bike but a beautiful picture though...

Where is that?
Top

Heck, how do you enjoy the scenery in traffic like that?!
Answer: Carefully.
Top

white exec wrote:Heck, how do you enjoy the scenery in traffic like that?!
Answer: Carefully.


Or travel at a quieter time