upgrade goes to the finish line.. just waiting for additional speakers.. all painting was made by professional automotive shop and high gloss with exact same colour as original exclusive door trims. IMHO this should be standard from factory on all exclusives (at least jaguar and Mercedes paint that way)

some of the upgrades were made two or even three times (like rd4 to rneg then to rneg2 then to ng4) most two times. I counted and was surprised that upgrades cost almost as much as car itself. 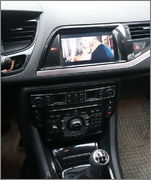 vborovicfan wrote: Due age of ng4 I have changed internal hdd for new unused unit for year free functioning (same brand- toshiba IDE conection but a bit faster and with better shock protection- an exact clone with acronis needs to be done)

I've just ordered a new SSD Drive for mine, using a PATA IDE interface though for compatibility. Nothing wrong with my current HDD and I don't use the Jukebox function, preferring instead to keep all music on the SD Card. I'm going to clone the drive using Paragon Disk Manager so I have a the original HDD as a backup and the new faster drive in the system. Won't get SSD speeds of course, but reports are that that the system boots a lot quicker and reacts a lot quicker when mapping too! As it is using SSD tech. the drive won't be susceptible to knocks like a normal HDD with a spindle, and should be a LOT cooler in operation - another issue that can cause the NG4 to play up when it gets too hot!

So I will see when the drive arrives.
Top

GiveMeABreak wrote: I've just ordered a new SSD Drive for mine, using a PATA IDE interface though for compatibility.

are you sure it will work? because I have read the guys who put ssd and it did not worked.. I would put ssd with no problem, just i thought its not working here..
Top

Yes it should be fine - as you know the NG4 isn't compatible with the SATA interface, but uses IDE / PATA. The Drive I have ordered uses solid state technology, but with an IDE / PATA interface, so should work fine. Like I said, obviously you won't get SATA speeds, but it should still be quicker in both booting the system and reading data from the drive, plus less heat etc. So that's a bonus really just for making a backup of the original - which is what I originally intended.

It is arriving on Monday (coming from Germany), so although I could of started already by removing and cloning original, I thought I would wait so I only have to remove the unit once (don't want to tempt fate)! I'll let you know how it goes when I've installed it

hmm.. it depends on controller your ssd have, as many ssd wont work at all. some can work but as ng4 does not suport TRIM after a while it can be even slower than ordinary hdd..
Top

Some have already done the upgrade without issue - the only problem is that you have to keep the same partition sizes - unlike some of the BMW lot (they also have the Harman Becker systems) that have a modified firmware to allow a larger partition for the music storage! Anyway - I still haven't used up half my 32GB SD card yet - so no need for the Jukebox on mine! Like I said - I'll let you know how it goes.

Well, drive arrived early, so cloned this today - but all was not well. When refitting, the drive booted fine - Radio worked, but Navigation kept loading, no voice control and no option to change media. So I reloaded the firmware on (another 45 minutes) and that didn't make any difference - so I suspect it didn't like the copy. So I'm sending the drive back today - no issues there - and will be trying to source another original drive for the backup. It's very hit and miss - a lot of people have had success and others not so PSA vehicles, BMW X3, X5 - all different results from varying drives and software used - so trial and error.
Top

OK car upgrade were done sucesfully last month. very few cars allowed me travel so silent refined and did this for 3.40EUR/100km fuel cost.
I now have second car Jaguar XF Supercharged V8 Portfolio ( unfortunately it do not need upgrades -from the catory it have Bower Wilkins audio, heated, cooled seats and steering wheel ,adaptive cruise, distronic,keyless entry, digital TV, camera, scaners for blind zones and all other stuff) its a diferent league/price car and does everything better (never expected v8 engine so silent and cabin noise with 295 R20 tyres are silent as c5x 7 with 215 r17) but still citroen c5 exclusive with some bits are one of then hell right car. my only complaint is engines. even v6 petrol are very slugish (engine is more or les decent , but gearbox is holding car- tried same engine in 6speed manual Peugeot - goes quite nice for 210hp)

Hello everybody.
I really liked vborovicfan tutorial for upgrading the c5 speakers.
So much that I'm going to follow it and upgrade my speakers too.
I'm going to start with the tweeters and the rear door woofers and I've accepted your recomendation and going with sb acoustics tweeters and woofers (SB29RDNC-C000-4 and SB17MFC35-4)
Regarding the crossovers what do you recommend? For tweeters I'm thinking of a 6,8uF capacitor in series, but no idea for the woofers.
About the installation on the grids and doors any advice?

PS: my radio is a RT6 (already upgraded from rneg following vborovic tutorial - thank you very much for your posts)