Re: Picture(s) of the day...Soviet Military Toilets

NewcastleFalcon wrote: Should there be a clamour for "Military Toilet Day" you have to give the public what they want!

I shall watch the response with interest, with my finger hovering over the 'upload' button

Neil, yes, BR Blue is a lovely livery but my favourite is Malachite Green that many SR 'Spamcans' were painted in..
Top

First up we have a montage of two photos of Soviet toilets in a couple of nuclear warhead stores. You'll all have noticed the similarities between the two - I hardly need to explain that the lighter one would have obviously been manufactured in Pan Factory Number 17 in Smolensk (I'm sure you all spotted that immediately), but it's worth noting the the slight discolourations in the casting material in the darker one - this was caused by confusion during handover from the previous factory boss who was moved on when he failed to meet that years production figure targets

Here we have a classic 'lower ranks' toilet - so designed because many of the conscripts had come from areas where 'squat' toilets were more common and never seen a porcelain toilet before and weren't quite sure how to use it - the pedestals either side are for their feet......

Here is a nice example of a fairly standard install of a toilet with sewage ejection pit right next to it. The cream couloured cans would not normally be sited in the toilet blocks - though they are for helping to purify the air when a bunker is in 'lock-down' mode. Known as RDU units.

A classic example of an East German - as opposed Soviet - toilet, denoted by the heavy use of plastic and the entirely tasteless bile green lid.


I'd like to take this opportunity to point out that I'm not mildly deranged, it's just that I've spent the last 15-20 years documenting various Cold War sites in the UK and Europe, and it's inevitable that I'd photograph some crappers during that time

So you know more about s**t than you do about cars.

Gibbo2286 wrote:So you know more about s**t than you do about cars.

Oi !!! I resemble that remark

Every day is a school day

One for the railway fans
Beeb
5,500 passengers on the Carlisle to Settle line in three days.
Top

Bobins, thanks, that's excellent... I enjoyed that tour

I guess those Russian pans are bog-standard ones?

That thin toilet would be perfect for me

All the way to the bogs of Russia!

Gibbo2286 wrote:So you know more about s**t than you do about cars.

That did make me giggle...
Top

myglaren wrote:One for the railway fans
Beeb
5,500 passengers on the Carlisle to Settle line in three days.

How excellent! It really brings in the crowds... makes you wonder why Network Rail haven't really capitalised on the potential of this - they still have some very scenic lines, the Scottish Highland ones and the Cambrian Cost lines in Wales to name but two, and one would have thought that would have taken on the well-known heritage lines with their own take on the old nostalgia theme years ago... Some NR lines are still pretty much as they were originally architecturally and some still have semaphore signalling. An opportunity crying out to be exploited...
Top

My contribution to military toilets day

Brief extract........
Second World War U-boats were fitted with a high-pressure submarine toilet. These directed waste from the toilet bowl through a series of chambers to an airlock where it was expelled by compressed air into the water. Using the device was so complicated that it required special training and the operative had to remember the exact order in which to open and close various valves to ensure the waste went out and the sea didn’t come in.........

You can find out what happened to Captain Schlitts number 2 from the link.....

NewcastleFalcon wrote: You can find out what happened to Captain Schlitts number 2 from the link.....

Love it! You might say he ended up in the poo...

or up poo creek!
Top

Well the white heat of technology, driverless cars, and full scale scalextric, with software engineers as the new heroes is getting a bit of a pasting from the FCF congregation over on the electric vehicles thread, so maybe a time for a bit of nostalgia on Picture of the Day......the days from the 1960's when paraffin could be served "Blue" as well as "Pink"...and the USP of the Blue....it didnt smell when you burned it in your parrafin heaters at home!

Randomly appeared in a list from Geograph of pictures taken on this day....bum,bum,bum....Esso Blue! 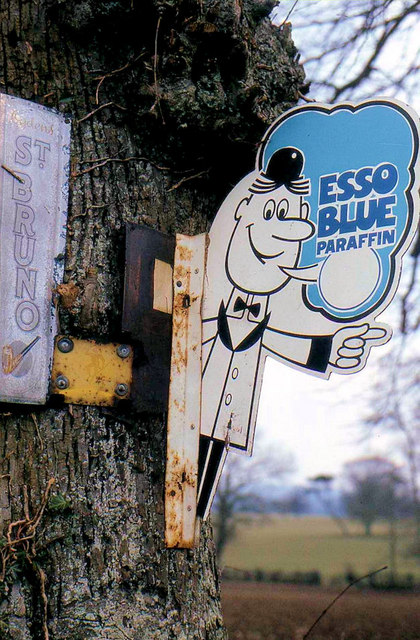 "Esso Blue" advertisement near Lisburn
A sign advertising “Esso Blue” paraffin, accompanied by a fading one for “St Bruno” tobacco, on the Ballinderry Road at Brookhill. The television advertisement can be seen here https://www.youtube.com/watch?v=-NRbmfLVoWo
from Geograph by Albert Bridge
usual creative commons licence

Oh and heres a bit of trivia from the first advertisment to appear on British Television which I discovered along the way. It was an advert of course for "Gibbs SR Toothpaste" maybe a one mark pub quiz question, but for a considerable bonus....what did the letters SR Stand for? Clue...sounds like it would be effective on the tip of a pointy umbrella