I don't really know her, they live at least 100 yards from me and are new neighbours, only lived here about five years

I see her taking the birds for a 'walk' up in the fields at the back of the houses, usually trailed by a retinue of kids.
She looks like Dolly Parton so I call her Jolene.

There's an aviary full of raptors in the next street too.
Top

Yes, 5 years is still a bit soon to be fully accepted as good bona-fide neighbours isn't it... I guess they're still on probation

It took some of mine that long to accept me and I've been here 14 years now...


myglaren wrote: She looks like Dolly Parton so I call her Jolene.

That conjurers up an image I'd best not dwell upon

I would think it unlikely that many members of the FCF will have occasion to visit Seaham a town on the County Durham Coast about 7 miles down from Sunderland. There's a statue known affectionately as "Tommy" created by Ray Lonsdale.

One of the most moving images of "Tommy" was captured by a photographer called Chris Boundey.

If you google "Chris Boundey Tommy" its first up on the image list.

While the above image is poignant and reflective, I also like this image of the innocent spontaneous fascination of the youngsters in this picture with "Tommy". The official name of the statue is/was 1101 to represent the first minute after the armistice went into effect at 11am on November 11, 1918.

Classic Car Motor Show at the weekend which some FCF members may have attended. A couple of old police cars have appeared at recent auctions for under £10K, but unlikely that a RS2000 Escort would come under that thread's umbrella these days. From a selection of CCMS 2016 highlights on "Honest John" we have...

...and a third example from HJ's selections from the show. A SAAB 96 "Short-Nose" 2-Stroke

I was there on Saturday. It was good...

You missed my favourite at the show, two actually, a Rover P6 Police ' Jam Sandwich' and a very early brown P6 on a C plate...

I saw the Stretch Estelle and thought of Zel...

The show is now massive and more than one day is ideally needed to do it full justice...
Top

CitroJim wrote:I was there on Saturday. It was good...

Jim, is there just the faintest possibility that you may have inadvertently gatecrashed Honest John's photo here

Lets imagine we are playing "Battleships" (the pencil and paper version of course) with a grid A to J down the side, and 1 to 10 across the top.

..Talking about Police Cars....decent enough topic for "Picture(s) of the Day". Of course there was more variety to choose from up to the 70's should a formal or informal "Buy British" policy have been operated, but many types of now "well-loved" classics have made it to Police Car status. Not talking about the stuff your detectives supposedly mooched around in like Morse's Jag or the Sweeney's Granada but the fully logo-ed up car with the flashing lights and sirens.

Loads to find....please chip in with a few examples if you can

and what was the first "foreign" car to make it to UK Police force ranks? Volvo? BMW? ....I know the old Triumph and Norton Bikes got superceded by the likes of BMW and Honda.

I think I may have found the answer to my own question....


The Hampshire and Isle of Wight Constabulary started it all in 1965 when they dared
to go foreign. They purchased Volvo 121 Amazon estates, painted them in white and
fitted the new fangled two tone horns to them. It was quite literally headline news and
questions were even raised in the House! Letters of disdain were written to Autocar
magazine accusing Hampshire Police of ‘lapping it up in luxury’. The politics involved clearly put off most other forces for several years and they continued to buy cars from the likes of Rover, Triumph, Ford and Vauxhall.

...and here is one of those original vehicles, from this well-researched account http://www.hampshireconstabularyhistory ... ies/derek/

which revealed that the Citroen DS 19 Safari estate, and the Humber Super Snipe Series 3 Estate also made the short-list, but were not selected. Its a fascinating story, with ultimately the restoration of one of the original 5 Amazons but not without its disasters along the way

CitroJim wrote:I was there on Saturday. It was good...

Jim, is there just the faintest possibility that you may have inadvertently gatecrashed Honest John's photo here

Lets imagine we are playing "Battleships" (the pencil and paper version of course) with a grid A to J down the side, and 1 to 10 across the top. 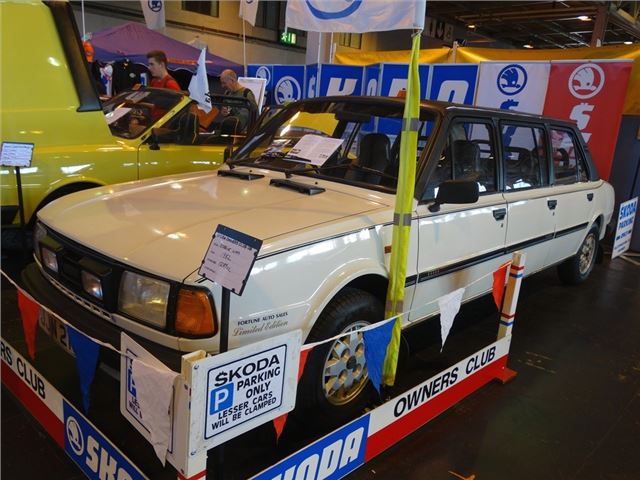 No, not me Neil even though it looks very much like me....

I was wearing a black top...

Enjoyed all the Police cars

Hard to take the Maestro, Montego and Volvo seriously as hard-core police vehicles but the Triumph certainly cuts the mustard!

The 'SOB' plate on the back of the Maestro is likely what a lot of those stopped by it did... Sobbed because they had the indignity of being caught and stopped by a mere Maestro

Almost as bad as being apprehended by a copper in a Morris Minor!
Top

Here's an image which poses a question

Is it a genuine vehicle used by the Gendarmerie or has someone decided that it was a good idea to paint the word Gendarmerie on a perfectly good Citroen SM.

When my brother worked for Jensen Motors in West Bromwich they were building bodies for the Volvo 1800.
Top
Messages: 8185