Anyone know their motorbikes? That's 500cc's there in a single pot, first registered 1st November 1967. Genuine picture of today..all my own work! Parked outside Northumberland's remotest tea-room. 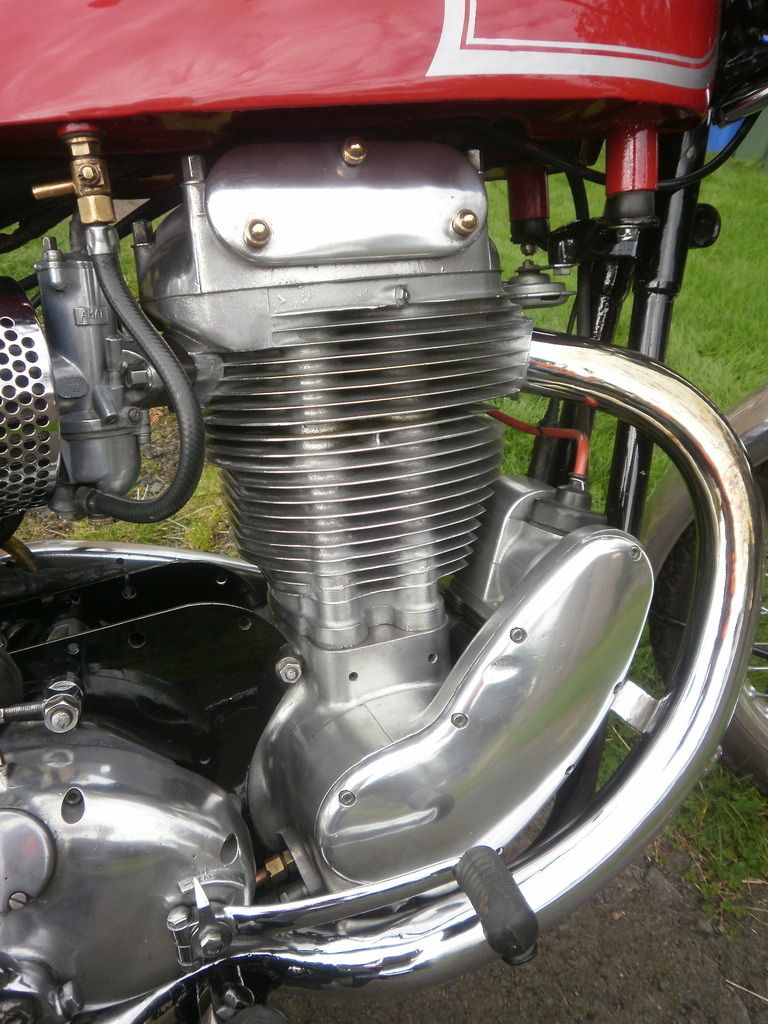 I am thinking it is a Norton, but I never knew the model designations. 1967 seems very late for that engine configuration with Lucas magneto.
Top

It certainly is very old-school for 1967 but a lot of British bikes were.. It's what led to their demise in the end...

It is a beautiful timeless bit of engineering

I'm tempted to say it's a Matchless or AJS....
Top

This one gives it away, not sure of the exact "Model" but it was definitely one of the last throes of the Matchless brand, as it got taken over and exterminated under Norton-Villiers. 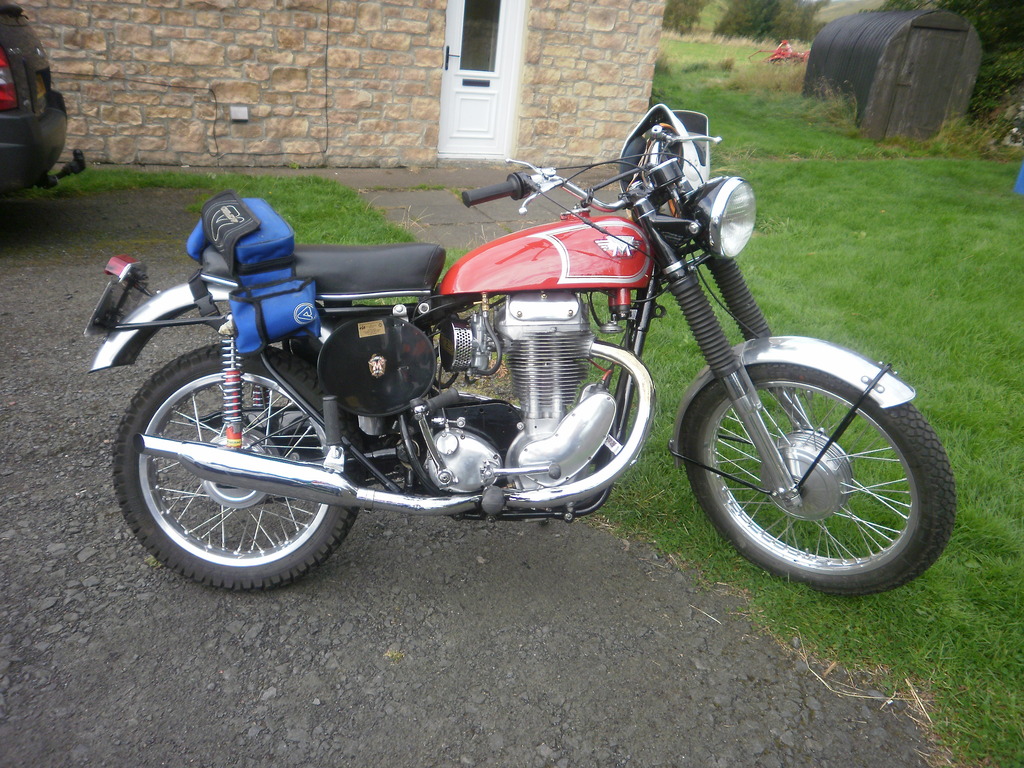 CitroJim wrote:It certainly is very old-school for 1967 but a lot of British bikes were.. It's what led to their demise in the end...

It is a beautiful timeless bit of engineering

Followed it a good 10 miles down the valley, quite manouverable round the wandering sheep and only got the slightest whiff of oil as it powered up the hills. Looks the perfect sort of bike to learn about tinkering about with engines etc., probably about as straightforward as they come.

It was the cam/rocker cover that gave it away Neil... Matchless and AJS were one and the same, just different badges - think Austin and Morris...

That bike is a timeless classic and very straightforward indeed apart perhaps that it runs a dry sump but then in the vintage period, most bikes did... Odd that dry sumps are not used nowadays. They made a lot of sense then and would do now too... Makes oil changes very easy!
Top

...dry sump needed a bit of looking up, but handy if leaning over weaving through a flock of sheep...no wet sump oil sloshing about from side to side!

...and for the benefit of FCF members unfamiliar with the wilds of Northumberland this is from the geograph square kilometre where the tearoom is.

One of my rare motorbike jobs back in the fifties (I hate bikes) was to rebuild the engine on a Matchless 500 twin, it had been sold by the company I worked for and had dropped a con-rod through the casing (leg out of bed). so a warranty claim

The boss wouldn't sanction a new engine so I ended up with a scrapper with the opposite side con-rod through the casing and built one good engine out of two busted ones.

The bloke who owned it crashed it at 100mph on the riverside road at Worcester, he survived but had to have his face rebuilt, wired up cheeks and jawbone, spent months feeding through a straw.
Top

I must own up to having had a 1961 Norton Jubilee. Sorry about that, but someone had to own one! My first and only motorbike, after a Vespa 125. £25 from Jack Demmar in West Ealing, in about 1964. For that money, I had a choice of five 250cc twins, and he didn't stop me buying it.

Not the most reliable (or lightweight) of machines. Oversquare engine, dry sump. Decided a few weeks after purchase that it would blow off its oil feed pipes at the sump, dumped all its oil on the M4, and seized - snapping a con-rod and poked it through the crankcase for good measure. The first time (of several) that my Dad had to tow me off the M4 with hIs pre-war Rover.

Undeterred, a visit to Pride & Clarke in west London, where they had what seemed like an indoor acre of engines, and a choice of several Jubilee engines, all for £15 apiece. Next day saw the engine installed, and a goer. Only downside was its tendency to slowly dispense gearbox oil all over my left boot, something which I never did manage or bother to sort.

Punctures plagued this bike, which spent a lot of its time running between Ealing and Caversham (where the girlfriend lived), via M4 and old A4. Good bit of weekend time was spent exploring Berkshire and Oxfordshire (and the girfriend), includimg off-road jaunts along canal towpaths, old Roman roads, green lanes and tracks. Was about this time that I developed a real fondness for the Chilterns and Cotswolds, previously explored on the Fred Dean), but this time with the girlfriend, and regular doses of Brakspears, and good pub food.

The bike and I parted company when I passed my car driving test, in a Morris 1000. Dad moved on to a 1947 Rover 16 Sports Saloon, and I inherited the 1935 Ten. The girlfriend and I married five years later, and were together for a good few years after that.

Although I still have a full motorcycle licence, I've never felt the urge to acquire another. About ten years after getting rid of the Norton, a friend turned up at our Sussex home, with what I vaguely remember was a 350-twin. I still had my helmet, and took it for a gentle jog around some country lanes in Rudgwick, and frightened myself silly. Was pleased to get back in one piece!

In recent years, had the odd quad bike run, which was good fun. Think I prefer some decent metal round me, though - and some of the world's best suspension underneath.
Top

I very nearly posted up the pic of the Matchless on geograph for that particular square kilometre, but drew back thinking that the moderators may well reject it as not being geographic enough, seeing as its an image of a motorbike with a tiny bit of the tearoom, and a corrugated iron hut in the background.

It is very representative though of a bit of human geography, and is the reason why many people have a beautiful drive up the valley and its splendid isolation, and actually stop off in that particular square kilometre. Maybe I should have got more of the tearoom in.

I also thought that it would be good form to ask the owner of the bike first, but our ships have now passed in the night, although I do suspect the gentleman or lady will be local to the North-East, as that bike could not be described as a comfortable tourer!, and the population of Matchless owners probably know all the other Matchless owners in the area.

..and surprise surprise the border group of the Matchless/AJS owners club meet on the first Wednesday of each month at the Bay Horse Inn at West Woodburn.

Gibbo2286 wrote: The bloke who owned it crashed it at 100mph on the riverside road at Worcester, he survived but had to have his face rebuilt, wired up cheeks and jawbone, spent months feeding through a straw.

That's the problem with bike crashes. So often they result in very severe injuries in accidents and it's one thing that really puts me off having a big bike these days...

When you're young you think you're immortal but as you age you learn the truth...
Top

Bikes on the road terrify me. I enjoy playing on a cross bike off road. I would go around a race track on a bike too, would love to in fact. The roads just not a good place for them, far to many cars and solid things.
Top

elma wrote:The roads just not a good place for them, far to many cars and solid things.

Sadly yes, applies to my sort of bikes too but the risks are a lot lower thankfully...
Top

Anyone know their motorbikes take 2?

From today, Geograph Square NY8383, all my own work again

, and another iconic single (with a twin behind it), this time from 1959, and an absolutely gorgeous bike. 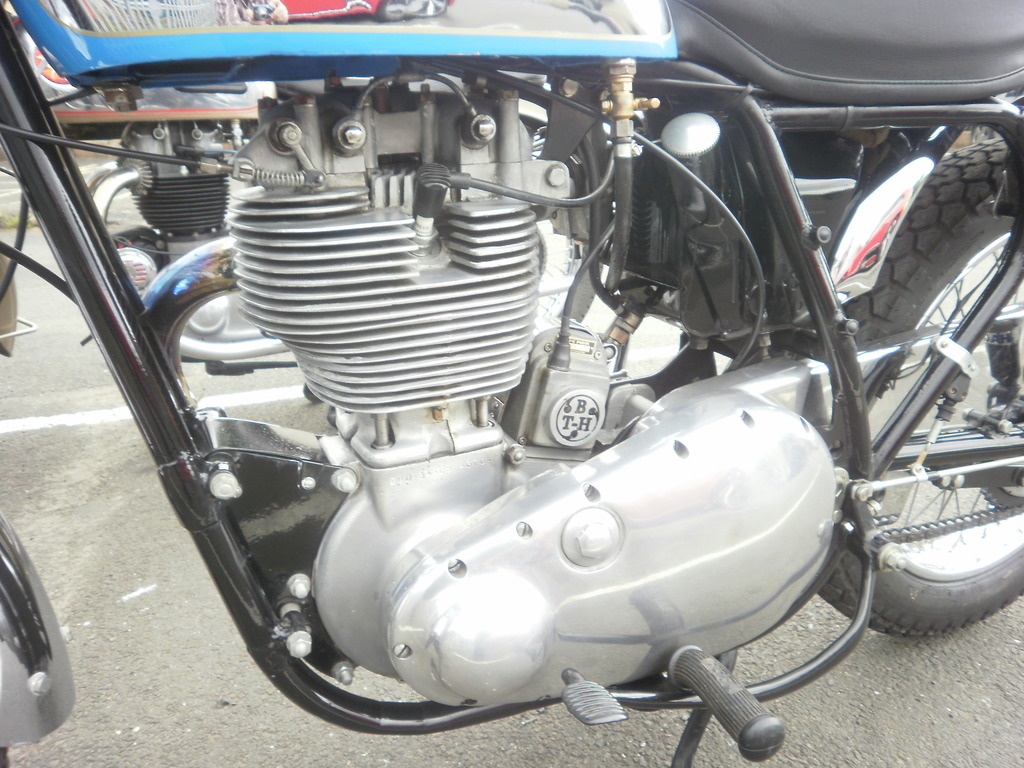 Took a few pictures, and had a little chat with the owners. Yet another unbelievable "what are the chances of that happening?" moment. Of all the tearooms in all of Northumberland, at that exact time, we meet two blokes at Carriages (in an old railway carriage at the former Bellingham station), who are personal friends of the owner of the red Matchless, the subject of yesterday's "Picture of the Day".

It's as old as me

Sometimes I feel like I'm fired up by a nice BTH Magneto!!

It's in lovely nick and has typical British alloy castings - how they polish up is just gorgeous and unique to the British alloy...

Can't identify that one, was never very good on the sporting ones, always leaned toward road bikes and café racers more than the old mud-pluggers..
Top
Messages: 8169