According to their website it took 19 years to go from original idea to 'Tornado' raising steam for the first time. It did cost £3m to make her, but I do not know how much of this was labour. Without knocking them, there is only so much enthusiasts can do before requiring expert knowledge and skills.
Top

harryp wrote:Jim, was under the inpression that the labour on the Tornado was supplied by "enthusiasts" and therefore "free", or was that Journalistic License??

Harry, New-build or rebuild involves a lot of professional (and expensive) services well outside the remit and ability level of most volunteers... Boiler making, boiler testing, casting, machining, bearings, certification, signalling compliance equipment, tyres and so on.

The point I was making was that all things being equal to build new is more economical and likely more reliable in the long-term. Especially with 'plandampf' now a tantalising reality. Take the case of 'Lizzie' who failed with weeping boiler tubes only a few weeks after re-entering service after a long and very costly overhaul. She's now withdrawn as it's going to need another fortune spent on her boiler and so far, donations have been sparse.. Her boiler ticket may well have expired by the time she's done and then there'll be more expense to get her re-ticketed..

It's taken the standard gauge heavy rail boys a long time to work out the economies of new-builds but the narrow gauge lads have known this for years now and new-builds are often the norm to replace time-expired and worn-out stock which is not tremendously historically significant. In a lot of cases a big and extensive rebuild is almost a new-build and in retrospect many projects would have been far better off as new-builds from the outset.

But a different set of rules apply.

Here we're speaking of commercial business activities, the need to run reliably and above all, safely and be worked hard, especially at 100mph on NR metals...

The safety and well-being of many hundreds of passengers is also paramount.

I agree about the character and soul 100% but in the hard-nosed reality I still think new-build makes a lot of sense....

None of that applies Gabriel, I hope

Geograph has a nice one for photograph of the day this morning. 2hp up in the hills of the Lake District. It looks as if the ponies have been cut and pasted onto the photograph. As ever click the photo for a larger view. 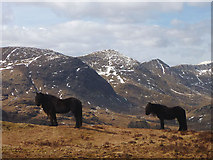 © Copyright Karl and Ali and
licensed for reuse under this Creative Commons Licence.

I very much like the facade of this Station and in particular the rather obvious sign just in case you weren't sure announcing that this is indeed the "Railway Station".

Should you wish to select a bicycle for a short commute, many car makers now have moved into the "branding" of push bikes. Came across this gently sarcastic commentary on a few, and as followers of the "What do you know about Norfolk?" thread will know, you can get an Aston Martin bicycle made and branded in that County!

Re: POTD-bicycles by Car Makers

NewcastleFalcon wrote: Should you wish to select a bicycle for a short commute, many car makers now have moved into the "branding" of push bikes. Came across this gently sarcastic commentary on a few, and as followers of the "What do you know about Norfolk?" thread will know, you can get an Aston Martin bicycle made and branded in that County!

I think this is a perfect illustration of why car makers should stick to cars and let bike makers do what they do best...

Most are awful in the extreme

Someone’s idea of a cruel joke?

The Caterham and the Peugeot defy the rules though and look excellent but then Peugeot have a long and proud history of bikes and top-level participation in the TdF...

I'd have the Caterham in a heartbeat...

The rest of them, especially the Audi and BMW ones I'd put out of their misery as soon as possible! As they say about the Beemer... 'Already folded and ready to be put in the skip'

That's not the only bike Aston Martin have done... Another of their creations was, in the day, really bleeding edge and revolutionary... Looked very good too...
Top

This caught my eye....today's geograph photograph of the day is from "Big Sands" just up from Gairloch on the West Coast of Scotland. Spent a good holiday in 1972 up at Melvaig, a few miles up a dead-end road from here. 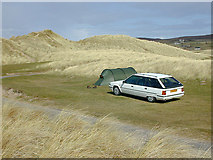 © Copyright Nigel Brown and
licensed for reuse under this Creative Commons Licence.

We camped at Gairloch/Big Sands site too, more than once, in both '70s and '90s. A terrific place to stay, among the dunes, and with a spectacularly long sandy beach. Sunsets out across the Islands were fabulous.

I also remember Melvaig, and Melvaig Potteries (in an old school, I think). We still have some of their coffee mugs, hand-thrown by the young couple that ran the business. On display shelves were lots of other interesting pottery items, including several quite fascinating things called "pornopots". I cannot go into details here, of course...

On our first encounter with Gairloch, we treated ourselves (as a break from camping) to a 5-star evening meal at the huge grey granite lump which is the Gairloch hotel. Not to be forgotten: a bevy of waiters, good wine served with ceremony, and superb food. Years later, we needed some camping gas, and went into the local hardware shop. Who should serve us but the wine waiter, now owner of the shop! Apparently Best Western had taken over the Victorian lump, and several of the staff resigned as standards tumbled.

Fond, fond memories . . . and that BX Break has to be one of the best ways to see the Western Highlands.

Happy memories for me too Chris. Our mode of transport was a good old 1966 Grey Austin 1800, and we stayed at "Coel Na Mara" (voice of the Sea) a B&B and evening meal booked out of the "Farm Holiday Guide" which was always the source of our holiday stays. The piped water into the "croft" was a delicious peat-stained brown as a novelty but apparently perfectly drinkable. I think you had to ask the owners for the plug if you wanted to have a bath! They kept chickens so every meal had some culinary concoction based on the eggs! Right next to the sea so fishing a plenty, and a bit of pitch and putt at Gairloch with a backdrop of wonderful scenery. My first experience of the view down Loch Maree on our way up, absolutely wonderful, and saw a Golden Eagle round Torridon as well. Still got the pictures my dad took in one of his hundreds of boxes of slides...have to dig them out for a reminisce.

Regards Neil
PS
The view down Glen Docherty to Loch Maree from the "viewpoint". Not the best oif pictures and the view changes with the the weather lighting and time of day, and it can be shrouded in mist and drizzle. I always remember it as a sunny day with Loch Maree a beautiful blue in the distance!

Glen Docherty from the viewpoint

That view of Glen Docherty and Loch Maree is likely to be part of the planned North Coast 500 trip in September. Sign up, if you haven't, for an unforgettable road trip from 3-9 September.

The photographer who took the picture of Glen Docherty and Loch Maree Jim Barton, also took the images below. I have been to Duns many times but have never taken the time to notice the bear or read the story. The same bear is honoured in Princess Street Gardens in Edinburgh which I have probably been through hundreds of times and never noticed either.

So here we go Wojtek the bear.....take a bow...you've made it to POTD!, and should any FCF members visit Edinburgh or Duns prepare yourself to be patted! 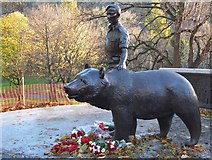 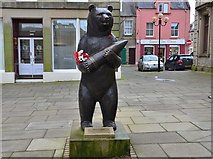 © Copyright Jim Barton and
licensed for reuse under this Creative Commons Licence.

This little 10 minute or so, documentary tells the story of Wojtek, worth a watch...

This is geograph's featured photograph today, from a 1km square not many people would have visited, on the very edge of Yorkshire. There is an "Acoustic Mirror" in the same square if you explore.

© Copyright Mark Stevenson and
licensed for reuse under this Creative Commons Licence.