Now the Metro was good

I know, I had five of them!

Shame that in the later models build quality suffered...

The MG Metro Turbo is still one of my all-time favourites and one car I always regret selling...
Top

daviemck2006 wrote:Maestro was an underrated car. I had one of them, followed by its big brother montego. The maestro was 1986 C reg, and the bottom of the doors were rotten by 1990, when I traded it in for a new montego on 1st August H reg. It only took less than a year for the rust to have to be treated under warranty! It lasts yo Jan 1993 before being traded in for a Japanese rover 216. I always had a soft spot for BL having learned to drive in a princess.
And I loved old Leyland tiger coaches, with the clutch less manual gearboxes with the tiny gear leaver on the dash to the right of the wheel. Compared to the full manuals that you got a gear if you were lucky, they were great. A little blip of the throttle changing down, if you timed it right it was ace! We had an old tiger at Deveron Coaches where there was a totally botch job of the linkages. 1st was where 6th should be, 2nd at 5th, 3rd where 4th etc. The usual driver had no problems with it, but when I got given it for a school run one day,,,,,,,,let's say the kids did not get a smooth drive to school that day[emoji23]

Amber Travel based just outside Turriff ran our school buses, and our usual was an ancient Bedford Y series Duple Dominant. About two brake mouse power and a gearbox that could only be navigated by those who knew the bus. It was always utterly hilarious seeing a new driver trying to find first on the really steep hill outside the school, lurching ever closer to the bus behind us. Granted, a few years later my first time driving a YNT wasn't much more graceful, there are five gears in there, but I swear that they move every time you change gear. Most baffling one I ever encountered in a coach was in an old Scania which had a split ratio box, fair enough except that the shift pattern in the top four gears was different to the rest. Not a problem once you know, but it didn't half confuse me just outside Aberdeen when I discovered that while on the move.

When we had First's open top Atlantean for the Aberdeen city sightseeing tour a few years back I had to explain the concept of rev matching on a semi-auto box as the driver had never encountered one before. First thing that happened immediately after we pulled away on Broad Street was me landing on my back as he went from first to second with his foot still on the floor. I was not amused. Another thing about that bus - whoever installed the tachograph was an idiot! They went and positioned the thing directly in front of the steering wheel hub, rendering it completely impossible to see the speedometer unless your forehead is pressed up against the windscreen. She only does about 45mph flat out (would do plenty more with another gear or two mind you) but in a 30 or 20 zone it's nice to be able to actually see the speedometer.
Top

That gearchange sounds like an early Austin Maxi gearchange

Not far off, Jim!

Thinking back, the one in the old Merc 308D van I had for a while was similar. You just kind of shoved the lever in what you knew was vaguely the right direction and crossed your fingers that you would find a gear. If you were really lucky it might actually be the one you were looking for.

Worst box I've come across in a car though has to be the one in the Mk II Fiesta we had for a while. There was no lockout on reverse and it was a complete lottery as to whether you got first or reverse in the left and forward position. To the extent that I actually fitted a warning light on the dash wired into the reversing light circuit so you at least had some indication so we didn't end up reversing into someone at a junction.
Top

I had a MKII Fiesta for a while Zel and don't recall that particular problem but I do recall having to renew the clutch twice in a short space of time because the small bolt holding the release bearing fork to the clutch actuating shaft sheared and thereby stopping the clutch working as it should. I believe Ford redesigned the bolt after it became clear it was big problem.
Top

There was always a chance that on Volvo B10M manual boxes of getting reverse instead of 2nd. And first was so low we usually pulled off in 2nd, or reverse as the case may be lol. That was only on ancient van hool coaches that stagecoach inherited from private operators that they had bought out. Having said that I preferred a manual over an auto, espically if it's gear linkages were worn out from millions of rough service bus drivers!
Top

.. On to the the only German on "Zel's bumper spots"....the white VW Scirocco. 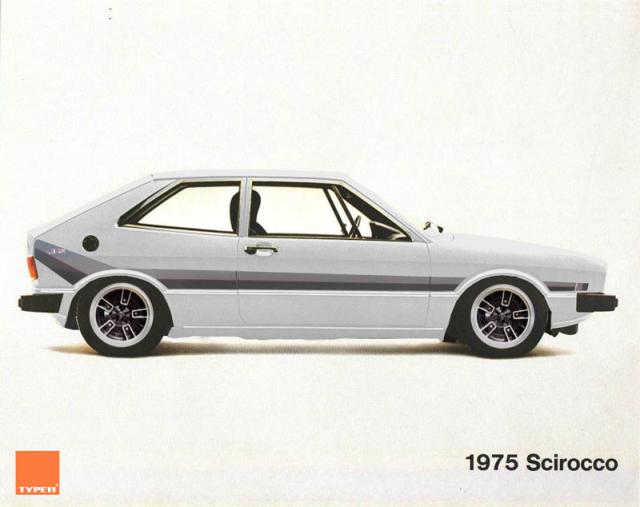 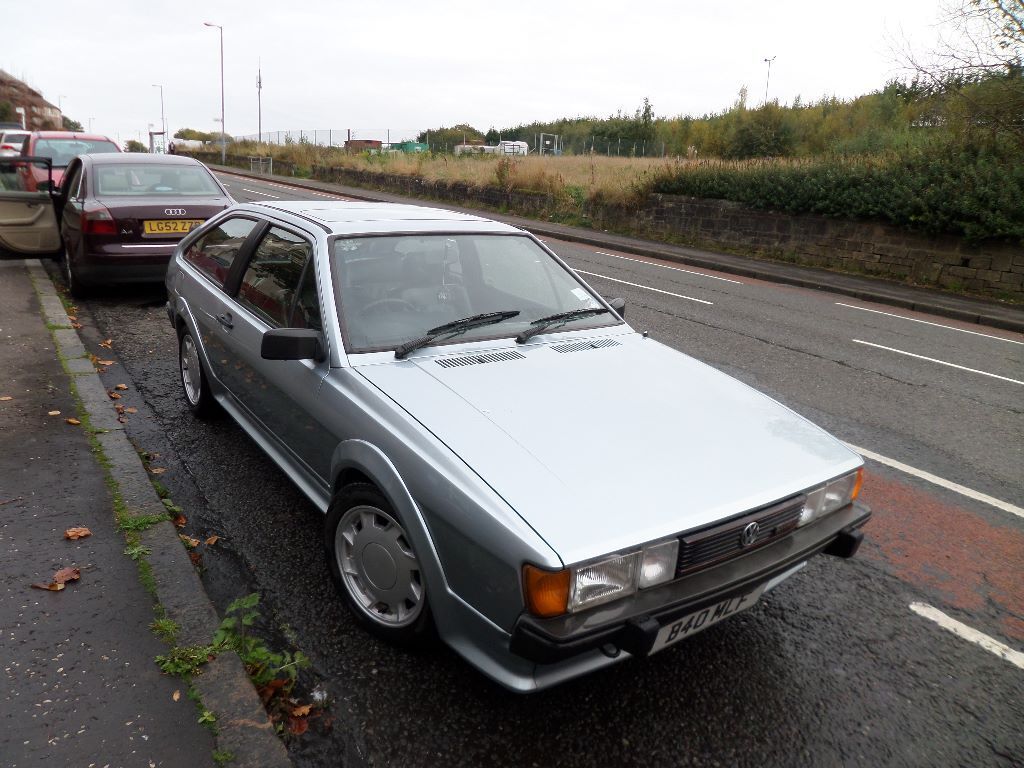 Interesting connection to the Italdesign Giugiaro Audi 80-based Karmann "Asso di Picche" (Ace of Spades) concept presented at the 1973 Frankfurt motor show which never made it to production partly because of the planned launch of the VW Scirocco by the parent company Volkswagen.

There is something satisfyingly precise about the lines (spoit a bit by that thing on the bonnet though).

Zelandeth wrote: Unknown age Saab Classic 900 convertible on H6, had a private plate but I can tell it's a post 86 car.
Finally an X plate (as in X suffix) Daimler Double Six, that was parked up in the lower carpark in Sainsbury's. Owner arrived back at the car at the same time as I did and we must have spent half an hour chatting. He was as interested in the Saab as I was in the Daimler!

Hows this as an example of a SAAB Classic 900 Convertible? 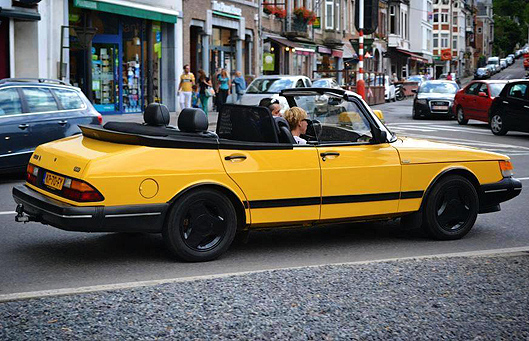 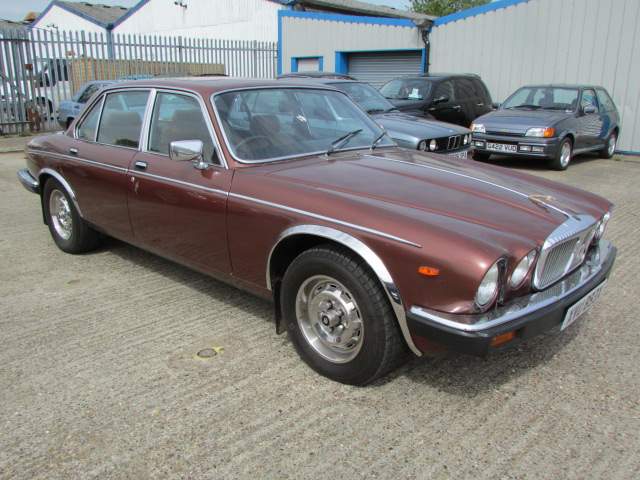 That Saab 900 is the right colour as it's probably bent, or going to bend in the middle very soon, like a banana through rot on the bulkhead

Always wanted one - I had 5 C900s, but every single ragtop I looked at was starting to rot badly. Shame.

Four door convertible? Never heard of that before...

Good colour though. 900s do like to rust unfortunately, doors, boot floors and most seriously the tunnels in the chassis rails where the driveshafts pass through are favourites. They're a right pig to repair there too as it's a horribly complex bit of metalwork.
Top

That is identical to my daughter's second 900.
Top

I like that 900 rag-top. very pretty in yellow and black!
Top

Laura loved hers but wanted something cheaper to run so sold it and bought a Clio.
Which she hated and wasn't much cheaper to run.
Top

Re: Classic car spring/summer season-what have you spotted?

Time for a title change.....snowdrops/daffodils/crocuses in flower, roe deer with antlers in velvet, rooks building nests, lambs in the fields......yes its spring so autumn winter season is officially over in the Northern Hemisphere ( at 55 degrees North anyway!)

I think Cornwall had bluebells on the BBC Weather pic......still a bit off up here yet.

So who is going to land the first classic car spot of the new season? and is some kind of reward, appropriate for the honour of the first spot.

A cup for catching the first spring salmon on the Coquet is presented by his Grace the Duke of Northumberland in Alnwick Castle and the successful "rod" gets a replica of the Coquet Cup to keep, as well as three years free fishing on the Federation waters! Any suggestions for an appropriate FCF "award" for the first classic car spot of the new season are invited.

NewcastleFalcon wrote:
There is something satisfyingly precise about the lines (spoit a bit by that thing on the bonnet though).