The 3500S estate must be the most desirable of the rare P6's 9especially with a subroof), not sure that I'd want, e.g. a 2000 convertible or a Triplex glass roof jobbie.

They were all conversions but, I believe, available through main dealers in the usual way.

I stand corrected over the colour, but, yes, estates do look better in dark/strong colours - not. if you wanted one now, you'd have any choice.
Top

This morning I walked past the back gates of one of the posh hotels in town and saw this tour headed off for the day.

Reminds of a time, in 2000 or 2001, driving over "The Bridge" in Sweden & coming towards me was - a 4 1/2 litre blower Bentley! Apparently he been to the Arctic Circle to raise funds for charity.
Top

The rare P6 Estates did not come off the Solihull production line...

"It was principally the British Leyland takeover in 1967 which killed off production prospects for the Rover-commissioned 'specials', but the estate variant was built in limited numbers, albeit as an aftermarket conversion by FLM Panelcraft, not a production model by Rover. Briefly known as the Panelcraft Estoura, the car was at first marketed exclusively by Crayford Auto Development (and these cars had the Crayford badge), then by Hurst Park Automobiles of East Molesey, Surrey, and after 1970 by H.R.Owen, when it became known rather misleadingly as the 'Owen conversion'.
Conversions were available on used as well as new cars and after 1968; a 3500 version could be obtained. The 2000 and 2000TC estates remained rare because they were too expensive for a market well covered by Triumph's 2000 estate. The 3500 estate was a success, however, and before [P6] production stopped in 1976, a few 3500S estates with manual transmission had been built.
Exact figures are not available, but it seems that between 150 and 160 P6 estates were built."
- from James Taylor's The Classic Rovers 1934-1977

Visually - and practically - the elongated estate conversion was not particularly successful, principally because the designers were hooked into following the rearwardly descending roof line... 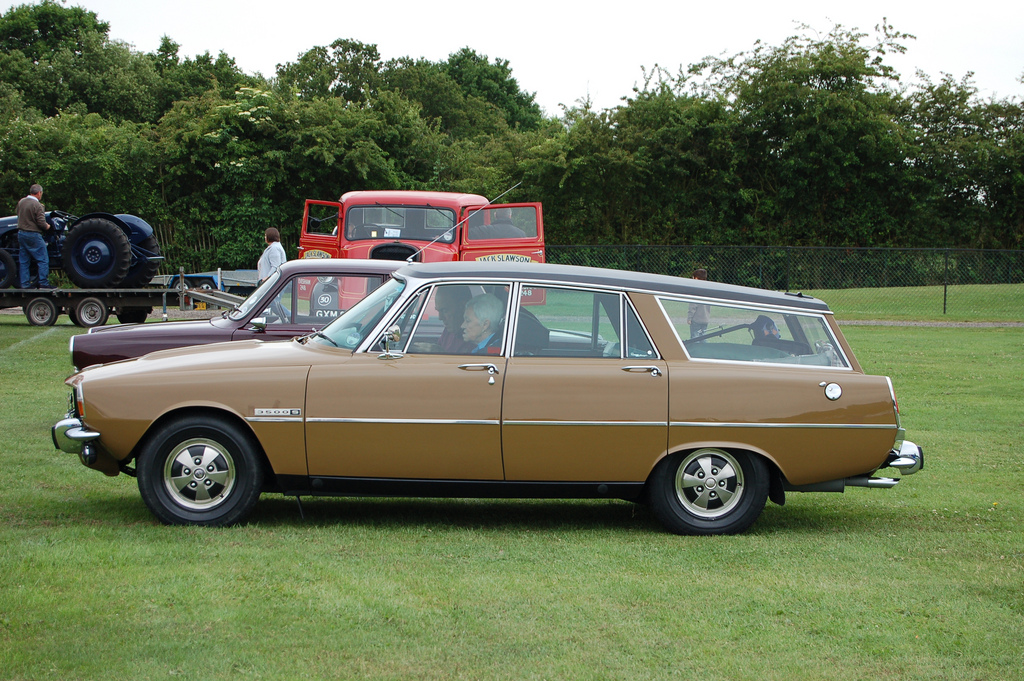 Some conversions were more successful in this respect... 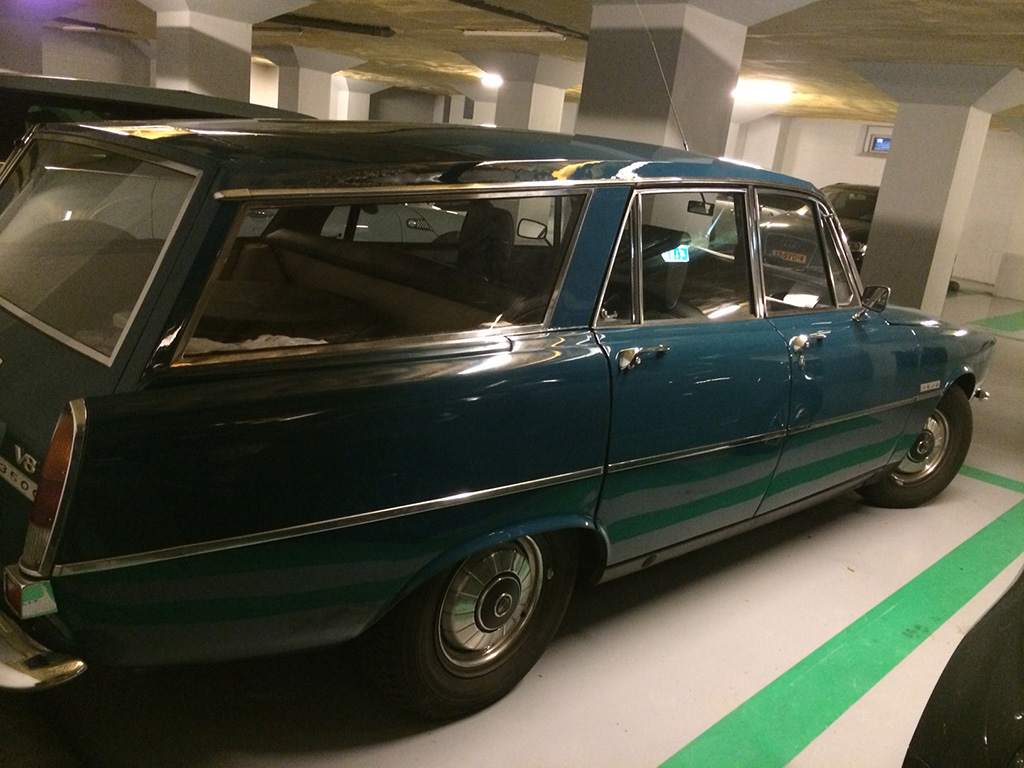 One of the best, though, was Rover's own prototype for an SD1 Estate. They made about four, of which two survived. This one was run for some time by BL CEO Sir Michael Edwards, in its eventual experimental colour of Midas Gold - not without some irony there.

I think Rover were mad not to put it into production, at a time when there was huge appetite for Volvo 244/246 estates. By this time, Triumph's own 2000/2500 estate had been killed off to make way for SD1 (initially RT1), so there was no product overlap, no excuse.
Top

...and your first pic Chris has got to be what is known as Tobacco Leaf I presume.....and that picture, regardless of the lack of practicality of a straighter tail end, looks pretty good to me

I think Nobby Fry at FLM Panelcraft's, first go had an even greater drooping, almost beetlesque back end.

This may have been it

No Tobacco's much darker'n that, well mine was (is?)!
Top

That is Tobacco Leaf above. The much darker brown was Mexico.
Neil, that very early estate prototype must have been done on one of Rover's factory cars, many of which - including Rally cars, were JXC anf KXC registered.
A good few estate cars, including Volvo and Citroen XM, kept the rear doors as per hatch/saloon with their descending top edge, but straightened out (raised) the roof line to provide practical internal space.
Not sure, but I think the P6 estates retained essentially standard rear wings too, which others didn't.
Top

Chris, thanks for the P6 estate history

The SD1 estate looks magnificent! You're right, it was indeed madness never to put it into production

So in all the decades I've had the car, I've never actually known what colour it was, i.e. beyond simply brown.

Whether the original rear wings were retained would, I'd have thought, depended on were the fixing bolts were - & I can't remember.

Preserving the roofline means not having to change the door tops (quite a performance/expense I would imagine on something like a Mk1 Consul) which is why some estates look so odd from the side, PA Cresta spring to mind!
Top

I may be in the minority here but I rather like the swept-down roof-line of the P6 estate...

Tobacco Leaf is such a 70s colour!
Top

As is any shade of brown (I ran my 1st 3500S + a 2.5PI - both brown - in parallel. All I can say is they were both bought in circumstances that colour could not be a consideration).

Bizarrely, it seems to be enjoying a renaissance - presumably among those too young to remember how awful they were the 1st time round.
Top

Yes, but back in the 70s we all loved brown.. It's only right this generation will too - fashions go round in cycles...
Top

Filling up at Tesco in Gloucester yesterday morning this beauty. 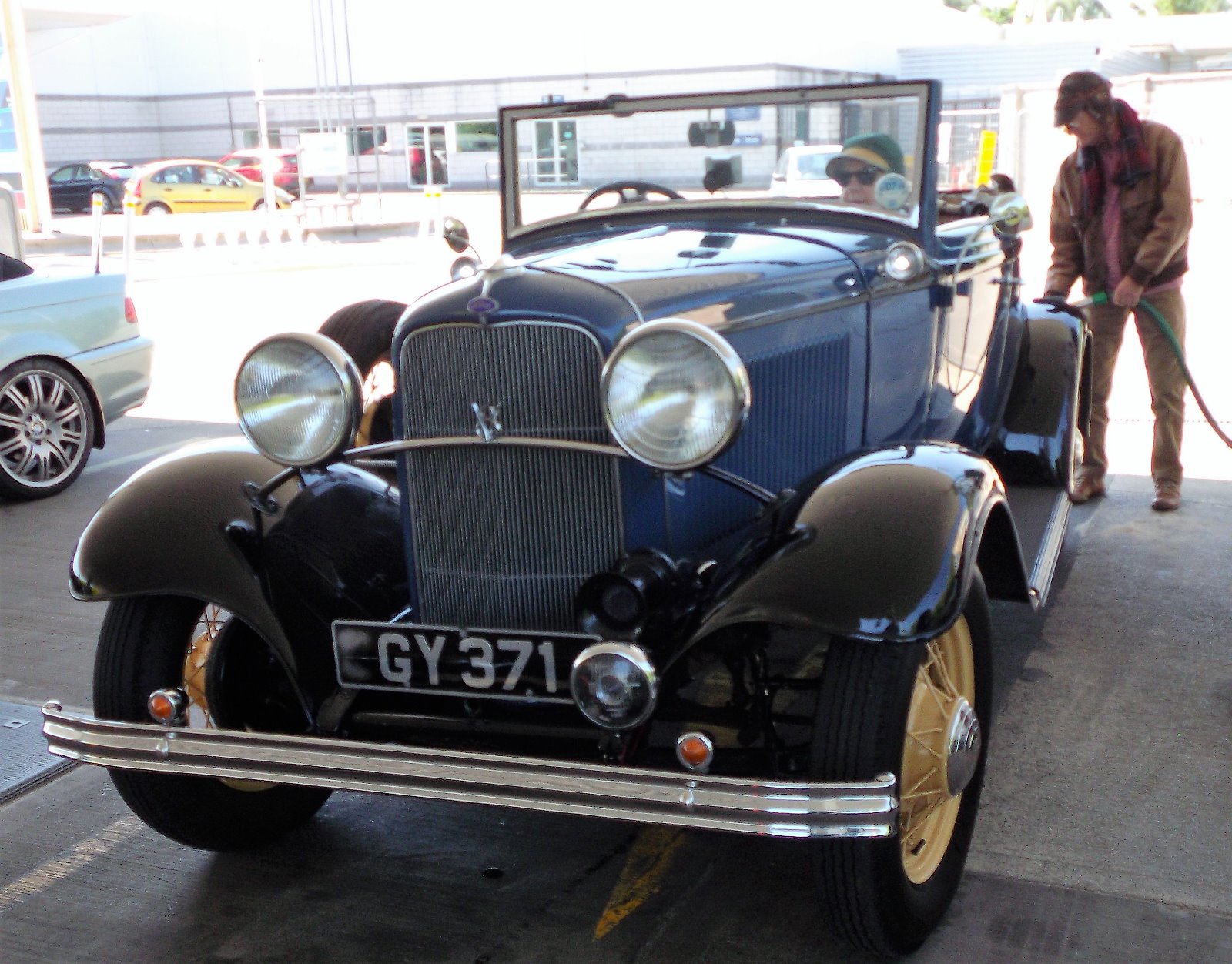