I think my spannering days are well and truly over, as I lay here on my bed, waiting for the paralysis to subside and regain some feeling in my left leg.
And my only job was to replace the droplink !!!!

I'm getting a bit like that Mike, My screen wash has stopped working, went out this morning and checked the fuse, fuse ok, couldn't be bothered to go any further, another job another day when the temperature comes back up a bit.

Screen wash pump is hidden away behind the RH front wing and needs the under wing shield of to get at it, can't even just give it a clout .

The worst of it was I'd unintentionally introduced a clonking fault which left me unable to drive the car to the pre-arranged re-test, then to the bank to pay in some money (hopefully before the next DD puts me in the red and incurs charges).

After the bed-rest I had little choice but to jack the car up again, rotate the wheel and thankfully discovered I'd bent a cable bracket which was catching. Bent it back and had use of the car again!
So here I am, Pass cert in hand, bank balance topped up and car tax renewed.

Having said that, I know I'm going to suffer elevated pains levels over the weekend.
Top

Mike, sorry to hear how things are with you

I understand entirely as for different reasons both my driving and spannering days are more or less over...

I really hope things might improve Mike and you won't be in too much pain this weekend...
Top

Hopefully just a day or two of misery - it will often last a week or more but as long as I can get horizontal as and when needed, I should recover sooner. I rarely venture out on Saturdays anyway.
Top

Woke today not feeling too bad, at least able to get up and move around without too much bother, just the usual aches and soreness more pronounced in muscle areas used most yesterday - right shoulder, arms and hands. I've got a nasty bruise on the inside of my ring finger, presumably from the 19mm spanner.


MikeT wrote: ↑
30 Aug 2017, 20:11
Talking in metaphors, what worn steering/suspension components give the impressoin of walking in high heels and your ankle gives way

, especially when running over raised points like cat's eyes, road markings, potholes? A bit of an exaggeration but that's what comes to mind when I find myself having to counter steer slightly on what should be an otherwise straight and flat bit of road. It's been like this since I've bought it and has passed two MOT's over 15,000 miles. It's not dangerous (that I know of) but does take away from the driving experience.

Meanwhile, I'm pleasantly surprised to find the cause of this complaint may well have been fixed by replacing the droplink yesterday. To and from the MOT station yesterday I thought the steering felt more sure but put it down to placebo - until today. It's definitely improved and obvious I no longer have to make so many micro steering adjustments when driving over undulations and the car even feels better damped on rebound, if that makes sense?

On examination, it's odd that the better protected top joint rubber boot was completely split/cut around it's circumference, still grease inside, but requiring very little force to rotate the ball.. compared to the bottom joint, perfectly serviceable and almost as tight as the new joints that replaced it.

All in all, I've saved £60 and inadvertantly fixed a problem I was convinced lay elsewhere so maybe I'm not wholly done with DIY yet.

Also, due to the steering issue, I was prepared to get the tracking seen to when I get the front tyres fitted. Do any national services offer a cheap or free read-only service? I don't want to pay for the full service to be told everything is within spec or close enough not bother adjusting?
Top

Mike, excellent on all counts

Hope all the soreness soon goes...

i.e. go out and do a bit of a workout

I find a good swim works well for me...
Top

Last time I got alignment checked on a car (turned out to be spot on), the guys at my regular garage told me not to bother about it, so I shoved a tenner into the guy's hand before they could object.

They know they see me pretty regularly, so it pays to keep them sweet - and sometimes saves me a few quid at times like that. Seem to recall they refused to take anything when they swapped the lambda sensor on the Lada too (I couldn't get at it).
Top

Seems I got a different DOMS (Delayed Onset Muscle Spasms) yesterday but it's all good today.

Good to hear all is good today Mike 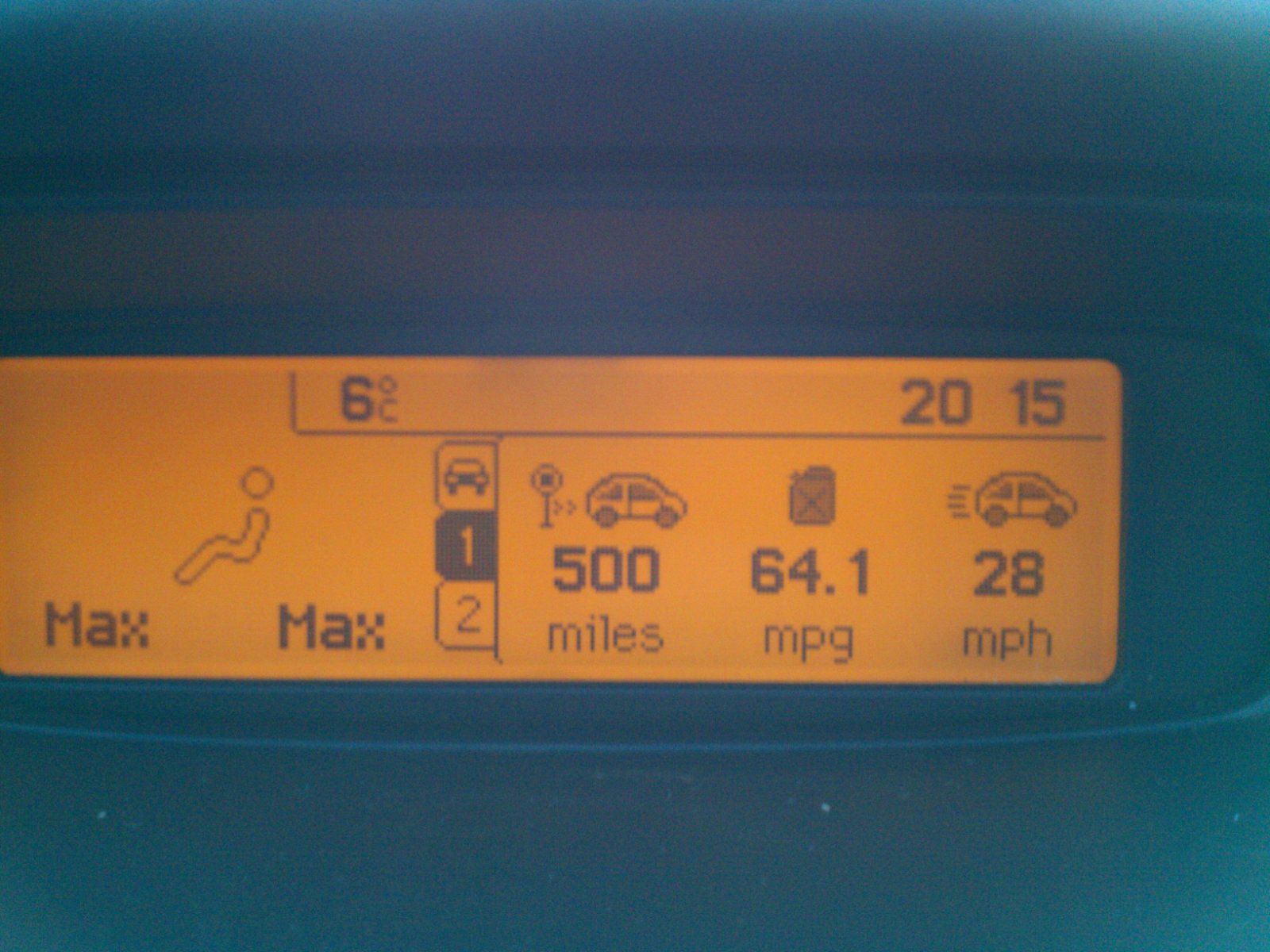 Stone the crows! as my late further would say.

I think you've got the wrong firmware on your display Mike

It should be showing the following:

It should be showing the following:

So THAT is why the third generation C5 reports such a high MPG. It is, after all, known as the X7!
Top

Are you kidding James? 42.8 on an exceptionally good day where I am in Tom Jones' Country in my X7!

I got it off a VW