Can't see why you changed it really. It was good for at least another mile...
Top

Soot - looks like the wrong clip on the EGR valve inlet - it should be an all round clic-loc affair, rather than that screwed up job, suspect that is where the leak is coming from.
MAF - normal - both of mine are like that
Turbo - sounds OK, the new one I put on the C4 was v tight, but there is some play in the 307 (original at 102k)
Vac pump - to get at the filter you need to remove the entire pump - just the long bolt with the ball on the end, and the 10mm one at the other side and it pulls off.
Fuel filter - both of mine are like that, I wonder if some have a water sensor? Getting the heater unit off is fun, isn't it?
Top

Jim, the pollen filter isn't so bad, looks like the leaking air intake served a purpose and hoovered up most of the soot into the air filter.

Thanks Richard. So that's the EGR valve, that long cylinder? I'll take a looksee on service.citroen if it's got the wrong clip. Bad mechanic... (just looked, not egr, but service.citroen doesn't show the clip either. Odd.
Glad to know the MAF's not been messed with!
Although the turbo appears ok, I've still to check it's oil screen and suspect it could benefit a decoke, is that worth doing?
I missed the other vac pump bolt as it distracted me wondering what damper or link was missing! never thought it would be for the pump, talk about not seeing the wood for the trees and Haynes pic's didn't help me there either.
I did wonder water sensor on the fuel filter too.
But I learnt a trick off youtube about removing the heater unit. Just break the catch with a pair of pliers, it's trash anyway. 2-seconds later heater out and pushed into new one. Am considering cutting old filter open to see if there's glitter. Fuel came out clean but I'm still curious what may lurk inside.
So still got to pull sump, strainer and do cambelt, pulleys water pump coolant and injector seat-cutting and resealing with the added tasks of EGR sealing and sourcing covers and fasteners and maybe a new airbox.

As for the oil, (got oil ok message on starting this time) drove up road to flat parking space and checked the oil which was a spit over the max - oops.
Engine sounds really chattery without the undershield off had me worried till it warmed up and even still it sounds less refined than I expected from an HDI. It dhas been chattery since I bought it and with the undershield on but due to work I'd just done I had both front windows down and radio listening intently.
Top

The unit to the right of the clip in your pic is the EGR valve, the long tube is the EGR cooler. You can see the clip here from service.citroen (knicked from a Stickfinger post... 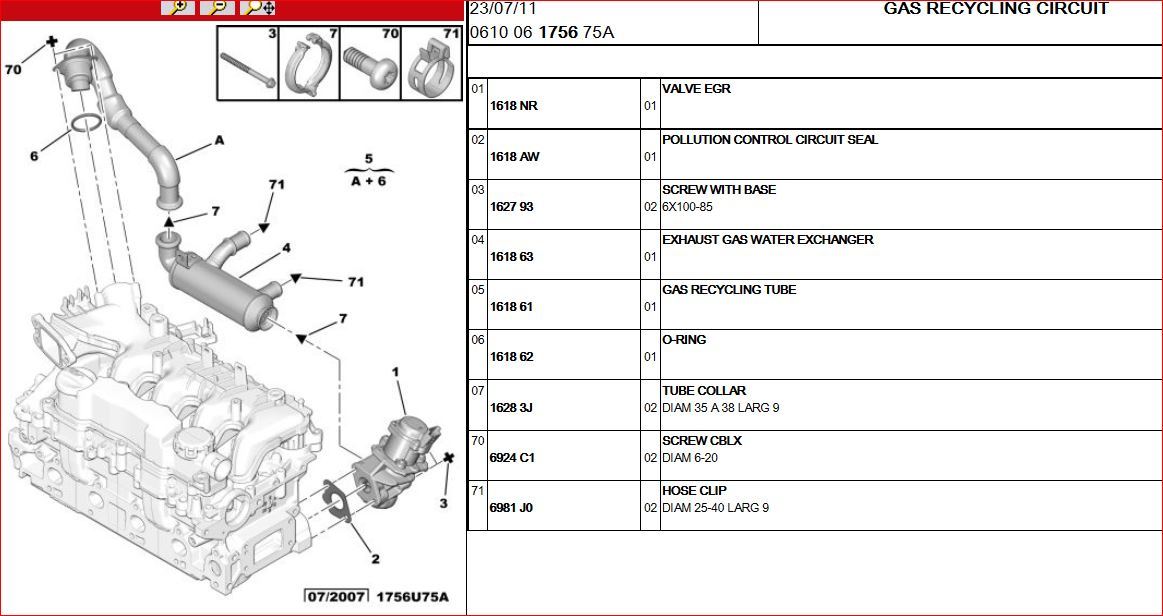 What I don't know is if you can fit the clip without removing the EGR valve....

Hmm, it shouldn't really sound chattery, mine are pretty quiet. I would be a little concerned about lack of oil pressure (is it worse at cold start for a second or two?), or the DMF hinting it's past its best - does it squeak at start up / shut down?
Top

Perhaps just the later ones are clic loc type.... dunno, checked on service.citroen, and they are all shown with the same part number, so perhaps Citroen changed to clic loc type at some point (certainly looks that way in the parts diag above!)????
Top

I guess it's possible the leak was fixed and the evident soot is just historical. Either way, I feel it best to positively ID the leak before worrying about differing clamps.

There is no lack of oil pressure I'm aware of, just the initial low oil issue which I put down to the drain, refill and slope of the road. I'm now getting OIL OK messages on every startup and as reported, on a flat level, the dipstick is showing a smidge over MAX.
It may be placebo, Richard, but I think the chattery noise has now reduced slightly though it definitely is still present. Problem is, this is my first HDI so I have nothing to compare it to and it could be perfectly "normal" for all I know.

While I've got other problems to take care of (injector seals, flatspot/hesitation, possible sticky/coked up turbo vanes etc) I feel I'm just groping in the dark anyway. Is there any cleaning solution I can easily squirt in the engine with minimal spannering?
Top

Cracked the fuel filter open today and again like the air filter, probably the dirtiest I've ever seen in my life which lends itself to my theory that "FSH" means diddly squat. 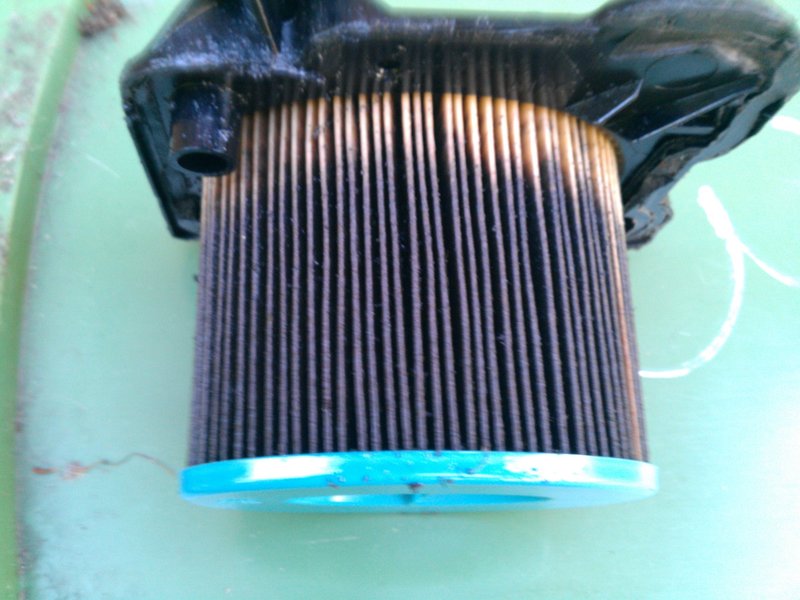 The unit to the right of the clip in your pic is the EGR valve, the long tube is the EGR cooler. You can see the clip here from service.citroen (knicked from a Stickfinger post...

What I don't know is if you can fit the clip without removing the EGR valve....

Did a bit more digging on this EGR Richard and I think it warrants removing for a clean and refit. Citroen Service says that the seal (No2 in the diagram) should be renewed and there's anecodotal evidence of people finding it tricky to get the two EGR mounting bolts (No3?) in place so perhaps that's the cause, assuming someone has previously disturbed it. As expected, online pics show these valves (and presumably the relevant air circuit in general) gets gunked up pretty quickly and even moreso if wrong oil or overdue oil changes are the norm.

It also ties in to the other discoveries I mention here http://www.frenchcarforum.co.uk/forum/v ... 08#p456107" onclick="window.open(this.href);return false; regarding the Air Circuit Parameters I'm seeing.
Top

Silly question time again - is my car fly-by-wire? ie, if I want to spray intake cleaner into a running engine, do I need an assistant to keep the revs up? Although I haven't specifically looked, I didn't see any obviousy way of controlling the throttle from the engine bay.
Top

Ok, how about an easier question then?

I noticed in the glare of a following car's headlights last night that with enough throttle, I can see a haze of exhaust emissions. It's not dark and sooty like my xantia, more like a fog colour. Is this normal?
Top

Got into a little tussle last night with a Ford Focus. As we merged, his rear n/s wing bumped my o/s front wing.

Young lad who was flapping about costs and has offered to settle privately (if affordable to him). He's also informed me that if it does go through insurance, he'll "fight" it as he realised this morning it's a lane merge incident - cheeky monkey. 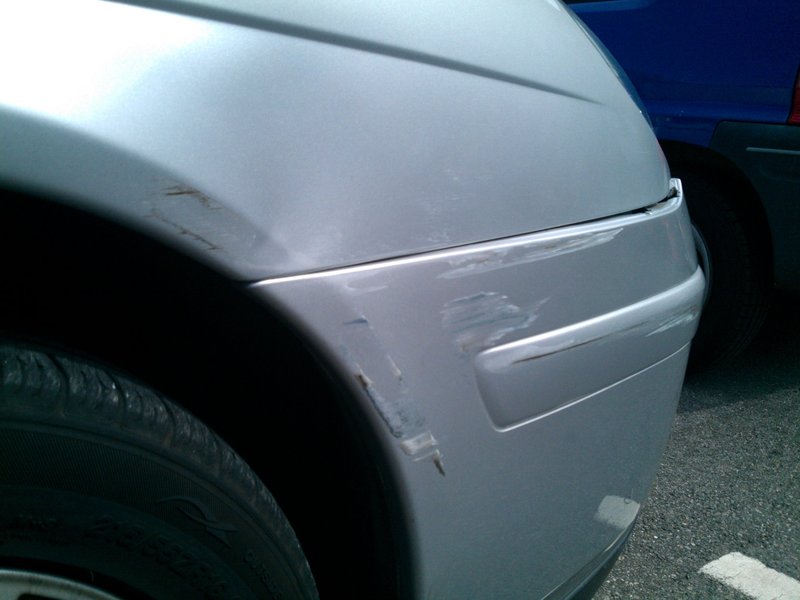 Let him sort it, and remind the cheeky little fecker that even a "like for like" will cripple his insurance costs, no need for expensive on that, one of the mobile "bump away" services would be best......looks like a bumper clip and a little paint.

Or ask for the cash and use touch up paint, use the cash to take the missis out for the night, easy bonus points and worth a little battle damage.