as for turbo vacuum pipes you could use light braided fuel line just keep it away from hot spots, the original vacuum hose on the mk1 are I think ABS pipe with rubber vacuum hose on the ends when you checked your turbo did you check for in out movement on the shaft as in along its length.
Top

Yes, I pulled and pushed in and out and I can feel no give at all whereas I understand there should be some sideways movement as the bearing has to float in the oil, but it's very difficult to detect it, unlike my previous xantia.
Top

Hi Mike less is best when it comes to shaft movement in a turbo, so it sounds like your turbo is still spot on I got a turbo myself this morning off a mate, its out of a scudo but they look the same apart from the activator dump valve so I think if I swap parts I can make a good one fingers crossed

. Have you any airflow codes.
Top

Good luck with your replacement turbo.

Do you mean fault codes relating to airflow? No, only once when i apparently failed to fully reconnect the MAF did I get 2x temp and 1x perm fault codes along with anti-pollution message but I cleared them, firmly pushed the connector home and they've never re-appeared. I've also monitored the live parameters many times and can see the turbo reacts pretty much in line with commanded values (as does the EGR). If there is a small vacuum leak in my system, it's very slight, intermittent and hard (if not impossible) to detect with the lexia. It can be tested for leaks with a gauge but I don't have one, nor a vacuum pump.

Oddly enough, it didn't flatspot or hesitate once yesterday (~30-miles).
I've also started another bottle of Miller's and will see if that helps further.
Economy over the last four partial refills is still keeping it's head just above 60mpg whereas the previous overall average has been just over 55mpg.
Top

Well that means for now you can rule out MAF, I know its a bit of a weird one but how good is your coolant because a bad engine coolant temperature sensor reading caused by bad coolant can cause weird gremlins. After that I would look at a failing crank, cam, or O2 sensor. the sensors can cause incomplete burn if they are failing because timing response is incorrect.have ever had difficulty starting. I would be wary of burning snake oils every tankful.
Top

Darren, I've had no cause to suspect those other sensors, especially the MAF but will keep an eye out for signs of failure, and I'm pretty sure I (diesel) don't have an O2 sensor but happy to be shown different.

As for snake oils, this one does appear to show beneficial results so far and diesels need as much help as they can get eliminating soot from air intake passages and components.

EGR's appear to be the main suspect of hesitation/flatspots in diesels due to soot contamination and my engine also has an EGR throttle though I don't believe it's directly in the exhaust flow like the EGR itself. Both show to be working as expected in live data monitoring.

And of course, I got kicked yesterday for posting there was no hesitation the day before, as last night's (slow, congested traffic) drive brought back the hesitations

MikeT wrote: ↑
17 Jul 2017, 15:50
Popped into Citroen's to see if I could get the missing sundries - they don't sell the rubber grommets, only a replacement brackets with pre-fitted grommets for £12.63+dreaded. Also, the MAF bolts (of which three secure the MAF) are sold at £2.45ea+dreaded in a pack of four!

Off to the bay of E for grommets (1422A3). Anyone got part number for MAF bolts, I can't find it on Service.Citroen (what section is it?).

ETA - scratch that, found it. They call it the Inj Calculator Sensor. Also, it states the fasteners are screws (no73) whereas mine has bolts and looks suspiciously like no74. 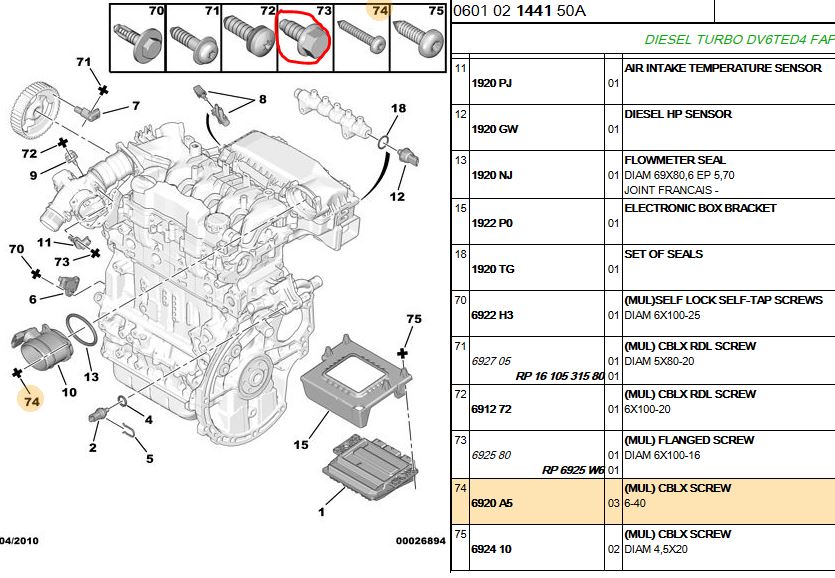 Spurred on by the economy improvements I decided to revisit the air box and the problem the cold air intake has staying connected to it, allowing warm air (and previous exhaust leak) into the air filter.

Thankfully, it was dead simple to swap the rubber grommets from the new bracket to the one on my car. Now the airbox is properly secured and sitting higher up I was hoping the cold feed pipe wouldn't detach so readily but sadly it's not the case as it's been "remoulded" over time to pull itself out at the slightest vibration

I'm sad because a new pipe is over £50 so the only option is to come up with a secure bodge. Gaffa tape perhaps?

Hi Mike,
some diesels have O2 sensors, not all it was just a thought

, :idea:speaking of soot and snake oils are yours Denso type injectors because there is speculation that running small amounts of 2 stroke through each tank aids in the lubrication specifically Denso injectors stick caused by the new high ethanol diesels reducing ash and increasing mpg etc. . Its a pain when your repairs end up as needing other parts especially when its something you expect to out live the car. Food for thought if nothing else. I hope you get it sorted soon.

My injectors are Bosch and you won't convince my to add engine oil to my fuel tank.

Maybe there is a small vacuum leak to the turbo. It's odd how varied the hesitation problem is. Since using Miller's it's been mostly absent but can range from a slight hiccup to quite a concerning brake when trying to pull out quickly - a bit like trying begin to to tow a car at the point you take up the slack.

Talking in metaphors, what worn steering/suspension components give the impressoin of walking in high heels and your ankle gives way

, especially when running over raised points like cat's eyes, road markings, potholes? A bit of an exaggeration but that's what comes to mind when I find myself having to counter steer slightly on what should be an otherwise straight and flat bit of road. It's been like this since I've bought it and has passed two MOT's over 15,000 miles. It's not dangerous (that I know of) but does take away from the driving experience.
Top

That suggests the suspension might be riding a bit high.
Top

Interesting as my ride height is already suspected as a possible cause of another niggle so it's on the cards to be checked.
Top

. If there is no knocking from suspension i would tend to agree with hell razor ride height, If there is knocking kind of a slapping combined with a side slip would suggest control arms but any bushing that has failed will add to sway Mike. the lag is a funny one mine done something similar and it was MAF but you have no faults.
Top

Not much to report as the car is giving sterling service still. On my second bottle of Millers and the flatspot/hesitation is largely still kept at bay.
The cold air intake gaffa tape is holding well (saved me £50+), but it's interesting to note the MAF (which is located after the air filter) still shows a higher air temperature than the manifold air temperature (which reads from the double butterfly, post-turbo) by a couple of degrees C. This infers the IC is not only cooling the heated compressed air effectively but also removing whatever extra heat absorbtion is occuring pre-turbo between the cold air intake and the air filter.
I was monitoring/recording the Particulate Filter parameters as another regen was due which I was pleased to note has yet again increased the average distance between regens.
All in all, the DPF is now presumably much cleaner than when I bought the car and not getting sooted up as much as before.
Top

MikeT wrote: ↑
18 Dec 2015, 12:57
My OS dipped beam failed last night. Handbook says to use anti-UV types but am thinking of upgrading and wonder if Halford's own 50% brighter (BOGOFF for £20) are suitable, anyone know?

It failed again tonight.
And the OS sidelight LED has started flickering, just like the NS did before the MOT earlier this year. (LED's flickering is there a clue there somewhere?)
What is it with these cars and their appetite for lights, not to mention the flicker when the hydraulic pump kicks in?
Top

Mike, check your earths, especially your battery to bodyshell earth.

My 207 used to have an unhealthy appetite for bulbs but since I found the bad bodyshell earth connection I've lost no bulbs since...
Top
Messages: 509