I remember getting a lift home from the depths of somewhere near Whetherby, when our bus broke down in a friend's SAAB 99.

After a few hours on a freezing bus, it was a good journey home, and I remember the comforting glow from the instrument display which I recall as being orange and green. 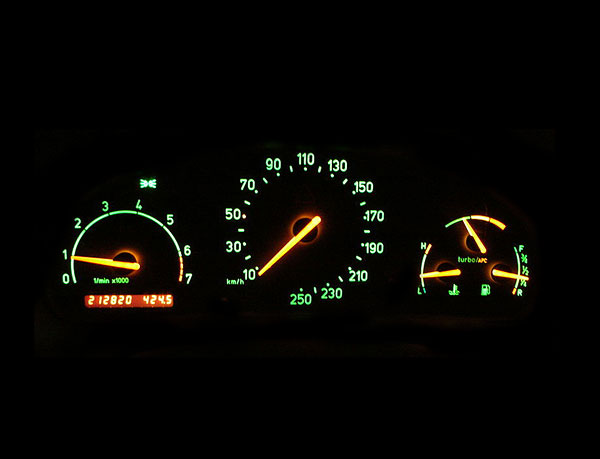 Talking about the driving position on a SAAB, this comes from the nice 2-tone thread but you can't beat a horizontal steering wheel 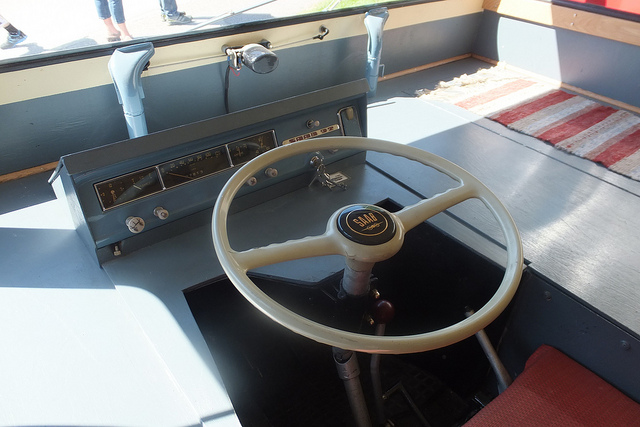 Can tell you that instrument panel is from a 9000.

900 has all the warning lights right at the top of the panel deliberately so they are as close to your eye line so likely as possible to be noticed. Plus must be about the clearest bit of instrumentation ever devised.

If picking something with a horizontal wheel, my pick is either a Bedford YNT with a Duple Dominant II body or a Volvo B58 wearing a Plaxton Supreme IV body.

At a strech I'll take a Leyland Olympian with Alexander RH bodywork...but only if it has a Cummins L10 engine and the associated thunderous exhaust note...

One of which I will own one day...
Top

One coach firm I worked at had a Bedford and a volvo b 58 both with horizontal wheels. Also an ancient Ford with a duple body that I managed to get for the school run as i was the only driver that could get any gears in it. I had to pick up a girl at the bottom of a hill, 1st to 2nd was ok, but getting 3rd was a lottery. And if you missed it on the hill had to stop, handbrake on and start again. My worst was 4th start to get going although company worst was 6. I loved the old Leylands with the semi auto. When they were as old and knackered as the one we had at stagecoach in Macduff never lifted the accelerator to change gear. It was the fastest bus in the fleet though, and we had 8 spanking new volvo b10m on joncheere bodies then. That would have been in 1999 when I started on the buses. They were consecutive numbers S655JSE to S662JSE.

Knew them well, was around 2002-3 I commuted into Aberdeen on the 305 from Fyvie. They were comfy buses, far more so than the Premieres they replaced in which the headrests seemed to be about six inches too far forward.

Remember that the ZF box the Jonkheeres had used to make a really peculiar warbling/whistling noise at around 50mph that I have never encountered on any other vehicle to this day.
Top

ZF autoboxes can be very musical Zel, especially when they are on the verge of throwing in the towel

I know they can, and these made all the usual noises, just in addition to that really odd sound. All of the Jonkheeres on that route did it though, so I don't think it was a fault.

Still reckon the best bus moment I've had was heading out of Dundee up the hill towards Aberdeen behind the wheel of a Bristol RE based coach (think it was an ECW body of some description) with what I believe was the largest engine they came with from the factory and a semi auto box. Recall coming up behind a National Express coach with one of the "dumb" speed based auto boxes without any kickdown facility crawling up there, and just had a moment of "Here's something you can't do" and dropped a couple of gears and went sailing past him. Pausing of course when level to wave. If looks could kill, I'd have been toast on the spot from the glare I got!

Remember being on the other side of that when one of Bluebird's pair of Scania K113 based Alexander PS's sailed past me on the A96 when I was doing 70mph as though I was standing still. Was a passenger on one of them once, and remember thinking that they were incredibly quick, sounded good too (especially when sitting on the back seat flat out down the dual carriageway).

That old beast could shift, it was massively over-engined and would easily peg the speedo against the stop (on a private test track of course). Lovely old beast to drive, though you really, really had to watch your speed. Especially as the brakes were several orders of magnitude less effective than the power unit.

I know the old Bedford Y series weren't great. They're underpowered, have a gearchange that's like stirring a bucket of lumpy custard (not as bad as Fords of the same era mind you), and generally don't ride great...I just find that I like them to drive though. Not sure why, I just do. Know the Volvo B58/B10 are far better from a technical standpoint, they just never seem to capture my interest as much. Plus the Bedford instrument cluster was a real demonstration in how to do something properly from a design perspective rather than the seemingly random scattering of gauges and through hole warning lights you usually got back then.

Really need to get a proper shot of a National at some point, as have only had a very brief shot of one putting it out on display for a show on a couple of occasions. Likewise an old Daimler CVG6, would love a shot of that on the road. The Albion mind you, that I would not really want to spend any time driving in the real world. Six tonnes, about 50bhp when all four cylinders decide to join the party when you've managed to get the manual mixture and ignition advance/retard controls where it wants it for that three nanosecond period of time, a four speed crash box with far too widely spaced ratios, near zero visibility, steering that you basically have to brace yourself against the bulkhead to turn, has about 1/4 of a turn of free play in it, and brakes which only exist in the mind of the madman who designed it (emergency stop from about 10mph is about 200 yards). Oh, and it tries to asphyxiate you and cook you at the same time, and the pedals are in the wrong places as well just to add to the fun. That's if you've managed to avoid getting your arm broken while trying to start it anyway. Commercial vehicles were a bit of a handful in 1929! Glad to have had a shot of it, but goodness I wouldn't want to drive it on a public road! My mate Davie has my total respect for being able to take that beast by the scruff of the neck and make it behave for the few hour or so long drives I've been a passenger for, and taking it totally in his stride.
Top

The most beautiful sounding engine that I have heard is a Bollinder engine on a narrow boat. It has a very slow RPM, making a sound sort of like a muted bell. It drive modern marine engineers nuts (well, those who don't know about it), as it only fires when it needs to, producing a irregular noise (which has those who don't know it looking for the fault; there isn't one). You will know if there is something on the prop, as the engine will be working harder, so firing much more than normal. There aren't many left.
Top

A few old stationary engines of long ago did that James, fire only when they felt the need..

They do indeed sound very lovely... A kind of restful sound

You tube usually comes up with the goods!

What are the chances of finding this little gem from you tube to link in seamlessly with the original topic!

How does it "know" when to fire? I imagine there's a centrifugal wotsit that triggers something?

Lovely sounds, aren't they? The first clip is a 'Tug and Butty' combination. When narrow boats first had engines fitted they could lose 10' of cargo space (for the engine room and related equipment), which meant a loss in profits. However, as the engines were a lot more powerful than pack horses (9HP!), you could then tow several butties and charge them a fee for the privilege. They also could work for far longer, and, when you came across a flight of locks, there would be more people to help work the boats through.
Top

Audi_Mike wrote:How does it "know" when to fire? I imagine there's a centrifugal wotsit that triggers something?

I have no idea, but it does!
Top

First time I went to Sweden we went to their summer home on an island called Käringön. The village was mainly a fishing village and I was amazed at the sound the boats made, a very slow running diesel that produce a smoke ring on every stroke.
Similar to this but without the 'ringing' sound caused by the bodged chimney and slower. Around 1Hz at idle.

Audi_Mike wrote:How does it "know" when to fire? I imagine there's a centrifugal wotsit that triggers something?

I have no idea, but it does!

Mike, you're on the money actually... Yes it does, it's all done with governor. You should hear the big stationary version. They idle and rest like a little lamb and then when they're called on to do some work they snarl

The saddest thing I once saw was a row of vintage stationary engines at a show idling away and doing no useful work.. They sounded sad...
Top
Messages: 34