Well I can pretty safely say that when the plugs were last changed, they were tightened up by either Thor, Hercules or a combination effort between the pair of them.

Tried again to get them out today after a good twenty minute 70mph blast down the M1 and back, and still no chance they're coming out - my socket wrench was bending with the torque being applied...will pick up some plus gas tomorrow and start a regular dosing and see if over a bit of time if it seeps in enough to do something. Just really hope they aren't cross threaded as that would let me in for a world of pain...

Also, don't accidentally punch the vacuum advance unit when pulling the HT lead of plug number 1, it hurts if you do and it's astonishing how much blood you can get from such a tiny injury...

Also also, found two more coolant leaks, tiny ones and just because of those horrid old hose clips, so no biggie...I need to stop putting it off and just make an afternoon of changing all those soon.

Regarding the emission result, poking around today (based on some of my old notes I found from my previous Riva) has lead me to believe that the car might not even be running in closed loop mode at all...hmm...next question is why of course!
Top

Tesla hasn't been sticking his nose in to help you, has he?
Top

Those plugs are biblically tight Zel.... Trouble is, you don't want to go at it too hard and snap one of them....

I'd say use a long breaker bar but the risk is significant unless you have a good spare head...

Do you have a MAPP gas kit? If so, I'd suggest next time you start off cold and heat the head around the plug so that the head expands and the plug doesn't. Maybe that'll just provide enough differential expansion to get them started...
Top

Especially careful as the plugs in there are the ones with the tiny bolt head on them, rather than the big ones like it should have...

Reckon you're on to the best approach there Jim.
Top

Have been pretty busy this week, but ended up with an hour to kill yesterday (I think it was yesterday...) so finally got around to swapping the tail light clusters over on the Riva. 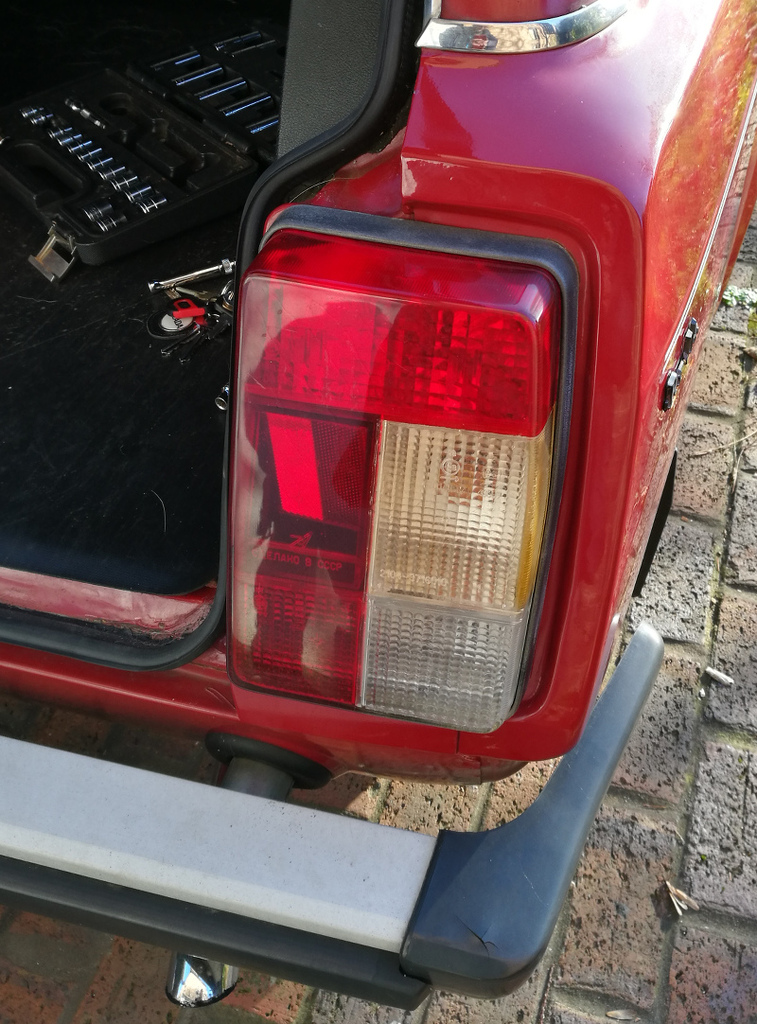 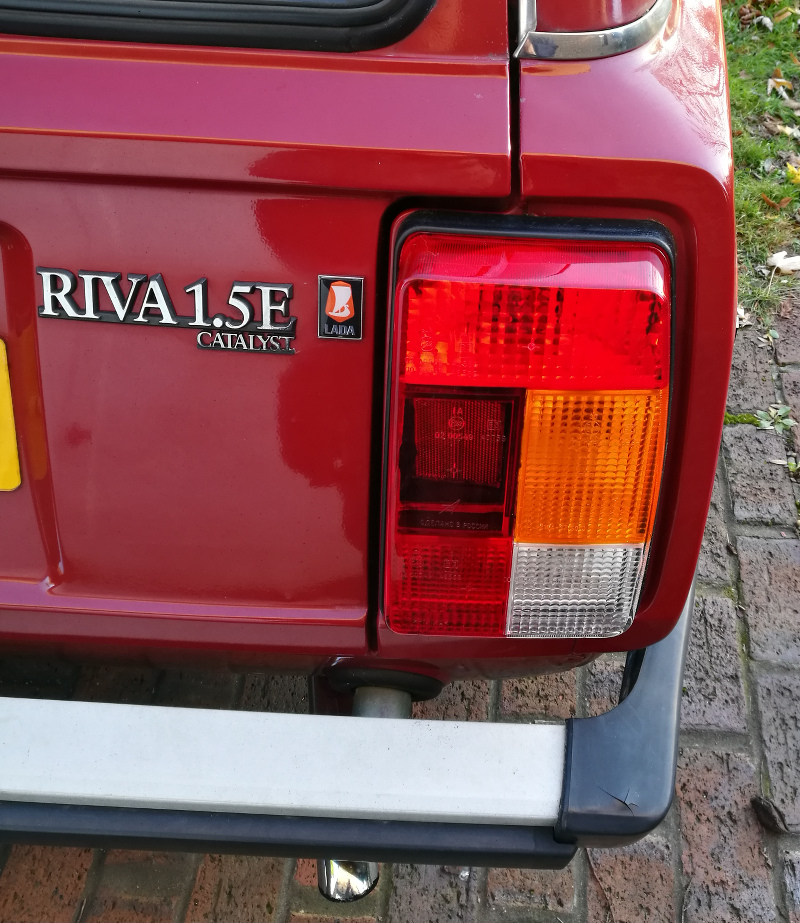 Looks a bit better I think, I didn't have space to get a wider angle shot because of how close I'd backed up to the garage!
Top

I agree. The colours look far sharper on the new cluster.
Top

Today I mostly...removed the entire fuel injection system from a Lada Niva 1.7i, labeled everything and stuck all the assorted bits into zip lock bags (also labeled) - except the fuel lines as they wouldn't fit.

Will need to source a crankshaft position sensor (somebody had already nabbed it) and lambda sensor (no way it was budging, could only get a small spanner on it as it's buried in the V of the manifold on the Niva), but have everything else.

Only wire on the injection harness that was cut was for the speed sensor as that won't be used (or will be adapted to run from the speedo cable) as it's taken from the transfer box on the Niva - which isn't there on the Riva! ...I decided that based on that that I couldn't be bothered crawling around in the mud to extract it!

Only cut four wires on the vehicle harness which will be power feeds for the fuel pump relays and one will be the check engine light most likely, should be easy enough to track with the wiring diagrams. I'll be needing to wire in an auxiliary fuse box for this anyway so no big problem.

Will put up some photos of the mayhem tomorrow.
Top

Just pondering the though of a 4wd Riva using the Niva bits! Looking forward to the updates about fuel injecting it. Had a Niva Cossack many moons ago with a Mirafiori twin under the bonnet which was brilliant off road, and had the most fantastic heater. I wish I could of kept it, but was rusting away quicker than it could be stitched back together.
Top

Looking forward to reading all about it

Here's the bits scavenged from the Niva a couple of days back, save for the engine bay fuel lines which are already in the boot. 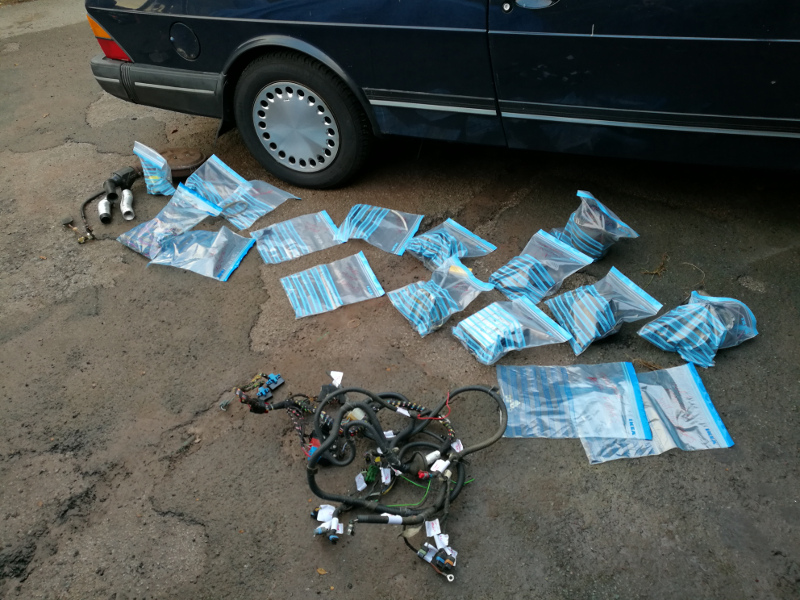 Had to eat a bit of humble pie with regards to my erratic idle on the Riva...It's generally run fine aside from at idle tending to then run on anything between two and three cylinders, and only just managing to squeeze through the emission test a few days ago.

Here's a quick video showing how she was behaving at idle:

I'm no stranger to the fact that the emission control on these cars is hyper-sensitive to even the tiniest of vacuum leaks, and had been treating it accordingly. The one bit of advice I had been given though was to change one pipe - the one between the inlet manifold and brake servo, as they almost always prove to be leaky. Now, I'd thoroughly checked for leaks around that area using carb cleaner, but didn't detect any...Getting at one of the hose clips to get said hose off was obviously going to be a royal pain, so I didn't want to disturb it if I didn't *really* have to.

However, I'd been starting to get to the stage where I was running out of other options, and the hose was there in front of me...so I decided to do it anyway. As expected, getting the hose clip off took me half an hour and several bleeding knuckles, but I got there in the end.

New hose on, clips tightened up and...Well...Here's the footage.

So there must have been a tiny leak in that hose...Most likely around the manifold end hose clip I reckon (I re-terminated the other end)...Just enough to upset things. The theory is that the tiny amount extra air getting in there results in cylinders three and four running lean, which of course upsets the lambda reading, dumping more fuel in, and resulting in one and two then running rich. Based on what I saw, that behaviour seems to be pretty accurate.

So next time someone who knows a marque tells you "before you waste time messing around with stuff, change this bit!" - don't try to be smart, just do as they tell you already...or it will probably come back to bite you (or make you look a fool) a little while down the line!
Top

I was staggered on Friday just how well the Lada now idles... It's virtually perfect and no longer smelly!

You really have done a most excellent job! I love that Lada to bits... So good to see it being so well loved and made to be like new

Just made a discovery regarding the crankshaft position sensor. Firstly, it definitely needs to be there for any injection system stuff to work as it's where it pulls all the references from with regards to engine rpm etc too.

Will stick a link to the injection system manuals later Jim, they are some of the best and most informative bits of literature I've come across in a long while. Reckon you would enjoy having a read.
Top

Not sure whether you've managed to get those tight plugs out, or not.
Did once really struggle with such, and applied so much unscrewing torque that it actually sheared the plug hex body away from its long thread. Looked alarming, but interestingly it was the hex head that was impossibly tight on the cylinder head seat, and not the thread, which unscrewed easily when a bolt extractor (or file spike, I forget which) was inserted into it.
Top
Messages: 4847