Had a play around with the diagnostic centre.

Aside from changing a couple of lamps and repairing the mains cord (i.e. chopping the last foot at the plug end off where it was mangled and re-making the connection to the plug) I've not had to do any repair work.

With use it's just slowly coming back to life. Need to get some Servisol or similar to give some of the switches a going over with as quite a few are quite touchy, otherwise though it seems happy enough.

Took me a long while to figure out that for the scope to do anything it needs the coil SW and CB clips to be attached as it seems to trigger on the coil pulse and blank the display if it's just free running (irrespective of if you're using a mode that doesn't look at the ignition system). Would be nice if the manual stated that as it wasted me about half an hour.

So here we have a trace across the coil from the Skoda when running... 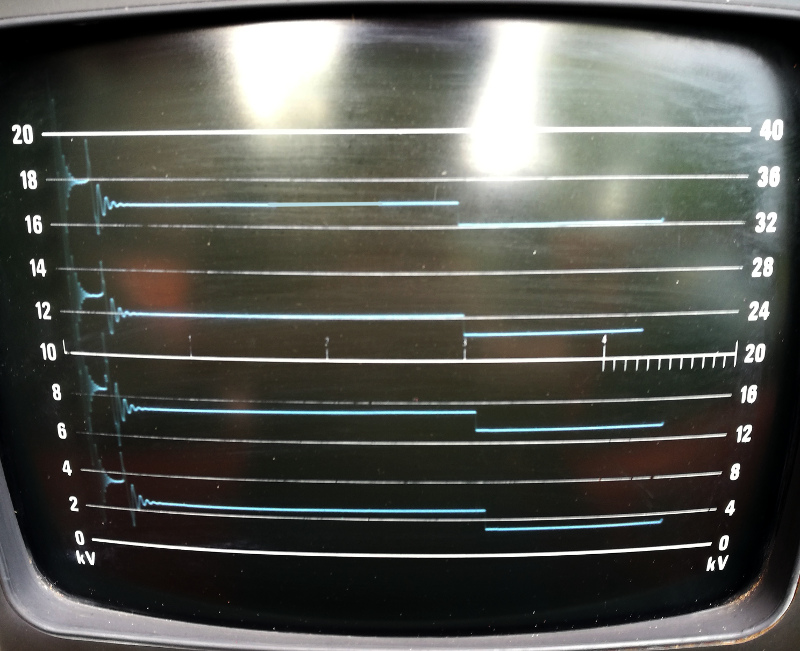 I've touched a couple of things in there digitally as the sweep rate is quite low so it's really hard to get a decent photo!

The alternator charging trace (think this was the Saab actually). 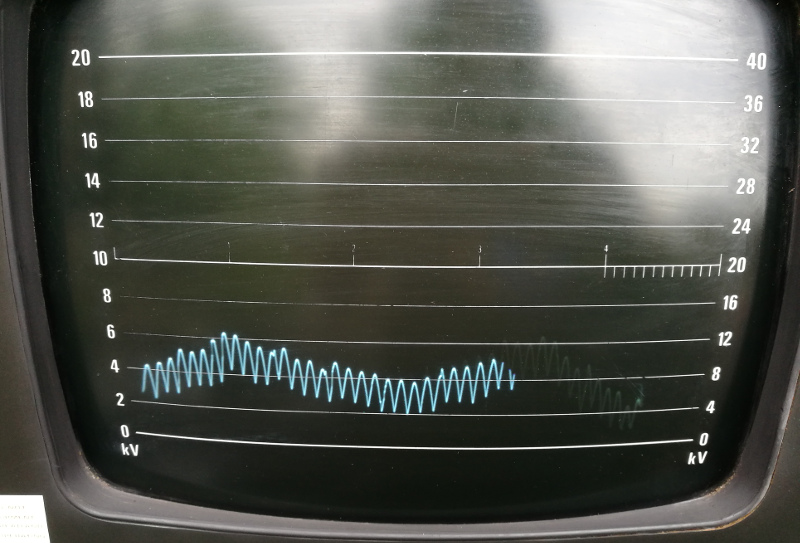 Finally for now some of the more basic functionality - the current battery voltage and engine speed - interesting how the RPM display jumps between ranges (shown by the lit arrow) to give the best resolution. The 1200rpm idle is actually about right for the Saab as it's an old school automatic that doesn't have any idle compensation - so it drops to 950-1000 rpm once you put it into gear. Took me a while to work out what was going on with the ranging as several of those lamps were blown when I first got it! 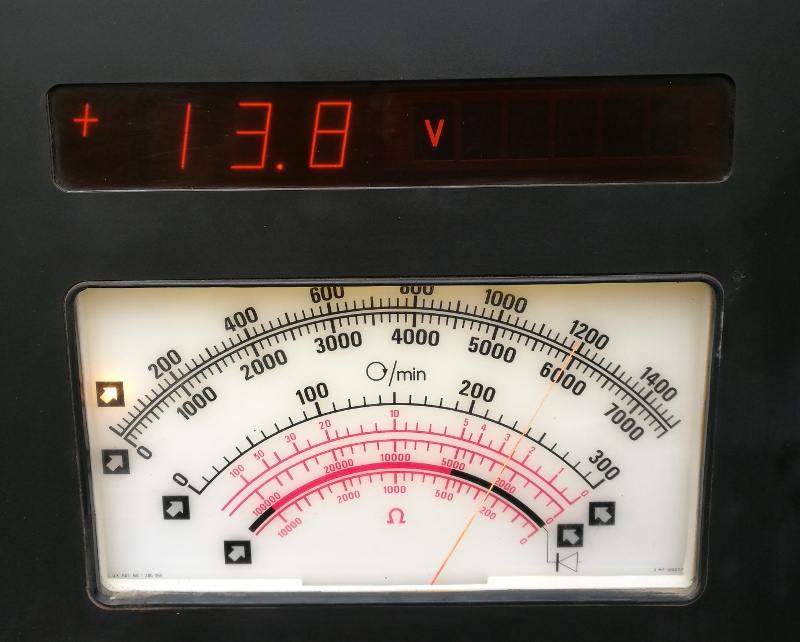 The digital display (nice bright Sperry Panaplax neon display - finally have a bit of that tech in the collection, it was one I've been missing for ages!) also shows RPM in a number of modes (albeit in x10/rpm rather than x1000 or x100 so it takes a while to get your head around initially), which was quite handy for setting the idle speed on the Skoda back to something sensible.

Fun toy to have in the garage that's for certain...
Top

That's a real cracker of a toy Zel

Recently I've passed the old Crypton Factory in Bridgewater, Somerset but they seem to be no longer there... Still in business, just moved to Birmingham according o their website...
Top

Nice that they're still both in business and in the country at least! Shame they've moved though, reduces the odds of interesting or useful things to be gathering dust at the back of a store room...(such as...I don't know, the CO meter unit fo this).

Really need to put up some photos of the innards of the thing - proper 80s industrial design.

At first glance at least it appears to do everything (save for driving the digital display and lamp switching) in the analogue domain rather than having a micro driving the show. Know there's an upmarket version of this with two CRTs that used a basic 8-bit computer to provide some (at the time) fancy graphs and such on the second display, left display was very similar to this I think though just displaying vector graphics, can't remember if it was also driven by the micro though...was a long time ago I looked at it!
Top

Looking forward to seeing the innards of the machine Zel

Just my kind of stuff!
Top

Found a handful of photos from when we were first checking it over that I'd forgotten about on my phone.

Got to love industrial equipment that's designed to be serviced - there's one huge bolt with a 10mm hex head on the back that when unscrewed just allows the whole chassis to slide out on rails (and then locks there to prevent any surprises). It's actually only about half way out in this photo. 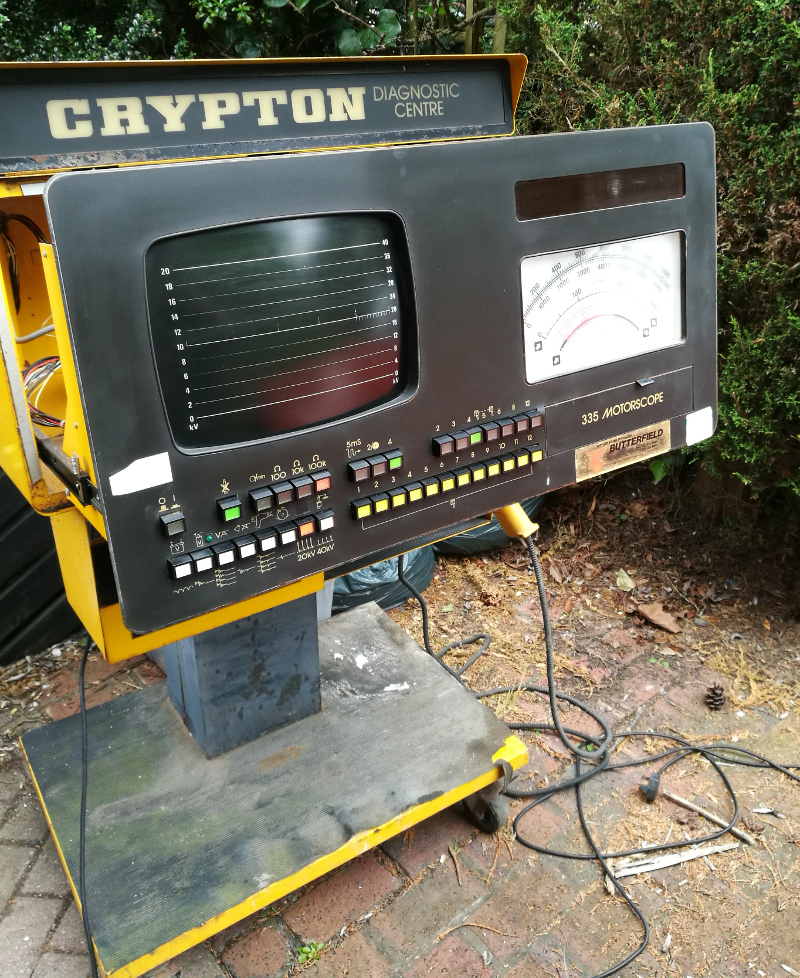 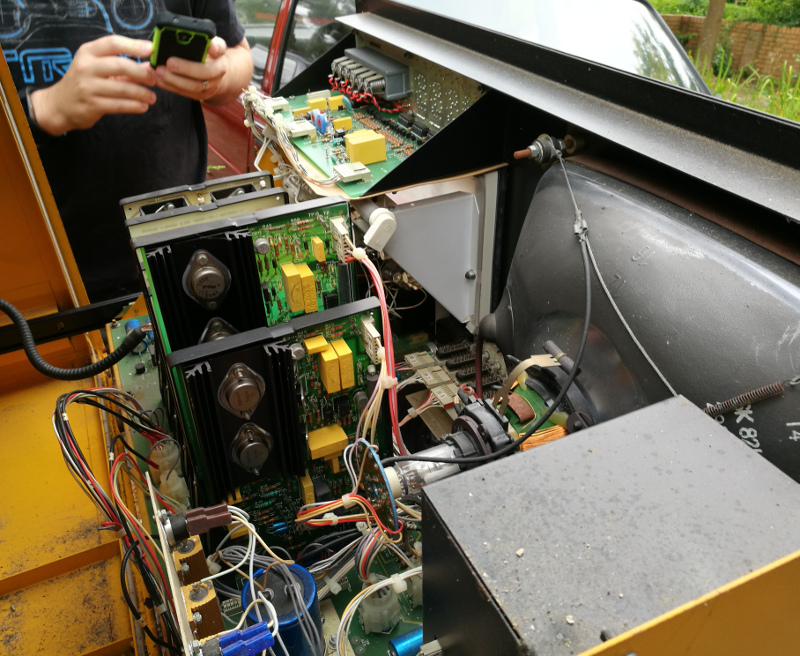 No prizes for guessing where the CO meter attachment plugs in... 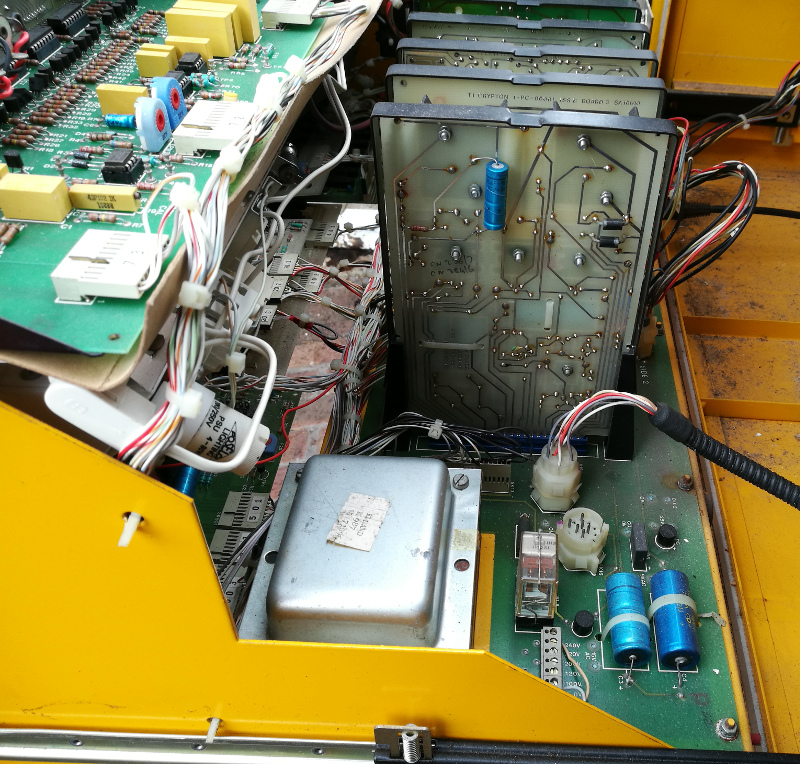 One of the disadvantages of using a Panaplax digital display - look at the small army of support components needed to drive it! 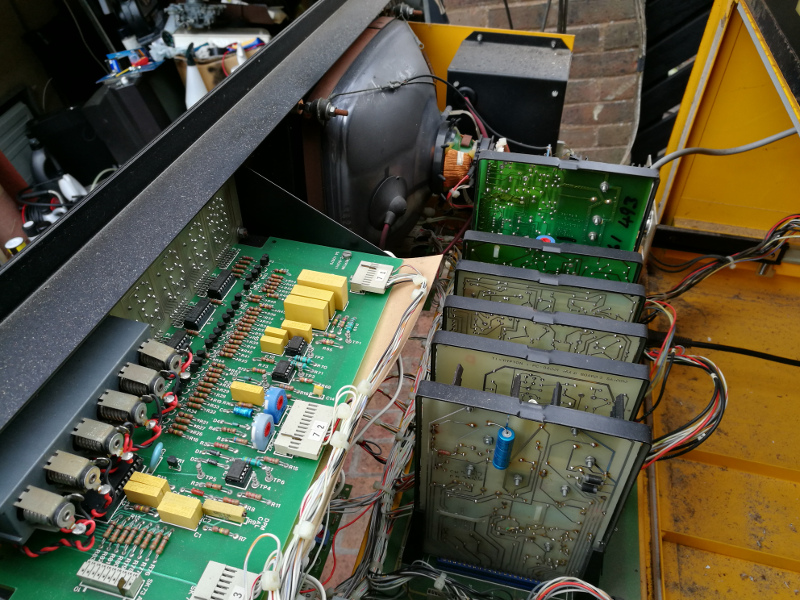 No custom ASICs or FPGA nonsense in here! Everything I've found so far is everyday off-the-shelf stuff that you'd have been able to find in the likes of RS catalogues back in the day. Must have cost a pretty penny when it was new this thing.

...Never mind the rest of it, that many flipdot switches must have cost a pretty penny if they were as expensive back then as they are now! I was planning to use them for the range switching on a benchtop power supply I was making for a college project back in 2006, I abruptly changed my mind when I found how expensive they were.
Top

Beautifully made by the looks of it!

What's the purpose of what looks like a fluorescent light starter in the third picture?
Top

Definitely a case of being made up to a standard rather than down to a price.

It is a fluorescent lamp starter, Jim. There's a little 8W tube that provides backlighting for the meter scale.
Top

No compromise on the backlighting then Zel

what an excellent way to light it up!
Top

The backlighting does actually work pretty well - even with the positively nasty unbranded tube in it that I found (literally) rolling around the garage floor to replace the dead one that was in there when I got it. It'll get a decent triphosphor 4000K one thrown at it eventually when I find one which will probably near as makes no odds double the output.

The tube is more easily visible if you look a bit closer. 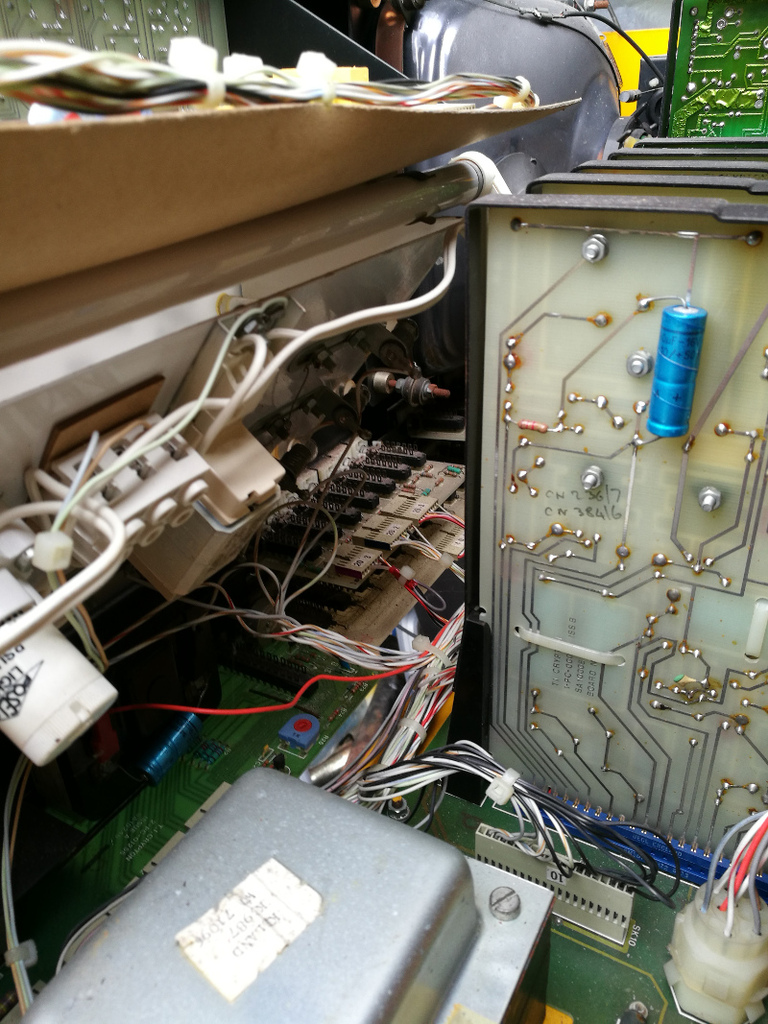 The little incandescent lamps you can see at the edges light up the arrows on the scale through light pipes.

The sign up top is also fluorescent lit (and comes on as soon as the mains supply is applied, obviously wanting to draw attention to the machine in the back of the workshop - suffice to say it will be lit as soon as the sockets are turned on once I have the garage set up properly!). Lamp in there given the September 1981 date code appears to be the original Osram-GEC made one, which given its maker unsurprisingly looks brand new. Well, it did once I removed the thick film of grime from it which was blocking at least half the light output! Also replaced the starter which was strangely missing. 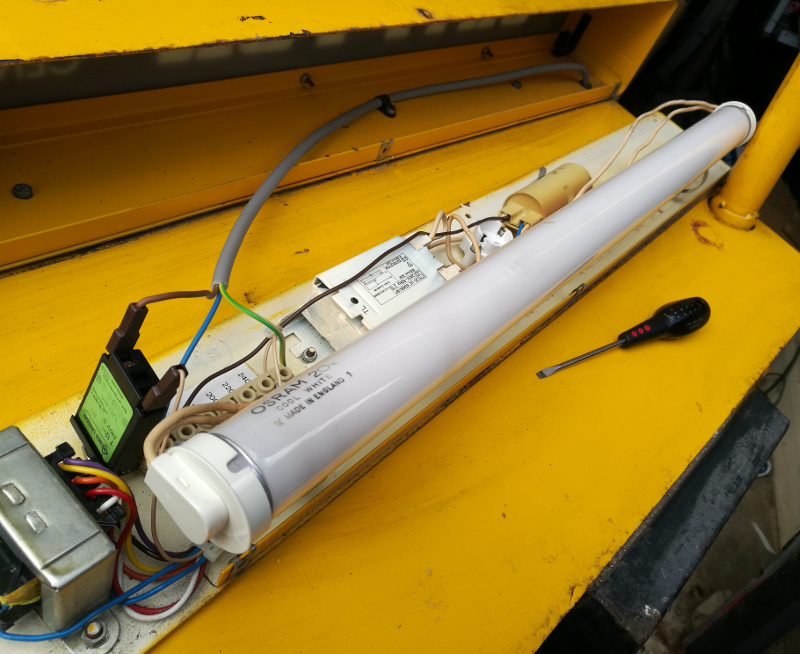 Forgot to mention earlier, got the user guide and faultfinding manual with it as well as a bunch of vehicle data - quite happy to dig info on relevant vehicles to this forum out of these if it would be handy. 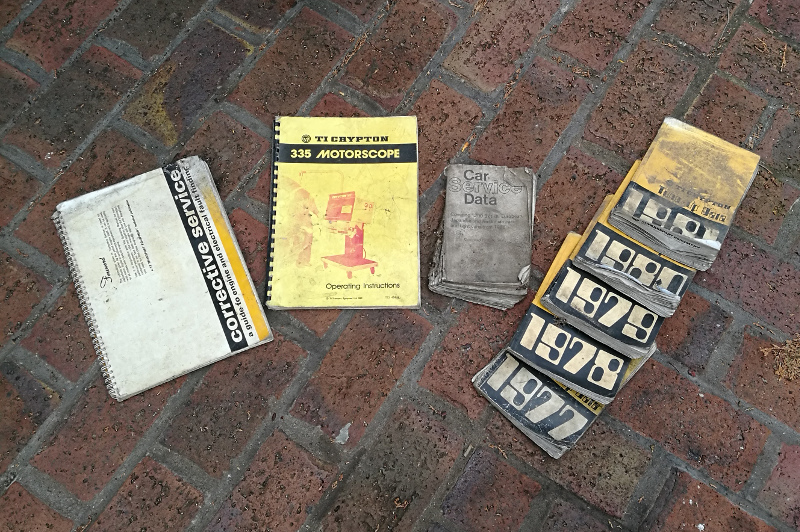 In person it's actually really hard to tell that these buttons actually aren't illuminated (the camera has really washed the colour out - especially the orange). As someone who greatly enjoys nicely engineered things they are really quite a joy to behold. Do wonder how much they added to the overall cost of the unit though! 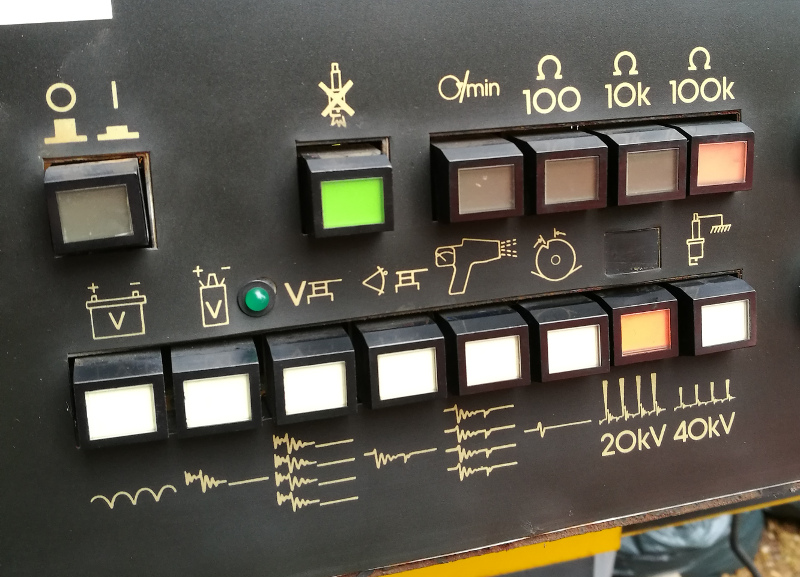 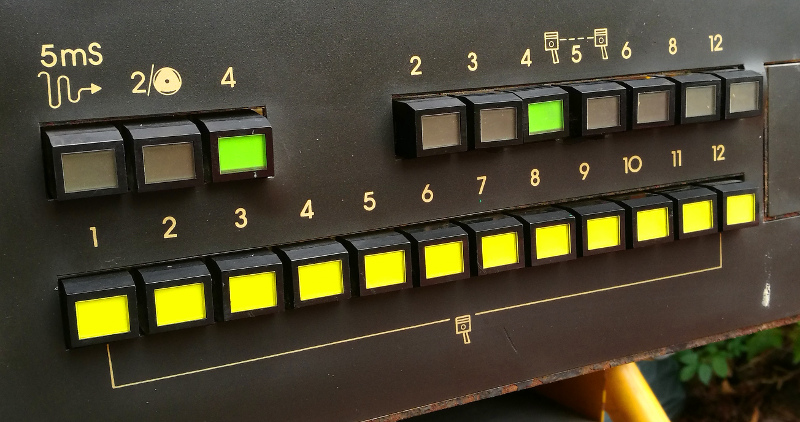 ...Should really try to get hold of an old flipdot bus destination blind or something and make a clock for the garage or something out of that...
Top

I love those yearbook Zel, the fonts are just so 70s!!!
Top

The diagnostic equipment looks a good bit more sophisticated than the vehicles it was built to connect to!
If you want that fluourescent tube to last another half-century, whip out that starter and fit an Arlen Pulsestarter instead (wonderful devices), although probably 2/10 for originality.
I have one or two electrical bits and pieces here going back to 1920s and '30s; should I post a pic or two?
Top

white exec wrote:I have one or two electrical bits and pieces here going back to 1920s and '30s; should I post a pic or two?

Won't see any complaints from me!

Also, first thing I did when I had the covers off was stick a pair of Arlen EFS600 pulse starters in there. Only fluorescents I have here without them are those without starters.
Top

So we've been on the lookout for suitable transport here for a while for both bikes when we go on holiday and a large dog frequently to get to communal walks and such. Had been looking to do a deal with a guy up north to secure a Lada Riva 1.5E Estate, but he seems to be backing out...

It couldn't just be some generic eurobox but needs to be a bit more oddball...so tomorrow I hope to be going to take a look at and possibly add a 1994 Jeep Cherokee Limited SE to the fleet. Yes, 4.0 litre straight six and all.

...I make no attempt to hide the fact that I have a soft spot for Americana, and this was the last version before they really started to Europeanise the Cherokee.
Top

Why not a roof mounted bike carrier Zel? Saves the aggro of getting yet another motor vehicle and these days there's some very good ones about...

I'm lucky, both of mine will slip in the back of the Xantia with the back seats folded...

Look for products from Thule such as these
Top
Messages: 5148