place a long spanner ( i think either 15 or 16mm ) on the bolt in the center of the pulley, not to undo the bolt but to lever the tenssioner back till you can fit a locking pin into the hole along side the tenssioner body top lock it off tension,

unless you can get a long knuckle bar with a half inch to 3/8th reducer on into the square hole on the tenssioner arm, this is very very tight for space as you need to get the knuckle bar between the chassis rail and end of the engine
Top

That sounds like fun...will see if I get time to look at it tomorrow.

Really should have this moved to the blogs section as that's what it's turning into...

107 went in for its MOT today and came out with a clean bill of health despite having 16K under its belt since the last one.

Afterwards went to get the wheel alignment sorted as I knew it was out and to get the air con recharged. Wheel alignment sorted okay, but the air con failed the leak test...we had a pome around at the station but couldn't find any obvious leaks. Will pull the bumper off at the weekend so we can get a proper look at the condenser (and so I can properly clip the offside bumper back on anyway).
Top

Zelandeth wrote: Really should have this moved to the blogs section as that's what it's turning into...

...Addendum to this, I thought for laughs I'd take the Xantia in as well to see whether the A/C was anything vaguely resembling gas tight. Given that the car ticked over 199K yesterday I wasn't expecting much.

Well surprised by that result!

Edit: I'll probably edit the topic later on when I can think of how to word it, to have a more relevant topic given that it's now officially become a fleet maintenance blog for my 107 and Xantia.
Top

Zel, excellent on the 107 and the Xantia

Been hunting today and have come to the conclusion that 107 condensers are anything but cheap, around a hundred quid seems to be the going rate for a new one, and given how vulnerable to damage they are I wouldn't really want to risk a used one. Fingers crossed the hole in the current one is small enough that I can just braze it up so won't need to fuss with replacement anyway...

Had the Xantia out for a brief run today and can confirm that the ac is still bloody cold...to the point that I actually had to set it to 18 degrees rather than just "cold" because it was too cold!

Just waiting for my aux belt tensioner to arrive so that I can finally look at getting the timing belt done. Hoping that tomorrow or at the weekend I'll have a chance to go hunting the whining noise and pin it to one of the tensioners or alternator.

The occasional rattle has now been pinned to the ac compressor clutch I think - simply because it stops the moment the compressor kicks in. Haven't actually poked that yet other than playing with the button and listening at the traffic lights.

Oh...and to try and re-seal the boot and investigate why the boot light does not work...which will bring my gremlin list down to the one dodgy fan and some lights in the dashboard...that can't be right surely!
Top

Sounds like condensers for C1s are like inkjet cartridges Zel, cheaper to replace the whole car when they fail

Good news on the Xantia.. Honestly, after a good bit of work they can be fault-free and for a fair while too. At least a day

Not like my Saab then - which always had *something* wrong with it, though very seldom was actually broken. Well...still isn't, just lacking in an MOT at present and an alternator which you don't have to thwack with a screwdriver to get it to start charging...which I reckon is just needing a new set of brushes.

Hoping to get it booked into the garage next month at some point to get a definitive list of what I need to do for the test.

Then I need to make the really difficult decision of which vehicle I need to sell. One of them needs to go...Skoda, Saab or Xantia. Problem is that I really, really don't want to sell any of them!
Top

What kind of Skoda is it?

As far as I'm aware, the last remaining 120LX on the road in the UK.
Top

As far as I'm aware, the last remaining 120LX on the road in the UK.

Is it this colour? 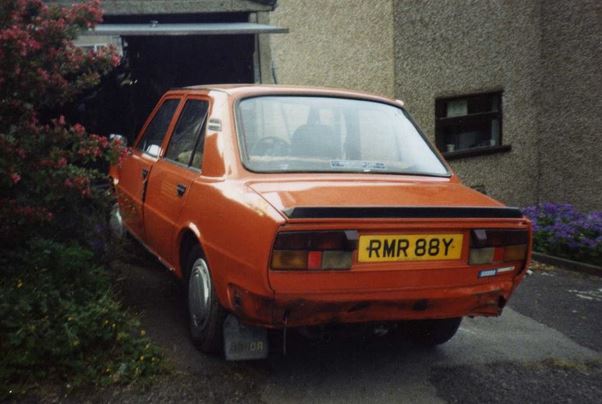 If you ever decide to sell the Skoda... let me know!
Top

Think this is the slightly darker and more reddish orange than that, the official name being Rowan Red as I recall. 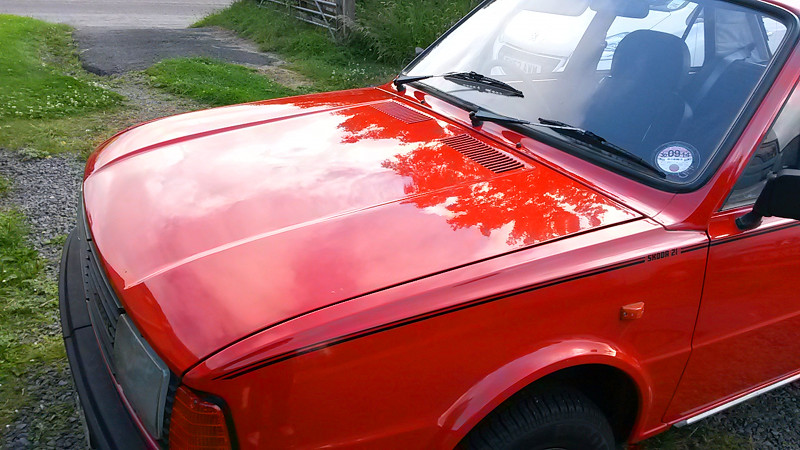 I've driven quite a few exotic cars over the years - but I have never encountered one which gets as much attention as this...the real surprise is how overwhelmingly positive that attention is these days. The jokes by and large seem to be in the past these days.
Top

That's gorgeous. Mine was never that good, and sadly I never got to go in a good one. I'd love something like that as a keeper. Mine was also only a 4 speed, but I once had it indicating 100mph.
Top

This one has a number of issues that I need to address at some point. Not least the head gasket (most likely we reckon caused by the previous owner not having the sense to replace the stuffed radiator cap), which has been on the to do list for too long, and replacing all the rear suspension bushes as they're showing their age.

I'm sort of hoping that sorting the head will put an end to its tendency to do an audibly passable impression of a shotgun when you come off the throttle after a long period of hard acceleration accompanied by spitting flames out the tailpipe. ...somewhat hope as well that it doesn't sort it as it's a fantastic and hilarious anti-tailgating device...

Indicated is a very important word with Skoda speedometers. Showing 70 on mine when I was driving down from Aberdeen I was still being overtaken by coaches on the motorway, and I know they're limited to 62mph.

It's not *quite* as bad as the speedo in my Rapid which I remember showed about 45mph when you were doing 30 and only got worse the faster you went.
Top

So, today I set about pulling the nose off the 107 so I could investigate the complete lack of refrigerant in the A/C system. I can now report that getting the bumper off the 107 is in fact far easier than it looks. No invisible bolts or anything, just a few bolts then the clips on the wings pull out. Well, one of them did, the one on the driver's side in my case was in pieces following an incident in the Autumn so I'll need to find a replacement.

There is an obvious oily patch on the condenser, though no obvious hole. I'll get it cleaned up a bit at some point in the next couple of days and examine it more closely. Fingers crossed it will be accessible and just a pin hole that I can easily enough patch with a bit of brazing.

However, it was immediately apparent when I pulled the bumper off that there was another problem that needed attention. There was an obvious pink powdery residue all over the front crossmember. Kneeling down and looking at the radiator, this is what I saw. 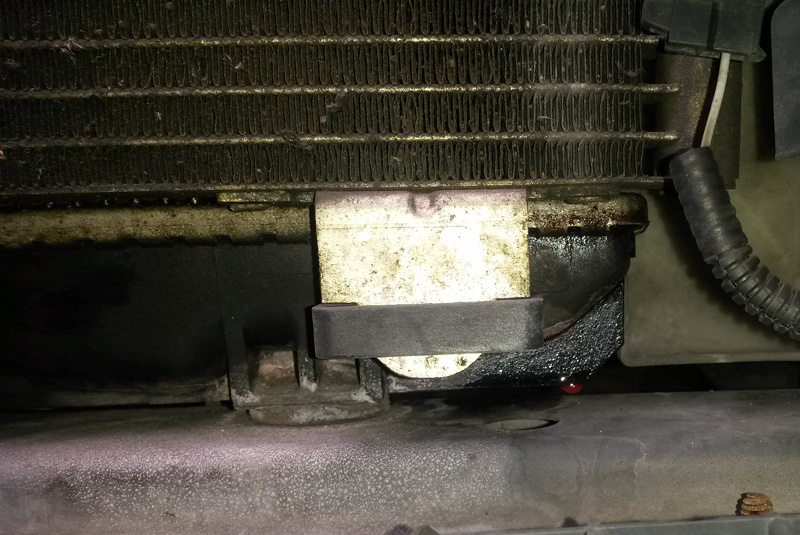 I've said it before, and no doubt will again, I HATE these stupid plastic tanked radiators! Almost every car I've owned with them has needed it changed at some point when one of the core to tank seals failed, as appears to have happened here. Spare is sitting in the corner for when the Xantia inevitably has the same happen. The fact that the radiator in the 107 is within two inches of the catalytic converter probably doesn't help.

On the plus side...the A/C system is already evacuated, and I'd need to take the condenser out to change the radiator anyway...Plus given where the leak is and that it's completely invisible until the bumper is removed I could see me spending rather a lot more time trying to figure out where the coolant was going (it's been using a tiny amount for a few months now). It never actually gets as far as the ground, nor to anywhere that is visible from outside, so I had been starting to worry about the head gasket.

Also had the first chance to see what damage the incident back in the Autumn caused. This happened when one of the many potholes on the A34 caused a lorry going in the opposite direction to shed its wheel trim - which then came careering across the carrigeway straight into the front of the 107. So, what did it do? Made a right old mess is what it did!

In terms of visible damage that was limited to a scuff on the bumper, a shattered number plate and some of the stainless steel mesh on the grill popping out, the fog lamp blanking plate disappearing, oh...and the little silver cover for the towing eye vanishing.

What you can't see though is how much of a thump the poor car really took. Looking down at the lower front crash structure tells the story rather better I think. 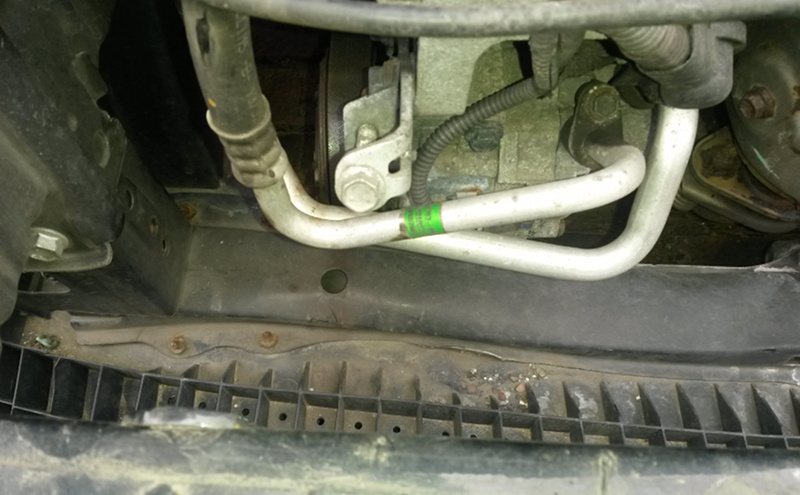 While I can see that the crossmember there appears to be a bolt on section, I'm pretty certain that the turret on the offside has been twisted back slightly as well, so am by no means sure that a replacement would fit. Nor to be honest whether it's worth worrying about...though I do know it's going to annoy my sense of OCD no end.

Once the new radiator arrives, the entirety of the void behind the bumper will be getting a good dose of Dinitrol to prevent rust in the future as there is a bit of surface rust in a few places.

Does anyone have a diagram showing the part numbers of the various bits of plastic and clips associated with the bumper on the 107? I've got quite a few bits of broken/missing plastic that I think I'm going to need to order!
Top
Messages: 5148