So apparently BT were doing maintenance on our voice line last night. Not really surprising given the deluge that was dumped on the area yesterday to be honest...

I know this because it resulted in numerous momentary interruptions in the phone service. I know that, because every time it detects the line has gone down, our intruder alarm freaks out. Gives the usual 30 second warning klaxon inside before triggering a full alarm state unless I trudge all the way to the far end of the house, punch in the code and acknowledge the fault condition.

Annoying when it happens once. However when it happens a dozen or so times over an eight-ish hour period starting just after midnight, downright infuriating! If it weren't for the huge chunk it takes off our contents insurance the thing would be in the process of getting ripped out about now, especially given that we already have a large dog with free reign of the house at night. Reckon he is a far better intrusion detection (and discouragement) system anyhow...

Blarg...had planned to get a few things done today, probably not now! Going to go and flop in a dark corner and expend as little energy as possible.

If Central MK suddenly disappears in a bright flash followed by a mushroom cloud, you'll know that the alarm went off again!
Top

It was a heck of a storm though, wasn't it!
Top

Epic? It was beyond epic. It was biblical! Noah started to think it might be a good time to build the S2 Ark.....
Top

I've seen worse, but not since I moved down here!

We had a lightning strike in the Local Centre here, literally a couple of hundred feet from the house. Watching out the front, usual rumbles etc in the distance before the inevitable blinding flash and almighty bang. Had a great deal of fun while the storm was approaching watching the lightning activity in real time over here. The tracking it does of the sound front is creepily accurate...

Our alarm system usually raises my blood presssure at least once every few months - and nine times out of ten it's at an unsociable hour of the night and sure enough is because it's sitting there flashing what to me is a dreaded message - "TELECOMS FAIL." I fully understand why it's set up to behave that way, but it doesn't make it any less annoying when it happens!

Been out just now and picked up a set of ramps so I can both sort out the rear silencer on the Xantia, and finally set about sorting the ride height...which has been on the to do list since November 2014 when I bought it! Will also make future application of rust proofing and such to the rest of the fleet easier.
Top

So, over the last few days I've spent what feels like a small fortune on the Saab!

Two new tyres on the front, front exhaust section to be fitted as soon as it arrives at the garage, new front pads (as it was spotted they were getting very low when the tyres were done - not surprising as they've been on there since I got the car), and given that corrision on the brake hose ferrules has been an advisory item on every MOT since I got it, I figured it's time to actually change them. All in all, that's been the best part of £350 in a couple of days! Still, MOT is up in a couple of weeks so seems for the best to get it in there with some nice shiny bits on it.

Also got the Xantia up on the ramps this morning (fun game that as our driveway is smooth enough that they don't like staying still while you're trying to back the car onto them), and eventually managed to wrestle to back box off. Ended up having to cut one of the hangers as it just would not let go, and being close enough to the hydraulic pipework I didn't want to be too violent with it!

As suspected, the box itself is just fine, and it's just sheared away where the joint attaches to the stub as they always seem to. 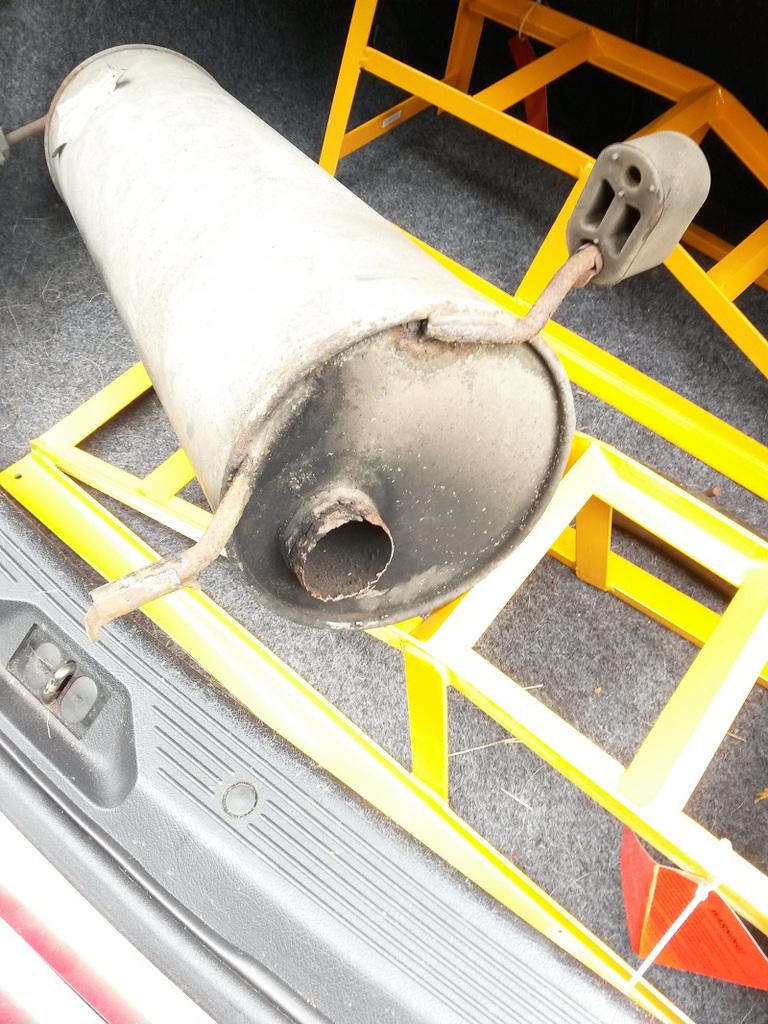 Looks to have a 2006 production date on it though, so assuming it didn't spend an excessive amount of time on the shelf hasn't had too bad a run!

Have looped some wire around the pipe for now to stop it from rattling around while I decide what to do with it long-term as at first glance they ain't cheap.
Top

Managed to order the wrong air filter for the Saab didn't I...Got the one for the 16v rather than the 8v engine. Oh well, ECP had one in stock (I don't usually use them given the messing around I've had with them in the past regarding the wrong parts being supplied etc) so no major disaster. Had forgotten what a faff of a job it is to change though given that the fuel metering unit is attached to the lid of the air cleaner and that there isn't quite space to get the filter element out between that and the housing so you have to detach the housing from the inner wing first then you can just about wiggle things around enough to get the filter out.

Cleaned up the air metering flap and throttle butterfly and such while I had the intake hose off as it seemed silly not to and it hadn't been done in quite a while so was in a bit of a state.

Irked to discover that my spare indicator switch has exactly the same fault as the one on the car - the main beam function doesn't work...so need to find another one now...
Top 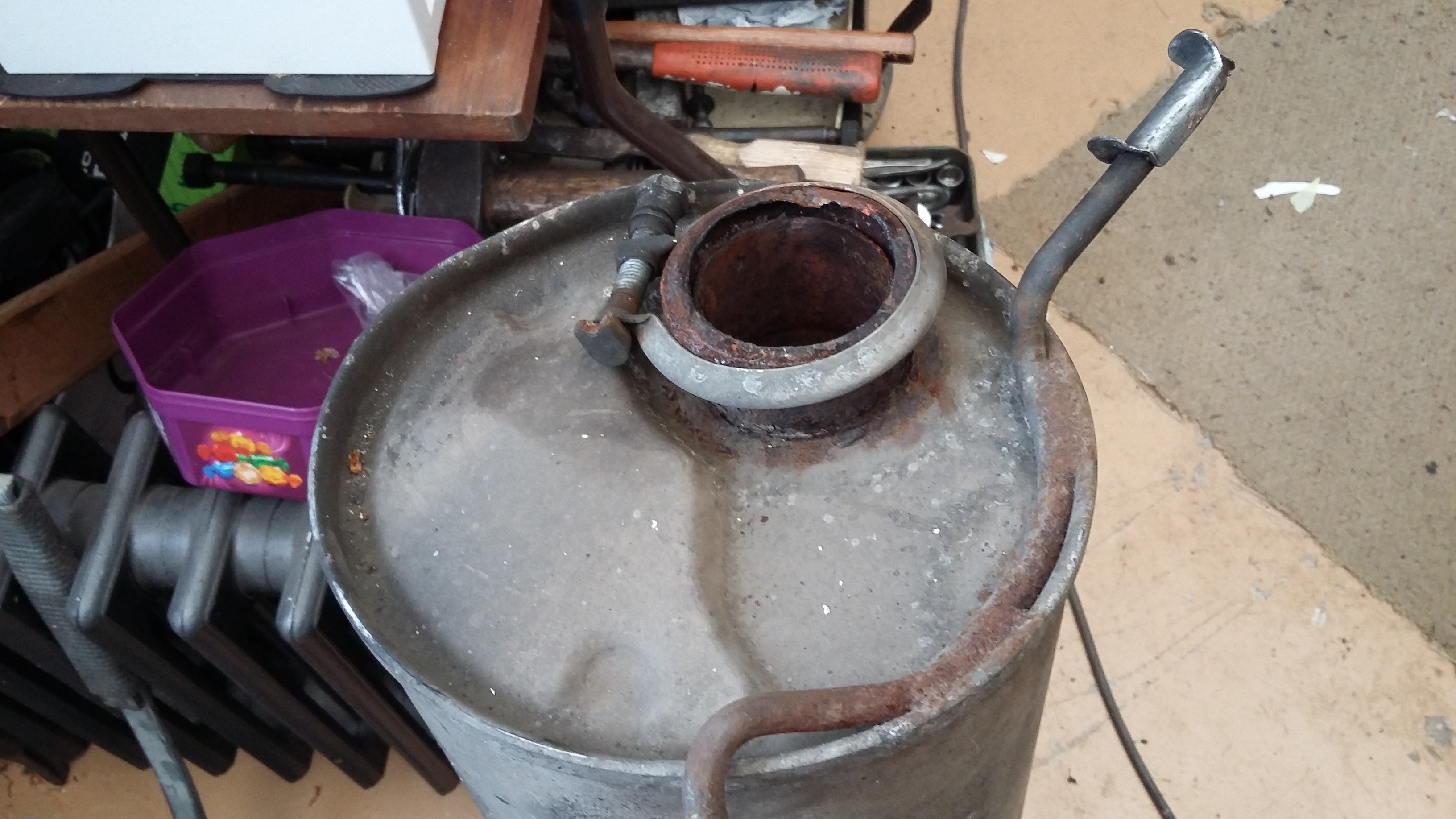 Yep, seems to be where they always fail. At least mine snapped on the silencer side rather than the pipe side. That's the only failure point I can remember ever coming across back at the garage too, don't remember ever seeing a box actually blowing, always shears off at the joint. They're not cheap those boxes are they? Think I need to get creative...

Speaking of expensive, it ain't half expensive importing stuff these days...Looking at getting some stuff sent over from the US shortly, and a £250 order suddenly ends up being near as makes no odds to £400. It grates supremely that I'm going to be paying VAT and import duty on the cost of not only the item iteself but also the shipping. The term "double-dipping" springs to mind...

Guess the aim there is to try to get people to buy local...doesn't always work though as that's not always an option!

Blah...that's my random and pretty much pointless rant of the evening I guess!
Top

Zelandeth wrote:
Also got the Xantia up on the ramps this morning (fun game that as our driveway is smooth enough that they don't like staying still while you're trying to back the car onto them), and eventually managed to wrestle to back box off. Ended up having to cut one of the hangers as it just would not let go, and being close enough to the hydraulic pipework I didn't want to be too violent with it!


Although I've never tried it, apparently a dodge to get around the ramps shifting whilst driving onto them is to cut a couple of bits of old carpet (or similar) about 6" wide by 2' or so long, loop them through the bottom tread on the ramps so that your tyres run onto the carpet first before running up the ramps, and so stop the ramps riding away.
Top

Reckon next time I'm just going to stick the rug down and put the ramps on that (I've got a huge scruffy old rug that I usually stick down to make things a bit more comfortable, just forgot yesterday!) and hopefully that will resolve the projectile ramp issue. Our old driveway was gravel so it wasn't a problem I was used to or ever thought of until the first time one of them went scooting into the hedge.
Top

Today I actually got to take the 107 out for a half decent drive. Seemed to be wandering slightly on a straight road, so headed straight over to F1 in Newport Pagnell to get the wheel alignment checked. Sure enough it was a little out, nothing drastic but out. Also confirmed while I was there that the exhaust for the Saab has finally materialised after a certain amount of poking of the supplier (apparently the system for the 8v engine is getting hard to find now) so should be able to get that fitted tomorrow.

Have got a replacement indicator stalk for it on the way as well as it turned out that the replacement that I had for the first dodgy one I had was suffering exactly the same problem as the first one - namely that the main beam contact was dead. So hopefully I should be able to actually get it in for the MOT this week...Have also got a full set of brake hoses here waiting to go on if I ever actually get a chance.

Ordered the new head gasket for the Skoda as well so I can actually make a start on that - though I'm having a devil of a time trying to find head bolts...Don't particularly want to re-use 30 year old head bolts...
Top

Should have popped in Zel, I was home most of yesterday and was at F1 myself twice yesterday getting new tyres on Sian's Pixo...

Top place, they repaired a puncture for me gratis last week

We were joking yesterday that I should have my own bay in the corner soon with how often I've been in lately!

Just parked up now waiting to get the exhaust sorted. Hoping to save the straight bit of pipe to use to bod...I mean fix the exhaust on the Xantia if possible.
Top

No good coming to see me today Zel, I'm in London for a day out....

Going to visit the science museum in a bit...
Top
Messages: 5228